Macro headlines drove the trading action this week. On Wednesday, the Bank of England lowered its 2019 growth forecast to 1.2%, which would represent the worst performance in a decade. The European Commission also cut its target for 2019 growth in the Eurozone on Thursday, to 1.3%.

Elsewhere, reports circulated this week that President Trump would meet with North Korea’s Kim Jong Un later this month. However, volatile trade talks with China took a turn for the worse and Trump said on Thursday he will not speak with President Xi before a looming deadline on March 1, for increased tariffs on Chinese imports.

One reaction to the global news this week was a rally in the U.S. Dollar. There are several potential effects of a stronger dollar; but one that hits home for investors, is that domestic companies tend to report lower earnings, since more than 50% of the profit reported by companies in the S&P 500 is actually generated outside of the U.S.

Speaking of earnings, Chipotle Mexican Grill (CMG) was the big winner this week, gaining 11% the day after posting solid quarterly results. Mattel (MAT) was another double-digit earnings winner in the consumer sector.

On the other hand Tapestry (TPR), known for its Coach and Kate Spade brands, and Electronic Arts (EA) each lost about 14%, after announcing disappointing numbers.

Looking ahead to next week, there will be another full slate of quarterly reports: 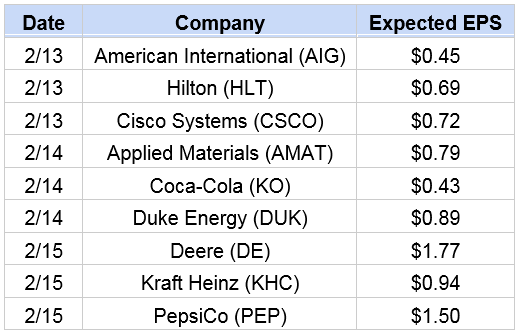 Traders on Inflation Watch Next Week

On the economic front, U.S. investors will be keenly eying two inflation reports next week. First, we’ll get a look at core consumer prices for January, which are expected to have increased 0.2%. Thursday brings the producer price index, where the core rate is estimated to have fallen by 0.1% last month.

In less than two months, the consensus outlook has quickly shifted from two or three interest rate increases from the FOMC in 2019, to traders factoring in a larger probability of a rate cut than a hike this year.

However, any sign of price inflation could spook investors into believing that Chairman Powell and the Fed could again resume their hawkish ways.

U.S. stocks have largely recovered from the vicious losses we experienced in late 2018, but uncertainty both at home and overseas will likely continue to hang over the market.

This can be especially troubling if you’re nearing retirement or already retired. All you really care about is generating consistent income and protecting your hard-earned nest egg– not whether a company misses earnings expectations by a few pennies, or there’s political trouble brewing thousands of miles away.

Thanks to his work, you no longer have to settle for low bond yields, or stocks like Tapestry that can fall as much in one day as they pay in three years of dividends.