5 “Correction-Proof” Yielders: They Go Up When the Market Goes Down

This bull market is ten years old and stocks at large are richly valued. No wonder the last few weeks have been scary for some, who haven’t seen a real bear market in a very long time. Should we take our cue from the recent pullback to sell some positions, hunker down in cash and “wait things out” for a bit?

Absolutely not. First, it’s very difficult (and really, impossible) to know when it’s time to “get back into stocks.” Hulbert Financial recently ran the numbers for Barron’s on the advisors it monitors. It focused on the best “peak market timers” – the gurus who correctly forecasted the bursting of the Internet bubble in March 2000 and the Great Recession in October 2007.

These were the clairvoyant advisors who had their clients out of stocks and mostly in cash as the S&P 500 was about to be chopped in half. Surely their clients did great over the long haul, given their capital was largely intact at the market bottoms, right?

Wrong. None of these advisors turned in top performances. The reason? While they were good at timing tops, they were terrible at timing bottoms! The bearish advisors didn’t get their clients back into stocks anywhere near the bottom. They had their capital intact, but they didn’t deploy it – and they largely missed out on the epic bull markets that ensued these crashes.

To reap rewards from stocks, we have to stay in the market. But that doesn’t mean we have to buy companies that trade with the S&P 500. In fact we’re better off following my favorite trading tip for down markets:

Pay attention to the “green on the screen.”

Green tickers, of course, are those that are up. They are rare when broader selloffs occur as they did last week. Which makes green an important sign of relative strength. These strong stocks are more likely to stay strong going forward, especially when they are cheap with respect to their dividend growth.

Focus on the Green, Not the Red 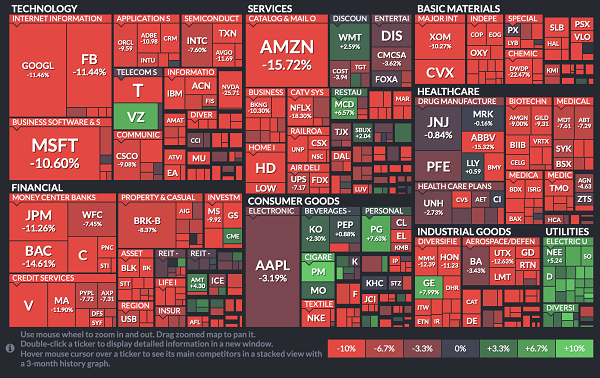 So let’s look at a few dividend stocks that are working when everything else isn’t. We’ve got a few buys, and a few more “sell highs” – let’s sort out which is which.

Blue-chip fast-food titan McDonald’s (MCD) isn’t just rallying against the bears – it is on the verge of all-time highs.

McDonald’s was actually having a mediocre 2018, and was underperforming the market until just the past couple of days. I mentioned in August that MCD had suffered with struggling sales thanks to lackluster results from its $1-$2-$3 Menu. That, and a lust for growthier stocks, mostly kept investors from really piling into McDonald’s at any point this year.

But look who came crawling back when the market sank.

When the Going Gets Tough, Investors Get McDonald’s (MCD) 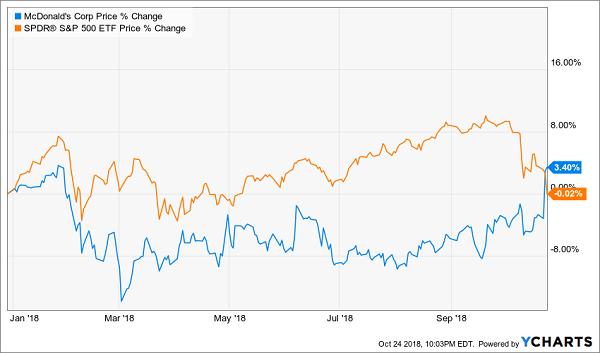 Carter Worth, head of technical analysis at Cornerstone Macro, recently told CNBC that while “you could say (McDonald’s is) discretionary … in many ways it’s the world’s cafeteria. It’s the cheapest meal you can get, and so that is a defensive element.” So while McDonald’s actually has been a very good long-term growth play, it’s this element that also makes MCD the kind of dividend-paying security blanket you simply have to hold in rocky markets.

The yield isn’t great, but the dividend growth is. I highlighted McDonald’s in a list of soon-to-be dividend raisers a couple months ago, and MCD did the deed with an impressive 15% hike in September, notching its 42nd consecutive payout hike.

This has to be a screaming deal, right? An 8% yield from Tupperware (TUP) – a well-known name brand that sells a product that millions of households use. What’s wrong with that?

Plenty, in this case.

Back in February, I pointed out that Tupperware’s yield at the time had shot toward 5% for all the wrong reasons – shoddy earnings scared investors out to the tune of 20% in just a few days. The dividend seemed in clear danger, and the stock looked too risky.

Update: Tupperware (TUP) Got Even Worse 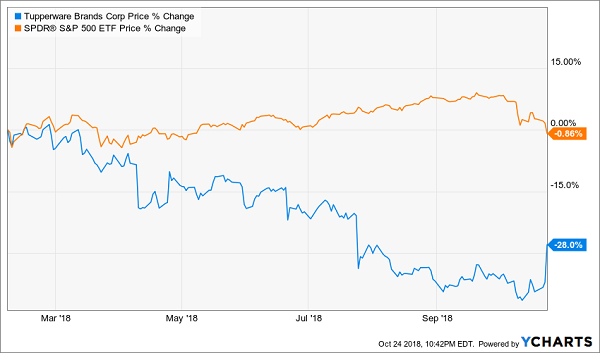 So why, then, does Tupperware seem so resilient against this market shakedown?

In short, Tupperware cleared a limbo-low third-quarter bar recently, and a little good news from this loser went a long way. TUP reported a roughly 25% year-over-year earnings pop and beat on both the top and bottom lines.

That’s the good news, but there were a lot of other ugly numbers in this report. Namely, third-quarter sales dropped 10% overall – that included a great deal of suffering from currency issues in emerging markets, but even backing that out, EM growth was just 2% year-over-year, and established-market sales declined 11%. And while earnings appear to be on the mend, cash flow remains problematic.

The news for Tupperware has been so bad, for so long, that I’m not surprised at this quick bounce against traffic. But Tupperware is fighting serious growth problems, as well as emerging-market economic difficulties, that should weigh shares down from here.

National Retail Properties (NNN) is having itself a good year in general. The triple-net-lease real estate investment trust (REIT) has climbed almost 9% this year – not just better than the now slightly negative S&P 500, but crushing the 5% losses for the broader Vanguard REIT ETF (VNQ).

And unlike Tupperware, the buying interest in National Retail Properties is simply a good ol’ flight to high-yield quality.

National Retail Properties is a single-tenant operator in the retail space, and a diversified one at that – no single tenant makes up more than 5.6% of its base rent. Companies leasing from NNN include the likes of 7-Eleven, Mister Car Wash, Camping World, LA Fitness and AMC Theaters (AMC), not to mention chains such as Chuck E. Cheese’s and Frisch’s Restaurant. That’s not exactly a lineup of Amazon victims.

The last time I discussed NNN, it was coming off a big first quarter that included a 12% jump in adjusted funds from operations (FFO) and increased full-year guidance. Q2 saw another improvement of 5% to 68 cents per share – so better YoY and QoQ. And a few weeks prior National Retail Properties announced a 5.3% improvement to the dividend – its 29th consecutive annual increase.

That kind of dependability and a 4%-plus yield look awfully good when you’re running for cover.

Barnes & Noble’s (BKS) double-digit gains over the past month are certainly enough to catch some eyeballs, but if you think that’s because B&N found a way to make their brick-and-mortar operations profitable … well, think again.

The company announced on Oct. 3 “a formal review process to evaluate strategic alternatives” for itself, which is a fancy way of saying it’s looking to sell the business. B&N did so amid interest from multiple parties.

That’s it. Barnes & Noble simply got juiced up by some M&A excitement.

The company announced that the same day it released its annual report, which disclosed a 5.4% drop in full-year store and overall revenues. Total sales have been on the decline since 2012. Meanwhile, B&N hemorrhaged $1.73 per share … yet somehow managed to pay out 60 cents per share in earnings.

Barnes & Noble (BKS): Read the Writing on the Wall 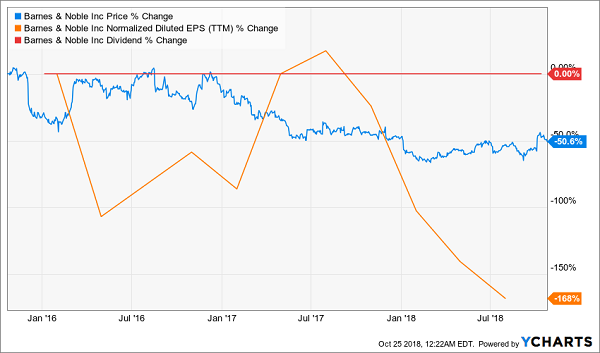 Warren Buffett isn’t exactly known for his adoration of REITs, which makes his 9% stake in STORE Capital (STOR) stand out all the more.

“STORE” is actually an acronym for “single-tenant operational real estate.” It’s a high-quality net-lease commercial property REIT that has a diversified roster of many smaller retail properties. Its 2,084 properties are leased out to a whopping 412 customers in 49 states, accounting for 109 industries. Its top five tenants only account for 12% of base rent, which is as small as it gets.

Also important is that STORE Capital is much like NNN in that many of its clients are Amazon-proof – in fact, more than 60% of rents are derived from service providers such as Zips car washes and Cadence Education early-childhood education centers.

STORE has been a solid dividend grower for years, and investors have rewarded the company with commensurate buying. Importantly, STOR also is a responsible payer, typically sitting at an FFO payout ratio of about 70%, which lets me sleep easy at night. 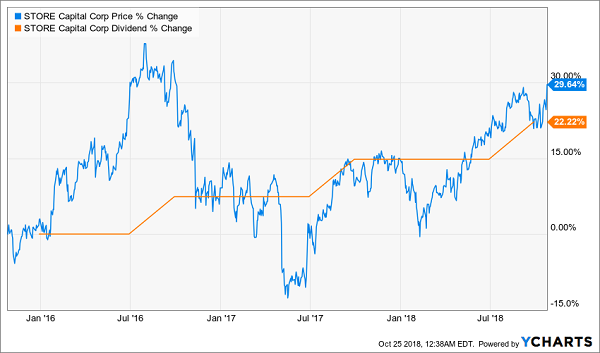 Safety is the name of the game in this turbulent market, which is exactly why investors are clinging on to dear life in slow-growth stocks like consumer staples Coca-Cola (KO) and Procter & Gamble (PG). They’ve chugged along for years, so surely they can squeeze out a few more percentage points … right?

But you can do better than the ho-hum yields in these tired blue chips. A lot better. In fact, I haven’t been this excited about an income opportunity in years.