If you’re like most people, you probably think it’s tough to find a fund that’s had a great 2018, especially since recent volatility has brought pessimism back in vogue.

But you’d be wrong.

Truth is, a lot of funds are doing well, with over 400 up nearly 5% or more so far on the year. The top performers share 3 common themes that could tell us a lot about which sectors are poised to take off next year.

Let’s dig in. Along the way, we’ll hone in on 13 funds cashing in as these breakthrough trends head higher.

Investors tend to get scared of healthcare and biosciences stocks during times of broader market unease, but every once in a while they ignore the panic and focus on the lifesaving innovations this sector can provide.

Right now is clearly one of those times. Despite recent market panics in the broader sector, there is one clear trend: healthcare, after starting off 2018 on a shaky footing, is back with a vengeance, and these funds are crushing the competition.

That’s why the Invesco S&P SmallCap Health Care ETF (PSCH) is the biggest fund winner of 2018 so far, though many other healthcare funds have clocked impressive returns, too: 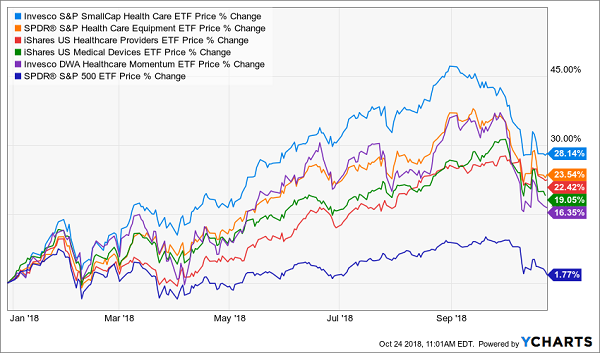 If you missed the health care wave and want to jump in, PSCH, as well as the SPDR S&P Health Care Equipment ETF (XHE), the iShares U.S. Healthcare Providers ETF (IHF), the iShares U.S. Medical Devices ETF (IHI) and the Invesco DWA Healthcare Momentum ETF (PTH) have all crushed the market, with 21.9% average returns for 2018, even before we hit Halloween!

These funds are strikingly similar, focusing on the healthcare sector broadly (which includes everything from medical equipment to drugs and hospitals), though XHE and IHI are the exceptions as a device-only pure plays. What they have in common is a belief that many innovations in pharmaceuticals and healthcare are starting now—and there are identifiable companies that will profit.

It’s no secret that tech has been struggling this year—especially the big names. Google (GOOG) is up a measly 4% (less than the S&P 500), with a lot of its gains disappearing in the last few weeks. Even worse, controversy-plagued Facebook (FB) is down a whopping 13.9%, which has put FAANG in a tight spot.

Not all of FAANG is suffering, of course. Netflix (NFLX) is up an unbelievable 68.8% for 2018 and Apple (AAPL) has clocked in an impressive 29.9%, becoming the world’s first trillion-dollar company and staying there. And, of course, Amazon (AMZN) is close on Apple’s heels following a 49.6% run-up in 2018.

What does this divergence tell us? That tech is still a winner, but the “dumb” FAANG index (which never made much sense to begin with) is not a winner. Instead, we need to take a more strategic approach to tech.

That’s what we’ve seen with three ETFs, the SPDR S&P Internet ETF (XWEB), the Invesco Dynamic Software ETF (PSJ) and the iShares North American Tech-Software ETF (IGV), which have given investors some of the top gains for the year (XWEB is the second-best unlevered ETF of 2018): 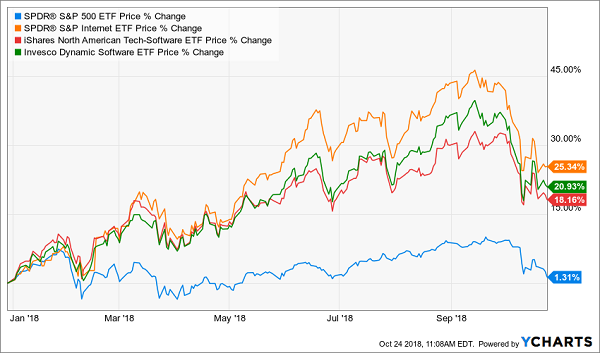 Considering XWEB’s name, its strong showing considering Facebook’s struggles is surprising. But XWEB is actually underweight Facebook relative to many smaller and strong-performing web-only names like GoDaddy (GDDY), Interactive Corp (IAC) and Match Group (MTCH), which have all been leading while Facebook has been trailing.

Similarly, PSJ and IGV, which focus on software companies that provide the backbone of the digital world, have been crushing it while the investors focus on Facebook’s woes. That “sleeper” return shows that investing in tech is still a winner, even when FAANG isn’t as strong as it once was.

Oil has been a dud for years—since the 2014 crash, it’s struggled to get over $60 a barrel. That is, until this year. 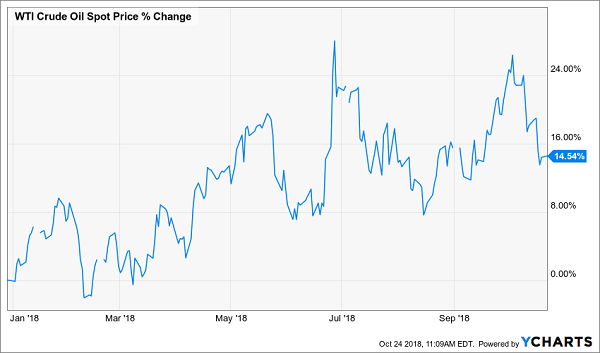 It’s a welcome change for commodities traders, and a lot of ETFs have also been on the winning end of this trade.

While each of these has a slightly different focus, with USO, BNO and USL being plays on futures directly, while OILK and DBO focus on oil producers, their returns are correlated enough to oil to make one thing clear: investing in energy in 2018 was the right move.

Still, investors need to be careful when they think about 2019. These winners are very different from 2017’s winners, and many of these funds were duds last year. So this year’s gains don’t necessarily translate into next year’s profits. But learning what won in 2018 tells us a lot about where this market is positioned for next year, and how a prudent investor can profit from market changes.

ETFs can work for your portfolio, but I’m not a huge fan of them right now, for one simple reason: most don’t pay meaningful dividends!

That goes double for funds in the high-flying tech world, which are focused on one thing at all costs: growth!

There’s nothing wrong with that, of course. But if you want to build a comfortable retirement, the cash you get from regular dividend payouts is too important to ignore.

Which is why I’m pounding the table on 4 other funds that are throwing off a fat 7.1% average dividend yield now!

That’s right: a payout 4 TIMES what the millions of folks sitting on the typical S&P 500 index fund are forced to settle for. And no, these 4 low-key picks aren’t ETFs: they’re a special kind of fund called a closed-end fund.

The upshot: these ignored funds give you the best of both worlds: fat yields—payouts of 7%, 9.5% and even 11% are common in the CEF space—and BIG upside potential.

Even better, all 4 of these winners are ridiculously CHEAP now. In fact, my team’s latest analysis points to massive 20%+ price upside in the next 12 months.

I’m ready to give you access to all of my research on these 4 powerhouse funds with no obligation whatsoever. Simply CLICK HERE to discover their names, tickers, buy-under prices and everything you need to know before you buy.