If you want to clobber the stock market – and double your money every two or three years – then buying companies with accelerating dividends is the easiest and safest way to do it.

And I’ve got good news for you: there are nine blue chip payers likely to raise their dividends next month. So why not “front run” this good news and consider these shares now?

The benefit of dividend hikes? Getting a fatter income stream is an obvious reason, but it’s just the start. A rising payout acts like a lever on a company’s share price, prying it higher and higher with every single dividend hike.

The pattern is plain as day in this chart of NextEra Energy (NEE), a supposedly “boring” utility that’s been quietly sending its shareholders bigger and bigger dividend checks over the past five years.

Look at how NEE’s stock has jumped with each and every dividend hike NextEra has delivered—and how its latest monster payout hikes have magnified those gains: 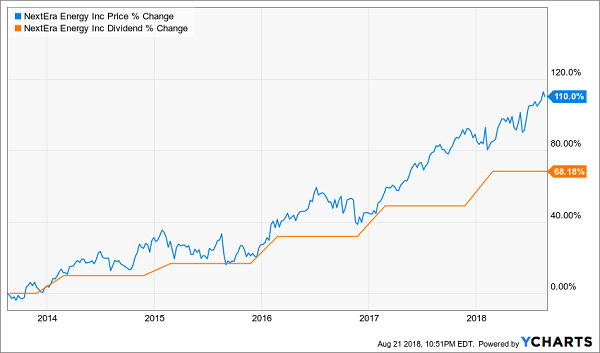 NextEra just delivered a 13% dividend hike earlier this year. But you and I can do even better by focusing on stocks that are due for a payout hike ASAP. Here are nine raise announcements we’ll probably see next month.

American Express (AXP) announced in June that the Federal Reserve gave its adjusted capital plan the green light. As part of that plan, American Express will buy back $3.4 billion in shares between Q3 2018 and Q2 2019, and it’ll boost its dividend by 11% to 39 cents per share – the company’s seventh consecutive year of payout hikes. The official declaration should come sometime in the final week of September.

Another feather in the cap for AXP, which has recovered from its Costco (COST)-sparked woes in 2016, rallying for nearly two years to its current all-time-high perch. 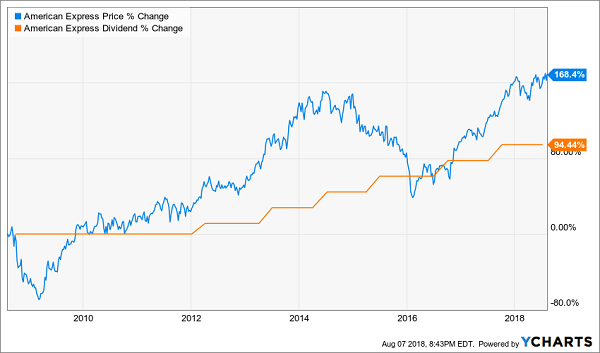 Microsoft (MSFT) is the poster child for what should happen with a faithful dividend-growth stock – as the payout expands, so should the stock price.

Microsoft’s (MSFT) Price Has Finally Caught Up With Its Dividend 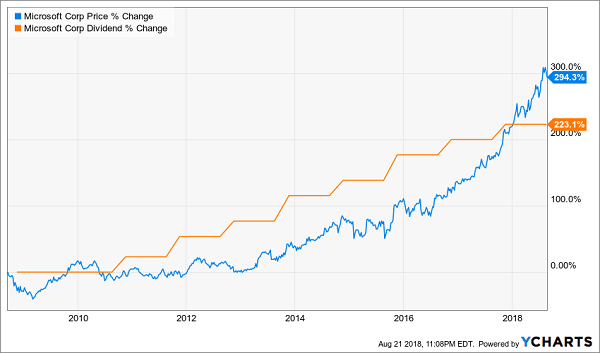 And come mid-September, the IT blue chip will likely announce its annual dividend increase.

Microsoft closed out its fiscal year with a boffo fourth-quarter report released in July, announcing 17% top-line growth, 11% bottom-line growth and better-than-expected profits and revenues. Better still, its fiscal 2019 guidance surprised to the upside. And even after cranking up capital expenditures to build out its burgeoning cloud business, Microsoft still generated $7.4 billion in free cash flow.

Microsoft has gobs of money. It could do with a significant payout bump – the yield has been crushed by a 145% run in three years (a wonderful problem to have, if you’re an existing shareholder) – on what would be its 15th consecutive increase. It also may be ready to update its $40 billion buyback program initiated two years ago.

Like American Express, JPMorgan Chase’s (JPM) next dividend increase is, ahem, money in the bank.

The Fed approved JPMorgan’s capital plan near the end of June, and that included an absolute whopper of a dividend-and-buyback package. JPMorgan will buy back an impressive $20.7 billion worth of shares between July 1, 2018, and June 30, 2019. But the real eye-opener is a 43% spike in the payout to 80 cents per share.

JPMorgan has been the cream of the big-bank crop over the past five years, doubling over that time as it has recovered and retooled following the 2007-09 financial crisis. JPMorgan has benefitted from (and will continue to enjoy the fruits of) continued economic expansion as well as a return to gradually rising interest rates … and shareholders aren’t being left behind. The stock has rocketed 120% higher over the past five years, and its dividend (including the expected hike, which should be announced in the second half of September) has grown 47% in that time.

JPMorgan Chase (JPM): One of the Best Big Bank Stocks 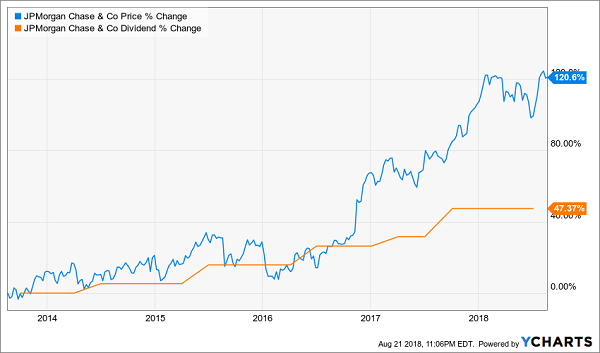 My readers should be plenty familiar with telecommunications infrastructure REIT American Tower (AMT), as it regularly shows up in my lists of dividend stocks to watch for payout hikes, so we’ll just do a quick check-up.

AMT isn’t setting the world on fire with a 6% year-to-date return. But when you look at the flat return for the Vanguard REIT ETF (VNQ), it’s clear this REIT is doing something right. And so it has! Second-quarter funds from operations (FFO) of $1.90 per share easily clubbed Wall Street’s expectations for $1.78. That came on revenues of $1.78 billion that also climbed over analysts’ estimates.

But American Tower’s draw is its impressive streak of 26 consecutive quarterly dividend increases – every three months since 2012, AMT has upped the ante like clockwork. Q3 should be no different, with the company typically making its announcement sometime in the middle of September.

Texas Instruments (TXN): A Chip Off the Ol’ Block 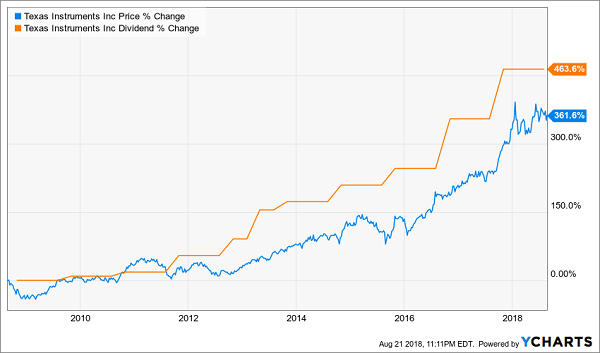 Texas Instruments is, in fact, increasingly focusing on cutting-edge technologies, including the Internet of Things, artificial intelligence and even blockchain – the tech behind Bitcoin. But its core business is the uninteresting but very necessary analog chips that power simple gadgets such as calculators and alarm clocks.

This one-two punch puts Texas Instruments in most of the devices in your house, your workplace – you name it. That has enabled this blue-chip chipmaker to explode like a growthy startup, all while fueling fantastic expansion in the dividend.

The next chapter in this dividend-growth story should come in mid-late September.

McDonald’s (MCD) smacked down the naysayers in 2017, showing that the world’s most ubiquitous fast-food chain still had gas in the tank with a red-hot 44% gain. But the Golden Arches have come back to earth in 2018, dropping 10% to make it one of the worst performers in the Dow.

But I can’t find much fault with the company. McDonald’s has posted earnings beats in both of its quarterly reports so far this year. Yes, same-store sales limped in a little bit for Q2, in part because the company’s $1-$2-$3 Menu hasn’t resonated the way analysts hoped it would. But I love the fast-food chain’s vow to become “more aggressive” on value and launch a “2-for-$5 mix-and-match” offering.

There’s little room for complaint on the dividend front, too. McDonald’s is a Dividend Aristocrat with 41 consecutive payout hikes under its belt – another raise, likely in the back half of September, would be No. 42. And MCD’s raises lately might not have been spectacular, but they’re decent, at about 25% growth since 2014.

No list of dividend-paying companies is truly complete without a utility stock, and that’s what we have in OGE Energy (OGE).

OGE isn’t as familiar as names like Southern Co. (SO) and Duke Energy (DUK). But its primary subsidiary, Oklahoma Gas & Electric (hence the OGE), serves more than 843,000 customers across Oklahoma and Arkansas. It also holds both limited partner and general partner interest in Enable Midstream Partners, LP (ENBL), which owns natural gas and crude oil infrastructure.

It’s also a little growth monster for the utility space. While the Utilities Select Sector SPDR Fund (XLU) is up just 2% in 2018, OGE shares have ripped off a market-beating 11% run. That came on the back of a stellar fiscal Q1 report that saw residential revenues grow 5.1% to prop up the top line by 8%, and a massive 50% pop in earnings to 27 cents per share – far better than the 17 cents Wall Street’s pros expected.

OGE Energy is no slouch on the dividend front, either. The payout has exploded by 48% since 2014, and you can expect another improvement to the dividend in the last week or two of September.

Can OGE Energy’s (OGE) Generosity Push Shares Over the Top? 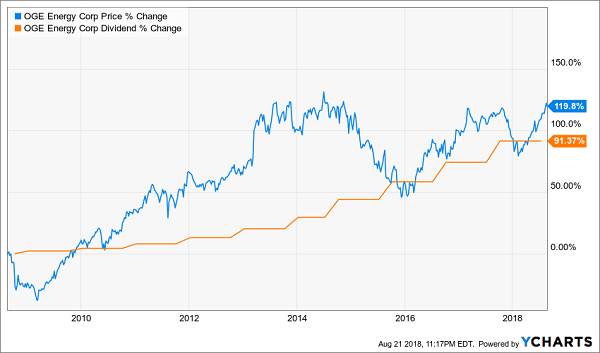 Telecom giant Verizon Communications (VZ) hasn’t exactly been blowing the doors off their hinges with its annual payout hike. While you can find plenty of companies averaging double-digit dividend growth every year, Verizon has managed to grow its distribution by only 11% since 2013 – a snail’s pace.

It’s understandable. Operating and free cash flow have been trending downwards for years as the telecom industry has grown completely saturated, forcing the likes of AT&T (T) and Verizon to slug it out against lower-cost providers such as T-Mobile (TMUS) and Sprint (S).

That said, investors could be in for something a little special this time around. The change in corporate tax rate benefits just about every U.S. business in one way or another, but it does wonders for companies such as Verizon that derive almost all of their revenues domestically. VZ’s corporate tax rate should sink from 35% to between 24%-26%. While Verizon still has other cash considerations, such as building out its 5G infrastructure, the telecom may, in either early September or very late August, take the rare opportunity to give shareholders something to cheer about.

Because sub-5% stock gains in five years sure aren’t doing the trick.

Verizon (VZ) Is Crawling Along … Just Like Its Dividend 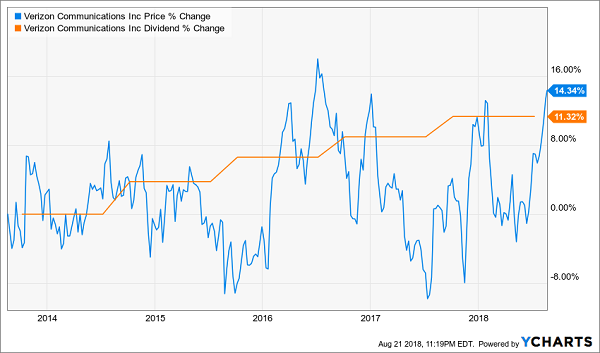 Realty Income (O) already has secured its place in the minds of investors as “The Monthly Dividend Company” – not just by paying monthly dividends, but by advertising this fact everywhere, including on the front page of its website.

But in September, it also will be eligible to join the ranks of the Dividend Aristocrats via its 25th consecutive payout hike.

Realty Income (O), while one of the most trusted REITs on Wall Street, hasn’t had the most promising 2018. Shares have barely budged northward, but it must be Wall Street following the narrative of the retailpocalypse rather than reality. In Q2, this retail REIT reported an increase in occupancy – 98.7% that was better year-over-year and quarter-over-quarter. Adjusted funds from operations (AFFO) climbed 5%, too.

That surely will help Realty Income afford its 84th consecutive quarterly increase, which you can expect to be announced sometime around the second week of September.

You’ve probably noticed that a lot of these dividend-growth dynamos have pretty chintzy-looking yields. That’s OK. In fact, that’s a “hidden” bullish signal.

You see, the very best dividend stocks rarely show high yields because their prices keep rising in line with the increasing payments.

Most people don’t realize this. But those of us who do realize it stand to profit handsomely and almost automatically!