S&P 500 Dividend Aristocrats are great if you’ve already owned them for many years or decades. These stocks have raised their payouts for 25 straight years or more. Since share prices rise as their underlying dividends rise, these stocks have showered investors with 500% to 1,000% returns or better.

BUT – if you’re looking for yield today, “Club Aristocrat” is a tough place to find new income. On average, these stocks pay 2.2%. This means you can put a million dollars into them and collect only $22,000 per year – yikes.

Instead let’s consider the High Yield Dividend Aristocrats. This group of roughly 110 S&P Composite 1500 stocks has paid and improved dividends for at least 20 consecutive years. That’s a slightly lower threshold for inclusion than the S&P 500 Aristocrats, but the group does yield a bit more on average, and the larger selection includes several individual dividend payers that I want to highlight today.

Dividend growth is a vital component of any retirement portfolio. Yes, you need a high enough income yield to ensure you can pay the bills once your salary is gone … but dividend growth will ensure that inflation doesn’t erode the buying power of those regular payouts, and ensure that you always have enough to live on.

Dividend growth also acts as a way to measure quality. 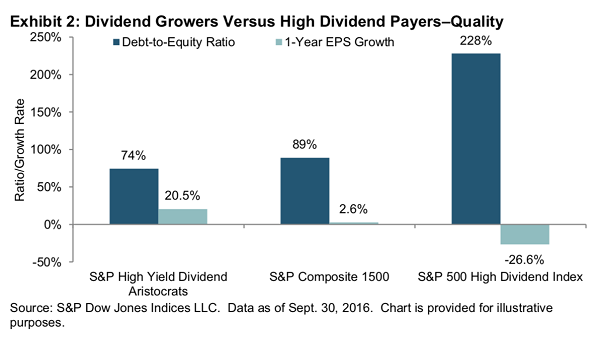 The same study shows how resilient High Yield Dividend Aristocrats are in down markets. 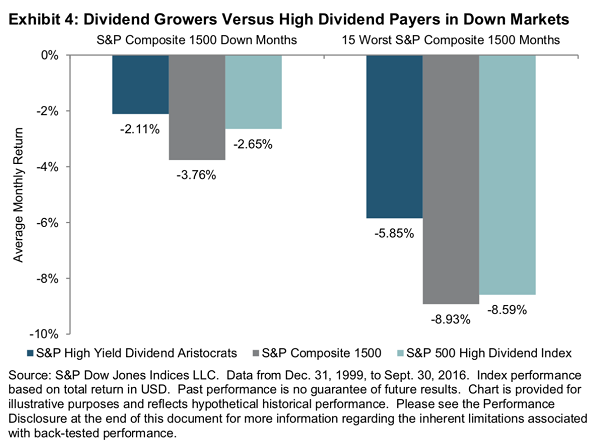 Long story short? On the whole, these high-yield dividend growers can punch far above their weight. But, like with any group of stocks, you need to be selective – if they were all gems, no one would own anything else.

That said, here are the best and the worst of the High Yield Dividend Aristocrats:

People’s United Financial (PBCT) is a mid-cap regional bank stock that operates as People’s United Bank. The bank boasts more than 300 branches across the Northeast – states such as Massachusetts, Vermont and Connecticut, among others.

There’s nothing out of the ordinary about People’s – it provides retail banking services such as checking and savings accounts, commercial banking and wealth management products.

But it’s hard not to love what’s underneath the hood. People’s has rebounded well out of the 2007-09 bear market and financial crisis, and has grown its top and bottom lines each year since 2014. People’s United is on track to finish 2017 up as well, and Wall Street analysts project more of the same going into 2018. Investors should feel even more optimistic about next year, as Jerome Powell – President Donald Trump’s nominee to replace Janet Yellen as the Federal Reserve’s chair – said he supports “tailoring” regulations to take some weight off the backs of smaller banks, which is good news for the likes of PBCT.

People’s United also is a serial dividend raiser that has boosted its payout for 25 consecutive years, which actually makes it eligible for Dividend Aristocracy. Considering the prospects for better business, a potentially more friendly regulatory environment and tax cuts, PBCT should be able to keep its foot on the dividend pedal. 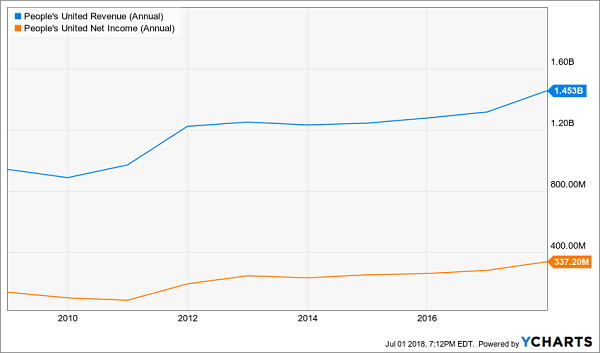 Kimberly-Clark (KMB) is one of the largest consumer staples companies on the planet. Its geographic reach spans roughly 175 countries, and the company claims that a quarter of the world’s population uses KMB products such as Huggies diapers, Kleenex tissues and Scott paper towels.

That has helped the company deliver dividends for 84 consecutive years, including 46 straight years of improvements to the annual payout.

That’s all well and good. And yes, it rarely pays to bet against consumer staples stocks, whose recession-resistant wares and typically sturdy dividends will ensure that they stay afloat, KMB simply won’t do the job.

Conscientious “mom-sumers” are gravitating away from the likes of Kimberly-Clark and toward companies such as Jessica Alba’s Honest Co., which offer “non-toxic” baby products. Thus, despite expanding economies in the U.S. and across the globe, Kimberly’s revenues have been thinning out for years. So has KMB stock, which is flat over the past three years while the broader market has ripped off 30%-plus gains.

The company is expected to return to top-line growth this year and next … but only in the low single digits, with some analysts still predicting even less.

The past few years have been brutal for retail, with mall-based operators such as JCPenney (JCP), Sears (SHLD) and Macy’s (M) plunging between 45% and 90% over the past three years as Amazon.com (AMZN) sucks the life out of brick-and-mortar stores.

Retail REITs – some of which own the malls that are suffering from store closures and lower occupancy – have cracked, too. But a few babies are being thrown out with the bathwater.

Tanger owns, operates or has an ownership interest in 44 upscale outlet malls across 22 states, featuring stores that are diversified across 510 different companies – factory stores from Adidas (ADDYY) and Ecco to Kate Spade and Tumi.

SKT has had its own share of problems, off by about 25% over the past three years. But there still are a few things to like about this contrarian retail play. For one, those losses have juiced Tanger’s dividend yield to decade-plus highs. Moreover, the company still is managing to generate profits, including a 3% bump in FFO in its most recent quarterly report.

Investors should be cautious about the retail space, but the selloff in Tanger is grossly overdone. New money has a chance to jump into a quality, high-yield name that doesn’t face the exact same pressures as traditional mall retailers, and at a value price of less than 10 times adjusted FFO. Moreover, they’ll be jumping into a company that recently qualified for inclusion in the Dividend Aristocrats with its 25th consecutive annual dividend increase.

Tanger’s (SKT) Dividend Is a Buffer Against Retail Risk 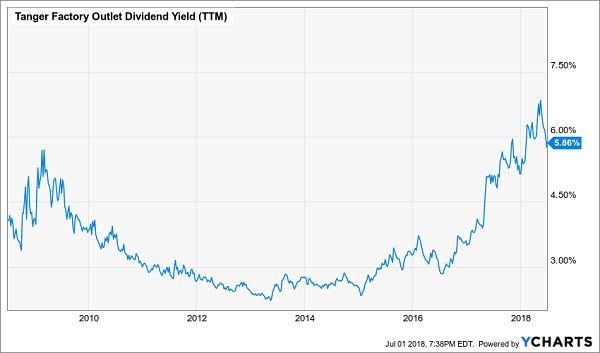 In the same vein is National Retail Properties (NNN), which actually is up about 2% to roughly match the broader market.

National Retail Properties is a retail-centric REIT, yes. But this isn’t a traditional mall operator – instead, the company focuses its energy on single-tenant leases to businesses such as Sunoco gas stations, LA Fitness gyms, SunTrust (STI) banks, AMC Theaters (AMC) and Frisch’s restaurants.

You see any real potential Amazon victims there? I don’t.

I also don’t see an occupancy problem, either. Portfolio occupancy was 99.2% as of March 31 – actually slightly up from both the prior quarter and the year-ago quarter. Moreover, the company’s average remaining lease still has 11.4 years left on it, so tenants are locked in.

Better still, first-quarter FFO jumped 12% to 67 cents per share, prompting the company to actually upgrade its forecast for full-year results.

Not bad for a “retail stock,” right?

National Retail Properties operates via “net leases,” which put the onus of things such as property taxes, insurance and repairs on the tenant – NNN simply cashes the rent check, which makes its operations far more consistent and predictable.

That business has helped National Retail Properties deliver 28 consecutive annual dividend hikes. The REIT’s most recent upgrade was a 4.4% bump in its late July 2017 distribution, which means investors should soon expect another announcement for No. 29.

It’s no surprise that a consumer-staples powerhouse such as JM Smucker (SJM) has achieved Aristocrat membership. After all, its portfolio of brands include its namesake jams, as well as Jif peanut butter and Crisco oils, are in theory no-doubt winners that should enjoy some level of popularity no matter how the economy is doing.

Smucker also made what appeared to be a smart gamble by diving headfirst into pet foods via several acquisitions. That started with the $3.2 billion purchase of Big Heart Pet Brands in 2015, and also includes its 2018 purchase of Ainsworth Pet Nutrition LLC – which owns Rachel Ray’s Nutrish brand – for $1.7 billion.

Yet SJM shares have essentially been dead money for half a decade, and likely will continue to tread water, as the company keeps running into land mines.

For one, the stock dipped hard in the early June following a dreadful fiscal fourth-quarter earnings report, which showed weakness in core areas such as peanut butter and oils. Adjusted EPS of $1.93 were well short of estimates for $2.19, while sales declined to $1.781 billion and also missed analyst expectations of $1.784 billion. Its fiscal 2019 guidance was the biggest whiff, however, with a profit range of $8.40-$8.65 missing the $9.18 Wall Street mark.

JM Smucker (SJM) Just Can’t Get Anything to Stick 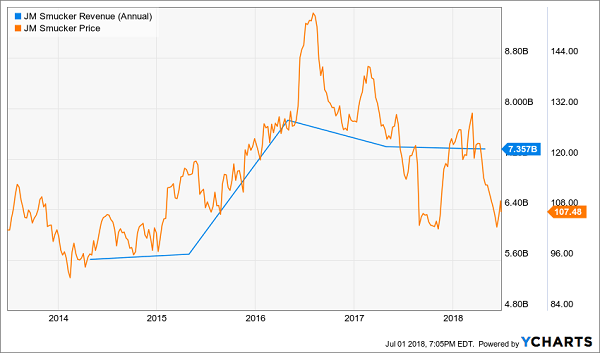 J.M. Smucker also can’t seem to “find itself.” In March, the FTC challenged a deal to buy Wesson cooking oils from ConAgra (CAG), prompting SJM to kill the deal. Then in April, the company announced it was “reviewing strategic options” (read: looking to sell) its baking division, which includes once-bulletproof brands such as Pillsbury, Hungry Jack and Jim Dandy.

Smucker still has some powerhouse name brands, but it’s no longer offering the same promise of stability that it once did.

Despite the bigger nominal payouts, High Yield Dividend Aristocrats aren’t necessarily any better than their “normal” brethren. In fact, the very best dividend stocks rarely show high yields because their prices keep rising in line with the increasing payments.

Most people never realize this. But those of us who DO stand to profit handsomely and almost automatically!