9 Dividends Due for a Raise in March

Dividend growth is the key to retirement because it fends off the effects of inflation. Even amid low inflation of 2% to 3% a year, a stagnant dividend will actually lose 2% to 3% of purchasing power a year. The only way to actually grow your income over time, then, is to invest in companies whose management makes rising dividends a priority.

That’s one reason you should buy stocks before their dividend increases. And we’ll review nine upcoming payout raises in a moment.

But there’s a second reason that’s coming to the fore of late: interest rates.

While the Federal Reserve has tried to put the spurs to interest rates with five bumps to the Fed funds rate since December 2015, bond yields haven’t cooperated much. The 10-year Treasury reached 2.6% in late 2016 and early 2017, but retreated each time. But near the end of 2017 and into 2018, rates went on the march again, and they’re now making another attack on 2.6% and higher.

Is the T-Note Back? 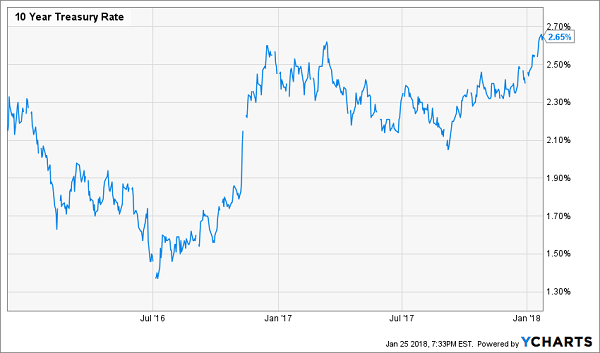 Why does that matter? Because low-growth stocks with 2% to 3% yields and flatlining dividend expansion are starting to look far less attractive to the higher security of American debt. Conversely, even modestly yielding companies that actually grow their dividends and have some potential for capital gains remain superior investments – after all, the only way for bonds’ yields to continue rising from here is for their prices to drop.

So let’s take a look at nine stocks (yielding up to 9%) that are due to up their payouts sometime in March. Here’s the list, in order of ascending yield:

Tech stalwart Oracle (ORCL) is a relatively young dividend payer, having started a nickel-quarterly distribution in 2009 as the market began emerging from its bear fit. Since then, however, the company has well more than tripled its payout to 19 cents per share, including a 26.7% hike in 2017.

Oracle has been criticized for being late to certain technological trends, most notably the cloud, but Nomura’s Christopher Eberle recently slapped a “Buy” rating on the stock in part because the company has rectified that situation and now offers a deep suite of cloud-based business apps.

The promise in Oracle’s cloud and on-premise software has helped drive roughly Nasdaq Composite-meeting returns in the past 12 months. But investors will want to continue seeing robust growth in the dividend as well. An announcement on that front should come sometime in the middle of March.

Pop quiz: Which stock has a better total return in the past five years: Best Buy (BBY), or Amazon (AMZN)? 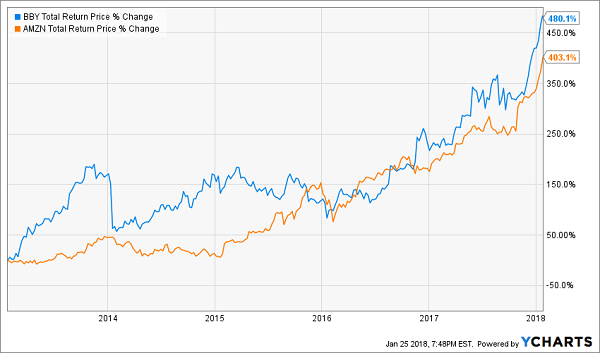 Yes, Amazon is a threat to companies across several industries, and Best Buy’s future is far from guaranteed. But to say that Best Buy figured out how to at least fend off the giant is both fair and accurate.

Also, don’t sleep on this retailer’s dividend. While other brick-and-mortar outfits have had to slow or stop their payout growth altogether, BBY has doubled its distribution since 2013.

If that’s to continue in 2018, Best Buy should let investors know either in very early March, or the waning days of February.

Vail Resorts (MTN) – the operator of ski and other resorts in Vail, Colorado, as well as across the U.S. and the world – is one of several stocks I highlighted because their dividends could benefit from Republicans’ proposed tax overhaul.

That means we should look ahead to Vail’s next potential dividend increase, which should be announced sometime in the early to middle part of March.

If past precedent means anything, this isn’t going to be a small hike. Vail’s payout has more than quintupled since 2013 to its current quarterly dole of $1.053 per share. That includes a robust 30% improvement in 2017.

American Tower (AMT) is one of the more interesting real estate investment trusts (REITs) out there. That’s because rather than owning apartments, office buildings or warehouses, it owns and operates wireless and broadcast towers and other infrastructure in the U.S. and abroad.

Here, its customers include the likes of Verizon (VZ) and AT&T (T), meaning it has its hand in most of the calls and mobile internet surfing going on in this country right this very minute.

AMT also stands out for its performance over the past year, in which the stock has gained 37% versus a 4% loss for the broader Vanguard REIT ETF (VNQ). That should continue going forward, in part thanks to a recent deal with Vodafone (VOD) and Idea Cellular to widen its exposure in India by roughly a third.

That in turn bodes well for the company’s dividend, which goes up not every year but every quarter, including a regular April distribution the company typically announces in early March.

American Tower (AMT) Has Separated Itself From the Pack 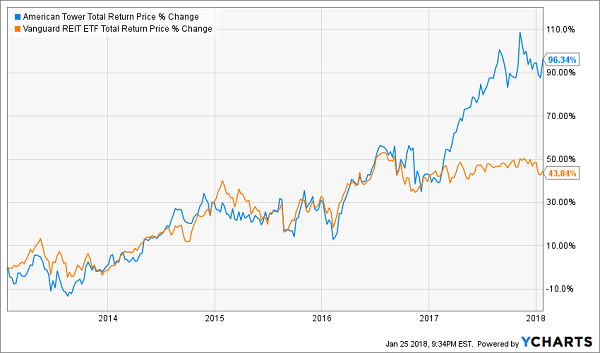 The maker of namesake Colgate dental products and Palmolive soaps, as well as Speed Stick and other personal care brands, has grossly underperformed the broader market over the past year thanks to eroding growth and far better investing options in a rip-roaring market.

Why buy Colgate, after all, when the way is clear for the likes of Amazon (AMZN) and Alphabet (GOOGL)?

The only thing Colgate has going for it is its dividend, which the company has grown for 54 consecutive years – one of the longest streaks among the Dividend Aristocrats. But CL has been getting by not on generosity, but technicality; the company’s payout expanded by less than 3% in 2017.

With more profits in its pocket thanks to more favorable tax rates, Colgate needs to give its income-hungry shareholders something to cheer about. News on that front should come sometime during the first two weeks of March.

Signet Jewelers (SIG) – the corporate entity lording over the mall jewelry trinity of Zales, Kay Jewelers and Jared – has been a dog’s breakfast for more than two years now. Since October 2015, shares have lost nearly two-thirds of their value.

What hasn’t gone wrong? The company’s operational results have been propped up by the 2014 purchase of Zales, but the company clearly is suffering from a shopper exodus from malls. The company got cracked hard in late November after announcing a 20-cent-per-share loss and 5% year-over-year drop in same-store sales for its third quarter, then reduced its 2018 earnings guidance by about 14%.

It followed that up with a December report that the Consumer Financial Protection Bureau’s is exploring the company’s credit practices and promotional offers, with a particular eye on a law that forbids “unfair, deceptive, or abusive act or practice.”

The only thing shareholders have going for it is a token dividend that still only yields 2% despite its steep losses. Signet at least is solidly profitable, so investors should hope for another payout hike, which would be announced sometime in late March.

The CFPB Went to Jared 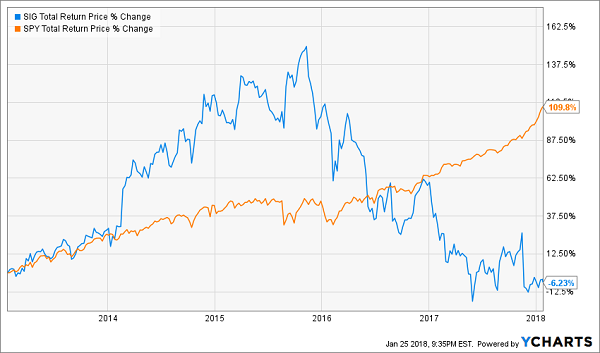 Realty Income (O), the “Monthly Dividend Company,” is revered among income hunters for its frequent regular payouts and strong history of increases. As its homepage loudly boasts, the company has delivered 81 consecutive quarterly dividend increases and 570 consecutive monthly dividends paid.

It’s also a weird bird in that the increases don’t come in neat, three-month increments. For instance, O had been announcing dividend increases every January for the past few years, but came out swinging a little early with a December 2017 proclamation instead.

Realty Income also has a streak of dividend-increase announcements in mid-March. It remains to be seen whether the company will pop this one off early, too.

W.P. Carey (WPC), like American Tower and Realty Income, delivers greater dividends every single quarter, and has been raising its payouts at that frequency for several years.

WPC, as a reminder, is a net lease REIT whose properties span a wide set of industries, from retail to automotive to hotels to even government entities. Some of its top tenants include German DIY retailer Hellweg, Amerco (UHAL) subsidiary U-Haul and Marriott (MAR).

W.P. Carey has been sliding of late in the wake of weak third-quarter results and a broader decline in the REIT industry. Nonetheless, the company should offer up another dividend improvement sometime in the back half of March. 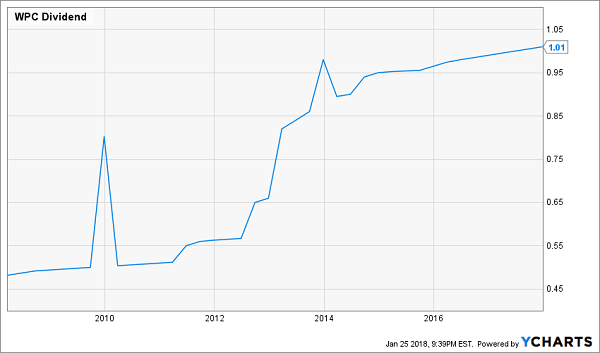 GameStop’s (GME) long-term prospects look mostly doomed because of the growing migration of gaming to digital sales and downloads. Still, the company looked like it would have a flicker of hope at the start of 2017, given the launch of two systems: the Nintendo (NTDOY) Switch and the Microsoft (MSFT) Xbox One X and S.

GME shares have plunged 30% over the past 52 weeks while the S&P 500 has climbed nearly 24%. That has come despite a third-quarter beat and raised expectations for its fiscal 2017 comps, which improved from -5% to flat, to an improvement in the low to mid-single digits.

We’re still nowhere near dividend danger at the moment, considering GME is tracking $1.52 per share in annual payouts compared to $3.42 in trailing-12-month earnings. Thus, you can expect at least a token increase to the payout sometime in either early March or late February.

Revealed: The 7 “Must Have” Dividend-Growth Stocks for 2018

How to we buy high-velocity dividends, the dividend aristocrats of tomorrow? It’s a simple three-step process:

Which future dividend aristocrats should you buy today? Well you know me – I’ve got three best buys – plus four more bonus dividend growth stocks – that should safely double your money every three to five years.