7% Dividends and Upside (Guaranteed By the Fed!)

Preferred stocks are in the doghouse, and you just might be wondering whether this is the start of a buying opportunity.

Let me put that question to rest: it is.

As you can see, all 3 of these funds are in the dumps.

A Steep Slide Down 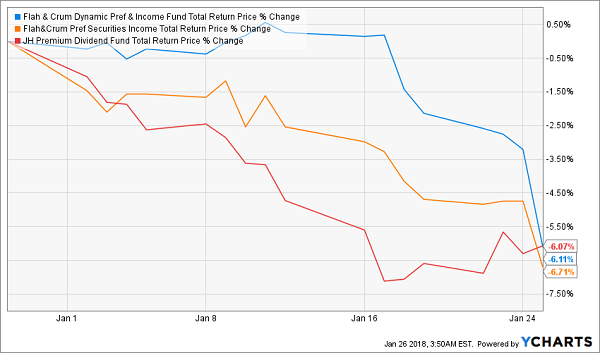 But these are great funds, not only because of their sustainable 7% dividend yields and diversified portfolios, but also because this preferred-stock selloff is misguided.

A Panic We Can Profit From

So what’s causing the selloff? A couple things.

One is simple asset rotation. The market is worried that people will offload preferreds to buy common stocks. But this hasn’t happened yet, as you can see from the iShares US Preferred Stock ETF (PFF), which has flat-lined, even though the S&P 500 has soared:

A Market in Standby Mode 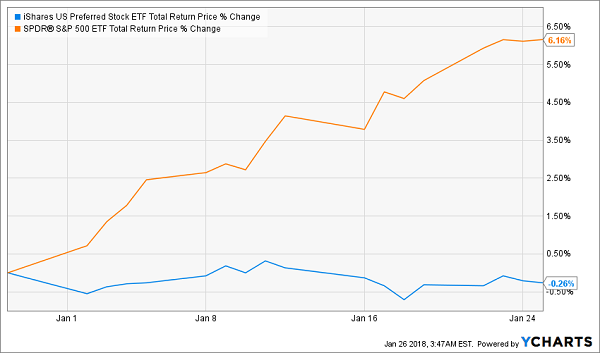 However, plenty of folks are still worried that it will, so they’re desperately trying to front-run selling that may never actually occur.

The other, and more important, fear concerns rising interest rates. The Federal Reserve has made it clear that rates are going up in 2018—at least 3 times and maybe more.

Why is this bad for preferred stocks?

For one, the dividend yields they pay would be less competitive against, say, Treasuries, whose yields will rise with rates. Higher rates could also make it tougher for the companies that issue preferreds to keep paying their dividends.

This first-level analysis is doubly wrong.

Lost in the noise is the fact that the Federal Reserve is raising rates because the economy is better. A better economy means more corporate profits, which means preferreds’ payouts are easier to cover. That, in turn, means more demand—and higher prices—for preferreds.

During the last sustained rate-hike era, in the mid-2000’s, the Fed increased rates by over 300%—and 2 of the preferred-stock funds I mentioned off the top notched some nice gains (we can’t include DFP here because it wasn’t launched until 2013): 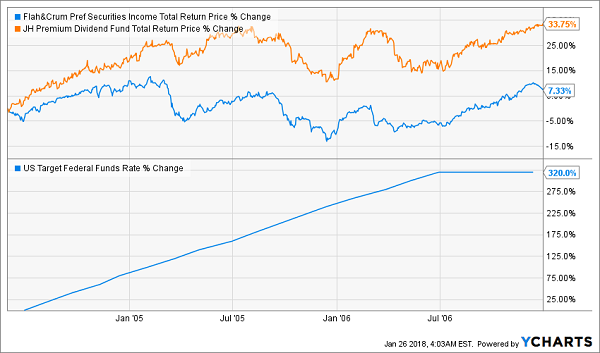 While FFC clearly lagged because it’s a very conservative fund that tries to avoid volatility (thus limiting potential returns), it didn’t go down during the period, despite the sharp rise in rates.

… and They’re Doing It Again 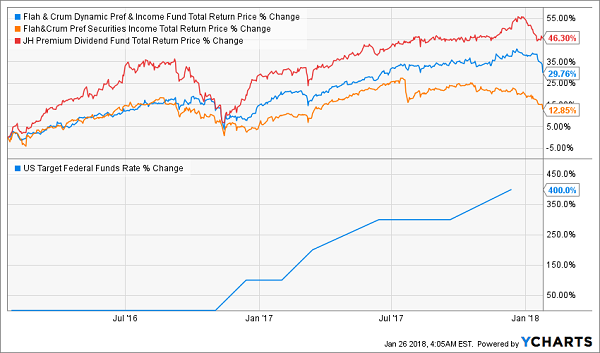 But the old fears are stirring up again, erasing recent gains in these solid funds.

Why Now Is the Time to Strike

So does that mean now is the time to buy preferred-stock funds?

Remember that scary chart I showed you above, of the 3 funds falling by 6% in less than a month?

Keep in mind that this is a market price–based return, including the current market price and dividends. There’s just one important caveat to that 6% drop—and one that makes me confident this is a screaming buying opportunity.

Since these are closed-end funds (CEFs), which almost always trade at significantly different prices than the actual market price of their underlying portfolios (which is referred to as the net asset value, or NAV), these recent market-price declines are way off from the real underlying value of these funds.

If we look at the NAVs of these funds over the same time period, we see that they have barely budged at all. 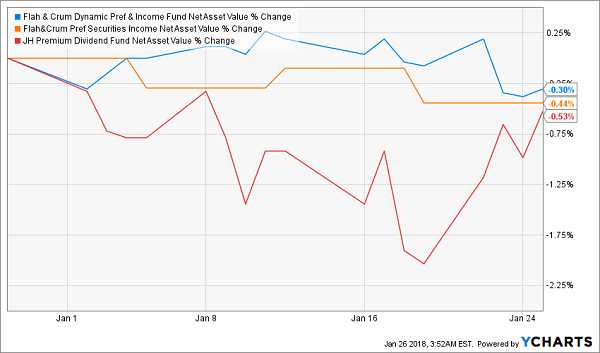 For PDT, this means that the premium to NAV (i.e., the difference between its market price and its portfolio’s real market value) has more than halved. It also means FFC and DFP have seen their premiums disappear—and turn into discounts: 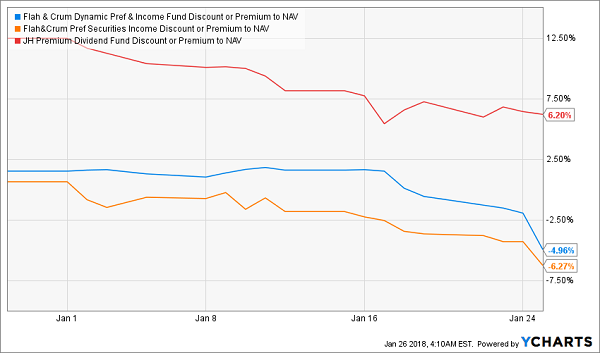 Part of this has to do with the fact that both FFC and DFP recently cut their dividends—but the newly cut dividends still leave these funds with yields of 7.2% and 7.1%, respectively.

Those are still HUGE payouts! And in the case of FFC and DFP, those yields are being sold for less than the market prices of the cash flows that support them. If that doesn’t make for a great buying opportunity, nothing does.

If you’re wandering from stock to stock (or fund to fund) looking for anything to buy in this overstretched market, you’re far from alone.

And I’ve got great news for you: I’m pounding the table on 4 other CEFs that are even better deals than the 3 preferred-stock funds I just showed you in the article above.

To be perfectly frank, I can’t believe the herd hasn’t latched on to these 4 winners yet, but they certainly will. And soon.

Because these 4 incredible dividend funds throw off SAFE yields all the way up to 10.4%! And they’re all trading at ridiculous discounts that have them poised to explode for 20%+ gains this year alone.

Let’s throw some dollars and cents behind those numbers, so you can see the kind of life-changing profits I’m talking about here. And let’s zero in on that 10.4%-yielder I just mentioned.

Drop, say, $100,000 into this cash machine and $10,400 of that cash will boomerang straight back into your pocket in the form of dividends over the next 12 months!

And that doesn’t even include this fund’s 20% gain potential, which would grow your investment by a nice $20,000.

Why do I say that?

For one, this 10.4% dividend monster is a terrific bargain at a 5.3% discount to NAV. And your upside is even bigger when you realize that this fund usually trades for 2% more than it’s actually worth.

That’s just the start, though.

Because this fund’s management has an eye for bargains unlike any I’ve ever seen: the stock portfolio they’ve assembled boasts an average P/E ratio of 17.5 now—way lower than the S&P 500’s 25!

As I said, it’s only a matter of time before the herd latches on to this incredible fund and the 3 others I want to share with you now. That means you need to make your move if you want to grab the biggest gains—and lock in these stupendous yields before they shrivel up.

Don’t waste another moment. CLICK HERE to get the names, tickers and everything you need to know about these 4 amazing funds now.