5 Dividends That Will Disappear in 5 Years

A high dividend yield can be the ultimate retirement holding. Or it can be a trap.

Today, I’m going to show you five stocks with mouth-watering yields of between 6% and 23% that are tomorrow’s dividend disasters. If you own shares in any of these firms, sell them now.

Don’t “ride these stocks down” like RadioShack shareholders did when the nearly century-old former electronics retailing giant that filed for bankruptcy protection in 2015.

RadioShack suspended its dividend in July 2012. The warning signs were there, but no one listened. Revenues had been in constant decline since their peak 16 years earlier, debts were mounting, ratings agencies were downgrading RadioShack’s bonds. And in April 2012, RSH reported the first of what would be many quarterly losses.

However, Wall Street pundits kept touting the allure of RadioShack’s dividend as it ballooned from high single digits early in the year to double digits in the months before the cut. The dividend wasn’t growing, of course – RSH was hemorrhaging.

But it didn’t have to happen. For years, investors were warned about the growing danger at RadioShack, and I’d like to prevent the same thing from happening to you. That’s why today, I want to show you five high yielders that, like RadioShack, are dividend disasters waiting to happen. Then, I’ll point you in the direction of some big-income plays that you can actually trust for decades to come.

When Mattel (MAT) last raised its dividend, from 36 cents to 38 cents quarterly at the beginning of 2014, few people batted an eye. The company had earned $2.58 in 2013 – a payout ratio of roughly 60% that no one would’ve deemed worry-worthy.

Fast-forward just three years, and that exact same quarterly dividend looks unsustainable amid a 2016 that saw Mattel’s profits slashed to just 92 cents. Translation: MAT paid out 165% of its profits as dividends last year.

If that math doesn’t sound right to you … well, that’s the problem.

Mattel isn’t going to disappear overnight. Ubiquitous brands such as Fisher-Price and Barbie might be in decline, but they’ll continue to be worth something until kids stop playing with toys altogether, but many of them are in decline. The company isn’t ignorant to technology, either, evolving to offer products such as the voice-controlled smart-baby monitor Aristotle, which launched early this year.

But the loss of the Disney (DIS) Princess license to rival Hasbro (HAS) in 2014 was a shot to the gut, and Mattel doesn’t have a knockout brand like Hasbro’s Marvel line, which seems to have unlimited potential.

Mattel’s dividend is in serious danger of a cut. And longer-term, if Mattel continues down its current failure spiral – it’s off by nearly half since 2013 – one could see Hasbro or private equity taking Mattel out of the picture via acquisition.

The Bottom Has Dropped Out at Mattel (MAT) 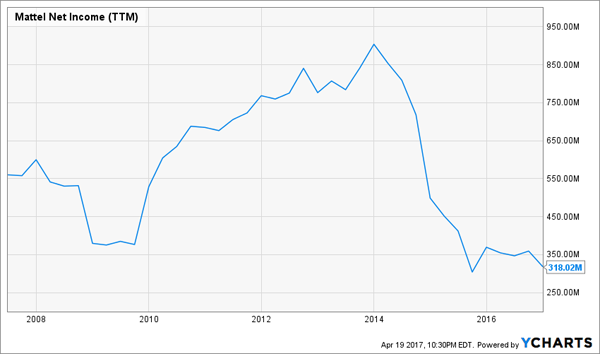 Video game retailer GameStop (GME) isn’t in any danger today … it’s five, even 10 years down the road that I worry about.

GameStop is just a few weeks removed from raising its dividend, and at 38 cents quarterly, the dividend represents less than half of 2016’s profits. Heck, a 50% payout ratio isn’t just safe – it leaves room for plenty of improvement.

But buy-and-holders looking for an investment that will last them decades must consider this: GameStop has so far survived the rise of digital distribution because Microsoft (MSFT), Sony (SNE) and Nintendo (NTODY) haven’t gone fully digital – yet. The day will come when people will be able to buy all of these games over the consoles – consoles that are also sold by Walmart (WMT), Target (TGT) and other retailers. GameStop is adjusting as best it can, actually putting together an annual strategy to close non-performing stores, while also expanding its Spring Mobile stores and delving into collectibles.

But the writing is on the wall. While GameStop’s big dividend is safe for the next few years, make no mistake – this company has an expiration date. 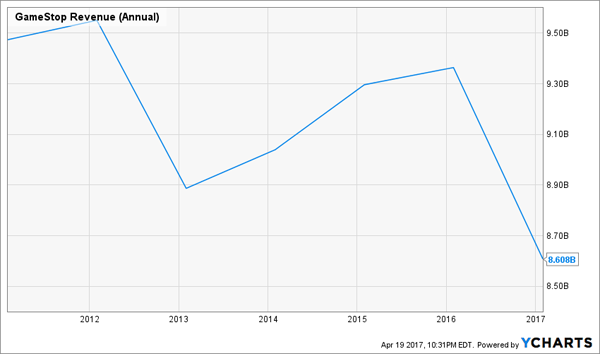 Barnes & Noble (BKS) already has Amazon.com (AMZN) to thank for the broader decline of its overall business, not to mention Amazon’s Kindle tablets for the rapid erosion in the Nook line.

Now, Amazon is going in for the coup de grace.

In 2015, AMZN opened its first physical bookstore in Seattle. It has since opened five more across four other states, and it has six more openings planned, including a pair in New York City.

Barnes & Noble has been roughly halved in just a couple of years since spinning off its college bookstore business, Barnes & Noble Education (BNED). The company’s top-line is in terminal decline. And earnings last year came to a scant 5 cents per share – discouraging when you consider that BKS’ current dividend sits at 15 cents per quarter. Even with Wall Street’s ever-optimistic analysts projecting 28 cents in profits this fiscal year, it’s clear that Barnes & Noble can’t afford to pay shareholders.

Within a couple years, it might be forced to pay the piper. 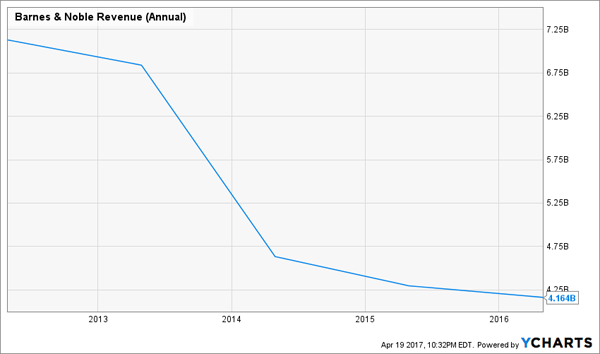 For the past four years, ANF has paid out 80 cents annually in dividends, and not once in those four years did Abercrombie post a profit of 80 cents or more. In fact, last year, Abercrombie earned just 6 cents!

This is a clear-cut story of a retailer in terminal decline. “Fast fashion” retailers like H&M and Uniqlo are crippling traditional plays like Abercrombie and American Eagle Outfitters (AEO), and they’ve already sent Aeropostale (AROPQ) into Chapter 11. Amazon is taking its cut, too. Abercrombie isn’t a bankruptcy threat yet, but it’s not even close to affording its payout, and it needs all the cash it can muster to help stave off retail reaper.

Nothing About Abercrombie (ANF) Looks Healthy 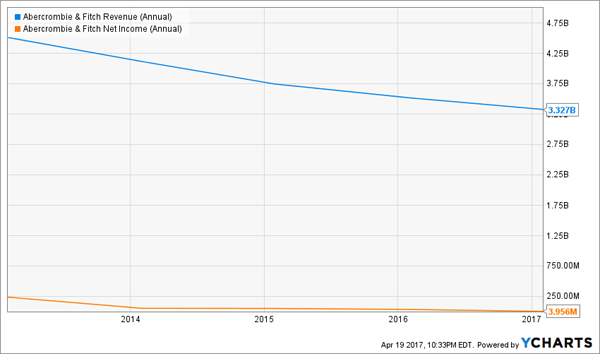 Telecom Frontier Communications (FTR) was a high-roller back in early 2015, when it was throwing off 10.5 cents a quarter for a yield north of 6%. Today, it yields nearly 22% … and its payout hasn’t budged an inch.

Frontier’s big hope for the future was a $10.5 billion buyout of Verizon Communications’ (VZ) wireline business covering California, Florida and Texas, which closed in 2016. However, it has been bleeding customers amid difficulties across its offerings and internal systems. Meanwhile, it has packed on debt, owing nearly $18 billion versus just $520 million in cash. Slim earnings a few years ago have melted into a puddle of red ink … so Frontier can’t even remotely cover the 42 cents it pays out in annual dividends.

FTR is already well under $5, knocking out many institutional buyers such as hedge funds and ETFs with minimum dollar amounts, and it’s quickly approaching the dreaded $1-per-share mark, where delisting comes into play.

That’s not a long-term dividend play – it’s degenerate gambling. Stay away from FTR at all costs. 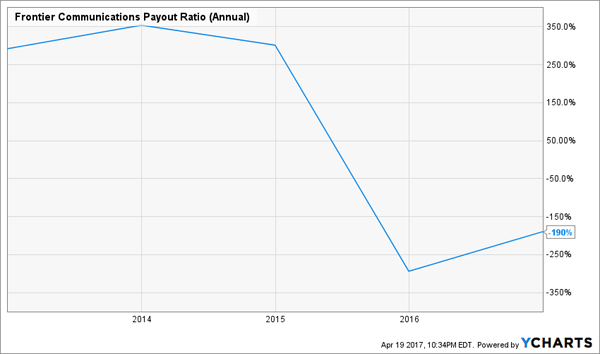 Live Off Dividends Forever With My “Ultimate” Retirement Portfolio

I’ve shown you dividend stocks whose payouts won’t be around in a few years. Now, let me introduce you to a group of high-yield winners that you can keep around for decades.

My “No Withdrawal” retirement portfolio is a group of high-yield dividend stocks that pay out substantial and sustainable income designed to finance a comfortable, worry-free retirement. Not only will you be able to live off the dividends of this portfolio alone, but the picks will also grow your nest egg at the same time, providing you with an essential backstop for whenever life throws you a curveball.

I’ve targeted an 8% yield across this group of stocks – a critical number to reach, but one that many retirement portfolios don’t even come close to touching.

Think about the recommendations you typically see from stock-picking pundits. They tell you to put your faith in blue chips like Procter & Gamble or Coca-Cola – companies that typically yield 3%, maybe 4% if you’re lucky. But the math doesn’t work! If you earn 3% to 4% returns on a nest egg of half a million dollars, you’ll only generate $20,000 in annual income from dividends – at the high end!

You didn’t work so hard in life to retire with so little to show for it.

My “No Withdrawal” portfolio ensures that you won’t have to settle during the most important years of your life. I’ve put together an all-star portfolio that allows you to collect an 8% yield, while growing your nest egg – a critical aspect of retirement investing that most other strategies leave out.

I’ve spent most of the past few months digging into the high-dividend world, and it’s harrowing to think about how many potential yield traps and retirement killers I’ve come across. However, the hard work has paid off, and I’ve been able to compile an “ultimate” dividend portfolio that provides you with …

These picks include the crème de la crème of several high-income assets, from preferred stocks to REITs to closed-end funds and more. That means crucial diversification that can weather any sort of economic storm.

Don’t scrape by on meager blue-chip returns and Social Security checks, wondering whether your retirement income will be enough to pay the bills. You’ve worked too hard to settle when it matters most. Instead, collect big, dependable dividend checks that will let you see the world and live in comfort for the rest of your post-career life.