Today I’m going to show you how REITs are literally the best buy-and-hold asset you can put your money into – and I’ll introduce you to three powerful real estate plays yielding up to 7.8% annually. These three are well positioned for decades of outperformance against the rest of the investment world.

We all know that REITs are income machines. First-quarter 2017 data shows that REITs on average yielded 4.1% — more than double the average S&P 500 stock!

But many self-annointed “REIT gurus” focus too much on income and ignore REITs’ other outstanding virtue: growth potential. You see, REITs are becoming an increasingly large cog in America’s (and the world’s) real estate machine. The days of small mom-and-pop building owners are numbered – REITs are increasingly gobbling up apartments, malls, medical centers, golf courses, datacenters and self-storage!

Thus, REITs aren’t just delivering big, fat dividend checks – they’re delivering capital gains, too, The result has been a total return performance that has outstripped every other holding in retirement-focused portfolios.

Pension fund analysis and benchmarking servicer CEM Benchmarking delivered a study examining the returns of REITs and 11 other asset classes for more than 200 pension funds. This chart tells you everything you need to know: 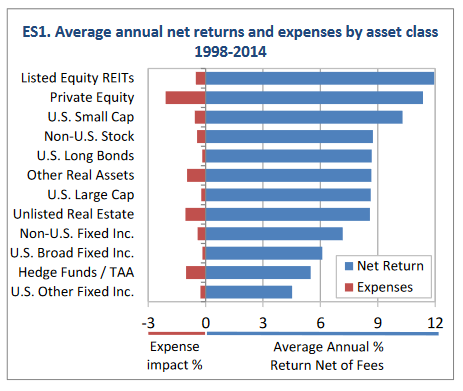 Bonds, large-cap stocks and even private equity shops were unable to outdo publicly traded REITs, which delivered average net returns of 12% annually to pension funds. Which REITs are ready to return 12%+ in the years ahead? Here are three to consider with 6.3% to 7.8% current yields and 15% to 20% price upside to boot:

Did you know that in 2016, the U.S. added 400,000 millionaires, lifting America’s seven-digit class to 10.8 million strong – so while the middle class might be evaporating, the upper class is expanding, and fast.

LaSalle owns 42 upscale hotels and resorts across seven states and Washington, D.C., though it’s a little different in that rather than simply acquiring existing luxury properties, it also redevelops and repurposes some. The portfolio includes hotels such as the Grafton on Sunset in Los Angeles, Chaminade Resort & Spa in Santa Cruz and the Kimpton Onyx in Boston.

What’s particularly attractive about LaSalle is how well-covered the dividend is. LHO yields more than 6% on quarterly dividends of roughly 45 cents per share, and it doled out $1.80 per share in 2016 … against adjusted funds from operation of $2.90 per share. That’s a mere 62% AFFO payout ratio, which means that dividend is about as safe as they come. 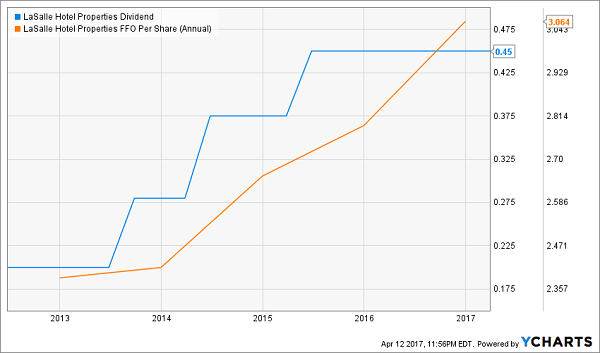 Preferred Apartment Communities (APTS) is one of the biggest growth dynamos in the REIT space right now, dishing out 66% in capital gains alone over the past five years to nearly double the return of the Vanguard REIT ETF (VNQ).

What has Wall Street so giddy about this one?

APTS primarily owns and operates multi-family properties in the U.S., though it also dips its fingers into a number of secondary investments, including student housing, office properties and even mortgage and other loans.

What’s really interesting about APTS is that it’s able to aggressively purchase new properties while still maintaining a roughly 90% FFO payout ratio because it raises money via non-traded preferred shares. The company expects to raise $2 billion over the next three years via offerings of its mShares no-loaded preferred and commission-based Series A redeemable preferred shares.

Preferred Apartment Communities also has raised its dividend six times over the past five years, for a total 47% improvement in the payout since its first quarterly distribution in 2013.

Everything about APTS screams growth, from its portfolio to its stock price to its dividend. This is a clear buy with enormous potential. 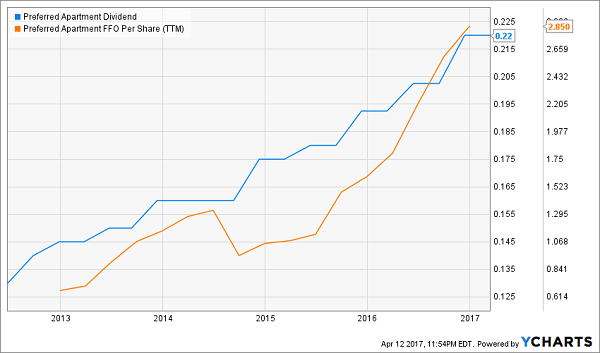 Last up is Select Income REIT (SIR), a hybrid of sorts that owns industrial properties and office properties, both of which are typically leased to single tenants such as FedEx (FDX) and ServiceNow (NOW)..

All told, the company’s 121 properties across 35 states represent approximately 44.8 million rentable square feet – with 40% of that space located in Hawaii. In fact, Select Income REIT is Hawaii’s largest industrial landowner.

While it’s a relatively boring industry, the growth has been explosive, with revenues blasting off from $188 million in 2013 to $462 million last year. Management has raised the dividend by a little more than 20 percent over the past five years, but also maintained a comfortable FFO payout ratio in the 70% range.

Moreover, SIR has also quieted a longtime concern – issuing a boatload of stock for years – by keeping its shares count level since late 2015.

Select Income (SIR) Has Worked Out All the Kinks 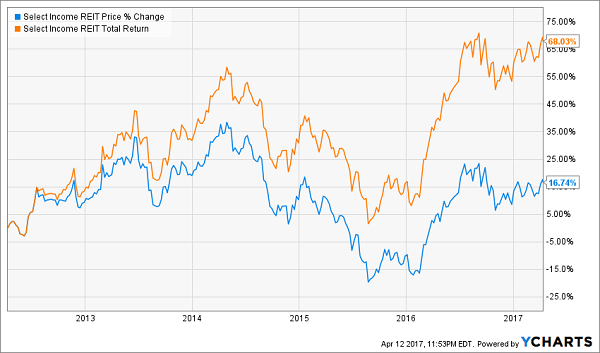 Capital gains and big, sustainable yields are the cornerstones of the kind of retirement portfolio that will keep you living comfortably for decades after you retire. That’s because the key to a successful retirement isn’t just being able to live off dividends – it’s growing your nest egg at the same time, providing you with an essential backstop for whenever life throws you a curveball.

But your retirement account needs to yield a bit more than what a couple of these plays offer. Specifically, you need to target the 8% yield of my “No Withdrawal” retirement portfolio!

Think about the recommendations you typically see from stock-picking pundits. They tell you to put your faith in blue chips like Procter & Gamble or Coca-Cola – companies that typically yield 3%, maybe 4% if you’re lucky. But the math doesn’t work! If you earn 3% to 4% returns on a nest egg of half a million dollars, you’ll only generate $20,000 in annual income from dividends – at the high end!

You didn’t work so hard in life to retire with so little to show for it.

My “No Withdrawal” portfolio ensures that you won’t have to settle during the most important years of your life. I’ve put together an all-star portfolio that allows you to collect an 8% yield, while growing your nest egg – a critical aspect of retirement investing that most other strategies leave out.

I’ve spent most of the past few months digging into the high-dividend world, and it’s harrowing to think about how many potential yield traps and retirement killers I’ve come across. However, the hard work has paid off, and I’ve been able to compile an “ultimate” dividend portfolio that provides you with …

These picks include the crème de la crème of several high-income assets, from preferred stocks to REITs to closed-end funds and more. That means crucial diversification that can weather any sort of economic storm.

Don’t scrape by on meager blue-chip returns and Social Security checks, wondering whether your retirement income will be enough to pay the bills. You’ve worked too hard to settle when it matters most. Instead, collect big, dependable dividend checks that will let you see the world and live in comfort for the rest of your post-career life.