Crude oil’s crash may have roiled stocks to start 2016, but cheap fuel is actually a great thing for the average American. Consumer confidence is heading higher, thanks to low gas prices and a continually improving job market. More disposable income means more fun for most Americans…

The recent Mintel American Lifestyles 2015 report shows that Americans are planning on increasing vacation travel by 27 percent. It’s a good time to buy stocks that are directly benefiting from this trend.

One of the largest online travel companies, Tripadvisor Inc (TRIP), just reported a solid quarter with increased consumer activity. And TRIP also detailed how their average monthly hotel shoppers grew by 10% year-over-year (to 113 million) in the last quarter of 2015.

And it’s not just Americans doing the traveling. Last year Los Angeles reported that Chinese accounted for 780,000 visits and a staggering $1.1 billion in spending. The United States is desirable destination for tourists from around the world.

Now I’m not going to buy TRIP, because it doesn’t pay a dividend – and I require a meaningful payout on any investment I make. Instead, I’m looking at these five hospitality REITs (real estate investment trusts). Their corporate structures give them a favored tax status, provided they dish most of their earnings back to shareholders in the form of dividends.

That’s an ideal setup. Here are 5 high yield stocks that are directly benefiting from more leisure travel. They’re all on sale at the moment, too – thanks to “first-level” fears of a potential recession forcing folks to bag their travel plans.

Chesapeake Lodging Trust (CHSP) invests in upscale hotels in select urban, business, and convention markets. On the most recent earnings call, company executives noted that – like much of the industry –their cost of capital has increased. It’s reduced their new deals, but helped them focus on margins and profitability.

The company has doubled its dividend by raising it 6 times in the last 5 years. Its $1.60 payout currently yields 6.2%.

A Buying Opportunity in CHSP 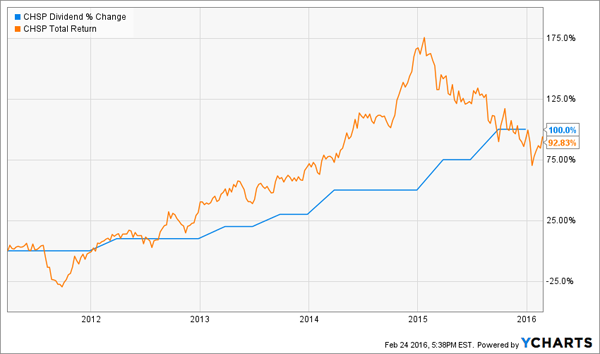 And that could get even better. Late last year CHSP announced a $100 million stock repurchase plan. If fully executed, it represents about 6% of the outstanding shares at current prices. When stock buybacks reduce the share count meaningfully like this, investors enjoy higher dividends, earnings, and cash flow per share.

LaSalle Hotel Properties (LHO) also operates in upscale hotels located in resort and urban business markets. LaSalle also has an approved stock buyback program that it hasn’t put to use yet, but may this year.

In their recent earnings call, executives talked about one of the biggest fears for the hotel industry, Airbnb. The website allows individuals to rent their homes like a hotel room (where it’s still legal – cities are increasingly regulating against Airbnb). LHO executives still consider it a competitive threat, but not the industry bomb than many feared in years past.

Overblown Airbnb fears have LaSalle’s stock in the bargain bin. It’s down 37% over the last year. But while the stock has stagnated over the past 5 years, management has boosted its dividend by 309% over the same time period! Shares now pay $1.80 for a 7.4% yield. 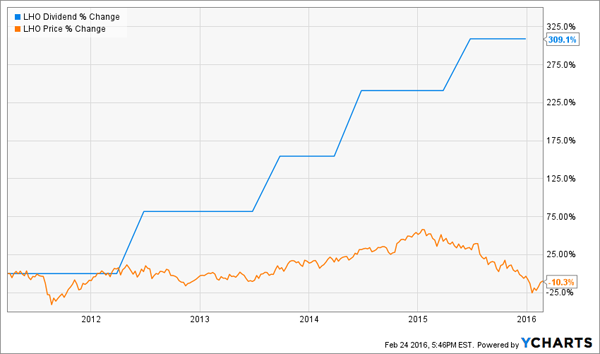 Hospitality Properties Trust (HPT) splits its real estate investment operations between hotels and travel centers. The firm currently pays a $2.00 per share dividend yielding 8.3%. HPT has increased their dividend four times in the past five years.

Like much of the hospitality industry, the firm has seen its stock plunge 30% from its spring highs last year. In 2015, it was interest rate fears. Those have largely dissipated, with traders now pricing in a 58% chance of “no change” through December: 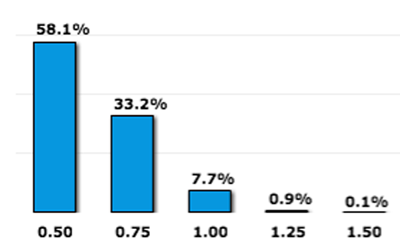 But rising rate concerns then gave way to recession worries. However hotel and hospitality stocks already have a recession priced in – which means a mere OK economy will send HPT and company up double-digits.

RLJ Lodging Trust (RLJ) is fully engaged with full-service hotels. Almost all of its properties – 97% – are run by three big operators: Marriott, Hilton or Hyatt. This provides stability and income consistency.

The company is currently paying a $1.32 dividend that yields 6.7%. RLJ has also impressively increased its dividend by 400% in the past five years.

Like many of the other operators, RLJ has more to fear from a broader economic slowdown than it does from the credit market slowing. The biggest impact from the latter is a lack of new deals or acquisitions – a danger to the entire REIT group. However, a lack of new deals won’t affect current profitability, or dividend payouts.

And like the rest of its competitors, Sunstone too has seen its share price cut by roughly 30% over the past few quarters. It trades at a price to book value of 1.17 – which means its stock is trading just 17% higher than the value of the property the company owns.

SHO pays modest $0.05 quarterly dividends, and then issues a special dividend at the end of the year to payout remaining profits. In 2014, its special dividend was $0.36. Last year, it was $1.26.

If SHO pays something comparable this year, investors will earn 11.3% in quarterly and special dividends alone. Now part of last year’s extraordinary dividend came from the sale of their Doubletree Hotel in Times Square. But over the past decade, SHO management has delivered even higher special dividends to investors. 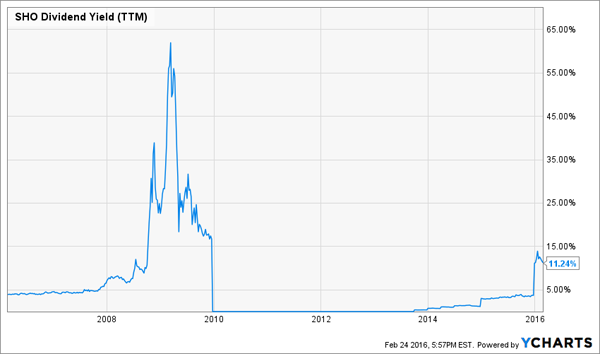 SHO’s payouts are too volatile for my liking. I prefer dividends that go up every year… and ideally, every quarter. Like this:

This particular company is able to boost its dividend every single quarter because it’s benefiting from the biggest demographic shift in U.S. history: 77 million baby boomers retiring.

The travel industry may ebb and flow, but the healthcare industry is going to keep rolling non-stop for the next two or three decades. Consider that:

In addition to the quarterly dividend grower I mentioned, I also love two more healthcare companies that pay 7.9% and 9% yields – and raise their payouts regularly, too. Most investors haven’t heard of these companies yet, so prices could soar 15-20% in just the next 12 months as they pile into these reliable payers.