If you hold dividend stocks today, you’re facing a particularly high risk of a dividend cut.

That’s based on the latest numbers from FactSet, which show that 42 S&P 500 companies had payout ratios above 100% as of the end of the second quarter—so they’re paying out more in dividends than they’re earning.

Worse, this is the third-highest total in a decade.

While that may seem like a small percentage, at just 8.4% of the index, would you get on a plane that had an 8.4% chance of crashing?

I know I wouldn’t.

And yes, it’s also true that not all of these companies will be forced to reduce their dividends. Some will find ways to juice their earnings, either by growing sales, cutting costs, or a combination of the two.

But more and more are going the dividend-cut route. In Q2, for example, 158 US stocks slashed their payouts—up 86% from a year ago!

That makes looking beyond dividend yield, at factors like payout ratios, earnings, cash flow and balance-sheet strength more important than ever.

If that sounds like work, don’t worry. I’ve done it for you and have come up with four stocks with particularly wobbly payouts you need to avoid at all costs—or sell them if you already own them.

Frontier Communications (FTR) is the kind of company you may be tempted to speculate on after a 30% decline in its share price year-to-date.

The lure? A hefty trailing-twelve month dividend yield of 12.9%, which springs straight from the stock’s nosedive: at the beginning of the year, Frontier yielded “only” 8.9%.

But unless it’s money you’re really happy to lose, don’t take the bait. Because Frontier is far from bottoming, and its dividend is on borrowed time, with the company boasting a negative payout ratio.

When a payout ratio turns negative, it means management is paying a dividend while losing money! That’s about as close as you can get to a dividend cut, something Frontier investors already stomached in 2010 and 2012.

And today’s shareholders can’t count on the company’s balance sheet to back the payout up: FTR’s long-term debt now clocks in at $17.9 billion, or nearly five times its $3.7-billion market cap! 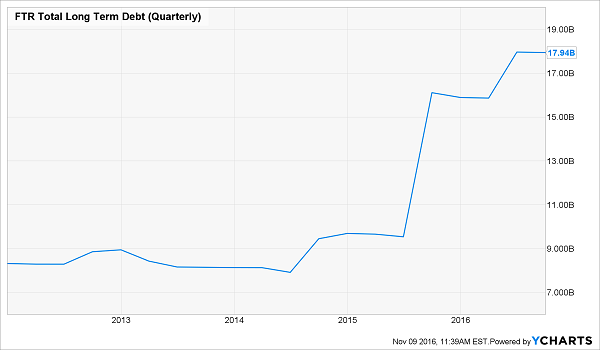 A lot of that debt comes from its $10.5-billion purchase of Verizon’s (VZ) wireline operations in California, Texas and Florida.

Trouble is, these customers are used to a level of service FTR simply can’t provide, which is why 99,000 broadband users jumped ship in the third quarter. The drop came as the two biggest telcos, AT&T (T) and Verizon, added Internet users at a rapid clip.

In hindsight, that exodus should come as no surprise from a company whose customer service ranked dead last among Internet service providers in this year’s American Customer Satisfaction Index.

The bottom line? Buying FTR (or any investment) based solely on a double-digit yield is a big mistake, particularly when there are so many stocks out there with strong dividend growth and manageable payout ratios.

That’s because Trump wants to spend big to upgrade America’s crumbling bridges and highways, and CAT should be among the first to benefit. The stock’s 3.3% yield makes it even more tempting, but if the people who piled into CAT last week expect its payout to hold steady, they could be in for a nasty surprise.

Why? Because right now, the company’s payout ratio sits at 299% and climbing. No wonder CAT’s dividend growth has stalled! 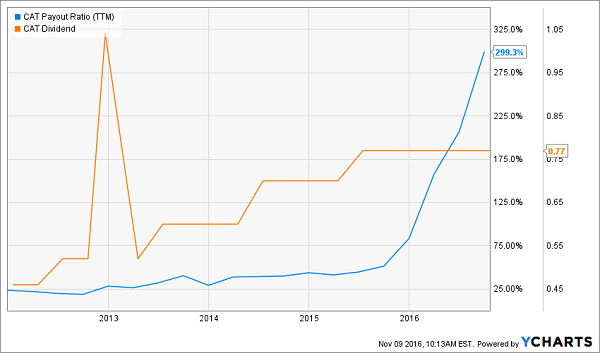 More worrisome, the company usually announces a dividend hike in June but was quiet on that front this year. CAT has paid out a more manageable 71.6% of free cash flow as dividends over the past 12 months, but that figure is way up from 48.9% a year ago.

Unlike Frontier, CAT boasts a healthy balance sheet, so the payout seems safe for now. But the company desperately needs a global resource recovery to hold the dividend steady, let alone grow it … and a government spending spree won’t come quickly enough to help.

The Mosaic Co. (MOS) boasts a 3.9% trailing-twelve-month yield, which looks great on paper. Too bad it also boasts three dividend cut “warning signs”: falling earnings; a high payout ratio (87.5% of earnings and 128.6% of free cash flow); and a dividend that hasn’t seen a raise since June 2015. 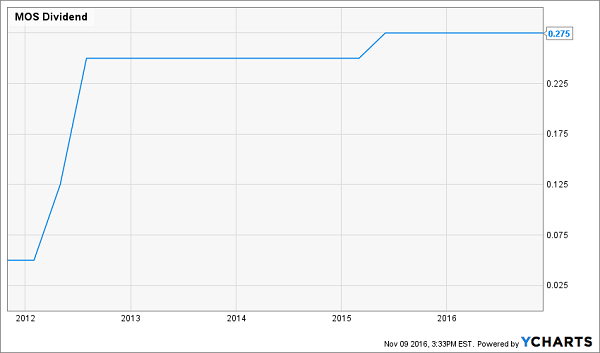 Like all potash producers, Mosaic is struggling with a collapse in potash prices. In Q3, it sold potash for $165 per ton, down from $265 last year. The company expects higher shipments in 2017, but prices will likely stay weak, due to a glut Credit Suisse doesn’t see waning till the second half of 2017 at the earliest. That could push Mosaic’s payout ratio over the 100% “red line”—and put a dividend cut squarely on the table.

Mattel (MAT) isn’t facing the same level of dividend-cut risk as Caterpillar and Frontier—its payout ratio clocks in at 142%, but if the company meets analysts’ expectations of $1.72 in earnings per share in 2017, it would be able to whittle that back to around 88%.

That’s still an alarmingly high figure that, at the very least, rules out a dividend hike in 2017. That would mean MAT’s investors will likely start 2018 collecting the same $0.38 quarterly payout they were back in early 2014!

That not only leaves them exposed to inflation but bodes ill for the stock price, too. Take a look at how the toymaker’s shares rose in tandem with its dividend increases—then dove when the dividend juice went flat: 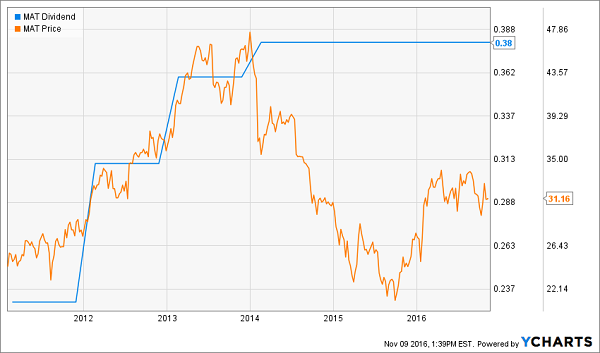 MAT boasts a high trailing-twelve-month yield of 4.9% today, but with no dividend growth on the horizon, you can expect to still be yielding 4.9% on your initial buy two years from now. That makes Mattel a stock you need to keep well clear of your retirement portfolio.

Dividend cuts are a gut punch for any investor, but they’re downright crippling if you need that income to pay the bills. You may even be forced to sell stocks to make up for the loss … a slap in the face that just shrivels your income more.

That’s a nightmare scenario for any retiree. But it’s one you’ll never have to worry about if you hold the 6 little-known investments I have for you today. They throw off high, safe yields of 7.7%, 8.7% and even 11.0%, letting you live on dividends alone without ever having to touch your capital.

Obviously, the more money you have, the better. But the upshot is that with an income stream like that, you’re free from ever having to worry about stock prices, because when your dividends are safe, who cares if your stock prices swing up and down on any given day?

I can’t wait to show you the nuts and bolts of my strategy and the 6 powerful investments that make it up. Simply click here and I’ll give you all the details and reveal the names, ticker symbols and buy prices of these high-income wonders.