Today I’m bringing you a round of good news … and a round of bad news.

The good? So far, this year’s been better than last for dividend hounds (like us) hoping to dodge a nasty payout cut.

According to Standard & Poor’s, 85 American companies cut their payouts in January and February. That’s still a big number, but it’s down sharply from 119 in the first two months of 2016.

That’s partly because we’re another year out from the oil crash, and the first two months of 2016 saw some big cuts in the sector. ConocoPhillips (COP), for example, dropped its first cut in 25 years—to the tune of 67%—on shareholders, while Precision Drilling (PD) tossed its payout entirely.

The bad news? Just because the goo is hanging in just below $50 a barrel and the number of cutters is down doesn’t mean we’re out of the woods.

Because there’s a new threat on the horizon: rising interest rates—and first-level investors are ignoring how much they’ll squeeze debt-laden sacred cows, including many Dividend Aristocrats.

Throw in the S&P 500’s nosebleed price-to-earnings ratio of 25, and you’ve got a recipe for some harsh share-price drops when the next cuts come, and I don’t want you to get hit. That’s why I’ve flagged three blue chips you must avoid now (or dump if you already own them).

PBI: A Payout on Borrowed Time

Pitney Bowes (PBI) has two things going for it: a well-known name and a high 6.0% forward dividend yield.

You’d think a 50% cut would be enough to stabilize the dividend … but you’d be wrong. Pitney still sent a ridiculous 151.5% of its last 12 months of earnings out to shareholders—and that payout ratio is climbing as profits go into free fall:

The Chart Every Dividend Investor Dreads 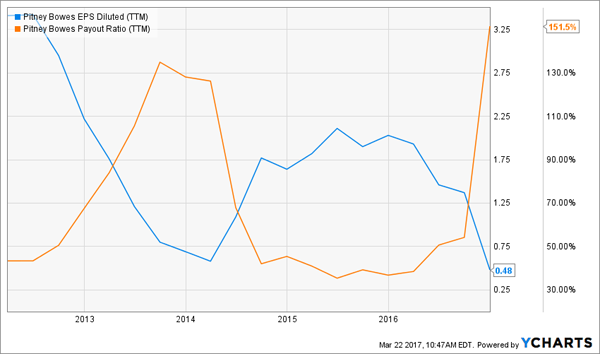 Pitney is paying out a more reasonable 42.6% of free cash flow, so its dividend isn’t in imminent danger. But there’s another figure that worries me more: long-term debt. At $3.4 billion, it’s actually 44.7% above Pitney’s $2.3-billion market cap!

That’s a heavy burden for a company that’s making the treacherous shift from old-school mail services to e-commerce. And after years of going the right way, Pitney’s debt load is starting to rise again:

Pitney Takes a Step Back 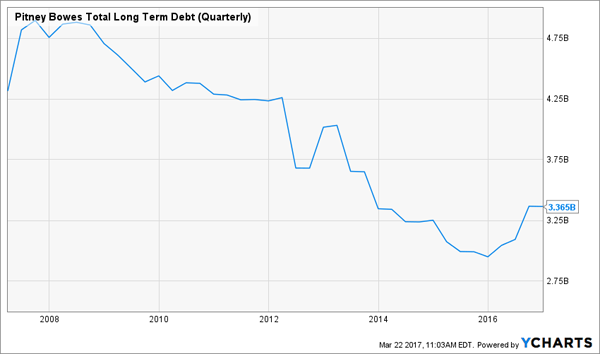 My take: Forget Pitney and its 6.0% yield, especially when there are safer—and more generous—dividend payers available, like the three 8%+ yielders my colleague Michael Foster recommended on March 22.

LB: Snapshot of a Yield Trap

Like Pitney, L Brands (LB), owner of the Victoria’s Secret and Bath & Bodyworks chains, looks like a tempting play—at first. Its yield has popped from 4.1% to over 5% in the last month, and its P/E ratio is now a tantalizing 12.0, a place it hasn’t been since 2009.

But if you take the bait, be ready to lose your shirt and your income, because there’s a good reason for both these moves: the “price” part of both the P/E and the yield has crashed—18% in the last month alone—on a wave of bad news that likely won’t ebb soon. 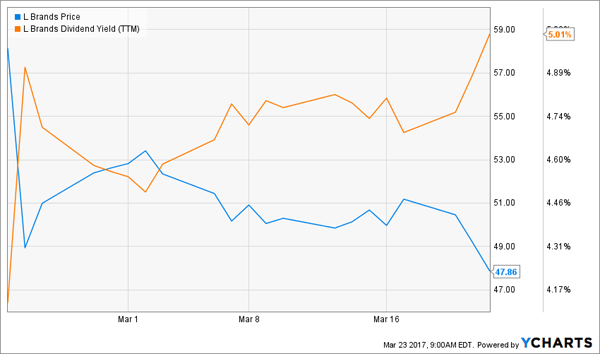 Then on March 2, the company said February sales were down 10% from a year ago. Granted, eight percentage points of that drop came from its move to exit the swimwear and apparel categories, but that doesn’t change the overall trend.

The next hit could be a dividend cut that would stun first-level investors—and wallop LB’s shares yet again—even though the writing’s been on the wall for years: the company’s payout ratio has been creeping up since early 2014, and LB now pays out more in dividends than it generates in both EPS and free cash flow:

A Dividend Cut in the Making 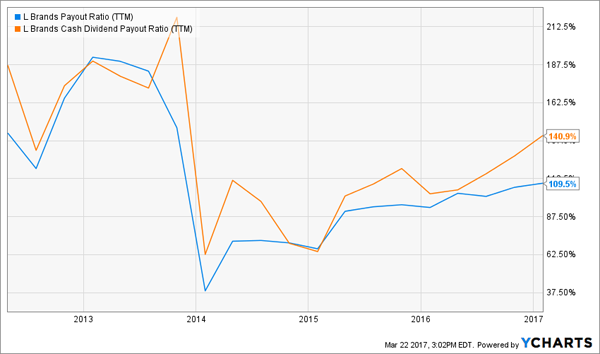 Yet another headache: the “stay-at-home” economy, which has more people buying online, not at the mall. And according to a February report from MarketWatch, Amazon.com (AMZN) is gearing up to grab a bigger share of the US lingerie market.

Mosaic: One Cut Down, One More to Come?

Mosaic Co. (MOS): Fate finally caught up with the fertilizer maker after I flagged it as a prime candidate for a dividend cut in November. At the time, rivals Potash Corp. (POT) and Agrium (AGU) had already slashed their payouts by 34% and 27%, respectively.

Mosaic shareholders who held on in hopes of escaping a similar disaster paid dearly: on February 7, management chopped the dividend by 45%, from $1.10 annually to $0.60.

So you’re probably wondering: if the damage is already done, why are we talking about Mosaic again?

Simple. I’d still be on edge if I owned this one. Because there are a lot of moving parts here.

Consider that analysts forecast EPS of $1.07 for all of 2017, and Mosaic’s new payout is 56% of that, which is still above the 50% I demand in a dividend stock. Mosaic’s long-term debt has also soared from $1.0 billion to $3.8 billion in just the last four years. Finally, the recovery in fertilizer prices is expected to be tepid.

All of this means pretty well everything has to go right for Mosaic, or you could easily find yourself facing another dividend cut. That’s just too much risk to take for a 2.1% forward yield.

Just imagine if you held L Brands in the past month: you would have stood by helplessly as nearly 20% of your cash vanished into thin air!

That’s just the beginning. Wait and see what happens when the inevitable dividend cut comes.

This is the fatal flaw in so many first-level investors’ thinking: they see a big name and a big market cap and think a company will be around forever. But today, when new technology can upend whole industries overnight, this is the riskiest bet you can make!

That’s where our “8.0% No-Withdrawal Retirement Portfolio” comes in. The 6 investments inside it protect your nest egg by spreading it out out across market sectors.

And the safe 8.0% average yield it throws off gives you a great shot at beating the market’s total return in cash alone! That’s to say nothing of the 10% to 15% discounts these income wonders are sporting as I write this.

This is how everyone should approach investing. But sadly, few folks can ever find the reliable 8.0%+ payers that can take them there.

Don’t miss out. Click here to discover my full strategy and get my 6 best buys for a safe 8.0% average yield now.