Are Utilities Still the No. 1 Safety Play?

Utility stocks—the “OGs of dividend payers”—have sailed through 2022. We’ll highlight seven of them, yielding 4% or more, in a moment.

By the way, this sector-at-large has returned 4%, including dividends, year-to-date (YTD). While that may not make us rich, it is the best record on the scoreboard this side of energy: 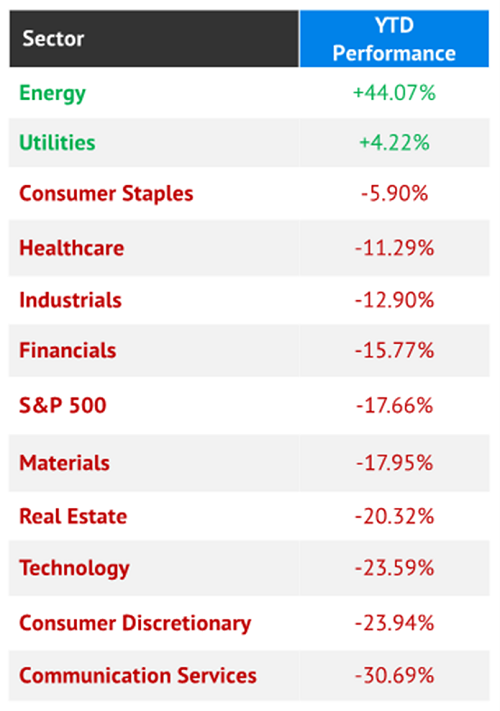 Why utilities? As always, these stocks pay and they don’t drop as much in price as the broader market. A useful quality in a dumpster-fire market.

Utilities are expensive, however, They currently trade at nearly 21 times forward earnings—near their highest forward P/E in decades and well above the S&P 500 forward P/E of 17.7. And if there’s any sector to be cautious about in the name of value, it’s utilities, where future growth is extremely unlikely to be brisk enough to make up for a valuation handicap.

But we’re not here for P/Es, we’re here for dividends. Let’s review the seven utility stocks that are paying 4% or better as I write.

OGE Energy (OGE, 4.0% yield), whose OG&E (Oklahoma Gas & Electric) serves nearly 900,000 customers across Oklahoma or Arkansas, is a sturdy place to start. I’ve highlighted this “good egg” before—specifically, earlier this year when it was hitting 52-week highs. It has plateaued since then, but it hasn’t given up many of its gains. OGE has recently merged its midstream business with Energy Transfer LP (ET) to become a pure-play electric utility. Strong cost controls and a steadily growing dividend make the case for holding the stock—but perhaps wait for the dip. While its forward P/E of 18.9 is cheaper than the sector average, it’s not cheaper by much, and it’s still more expensive than the broader market.

OGE: Still Below 2020 Highs, But Not Cheap Anymore, Either 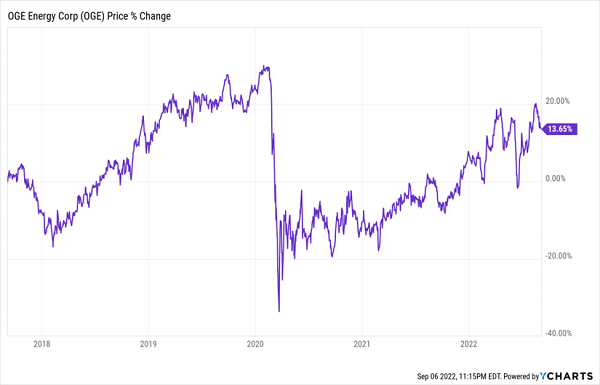 A little more attractive, from a valuation perspective, is Spire (SR, 4.0% yield), which trades about level with the market at 17.8 times forward earnings. Spire is the nation’s fifth-largest publicly traded natural-gas company, serving 1.7 million customers across Alabama, Mississippi and Missouri.

More than 90% of its business is regulated utility activity (the rest is gas marketing), which means it offers very predictable income—so when this low-vol darling says it’s targeting 5%-7% EPS growth, you can take that to the bank. That’s a healthy level of growth for a utility, by the way, and it will be helped along by the recently announced expansion of nat-gas storage facilities in Wyoming. Spire will invest about $200 million to grow the facilities to 39 billion cubic feet (Bcf) from 23 Bcf, which should be accretive to earnings by 2024 or 2025.

Northwest Natural Holding (NWN, 4.1% yield) is also worth a look, at 17.7 times forward earnings. The company serves more than 2.5 million nat-gas customers across the Pacific Northwest. Of particular interest is NWN’s moves into “renewable natural gas” (aka biogas)—a zero-carbon resource made from things such as forestry waste and landfills. It has delivered more than two decades of uninterrupted dividend growth, though that payout growth is flattening. 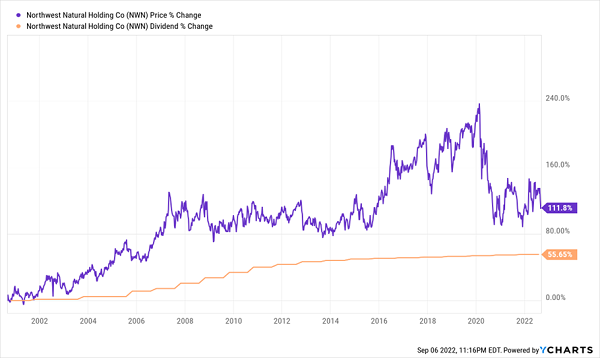 Allete (ALE, 4.3% yield) has a number of operations, including Minnesota Power, an electric utility serving 145,000 residents and several large industrial customers; Superior Water, Light and Power in Superior, Wisconsin; and Allete Clean Energy, which develops green energy projects. Its aggressive push into renewable resources such as solar and wind is commendable—it aims for a 70% share of energy coming from renewables by 2030—but that could make it a riskier play in the short-term. It is cheap, though, at a sub-16 forward P/E.

Avista (AVA, 4.3% yield) isn’t so cheap. It serves electricity to more than 400,000 customers and natural gas to 369,000 customers across four northwestern states; it also provides retail electric serve in the city and borough of Juneau, Alaska. Roughly 60% of its current energy mix is renewables. Its 18.0 forward P/E is a little more expensive than the market, though not atrocious. More worrisome is its price/earnings-to-growth (PEG) ratio of 4.3. PEG, which is based around 1.0 (lower than 1.0 is underpriced, higher than 1.0 is overpriced), factors in future growth, making it the great equalizer of valuation metrics—and by this metric, AVA is far pricier than its peers.

The same goes for Northwestern Corp. (NWE, 4.7% yield). Northwestern, a clean-energy-heavy utility, boasts that 44% of the energy it provides for South Dakota comes from wind projects, and 59% of its generation in Montana is from carbon-free sources. (It also powers parts of Nebraska.) The forward P/E is great at 16.3, and the yield is the highest on this list—and that dividend has been growing each year since 2008. But factor in growth expectations, and the PEG is a nosebleed 5.15—for a utility that has actually declined by high single digits in a good year for utilities, no less!

NWE Has Separated From the Pack—In the Wrong Direction 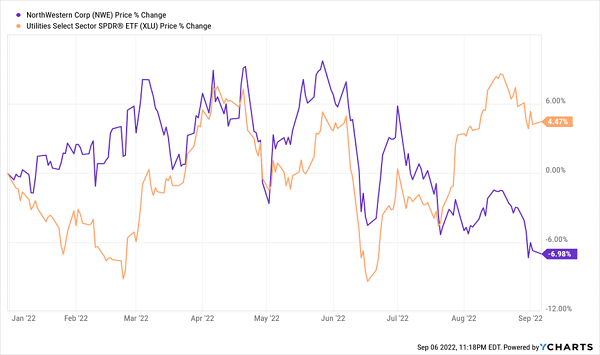 Pinnacle West (PNW, 4.5% yield) is a fascinating case. This utility provides nearly 1.3 million Arizona customers with electricity. It’s not wildly overpriced, at an 18.2 forward P/E; its PEG of 3.10 is technically overpriced but actually cheaper than the average utility; and it yields well more than the sector average at 4.5%.

But there’s reason for caution. Last year, Guggenheim analyst Shahriar Pourreza said Arizona “has now confirmed that they are the single most value destructive regulatory environment in the country”—a rate case with the Arizona Corporation Commission hobbled PNW’s earnings potential and caused Fitch to downgrade its debt.

So, we might not want to start buying the likes of NEW or PNW, but we’ve got the right idea here—and we still want to buy stocks that share the sector’s most prominent trait:

Selecting companies with a proven track of increasing their dividend payments is the safest, most reliable way to get rich in the stock market. And I want to show you how it’s done. Click here to unlock my 7 Recession-Resistant Dividend Stocks With 100% Upside report, including full analyses of each pick … and I’ll throw in a few other bonuses, too!