Beat the Bull-Market Blues With This Cheap 6.3% Dividend

It’s a vicious cycle that doesn’t look like it’ll end anytime soon, and it’s even hit what are traditionally the most overlooked corners of the market.

Take my favorite high-yield investments, closed-end funds (CEFs), which regularly offer huge yields of 7% or more. CEFs invest in all sorts of things, from energy to utilities to corporate bonds and US stocks. And by and large, they’ve gotten pricey, too (but there are still some deals to be had in the space, as we’ll discuss shortly). 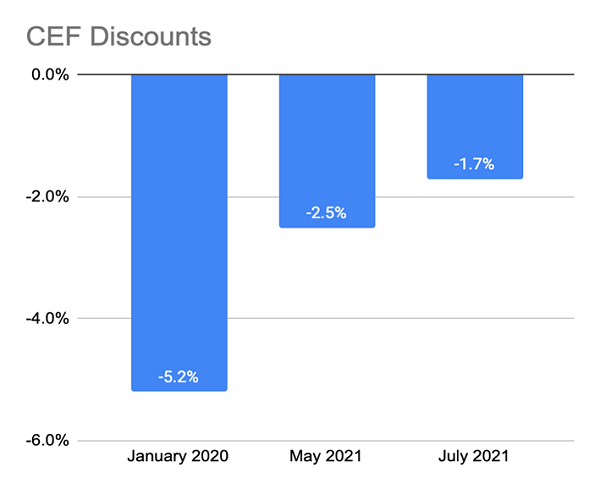 Before the pandemic, the average CEF’s market price was 5.2% below the net asset value (NAV) of its portfolio. And while that discount widened during the depths of the March 2020 panic, the latter part of the year saw a recovery that turned into a buying frenzy in early 2021. Now discounts are around 1.7%, far from their 6.2% historical average.

Since we’re talking about averages here, is it possible that a few overpriced funds are skewing the average, which would mean there are a lot of well-priced CEFs investors are ignoring?

That would seem likely, since it’s been the case throughout most of the modern history of these funds. As you can see below, the PIMCO High Income Fund (PHK), for example, has traded at premiums north of 60% (almost unheard of for CEFs!) between 2011 and 2015.

PHK’s Ridiculously High Premium Fades (but is still too high!) 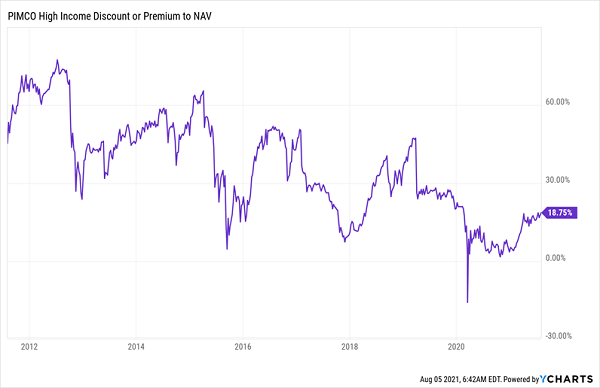 Then its premium would recover for a short time (albeit at a lower level) only to fall further. But despite that, investors are still willing to pay $1.19 for every dollar of PHK’s assets! Hugely popular CEFs like PHK would inflate the average discount in the market in the past, but the picture today is vastly different.

As of August 2021, there are fewer CEFs than usual with prices far above or below the 1.7% average discount. This narrows our shopping list because we don’t have as many deep-discounted funds to choose from.

This 6.3% Dividend Is Still a Bargain (for Now)

But there are still some deals to be found, because a few CEFs have not gotten the big price boost other funds have. For instance, General American Investors Fund (GAM) trades at a 16% discount to NAV as of this writing, despite yielding 6.3% over the last 12 months (GAM pays most of its dividend in the form of a year-end special payout).

GAM has also done this over the long term:

Strong Returns Over the Long Haul 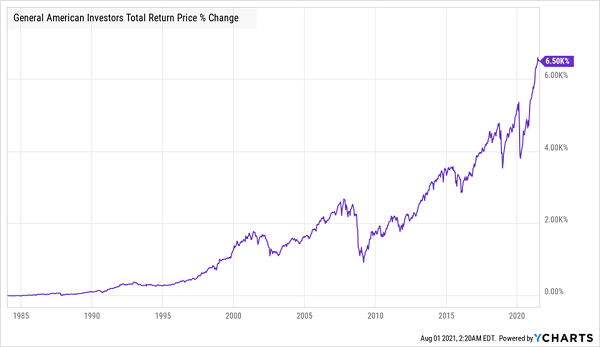 GAM has also delivered a 7.7% annualized profit over the last 15 years, thanks to a strong portfolio of blue chip stocks: its biggest investments are Microsoft (MSFT), Republic Services (RSG), Alphabet (GOOG, GOOGL) and Amazon.com (AMZN).

This CEF’s history, holdings, dividend and discount make it nicely suited to today’s market. Meanwhile, now is not the time to buy a fund like PHK: with its 19% premium to NAV, that fund is priced to perfection, and even though its premium is down from historical levels, it’s still too high, leaving PHK with more downside than upside.

And although their holdings are vastly different (PHK mainly invests in corporate bonds), it’s worth noting that PHK has underperformed GAM since its IPO. 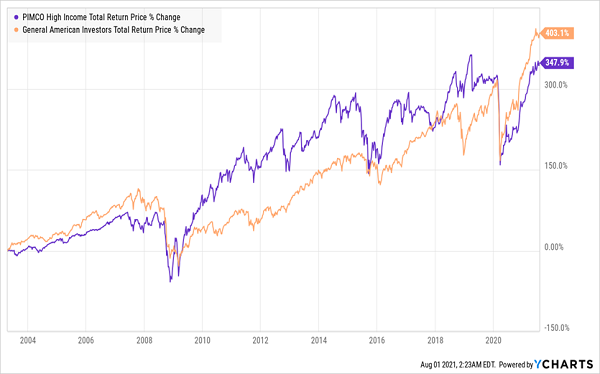 It just goes to show you that even in a pricey market, there are dividend deals to be found somewhere. And the often-irrational CEF market is always a great place to look.

CEFs boast another level of safety almost no one knows about.

Right now, I’m sharing my top 5 CEFs with the public, and I want you to start collecting their massive payouts (I’m talking about a 6.9% average dividend here) and get in position for big upside, too. My latest forecasts call for 20%+ price gains from these funds in the next 12 months!