Buy These 4 Stocks Before Their Dividends Double (Again)

First, the good news: S&P 500 companies are sending out more dividend cash than ever before. According to FactSet, dividends per share (DPS) are at an all-time high, hitting $43.90 in the 12 months ending in April, up 7.5% from the previous 12-month period.

The bad news? The party’s ending … or at least winding down. That’s because stalling earnings growth is forcing companies to dig deeper into their profits to keep the dividend parade rolling.

Dividends and Earnings: On a Collision Course 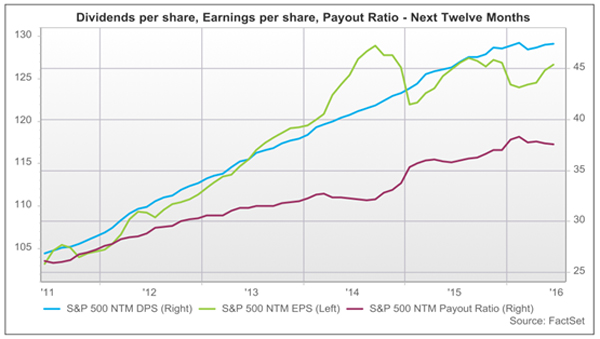 Right now, a record 44 S&P 500 companies have payout ratios above 100%—so they’re paying out more in dividends than they earn, something they clearly can’t keep up indefinitely. And over the next 12 months, FactSet sees overall DPS growth slowing even further, to just 4.9%.

The Crucial Factor Most Investors Overlook

The slowdown is particularly bad news if you’re relying on your investments for retirement, because strong dividend-growth stocks are vital to your portfolio’s long-term returns.

That doesn’t even match the S&P 500’s average of 2.1%, but if you’d bought in just six years ago, you’d be pocketing a healthy 6.9% on your original investment now, as the company’s dividend has ballooned 400% in that time.

As you’d expect, that’s caused investors to pile in. The result? A 364% total return! 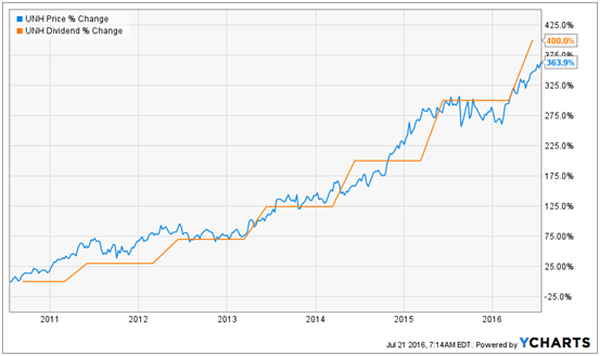 The company is already one of the most consistent profit-growers out there, with second-quarter EPS rising 14% year-over-year, building on the 10% annualized EPS growth UNH has posted over the past decade.

A huge growth driver will be the company’s Optum unit, which provides pharmacy benefits, runs clinics and supplies data analytics and other cutting-edge tech to streamline healthcare. Business is booming: in Q2, Optum’s revenue soared 52%, while operating earnings jumped 46%. Those numbers will keep climbing as baby boomers retire, sending healthcare demand through the roof.

UNH kept the dividend bonanza going in June, when it announced a 25% hike. When you add the company’s rising earnings to its safe 33% payout ratio, you get a prescription for plenty more slowdown-busting “pay raises” for investors.

Here are 3 more stocks with strong earnings growth and low payout ratios that will power big dividend hikes for years to come.

Take its recently released second-quarter earnings report, which showed adjusted EPS of $1.55 a share. That was up slightly from $1.54 a year ago … but miles ahead of the $1.43 analysts expected.

Here’s what they keep missing: even though low interest rates cut into Morgan’s profits, the bank is offsetting that by lending out more cash—in the latest quarter, loans to businesses and consumers jumped 16%.

And while the bank set aside 50% more money to cover bad loans than a year earlier, these provisions actually fell 23% from the previous quarter, suggesting the worst is behind Morgan on the energy file.

The stock now trades right around book value—ridiculous for a bank that’s nearly doubled its payout in five years. 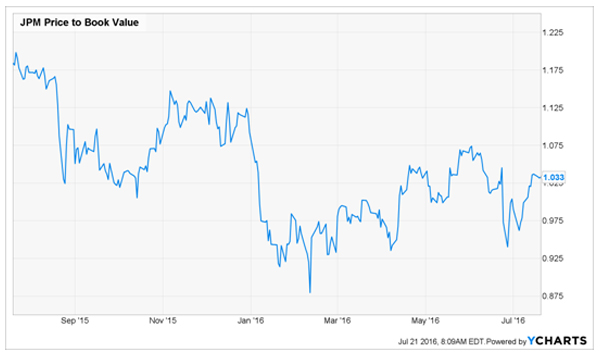 Shares yield 3.0% today, but buy now and get set for higher yields later as Morgan’s payout ticks higher, thanks to its steady earnings, 34% payout ratio and big share buybacks, which cut the number of shares outstanding, leaving the bank fewer to pay out on.

Qualcomm (QCOM) is another underappreciated dividend grower screaming for your attention now. The chipmaker, which gets most of its profits from licensing its technology, has more than doubled its quarterly dividend in the last five years.

Even so, its payout ratio is a reasonable 59%, and better yet, its turnaround, which includes signing deals with Chinese smartphone makers (many of which hadn’t been paying a cent to use Qualcomm’s designs), has gained traction. Its Snapdragon 820 processor, which powers top-selling smartphones like the Samsung (SSNLF) Galaxy S7, has also been a hit.

The kicker? Even though the stock rocketed higher post-earnings, it still boasts a forward price-to-earnings ratio of 16, just below its five-year average.

Carnival Corp. (CCL) is still a post-Brexit bargain, trading down about 7% from the day of the vote. One reason why is that investors have underestimated its U.K.-based P&O Cruises and Cunard lines, which could actually benefit from Brexit.

That’s because they sell tickets in British pounds, and the sterling has nosedived against the euro and the greenback, making Brits more likely to spend their vacation cash with local operators.

No Post-Brexit Bounce for CCL 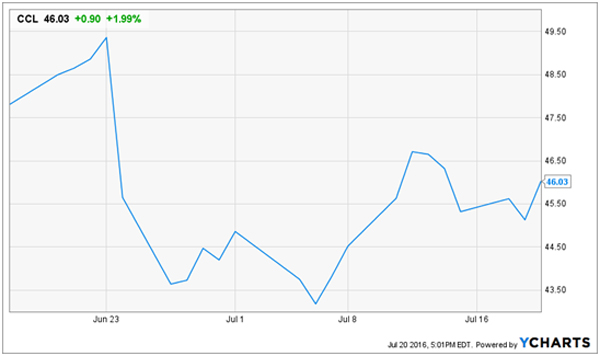 This is a management team with a firm hand on the tiller, as that strong earnings growth comes despite ever-shifting currency rates, higher fuel prices and fears of terrorist attacks.

How are they doing it? By keeping a tight lid on costs, including through the company’s fuel-hedging program, and successfully drawing in more cruisers, with advance bookings for the back half of 2016 coming in ahead of last year, and at higher prices, to boot.

That gives you a hint of why CCL has rolled out two dividend hikes in a little more than a year, for a total boost of 40.0%. The stock yields 3.1% today, and Carnival’s low payout ratio—just 40% of earnings—signals more big increases to come.

Buying these 4 dividend growers will leave you sitting pretty as S&P 500 payout growth grinds lower, but I also urge you to take a look at another type of investment—closed-end funds.

Plus they’re cheap today, trading at a 7% to 15% discount to net asset value—so like our four dividend growers above, you can bank on a nice rise in the share price as yield-starved investors pile in.

I’m not the only fan of closed-ends. So is Jeff Gundlach, the famed “Bond God.” He’s known for making contrarian calls, but he’s usually right—and profitable:

Now Gundlach’s pounding the table on closed-end funds—and it’s a perfect time for you to see if they’re a good fit for your portfolio, too. Simply go here now to get all the details and the names of my 3 favorite high-yielding closed-ends.