The market keeps reaching record highs and many analysts worry equities are overvalued in a post-Brexit, stagnant global economy. But that isn’t stopping irrational exuberance from causing overvalued stocks to climb ever higher.

We are at risk of rapidly declining stock prices when the market comes to its senses. And in the world of high yield investments, there is an additional risk: dividend cuts would cause those stocks to fall even further. This is especially worrying risk right now, as many high yield stocks have been pushed higher even though their metrics indicate a dividend cut could come soon.

The stocks facing this risk the most are some business development corporations (BDCs), which are legally required to pay out 90% of their income or more. In reality, many are paying an even higher percentage of their income as dividends, pushing their yields above 8%. In some extreme cases, yields are as high as 14%!

A sky high income stream is attractive, but it’s dangerous. Especially now as low interest rates have meant some BDCs have had difficulty earning enough income to cover their dividend payments. Reason being, BDCs effectively work as banks, borrowing at low interest rates and lending out at higher interest rates. But as interest rates fall, so too does the potential investment income for BDCs, because they have to compete with the lower and lower rates more conventional lenders are paying.

Already, this problem is hitting some BDCs hard, and three popular names with double-digit yields are already at risk of a dividend cut in the near future. If you hold any of these stocks, you need to consider selling now before their inevitable dividend cuts kickstart a sell-off that leads you holding the bag.

Medley Capital Corporation (MCC) is a BDC that is no stranger to controversy or declines. Down 20% in the last year, the stock has gained interest from investors looking for a bottom. That bottom seemed to have come in February, when it was priced 25% below today’s levels. The recovery has given many holders a false sense of confidence. 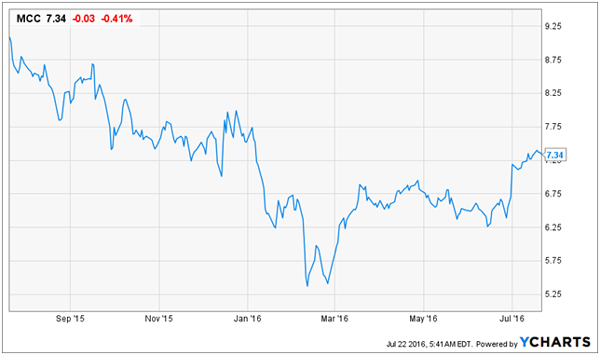 While the chart looks like Medley is mid-recovery, net investment income fell 17% last quarter and dividend coverage for the last twelve months has slumped to just 96%, with coverage falling in each of the last three quarters. Unless MCC can increase NII significantly in the next couple of quarters, it will be forced to cut its dividend.

This is why MCC is currently priced at a 25% discount to (NAV). Right now, holders are getting a whopping 16.4% dividend yield on today’s stock price, but don’t expect that to last. With a portfolio earning just 12%, that high payout is simply unsustainable.

“Disaster” is a harsh word to describe any company, but with Fifth Street Capital (FSC) the shoe fits. Earlier this year, a lawsuit was filed against Fifth Street Asset Management (FSAM) alleging false and misleading statements regarding the value of FSC’s assets. One of the cruxes of the lawsuit is that FSAM has received more management fees for managing FSC’s asset portfolio by a compound annual growth rate of 50% per year in 2014 while also diluting shareowners’ stock value due to dilutive stock offerings.

Now, FSC is announcing its net asset income exclusive of fees related to fighting the lawsuit, but even then dividend coverage is disappointing. At 104%, the dividend is currently covered, but that coverage is being buoyed by an aggressive share buyback program. Last quarter, FSC bought back 3.1 million shares, which is over 2% of the current float. Buying such a large amount of shares in such a short time is helping undo the damage of the dilutive issues of the past, but it also indicates FSC is struggling to find new efficient ways to allocate capital.

The market is aware of FSC’s problems, which is why the stock is down over 16% in the past year even after a 20% recovery from February:

FSC Still Struggling at the Bottom 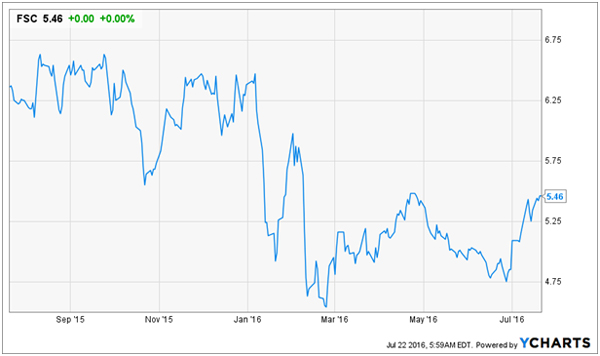 The chart doesn’t look as bad as it did a few months ago, but arguably the market’s broader recovery is helping FSC. Since NII is falling on a year-over-year basis and the lawsuit isn’t going away anytime soon, the company’s ability to pay its dividend will get pressured more and more. This is especially worrying, since FSC has a history of cutting payouts: 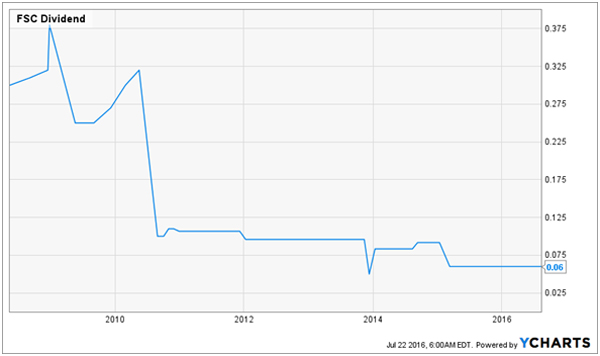 The chances of a dividend cut are even higher if FSC’s only way to increase NII per share is by buying back shares. It’s a trick that cannot last forever, as the company cannot fund its payouts and buybacks both indefinitely. If you have FSC now and you love that 13% dividend yield, enjoy it while it lasts, because that yield’s days are numbered.

Are there better BDCs out there with less chance of reduced distributions? Of course, but their yields are lower as a result of the market recognizing the better quality of these companies and thus buying them, raising the stock price and thus lowering the yield.

Solar Senior Capital (SUNS) can be considered one of the more boring BDCs. But boring is good. The company’s focus on senior loans means the company is likely to get paid even if a debtor defaults–but that isn’t a problem, since Solar’s 51-company portfolio prevents it from undue exposure to one particular big firm. The company also has 100% dividend coverage, so it’s no surprise that the stock is up big on a year-over-year basis: 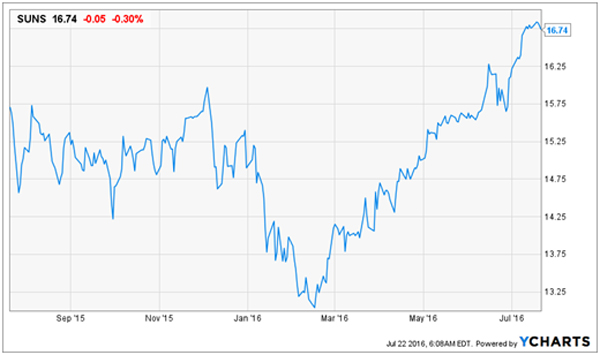 Still, SUNS is yielding over 8%, so it’s still a high yield machine.

The same goes for Ares Capital Corporation (ARCC), the biggest and best established BDC out there. Yielding 10% with a 9% one-year stock price decline, ARCC is attractively priced today given that its dividend coverage is over 100%  and NAV has begun growing over the last couple quarters.

Flattening out the losses 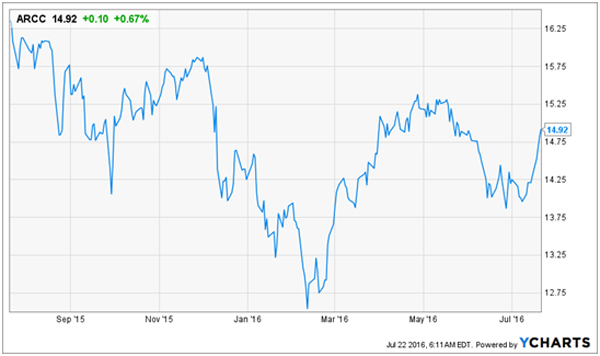 There’s still a ways for ARCC to go, and that’s no surprise: the company has nearly 10% of its portfolio allocated to energy and energy-related companies, and with the decline in oil prices, that has spooked investors. Since oil seems to have bottomed out, that risk to ARCC’s portfolio is fast disappearing, and the stock price will likely rise to acknowledge that.

Small, relatively new as a public company and often overlooked, FS Investment Corporation (FSIC) offers a 9.6% dividend yield and, like ARCC, is down almost 10% over the last year partly due to fears about energy. 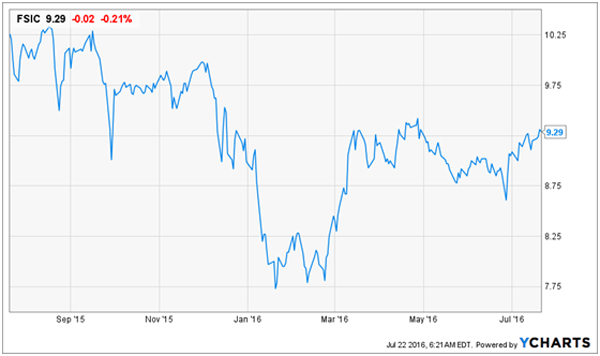 Still, the company has 101% dividend coverage, and NII has stayed roughly flat on a year-over-year basis. Most crucially, the company’s portfolio yield (excluding leverage, which will drive yield higher) was 10.4%, roughly flat from a year ago.

The ability to maintain that portfolio yield even as interest rates fall, while not going to lower-quality debt, indicates the company’s ability to compete and withstand the threats of lower interest rates. And since FSIC’s distribution-to-NAV ratio is 10%, the company should be able to continue payouts with ease.

If you’re buying BDCs to get a high level of current income, you need to be picky. Locking in a double-digit yield sounds great in theory, but those yields don’t last forever, especially if the company is facing challenges from falling interest rates.

The real challenge is identifying problems before they blow up and become an income disaster. You can do this by looking closely at BDCs’ net investment income and their ability to payout dividends. But you can also mitigate your exposure to declining income risk by bolstering your high yield portfolio with more stocks paying dividends of 8%-11% with up to 15% additional price upside. Click here and I’ll show you these stocks’ names, tickers, and buy prices.