Double-digit yields are seductive – but like sirens coaxing Odysseus’s men from the deep, they can also lead the unwary to disaster. And with more reliable dividend payers yielding less and less in this red-hot stock market, the call from those sirens is getting louder and louder. Here’s why you should plug your ears and stay the course.

One particularly popular dividend payer, Prospect Capital Corporation (PSEC), has many red flags. Currently yielding 12%, it beckons investors to come and get $10 per month for every $1,000 invested. The fact that it’s a monthly payer makes it look even more attractive, and that’s helped the stock perform well for 2016:

A Rare Bull Run for PSEC 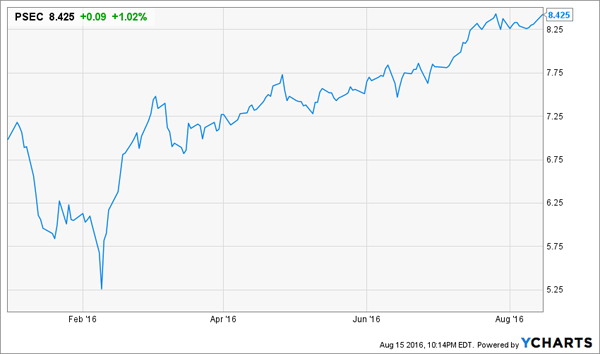 But you should stay away. PSEC is currently covering dividends with net investment income (NII), an extra 4% over payouts. But looking deeper, there are big problems. On a quarter-over-quarter basis, NII fell 11% last quarter while the company’s net asset value per share fell 0.4% from the previous quarter. On a year over year basis, the company’s NAV fell over 6%.

A bigger problem for PSEC is that it’s maxed out its credit cards. Currently, its debt-to-equity ratio is near 0.80, which management keeps as its upper limit. This means the company has limited ways to access capital to deploy into new investments.

As a business development corporation (BDC), PSEC is allowed to issue new shares and invest that money in new deals – but since PSEC is trading at a discount to NAV, this option is off the table. Right now, management should be buying back its own shares to close the discount window – but it can’t, because its out of money!

Without access to cash, new deals will be hard for PSEC—which means securing new income streams for shareholders is challenging. That puts the dividend in serious jeopardy.

Recently, Medley Capital Corporation (MCC) cut its dividend by 27% after its NII disappointed by a 23% margin. This shocked Wall Street, which had massively overestimated the company’s NII. A similar quarter may be coming for PSEC, and it will shock Wall Street just as much.

A similar situation can be seen with another BDC, Fifth Street Finance (FSC). Currently, dividends are covered by 103% thanks to a 2-cent surprise on NII last quarter. Sounds great, especially when we see this company is yielding over 12%.

But there’s a simple catch here, and it has to do with accounting. You see, last quarter 4.8% of the company’s NII wasn’t actually cash—it was so-called “payment-in-kind” (PIK) in which debtors struggling to pay back loans from FSC offer something else, like a lien against property or equity in the company.

These “IOUs” made up 4.8% of FSC’s NII last quarter, meaning cash-for-cash dividend coverage was closer to 101% last quarter. What’s even worse is the amount of IOU income is going up—it increased over 6% quarter-over-quarter.

FSC Investors Get a Pay Cut 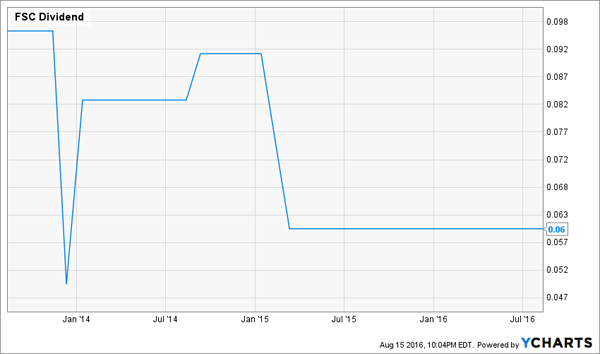 FSC cut its dividend a year ago to make it easier for the firm to cover dividends with NII. But it’s probably going to need to cut again, which explains the stock’s continued struggles:

FSC Can’t Hide from the Bears 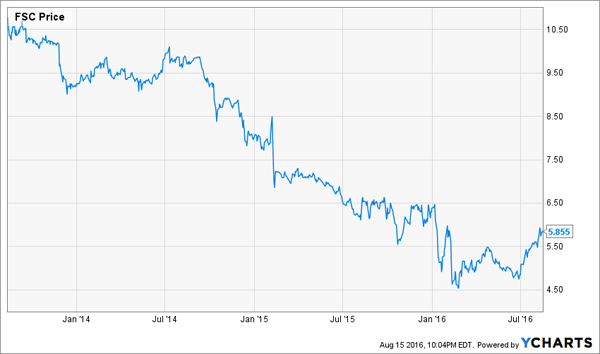 FSC and PSEC have been no strangers to controversy. PSEC has a pending lawsuit, and FSC has had management shakeups after noisy investors complained about weak performance. Pennant Park Investment (PNNT) is quite different. Well respected, well managed, and generally liked by analysts, PNNT has never excited the concerns that other BDCs have. Until now.

The biggest problem with PNNT right now is that it isn’t covering its dividends. NII over the last four quarters was just 95% of payouts, which is why the dividend is now over 14%. The market is starting to realize a cut is inevitable.

Once Cheap, Now Expensive for the Risk 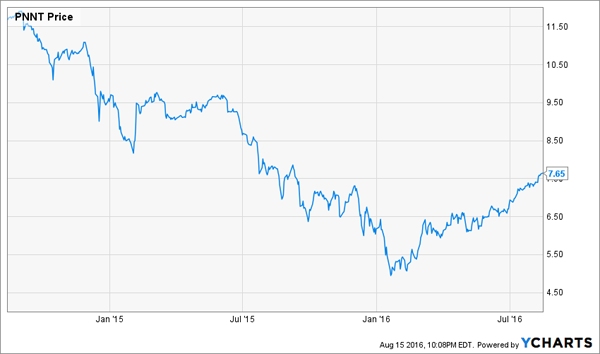 Earlier this year, PNNT was priced attractively and offered a shocking 20% yield plus tremendous capital gains upside potential. That was when the market was panicking and everything was cheap, and PNNT finally reached the floor it had been seeking for years. Now PNNT is flat on a year-over-year basis—yet the company’s NAV is down over 10% on a year-over-year basis.

Well-managed and well-respected, PNNT is getting the benefit of its past glories. But now a combination of weak NII and an improving stock price despite its weak dividend coverage and falling NAV make it a stock to avoid.

The story is reminiscent of a high yielding bond fund, Pimco High Income Fund (PHK), which traded at a huge premium to NAV for over a decade and paid out an impressive yield far above 12% for years without cutting its dividend. Everyone thought the fund was indestructible—until suddenly PHK cut its dividend last year and the fund’s stock price dropped over 15% in a couple days. The fund has recovered now, and its premium to NAV is back—although dividends remain uncovered and its NAV keeps falling (just like PNNT).

Notice how each of the companies in danger here is a BDC? By definition BDCs can be high-risk and high-cost investment vehicles. Thanks to their structured payouts, their dividends are usually very high, but this structure usually puts these payments at risk if there’s a market downturn.

There are alternatives that offer similarly high yields and much less risk—bond funds. Like BDCs, these are essentially a portfolio of business loans to companies looking to access capital to fund operations or expansion. But they are less risky than BDCs because they focus on larger, more durable companies whose risk of default is much lower.

Three of these high quality funds are now paying 8% dividends and are trading at a steep discount to NAV—just like the BDCs. But the their dividends are much more secure, which is why some hedge funds are going heavy into them.

Don’t buy any bond fund, though. Some are too expensive and too risky, while others are well managed and attractively priced. Just ask anyone who mistakenly bought PHK before its surprise payout cut.

The key is to buy funds at a discount to NAV, with cash flows covering their payouts. “Bond God” Jeffrey Gundlach has been pounding the table over these issues and, I like three in particular right now. Click here and I’ll show you which funds offer an attractive discount to NAV and a resilient dividend, plus the potential for capital gains upside.