More companies are going bankrupt now than any time since the Global Financial Crisis. This is a big problem for everyone, but nowhere is the pain more acute than in the high yield bond universe.

More defaults mean more non-payments on bonds and lower prices for those bonds, causing a junk bond portfolio to fall in both value and income. For anyone who holds corporate bonds or corporate bond funds, it’s time to pay attention.

Usually the market anticipates these trends and discounts bonds before the defaults spike. This happened in 2015. Investors sold junk bonds by the truck full, and a lack of liquidity was a broad market-wide issue. This also caused yields on high yield bonds to rise: 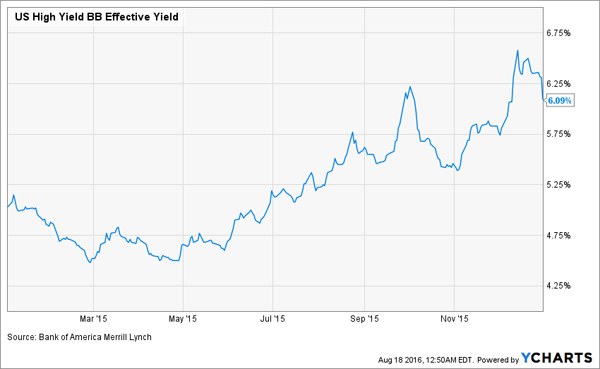 This was a disaster for anyone holding the iShares iBoxx $ High Yield Corporate Bond fund (HYG), which lost nearly 10% of its value throughout 2015: 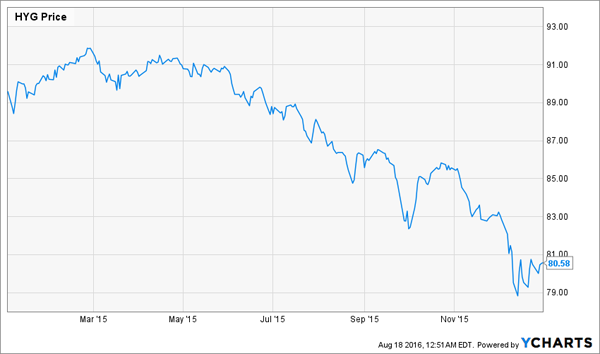 The same thing happened to another junk bond ETF, the SPDR Barclays High Yield Bond fund (JNK), which actually fell even further throughout 2015:

A Steep Fall for Junk 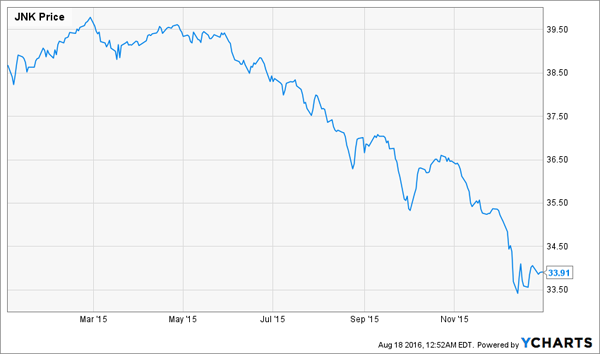 2016 has been much kinder, and both funds have nearly recovered from their 2015 losses: 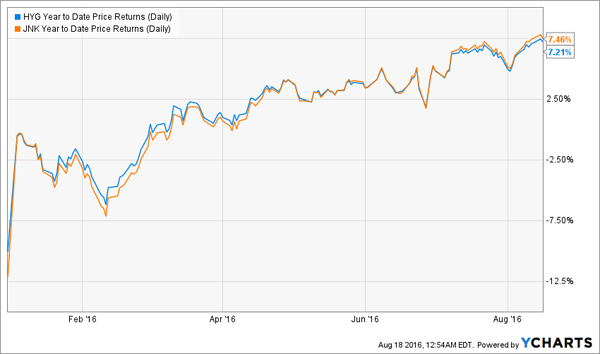 People who held these funds and stayed the course can breathe a sigh of relief now—or can they?

The problem is that the market has decided corporate bonds aren’t as bad as they feared last year, but the reasons why the market thinks this remain unclear. Default rates for junk bonds reached over 5% in the second quarter of 2016, up from 4.4% in the first quarter. Defaults have been going up steadily throughout the year, and they are expected to increase to 6.4% according to ratings firm Moody’s Investors Service.

In such a situation, holding a junk bond ETF is not where you want to be.

Both JNK and HYG are passively managed funds tied to an index—they do not try to avoid defaulting companies, but rather buy according to a preset fund mandate.

Passive indexing has become hugely popular in the stock market because it has massively outperformed many actively managed funds for a long time. Since 2013, when the S&P soared 30% in a year, passive funds have outperformed even more, as a QE-fueled market meant just buying a bunch of stocks will end up being a winning bet.

The bond market is different. Many corporate bonds cannot be easily sold. Many are poorly priced. Many are prone to non-payment and falling prices very quickly. And many are misunderstood by non-professional investors due to their intentional complexity.

This is why it’s better to buy an actively managed corporate bond fund from a large institution that has privileged access to this market and a range of research tools to ensure they avoid underperforming issues. What’s more, many of these actively managed funds are now selling at a huge discount while offering impressive yields.

Let’s start with BlackRock. The biggest bond investor in the world, BlackRock’s market access is unparalleled. BlackRock also manages a fund, the BlackRock Debt Strategies Fund (DSU), that has outperformed both HYG and JNK in 2016: 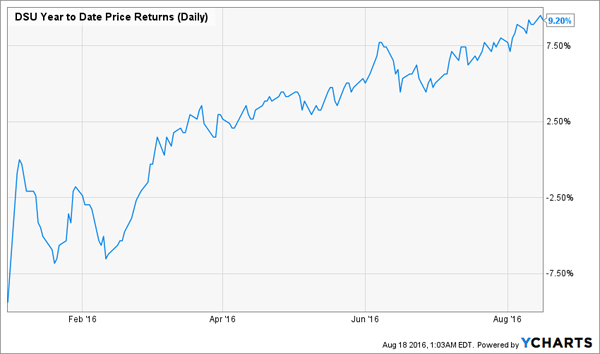 That doesn’t mean it’s too late to buy DSU. The fund is trading at a 10% discount to its net asset value (NAV), which means your buying it for just 90 cents on the dollar. So even if defaults rise to over 6%, DSU already has those defaults—and more—priced in.

And with a 6.6% yield paid monthly, its income is on par with HYG and JNK, while managers can ensure investors avoid the rising tide of bankruptcies.

Invesco High Income II fund (VLT) has a similar story behind it, with double-digit capital gains for 2016: 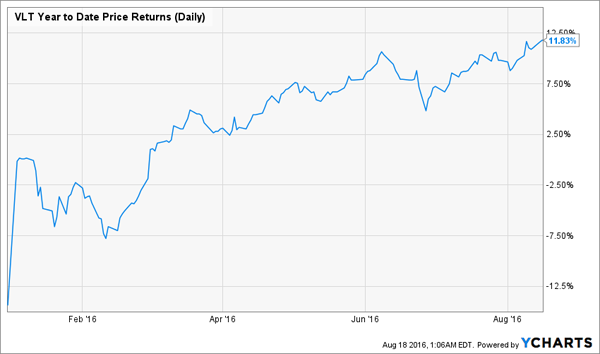 Meanwhile, the fund’s yield is 7.7% while it’s trading at a 10% discount to NAV, making it a better income provider than HYG and JNK with more capital gains potential. Invesco isn’t a big bond player, but their historical strength in equity ETFs means they have great potential in the bond world. This is a more speculative bet, but the risk of that speculation is rewarded with a monster income stream.

A third actively managed bond fund to consider is the Neuberger Berman High Yield Strategies fund (NHS), which has gone up the most of these junk bond funds—over 15% for 2016:

Up and To the Right 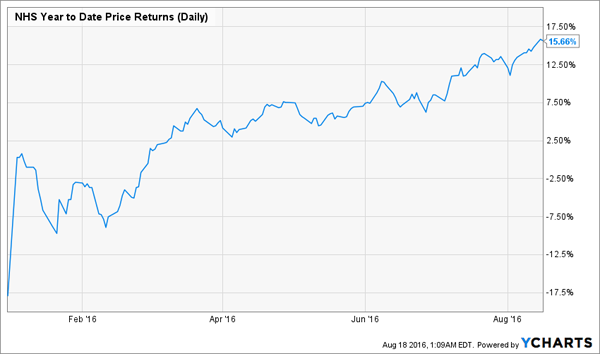 And it’s still not too late. With an 11% discount to NAV, the fund still has room to grow as the fund’s managers prove their ability to deliver income in a rising default environment. What’s more, the fund’s monster 8.2% yield means investors will be amply rewarded for speculating on the fund’s management team.

A portfolio of these three funds provides an income stream over 7% and a less risky exposure to the rising defaults of the corporate bond world. It’s unwise to avoid high yield entirely just because the market has gone up so much—after all, where would you go? And when will the bottom fall? That could take months—and months of sitting in cash means months of lost income.

Instead, I prefer to put together a portfolio of high yield bond funds that are discounted to their value while relying on managers to navigate the rising default world. But I can’t put all my money with them or in the corporate bond market. Fortunately, there is a broad universe of diversified income-producing funds that yield 8% or more, and I can create a broad portfolio with exposure to many assets by buying these funds.

And even better: they’re selling at a discount. Want to know more about this universe of high income funds? Click here and I’ll show you which funds are highly discounted with 8% dividends or more.