2 Warren Buffett Favorites to Sell Now – and 1 to Buy

This time, Warren Buffett actually IS losing his touch.

Historically, of course, there are few better examples to follow. If you’d invested in the Oracle of Omaha’s holding company, Berkshire Hathaway (BRK.A), 30 years ago, for example, you’d be sitting on a 3,000% gain today, compared to “only” a 953% total return for the S&P 500: 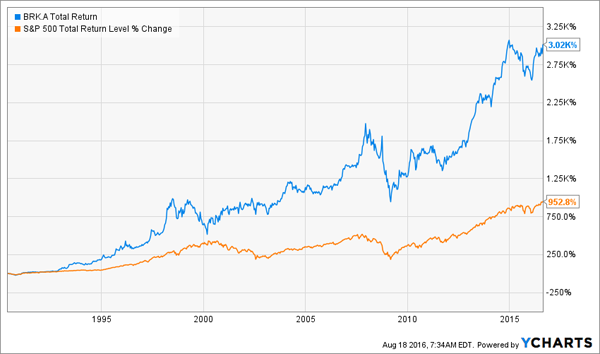 But even Buffett makes the odd bad call, and I think he’s done just that by buying—and holding on to—the two stocks below. Ironically, they’re both moves the Street seems to be giving him the benefit of the doubt on—for now.

Further on, we’ll look at a canny pick the Oracle’s right to hold on to, even though the rest of the “smart money” has thrown in the towel.

Sell This Buffett Pick Before Its Next Earnings Report

IBM Corp. (IBM) is cheap today, with a forward price-to-earnings (P/E) ratio of 12.0, but it’s cheap for a reason: Big Blue can’t figure out how to turn its sales around. 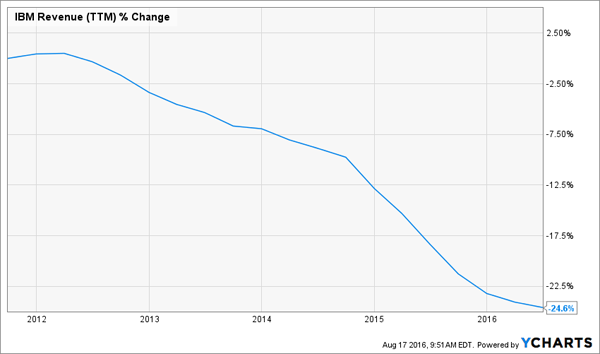 Even Buffett has admitted this might not be a successful investment: “What you pay for a stock doesn’t mean anything,” he told CNBC in February. “What means something is where the company’s going to be in five to 10 years. I think IBM will be worth more money but, like I said, I could be wrong, but we’ll accept that.”

Problem is, IBM is struggling mightily to make the shift to growth areas like cloud computing, analytics and mobile (which it lumps under a category called “Strategic Imperatives”).

Worse, the company was late to the party, ceding crucial ground to fleet-footed competitors like Amazon.com (AMZN), so it’s racing to make up for lost time. There has been some progress: in Q2, Strategic Imperatives revenue jumped 12% from a year ago and now represents 38% of IBM’s total.

Still, a company this big doesn’t turn on a dime, and it will be a while yet before Strategic Imperatives make up more than half of IBM’s top line. Meantime, its other operations were a drag in Q2, with just one of its five divisions, Cognitive Solutions (which includes cloud, analytics and security software), reporting higher sales.

More disappointment looms: IBM stood by its full-year forecast of $13.50 in diluted operating EPS, and through two quarters, it’s only about 40% of the way there. That ramps up the odds of a guidance cut when it reports Q3 earnings. When that very thing happened last October, the stock dove 6% in a single day.

So don’t be seduced by IBM’s bargain valuation and 3.4% dividend yield when there are far better opportunities available, like the stock I’ll get to in a moment.

Kraft-Heinz Could Give You Heartburn…

I know I don’t have to tell you that cutting costs only gets you so far; rising sales fuel earnings in the long run, and Kraft-Heinz needs a breakthrough product to get its revenue moving in the right direction.

Too bad the ground is shifting under its feet. As I wrote on August 8, the company and other consumer staples giants are on the wrong side of a major food trend: a growing preference for fresh food over packaged fare. They’re also facing a growing horde of smaller, nimbler competitors peddling locally produced products.

So far, management’s nibbling around the edges with a plan that includes launching a new line of frozen meals and taking the artificial coloring out of Kraft macaroni and cheese.

That’s just not enough to justify the stock’s forward P/E of 27.8, which is far higher than peers Mondelez International (MDLZ), at 23.5, and Campbell Soup (CPB), at 19.4. The 2.7% dividend yield doesn’t whet our appetite, either.

…But Buffett’s Right to Stick With Amex

Shares of American Express (AXP) have taken a beating in the past year … serving up a superb entry point if you’re looking to get in. Here’s how the stock has performed against MasterCard (MA) and Visa (V): 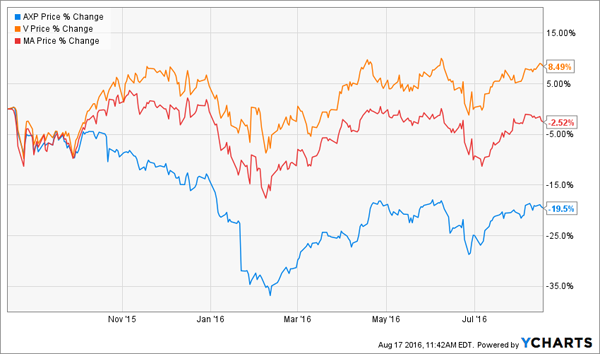 The plunge was triggered by the loss of Amex’s deal to be the exclusive card supplier for Costco Wholesale (COST)—an overreaction that’s left the credit card giant’s stock trading at just 12.1 times forecast 2016 earnings today.

Why is it an overreaction? Because Amex is a solid business that’s holding up well, despite the setback: it reported a 1% year-over-year revenue increase (adjusting for the strong greenback) in Q2, along with a 48% jump in EPS, though much of the profit increase came from the sale of the Costco portfolio.

The stock yields 1.8% today, but its quarterly dividend has risen at a 12% annualized clip over the past five years. There are more big hikes to come, thanks to its microscopic 22% payout ratio (or the percentage of earnings paid out as dividends).

For his part, Buffett hasn’t touched his Amex stake during the Costco debacle. It’s the right call—but I’d go further and jump on the dip to buy more.

These 8%-to-11% Yielders Have Way More Upside Than Amex

Why mess around with 2% to 3% yielders like Amex when you can do more than four times better with three other picks I just released to my paying subscribers (and am ready to share with you today)?

These ignored dynamos throw off safe yields of 8.0%, 8.4% … even 11.0%! Plus they’re even better deals than bargain-priced Amex, trading at just 7% to 15% of their true value today, setting the stage for a tidy gain as that gap narrows.

So how can these reliable income generators be so cheap? Because they’re an off-the-radar investment called closed-end funds.

To be honest, they’re not totally off the radar. They have gotten the attention of one big-name investor: Jeff Gundlach, the famed “Bond God” who’s known for making contrarian—and usually correct—calls:

Now Gundlach’s pounding the table on closed-end funds—and there’s never been a better time for you to add a select few to your portfolio, too. Go here now to get all the details and uncover the names of my 3 favorite high-yielding closed-ends.