Forget $1 Million: Here’s How to Retire on a Lot Less

You’ve no doubt heard the “wisdom” that you’ll need a million bucks to have any hope of retiring.

If you’re like most folks, you’ve probably wondered how you’ll manage to save such a huge stash. Maybe you’ve given up and resigned yourself to working till you’re 100.

I can’t blame you. Because with the rising cost of everything these days, finding an extra seven figures during your working life seems like a massive mountain to climb.

This is why I’m writing you today. I’m going to show you two things:

How to Build a Million-Dollar Nest Egg

Let’s start with the numbers behind the million-dollar figure that Wall Street loves to tell us is the bare minimum for a decent retirement.

Right now, American workers bring home a median income of $900 per week, which translates to $46,800 per year. If you want to sustain that income stream with savings over the course of your retirement, you’d need $1,040,000 saved up, from which you can safely withdraw 4.5% per year to get your $46,800 income stream.

That number comes from Bill Bengen, a financial advisor who, through detailed study, determined that 4.5% per year is the most you can take out of a typical portfolio—in light of market volatility—without risking running out of cash in retirement.

Now let’s look at how you can attain that million-dollar dream—if you’re still aiming for a seven-figure retirement. (And bear in mind that you can retire on much less—without making any withdrawals in retirement at all—with the three 6.8% yielders I’ll show you at the end of this article.)

If we assume you make the median income in America, it will take you nearly 40 years to reach our million-dollar goal at a 10% savings rate, and less than half that at an 80% rate (assuming the historical 7.5% return on stocks holds true in the future): 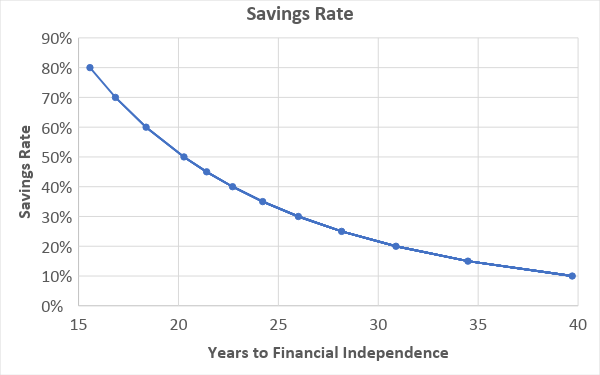 I know what you’re going to say: “An 80% savings rate? That’s out of the question for most people.” This is true. Here’s a breakdown of how long it would take at more modest rates of savings: 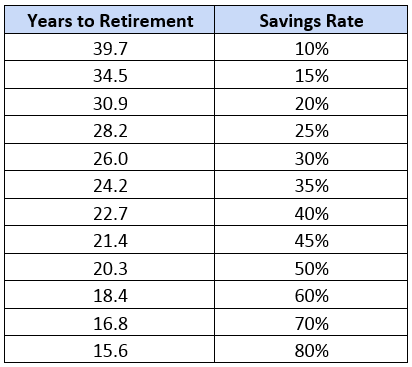 Now let’s move on to…

No matter how big your nest egg is when you kick off your retirement, there’s one totally random factor that can wreck even the best-laid plans: having the misfortune of retiring right when a recession hits.

Withdrawing 4.5% late that year, for example would have hurt a lot more than doing so in a bull year like 2013 or 2019 (so far). That’s because you would have had to sell more stocks (at fire-sale prices) to generate the income you need. And of course, selling more stocks means lowering your dividend income and reducing your gain potential.

So it’s pretty easy to see how putting off retirement by just a year or two can dramatically change how safe your portfolio is.

But, yet again, easier said than done.

Fortunately, there’s an alternative, and it comes back to those three little-known funds I mentioned off the top.

This is why closed-end funds (CEFs) should be on your retirement radar: their outsized dividend payouts (yields of 7%+ are common in the CEF space) mean you can withdraw the income you need without having to sell a single share. That’s true even if your CEF simply tracks (or even slightly lags) the market.

This can end up saving your portfolio big time in the long run.

Here’s what I mean: let’s say you hold one or more of these three popular ETFs—the SPDR S&P 500 ETF (SPY), SPDR Dow Jones Industrial Average ETF (DIA) or the Invesco QQQ ETF (QQQ), the latter of which tracks the NASDAQ 100. Taken together, this trio pays a 1.5% average dividend yield.

But what most people don’t know is that you can boost your income 4.5 times by simply swapping out these funds for their CEF equivalents.

Check out the huge differences in income you get by making these simple moves, even though these CEFs invest in exactly same companies as their ETF cousins and have similar long-term track records: 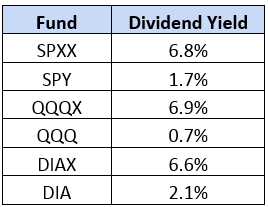 What’s more, these funds’ payouts far exceed the 4.5% withdrawal rate, meaning you can buy them and use their dividends to fund your retirement without ever having to worry about selling a stock during a downturn.

In fact, you can forget about having to save a million dollars at all: with a 6.8% average yield, you could glean a $46,800 yearly cash stream from a $688,236 nest egg, again without having to sell a single share. There’s no better way to “recession-proof” your future than that.

Here’s something else you should know about CEFs: a 6.8% average yield is actually on the low end of these funds’ dividend payouts.

Consider the 4 powerful retirement plays I’ve discovered, and will share with you when you click right here.

Thanks to these 4 CEFs’ top-notch management teams—one of which boasts 115 years of experience between them—you get something truly unique in these income-starved times: a safe 8.7% dividend yield!

And keep in mind that this is just the average. One of these stout income plays yields an incredible 10.7%.

At an 8.7% average yield, you can get our $46,800 income stream on half of what the suits at the big banks say you need—just a $540K nest egg! And you won’t have to sell a single stock in retirement to get it.

Click here to get these 4 amazing funds’ names, tickers, yields (did I mention some of these cash machines pay dividends monthly?) and everything else you need to know before you buy.