Forget Vaccines: This Will Ignite Stocks in 2021 (and Pay Us 6%+ Dividends)

Markets are betting on the federal government pumping $908 billion in stimulus into the economy. If that cash wave rolls out, it’ll boost the group of funds I want to talk to you about today. They pay dividends of 6%+ and trade at big discounts to their true value now.

The Current Stimulus State of Play

First up, while the final stimulus bill is still being negotiated by Congress, it seems likely we’ll get a version similar to what’s been released already when a compromise is reached. So let’s take a look at what’s on offer.

Before we go further, I’ll say that the government’s new stimulus bill looks more effective than the CARES Act passed in the spring.

If you remember that plan, it gave $600 a week in extra unemployment benefits to workers and long-term loans to small businesses to keep paying their workers and their operating costs. That last piece of the puzzle was a bit of a disaster; some big companies got millions of dollars, including hedge funds and other groups that were far from struggling before (or during) the pandemic. This money, of course, did little to prop up the economy.

If this new bill becomes law, it will send $288 billion to small businesses, with much of that aimed at helping those firms pay employees (with strict limits on which companies can get these funds).

Following that is $199 billion in support for housing, education and healthcare, including $16 billion for getting COVID-19 vaccines distributed and test-and-trace infrastructure humming. That money would go to local organizations and, through them, to workers. 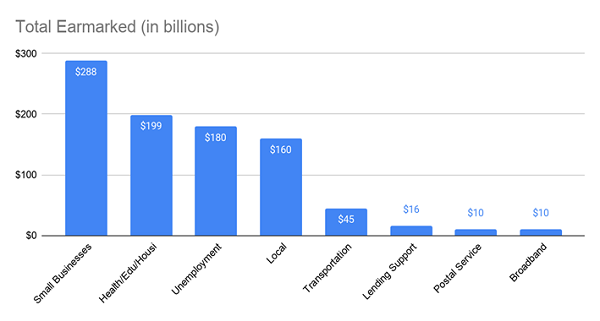 We could quibble over the $10 billion going into broadband, wondering if that money would just go to AT&T (T) and Comcast (CMCSA), but aside from that, I’m sure you can see where this is headed: it’s a cash transfer to consumers so they can use it for everyday spending. The $180 billion for unemployment, for example, comes as $300-per-week in supplemental benefits on top of what workers get through their state unemployment program.

How Stimulus II Could Lift the Economy—and Our Portfolios

Now let’s tie this back to our portfolios. The upshot here is that this stimulus bill focuses on one very important part of the economy: consumer spending.

Economists track this sort of thing through a measurement known as “real personal consumption expenditure,” a kind of barometer of all the things Americans spend money on, adjusted for inflation. That metric looked scary back in March.

With an 11% drop in personal consumption in the second quarter, it looked like our consumer-driven economy was in free fall, but that rebounded thanks in part to the first CARES Act, which helped bring spending back to just 3.3% shy of pre-pandemic levels. That number lasted even after CARES Act money dried up in the summer, thanks to a combination of reopenings and a shift in consumer-spending habits.

This new bill looks like it would get us back to pre-pandemic levels. We’re $437.8 billion shy of pre-pandemic spending, half of the $908 billion in the bill. This means we could even see spending overtake prior levels, depending on how successfully targeted this money is.

If consumer spending gains in the weeks following the approval of this new bill, who will benefit? The obvious winner would be consumer-discretionary stocks, which is why the Consumer Discretionary SPDR ETF (XLY) has been ticking up in recent days. 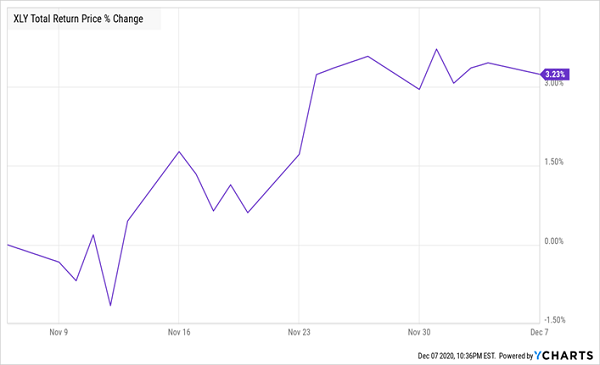 While these companies are positioned to benefit from the stimulus package, this fund doesn’t diversify our money that well. It also offers a miserly 1% dividend yield.

That’s where equity focused closed-end funds (CEFs) come in, especially equity-focused CEFs that either holding shares of consumer-discretionary stocks or hold blue chip US companies that make the products consumers will be buying.

Here are three equity-focused US CEFs trading at big discounts to net asset value (NAV, or the value of the stocks in their portfolios, and offering big dividends. All are worth further consideration as we move into 2021:

Note also that these three funds are just the start—and they’re not even my best CEF picks for high dividends and strong upside as the economy shifts to recovery mode in 2021.

In fact, I’ll share the names and tickers of 4 CEFs I’m pounding the table on for 2021 with you right now. They pay generous 8.1% dividends, on average, and they’re all irresistible bargains—trading at bizarre discounts that have them primed for 20%+ price upside in 2021. And that’s in addition to their steady 8.1% dividend payouts!

I’ve named these funds in an exclusive special report I’m making available to the public today, and I want to make sure you don’t miss your chance to grab it. Go right here and I’ll give you a copy, which will reveal all the critical data on these 4 income plays: names, tickers, best-buy prices, complete dividend histories—the works.