It’s a tired piece of “wisdom” you hear from personal-finance gurus over and over: you need to invest in low-cost, passive index funds to get the highest return.

Today we’re going to look at how obsessing over fees can cost you tens of thousands of dollars. Then I’ll name a fund that could get you big gains and pays a dividend north of 6%.

What’s more, this unusual fund, a closed-end fund (CEF), to be specific, gives you that steady cash payout while holding some of the biggest stocks out there—I’m talking about household names like Apple (AAPL) and Amazon.com (AMZN).

First off, though, our fee myth starts with a simple assumption: the lower the fees on a fund, the bigger your return. On its face, the myth makes sense. For instance, let’s say one fund has a 0.1% expense ratio and another has 1%. If you invest $100,000 in the first fund, the manager will take out $100 from your share of the fund’s portfolio to pay your fees; the second fund will take out $1,000, or 10 times as much. 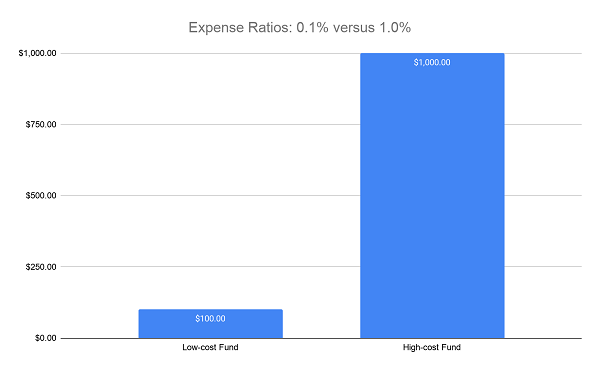 But there’s a huge, unspoken assumption behind the chart above, and the fee debate as a whole: that both of the funds you’re comparing are identical. That’s rarely the case.

What’s worse, obsessing over fees can cost you a lot in missed returns, as we’ll see in the example below.

The real problem with index investing isn’t the tiny differences in expense ratios but the different indexes out there.

Of course, there’s more than one stock index. While the S&P 500 tracks the US stock market broadly, with a focus on mid-cap and large caps, there’s also the large cap–focused Dow Jones Industrial Average, the small cap–focused Russell 2000 and the tech-focused NASDAQ 100, plus many others, as well.

So if you chose to put your $100K in the S&P 500, you’d be biasing it toward bigger companies. You’re also locking yourself into the index’s allocations to various industries, including some that have struggled mightily in the last decade (I’m looking at you, energy).

However, if you’d decided to emphasize the tech sector and focus the $100K you plan to put in the market in the NASDAQ 100, through the Invesco QQQ Trust (QQQ), you’d have set yourself up for bigger profits, despite QQQ’s higher fees (0.2% of assets) than those of SPY or VOO.

(Note that closed-end funds, or CEFs, let us split the difference here, with an actively managed approach that pays higher dividends than any of the major indexes pay and offers greater safety, too. I’ll give you a ticker that pays us that 6% dividend I mentioned earlier—in a second.)

The Index You Choose Matters 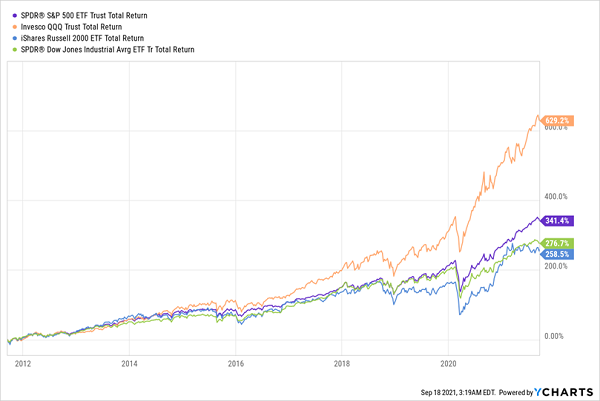 Over the last decade, QQQ has nearly doubled the performance of the S&P 500 (in purple). So an index investor who put $100,000 in QQQ instead of SPY earned a profit of $629,200 in a decade, or $287,800 more than one who invested in the S&P 500. Similarly, the conservative Dow Jones investor and the small cap risk-taker lost out to the S&P 500 indexer by thousands of dollars.

The obvious takeaway here is that indexing is not a passive choice, and choosing one index over another means attempting to ascertain which stocks are going to outperform. Expense ratios are a red herring, and being too focused on them can be very costly indeed.

Tech’s Biggest Gains Are Still Ahead

Let’s keep our focus on tech, because despite what most folks think, it still has plenty of room to run as the pandemic recedes, despite investor worries the sector is due for a pullback.

More consumers are buying through Amazon, which is building its own delivery system to displace FedEx (FDX) and United Parcel Service (UPS). Alphabet (GOOGL) continues to dominate in search, video-sharing and smartphones, and Facebook (FB), despite its controversies, was a fixture for socializing through its Messenger app and its main page through the pandemic. And we’ve got a fundamental shift away from cinemas that’s unlikely to go away anytime soon, sustaining the gains market leader Netflix (NFLX) saw in the pandemic.

That’s just the bull case for FAANG stocks, but the rest of the tech world is becoming even more important both in the US and around the world.

This Tech-Focused Closed-End Fund Pays You 6.1%

You could get into this market with QQQ, but there’s another option that’s both safer and provides a big income stream: a 6.1% dividend yield, so your $100,000 will get you $525 per month in dividends.

Its name is the Nuveen Nasdaq 100 Dynamic Overwrite Fund (QQQX), and it invests in the NASDAQ 100 index with an “active” twist: its management team sells call options, a kind of insurance on its portfolio, and passes the income from those options to investors. This is what fuels its high dividend. That, in turn, helps tone down QQQX’s volatility, as you’re getting more of your return in cash, rather than ephemeral paper gains.

This also makes QQQX a rare income play in the tech space. And unlike many funds like it, QQQX doesn’t trade at a premium to its portfolio value, so you’ll be getting what you pay for.

QQQX is just one of many closed-end funds that get you exposure to a great index and a big income stream. But there are many more that go beyond that and crush their indexes by massive margins. Index investors who have ignored them have been missing out on bigger returns for years.

My top 4 CEF picks now give you the best of all worlds, delivering a strong 7.3% average payout, plus totally unusual discounts to their true value. That’s why my latest analysis calls for 20%+ price upside in the next 12 months!

Put it all together and you could easily be looking at a solid 27% in price gains and dividends by this time next year.

Simply click right here and I’ll give you the full story on all of my top 4 picks in a special investor report.