How to Buy Buffett’s Best Stocks at a 19% Discount

Don’t look now, but year-to-date, Berkshire Hathaway (BRK.A, BRK.B) stock is up 25% and is actually outperforming the incredible 20% a year, on average, it’s returned since 1964.

A Chart Any Investor Would Love 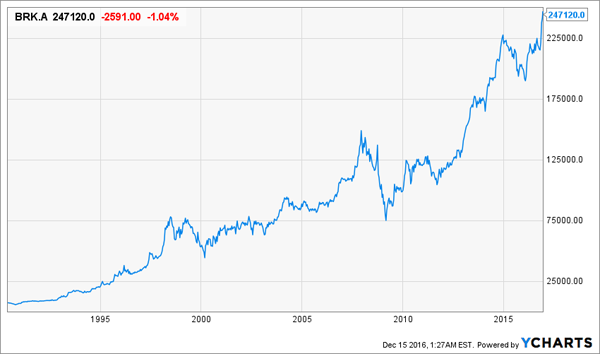 In a moment, I’ll show you an overlooked investment that lets you duplicate the moves of the world’s smartest investor—and you won’t have to buy a single share of Berkshire Hathaway to do it.

In fact, you’ll be able to pick up Berkshire and the companies it invests in for 19% less than you’d pay on the open market!

Berkshire’s year-to-date gain has come, in part, thanks to the financial industry’s recovery post-election. That makes sense, since the company depends on income from wholly owned Geico Insurance and is a big shareholder in Goldman Sachs (GS) and Wells Fargo (WFC).

Take a look at how BRK’s performance has drawn closer to that of the Financial Select Sector SPDR Fund (XLF) since November 8: 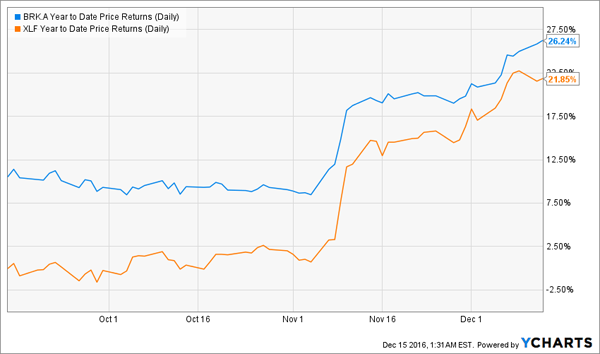 Clearly, Berkshire is a great long-term investment, but Buffett doesn’t like overpaying for a company, and neither should you. Like him, you should look for a way to get Berkshire’s holdings for less than their market price.

Which brings me to the universe of closed-end funds (CEFs).

This corner of the market is small, less popular than ETFs or mutual funds and slightly more complex. These are good things, because we can use CEFs to get assets at massive discounts, as their lack of popularity means the market often misprices their underlying assets by huge margins.

Such is the case with the Boulder Growth & Income Fund (BIF), a relatively unknown fund managed far from Wall Street—just like Berkshire Hathaway. Its purpose is to closely mimic Berkshire, which is why its top holdings are mostly in Berkshire stock or companies Buffett owns and likes: 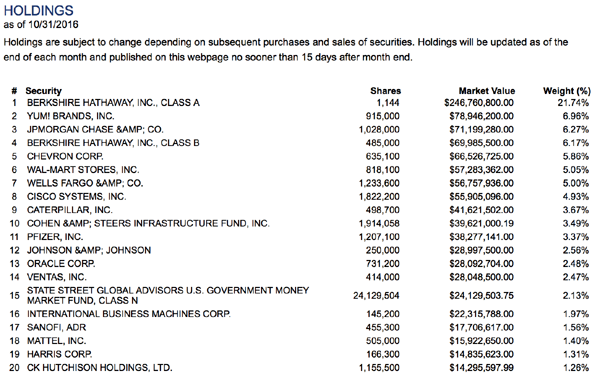 As you can see, Berkshire’s class A and B shares account for 27.9% of the fund’s assets, while popular Berkshire stocks, like JPMorgan Chase & Co. (JPM), Wells Fargo (WFC) and Johnson & Johnson (JNJ), make up another sizeable portion of the fund. On top of those are solid growth stocks like Yum Brands (YUM) and Chevron (CVX).

A quick look at how BIF’s top holdings have performed this year shows some pretty impressive returns: 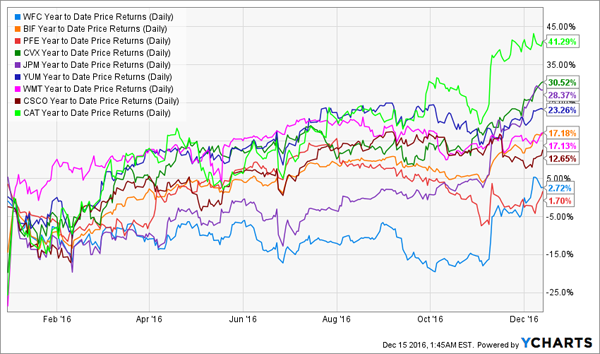 Yet if we buy $1 in BIF shares, we’re not just getting $1 in shares of these companies; we’re actually getting about $1.19.

Why? Because the market has priced BIF at a 19% discount to its net asset value (NAV).

There is a catch, of course. BIF charges a fee, like any fund, and its 1.5% fee is high. However, the fund’s NAV has gone up 20% year-to-date (note that this is a post-fee return), so you really are paying for outperformance with BIF. For that reason, I consider the high fee tolerable, considering the fund’s outperformance and massive discount to NAV.

The reason for that big discount is that BIF didn’t pay a regular dividend for a long time, and CEF investors like dividends. But, unlike Berkshire, BIF now pays a dividend after management changed its policy this year. And it’s an attractive payout at that, now yielding 4.5%—more than double the S&P 500 average—after a recent hike. BIF pays monthly, too, which is handy if you’re leaning on it to pay the bills.

I fully expect more investors to take note of that yield in the next few years and jump in—driving the share price even higher.

That’s just not good enough, particularly now, with inflation set to take an even bigger bite out of your income stream.

That’s precisely why I’ve developed my new 8.0% “No-Withdrawal” retirement portfolio. As the name suggests, it lets you generate enough income to clock out of the workforce and collect a safe—and growing—$40,000 income stream.

And you don’t have to be a millionaire to do it. Thanks to my portfolio’s outsized yield, all you need is a modest nest egg of $500,000.

This is hands-down the best way to invest for retirement, because it means you’ll never have to sell a single stock to keep that income rolling in.

Click here to get an inside look at this portfolio and see how easy it is to kickstart your own 8.0% income stream today.