4 Stocks Insiders Are Loading Up On – and You Should Too

If you’re cutting back on stocks because interest rates are rising, you’re making a mistake.

But don’t just take my word for it (after all, I am a dyed-in-the-wool dividend-stock fan). Ask Ned Davis Research, which released its latest research on the relationship between stocks and rates about a year ago.

The finding? When the Fed moved slowly on rate hikes, stocks dropped immediately after each announcement … but went on to gain 10.8%, on average, in the next 12 months.

And as I’ve mentioned before, when Ned Davis’s researchers took a longer view—from January 1972 through December 2014, a period that saw far faster rate hikes than we’ll likely see this time around—they found that dividend growers outshine any other kind of stock, and not by a little.

Of course, running out and buying a stock just because it’s raised its dividend for a few years won’t cut it. To make sure your dividends keep growing—and driving share prices higher—you need to look at factors like earnings history and payout ratios (the percentage of earnings headed out the door as dividends).

To add some downside protection, you’ll also want to zero in on stocks trading at low multiples to earnings, book value or, in the case of real estate investment trusts (REITs), funds from operations (FFO).

I know what you’re thinking: finding all these things in one stock is a tall order—particularly these days, with the S&P 500’s P/E ratio sitting at a nosebleed 24.9.

Luckily, I’ve got an easy way for you to zero in these companies.

I’m talking about insider buying. Because if you want to know whether earnings—and ultimately share prices and dividends—are headed higher, who’d know better than management?

It’s an old Peter Lynch truism: “Insiders might sell their shares for any number of reasons, but they buy them for only one: they think the price will rise.”

With that in mind, here are four terrific bargain stocks insiders are loading up on now. All have either just announced, or look set to announce, outsized payout hikes.

Pfizer: Profit Along With the C-Suite

Pfizer (PFE) group senior VP Alexander Rod Mackenzie made a smart and timely move on December 7, when he snapped up 30,000 PFE shares, worth a total of $776,100.

Why? Because Mackenzie bought just before Pfizer typically announces a dividend hike.

And just like clockwork, PFE hiked its payout on December 12, this time by a bigger-than-expected 6.7%, putting a nice lift under the share price. So if you’d followed Mackenzie’s move, you’d already be up 4.9% … plus you’d be yielding 4.1%, on a forward basis, compared to the 3.9% forward yield on the stock today, thanks to the payout hike.

Not a bad week! 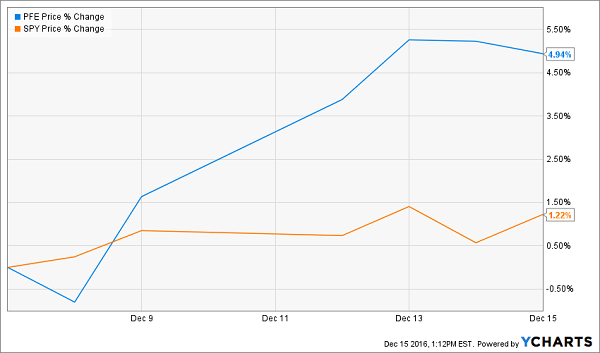 Further dividend growth is a lock: the company paid out a reasonable 56.6% of free cash flow to shareholders in the past 12 months, and its balance sheet sparkles, with $44.1 billion of long-term debt, or just 22% of PFE’s market cap, and $14.4 billion of cash.

GT: A Dividend in Overdrive

But the headline numbers mask the real point, which is how well management is steering through the fluctuating tire market. Even though revenue fell 8.1% in the latest quarter, EPS jumped 18.2%. Gross margin widened to 28.9% from 28.3% a year ago.

And longer term, the company stands to gain as the boom in new-car sales wanes and drivers buy more replacement tires.

Insiders clearly felt the plunge was overdone—and they pounced:

They’ve been handsomely rewarded, with the stock surging 16.4% since October 28: 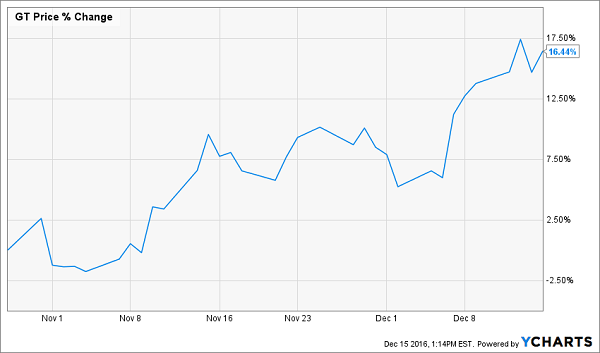 If you missed out, don’t worry. Because despite the rise, GT is up just 0.8% from the start of the year and trades at a ridiculously low 7.7 times forecast 2017 earnings.

Goodyear isn’t normally the kind of stock investors look to for dividends, due to its trailing-twelve month yield of just 0.9%, but it’s doubled the payout in the past five years, including a 30% hike declared last July: 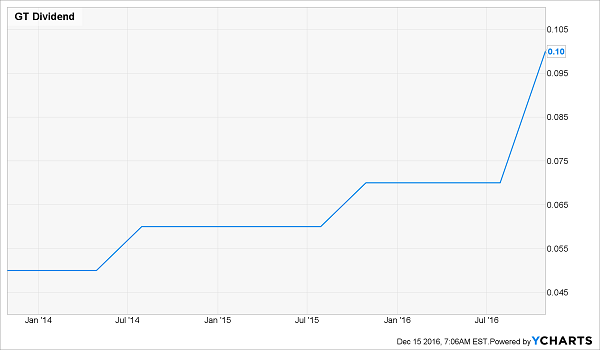 With a payout ratio of just 23.2%, GT has plenty of room to deliver another big hike this summer.

But its history of dividend growth is exciting—or at least it could be: this year marked the company’s 45th straight year of payout increases. But most of those hikes have been ho-hum. To find an increase of more than $0.01, you have to go all the way back to 2007: 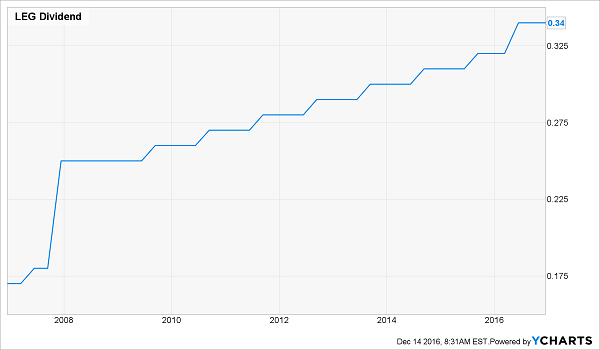 But as you can see in this chart, this year the company picked up the pace, juicing its quarterly payout by $0.02—and doing so a quarter earlier than normal. Here’s how the stock responded over the following three months: 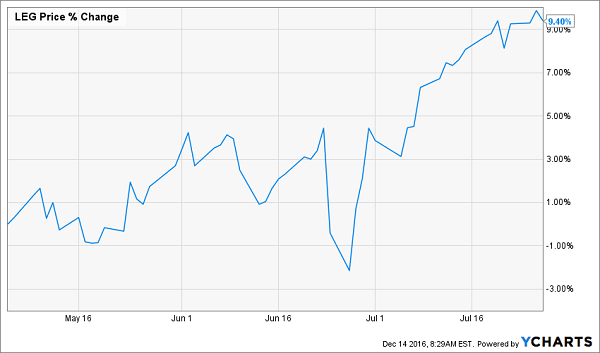 That’s a particularly bullish sign, and the stars are aligning for this 2.7% yielder to do even more on the payout front in 2017.

For one, its payout ratio sits at an easily manageable 45.7%, trailing-twelve-month earnings are soaring and its balance sheet is healthy, with just $1.1 billion of long-term debt—or just 16% of its market cap. 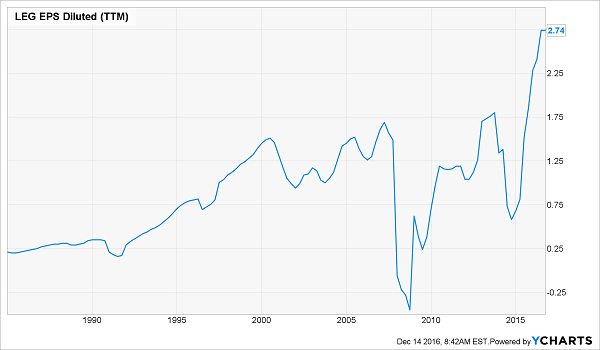 Insiders agree: they’ve been making a steady stream of purchases over the past year, with the largest one, valued at $366,190, coming just one month ago, on November 16.

Right now, LEG trades at 18.8 times forecast 2017 earnings. That’s above its five-year average forward P/E of 18, but it’s still reasonable given the company’s potential to profit from as consumer spending, employment and wage growth accelerate.

DDR: Is History About to Repeat?

Last week I sent out a buy call on DDR Corp. (DDR), a REIT with 352 malls across the US. I did it because DDR is a top-quality retail trust that’s been caught in the downdraft as rate fears sent investors fleeing from higher-yielding assets.

That’s great for us, because it means we can snap up this ignored midcap retail REIT at just 11.6 times trailing-twelve-month FFO, a big discount to market leader Realty Income (O) at 19.4.

And history shows that, despite investor hand wringing, buying DDR as rates take off has been a smart move. Look at the drubbing the REIT laid on the SPDR S&P 500 ETF (SPY) in the last sustained rising-rate period, from July 1, 2004 to July 1, 2006: 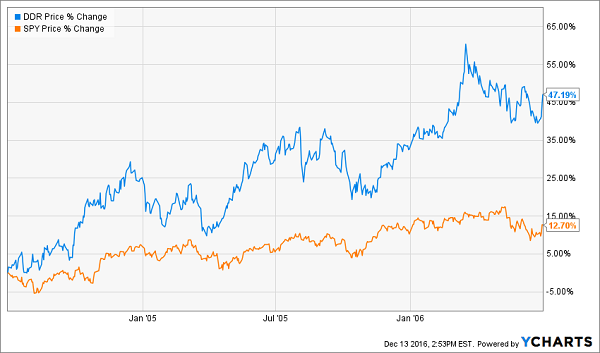 Could we be in for a replay? Board member Alexander Otto seems to think so. Look at the buys he racked up in November:

And I don’t think it’s a coincidence that these purchases matched up perfectly with a dip in the stock price, which drove DDR’s yield up over 5.0%. 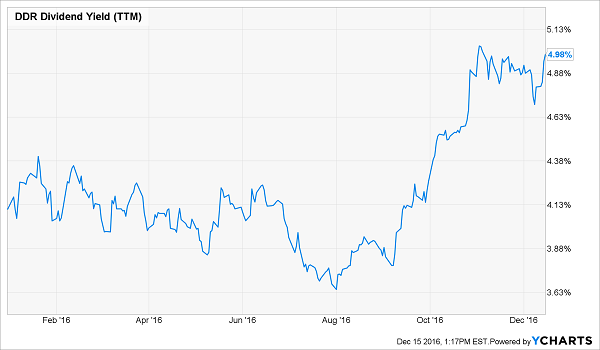 And that payout is well covered at 58.0% of trailing-twelve-month FFO.

The kicker? DDR typically announces dividend hikes in the first week of January, and in the last two years it’s rolled out increases of 10.1% and 11.3%, respectively. Look for a similar-sized hike in a couple weeks’ time.

DDR is a perfect buy in this overheated market: it’s cheap, it’s throwing off double-digit dividend hikes and it’s in a steadily growing industry.

But my team and I have zeroed in on 3 stocks that will hand you even faster dividend growth than any of the 4 companies above. And I expect that to continue for years to come, thanks to their lean operations and fast-growing industries.

That, in turn, will drive share price gains of 200%, 300% and more in 6 years or less! And thanks to their outsized payout growth, you’ll be yielding a safe 12%+ on your initial investment in no time.

Because that’s exactly what each of these 3 winners has done since 2011. Take a look at how one of these picks marched higher as its dividend soared: 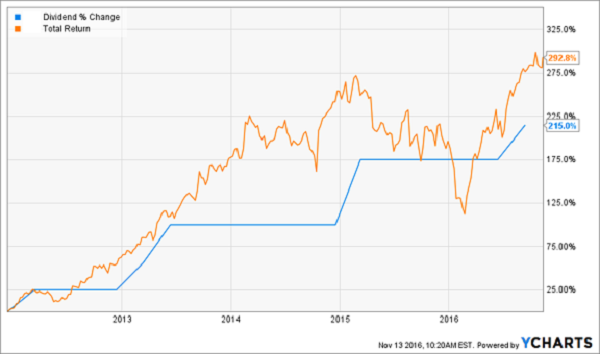 And thanks to overdone interest rate fears, all 3 of these unsung dividend growers are setting up for a repeat performance.

I urge you to make your move now, while you can still get these stocks at a bargain. Go right here to all the details and discover my proven dividend-investing strategy for yourself.