If you’ve read my columns on Forbes and Contrarian Outlook, you know my heart belongs to dividend-growth stocks.

The reason is simple: dividend growers outperform every other kind of stock there is.

But don’t just take my word for it. Study after study backs that up, including an exhaustive one by Ned Davis & Associates that zeroed in on the 43-year period from January 1972 through December 2014.

Here’s what they found:

It’s tough to argue with those numbers—especially over a period spanning nearly half a century!

But as I wrote last week, you can’t just run out and buy an exchange-traded fund like the Vanguard Dividend Appreciation ETF (VIG).

VIG is a long-time investor favorite, but for the life of me, I can’t figure out why. Because despite its inherent advantage, it has only barely managed to edge out the SPDR S&P 500 ETF (SPY) in the past decade—even when you take dividends into account. 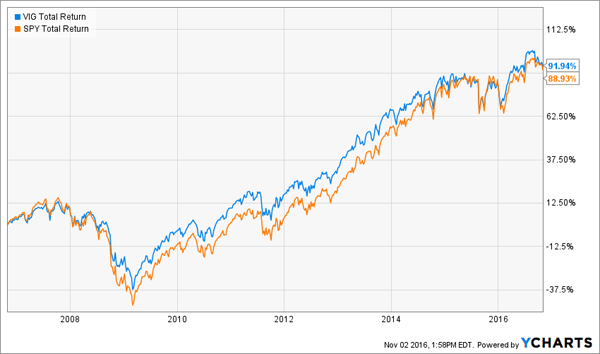 It’s a textbook example of why you need to ignore the passive-investing crowd and zero in on individual stocks with a magic combo of regular double-digit dividend hikes and bargain valuations.

Even better if you can jump in just before they announce a big payout increase. It’s like getting a raise on your first day on the job! And the announcement move the stock price, too.

With that in mind, here are two screaming buys I expect to roll out double-digit payout hikes within days, plus one that just did but is still a great buy now.

If you own shares of McDonald’s (MCD), Yum! Brands (YUM) or some other fast-food colossus, take note: there’s a “restaurant recession” going on as more people dine in instead of heading to the local burger joint.

Why? For one, restaurants’ costs—and menu prices—are rising as minimum wages head higher in many states. That comes as a glut in beef, pork and other crops has been eating away at the average American grocery bill for 10 straight months.

McCormick & Co. (MKC), the world’s largest spice maker, is cashing in: the company gets the majority of its sales from the grocery store, and its top and bottom lines already had plenty of kick, even before household food bills started falling: 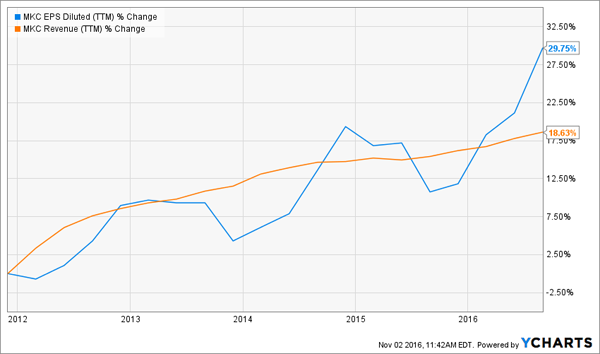 McCormick’s current yield isn’t exciting, at 1.8%, but its dividend growth certainly is: in the past decade, it’s sweetened its monthly payout by 11.4% a year, on average, so the yield on your initial buy will head north in short order.

Throw in a low payout ratio—only 48% of earnings have gone out the door as dividends in the last 12 months—and management has room to do a lot more, which I expect it to in the third week of November.

A bonus: this stock thrives during recessions. During the financial crisis, for example, MKC fell a lot less than the S&P 500 … and rebounded a lot faster. It kept the dividend hikes coming, too! 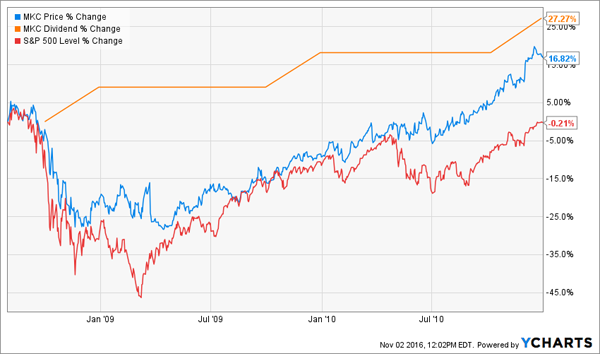 MKC isn’t a bargain, per se, trading at 25 times forecast 2017 earnings, but the shares have pulled back from a high of $107 in July to around $95. That’s a solid entry point for a company growing profits at a high-single-digit rate, as McCormick is.

Snap-On: A Dividend Grower on a Roll

Snap-On (SNA) announced a 16.4% increase in its quarterly dividend, to $0.71 from $0.61, last Thursday night. But I’m including it anyway, because this overlooked dividend grower looks primed for big gains and another double-digit payout hike in 2017.

Like McCormick, the toolmaker boasts and unexciting yield: just 1.6% today, but its payout has grown more quickly than McCormick’s: 12.5% annually over the past decade.

And even though it gets lumped in with cyclical industrial stocks, Snap-On didn’t cut its payout during the recession, and it’s doubled it in the last six years: 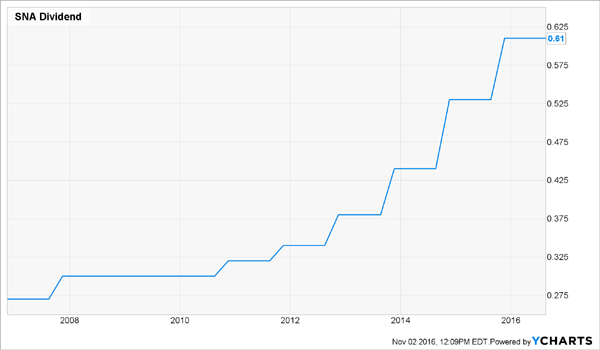 Worries that auto sales have plateaued have held Snap-On shares back this year. The stock now boasts a forward price-to-earnings ratio (P/E) of 16.7, a discount to the market and well below its five-year average of 18.3.

That’s way too cheap for a company that benefits from America’s geriatric vehicle fleet, which is 11.5 years old, on average, and will keep mechanics hopping for years to come.

And let’s not forget Snap-On’s revenue and earnings, which have been in overdrive for seven years. 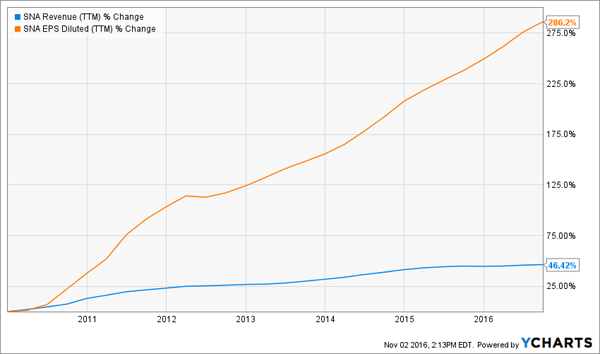 The beat goes on: next year, analysts expect the company to earn $9.13 a share, up 13% from this year’s forecast.

Throw in a payout ratio of just 27%, and this sturdy dividend grower is primed to reward investors for years to come. Let’s grab a position now.

Prudential Financial (PRU) reported adjusted earnings per share of $2.66 on November 2, up 7% from a year ago and well ahead of the $2.49 analysts expected.

Investors sent the stock up more than 4% in response, perhaps finally catching on to the fact that insurance companies will be just fine, even if low interest rates persist. (Insurers typically struggle in low-rate environments because they invest the premiums they collect in safe, interest-bearing securities.)

But don’t worry: there’s still plenty of value here, despite the rise. PRU currently boasts a forward price-to-earnings ratio of 9.8, a discount to rival MetLife (MET) at 10.4. It also trades at just 68% of book value—or what it would be worth if it were broken up and sold off today!

What’s more, dividend growth is one of the most reliable drivers of a company’s share price, but in the past three years PRU’s surging quarterly payout, which has risen 75%, has failed to move the stock. This latest rise suggests this trend may be reversing: 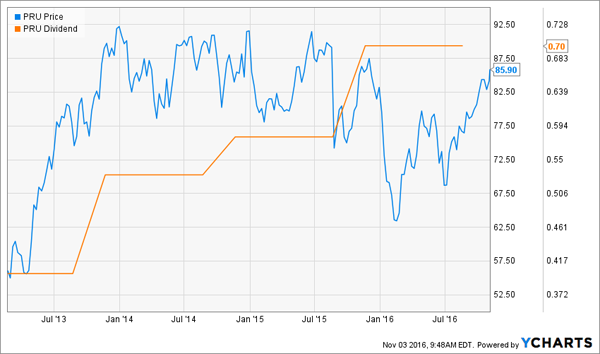 We’ll likely know for sure in the next couple days, when I expect PRU to announce a double-digit dividend hike, following last year’s 21% increase. With the company’s rising earnings and low payout ratio—which clocks in at just 27%—management certainly has room to move.

Meantime, with the payout growing the way it is, you won’t need much pop in the share price to make a profit. And the stock’s attractive valuation and above-average 3.2% dividend yield offer some nice downside protection, too. Grab this one now, before it races ahead any further.

Revealed: A Crash-Proof Retirement Portfolio With an 8% Yield

All 3 of these stocks are great buys now, but even with their double-digit payout hikes, they just can’t deliver enough to achieve what every investor should be shooting for: a retirement portfolio that lets you live on dividends alone.

A portfolio built this way is far more durable during market downturns because it doesn’t trigger every retiree’s worst nightmare: a slew of dividend cuts that forces you to sell shares (slashing your income even more) to make up the shortfall.

That’s where my “No-Withdrawal” retirement portfolio comes in. It lets you sail above any market panic, pocketing safe 6%, 7%, 8% (and higher) payouts without having to sell a single share.

The 6 overlooked investments that make up this portfolio come from 3 ignored asset classes known to throw off safe yields that double up, triple up—and even quadruple up—those of your average S&P 500 stock.

Click here to learn the full strategy and get my 6 best buys for a safe 8% average yield now.