How to Front Run “Dividend Splits” for 123%+ Returns

Most investors are familiar with stock splits, but the real money is made when dividends “split.”

I’m talking about secure triple-digit returns in just 5 years (or less). And you could wind up with two dividend streams instead of one!

I’ve seen this strategy pay off time and time again.

And there’s really only one step: buy a recently spun off dividend-growth stock (or hold on to the “new” company if one of your holdings splits up) and tuck it away. Then watch as one—or both—take off into the stratosphere, cranking up their payouts as they go.

In the next few paragraphs, I’ll show you 2 spinoff stocks that have done just that, handing shareholders a 123% average return since they broke off from their parent companies no more than 5 years ago. And they still have plenty of growth ahead.

The Power of the Spinoff

If you need proof that spinoffs work, I’m going to throw out a name you’re probably not expecting: General Electric (GE), a company that, as I showed you in a November 20 article, was throwing off plenty of warning signs before management slashed the dividend by 50% on November 13.

(By the way, I hope you’re not thinking about gambling on GE just to grab its ho-hum 3% dividend, after it just reported a $9.8-billion quarterly loss; faces an SEC accounting investigation; and has a dividend that’s still on thin ice due to the ongoing losses and negative free cash flow!)

But there is one reason for keeping GE on your watch list: the chance it could break up in the months ahead. Because the last GE spinoff did very well for investors who chose the new firm over the creaking parent. Check out this chart:

The One Thing GE Did Right 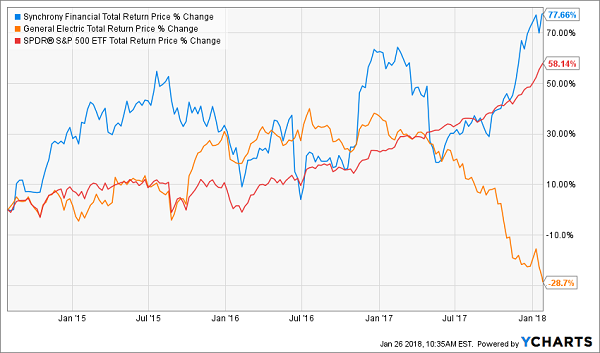 Here we see the performance of Synchrony Financial (SYF), the largest purveyor of private-label credit cards in the US (blue line), compared to the parent company (orange line) and the benchmark SPDR S&P 500 ETF (SPY), shown in red, since GE spun off SYF back in July 2014.

Before you ask, no, Synchrony isn’t a one-off. Plenty of research has shown that spinoffs pay off for investors. The latest, a 2014 study from Deloitte, found that new spinoffs gained an average of 22% a year after separation; parents rose 14%.

As for Synchrony, there’s plenty of reason to think there’s more in the tank.

For one, as I wrote on January 23, there’s no better driver of share prices than dividend growth—particularly accelerating dividend growth—and Synchrony has room to build on its first dividend hike, a nice 15% boost last year, if management chooses to.

Even though it yields a mere 1.5% now, Synchrony pays out a microscopic 17% of earnings per share (EPS) and 5% of free cash flow as dividends, so double-digit payout hikes are in easy reach here, which would spike the yield on your initial buy.

What’s more, over the past year, Synchrony has been buying back its own stock hand over fist to jump on its cheap valuation—just 11.7 times forward EPS: 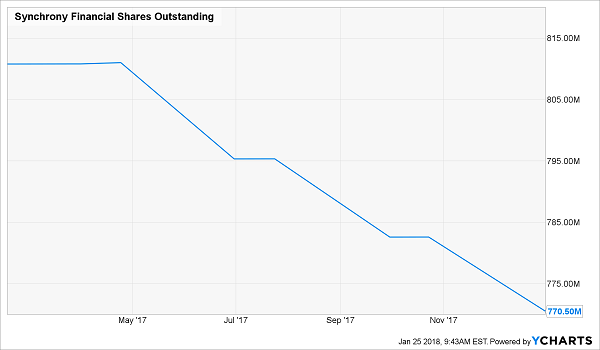 Pfizer (PFE) launched a growth rocket when it spun off Zoetis (ZTS), a maker of medicines for animals, in February 2013. And Zoetis has followed the usual spinoff pattern, clobbering its parent (orange line below) and the S&P 500 (red line). 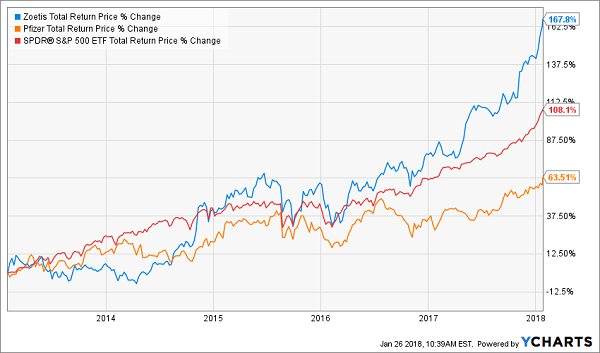 The stock isn’t cheap at 26 times forward earnings, but that’s right around its five-year average—and there’s a reason for that higher P/E: Zoetis is on a growth tear that has years, if not decades, to run.

Because it’s smack in the middle of a surging trend. According to the American Pet Products Association, 84.6 American homes have at least one pet, a big jump from 79.7 million in 2015.

The company also has a livestock division that stands to cash in as meat consumption soars: according to the OECD, farms around the world will churn out 17% more meat by 2024.

And Zoetis is cashing in, turning both trends into surging earnings and free cash flow: 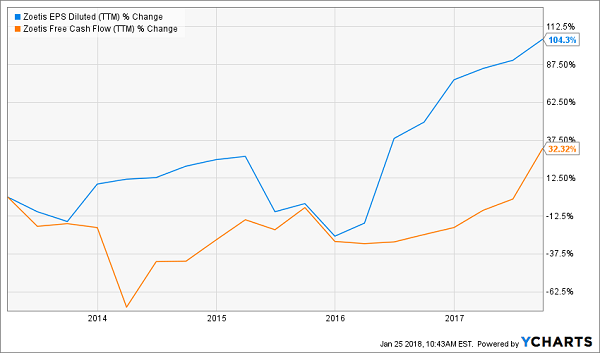 Zoetis isn’t on any dividend hound’s wish list, due to its microscopic 0.6% yield, but we’re likely at the beginning of a series of accelerating dividend hikes—starting with the monster 20% boost management dropped in December.

And check out how Zoetis’s stock has stair-stepped higher each time the payout has.

Where the Dividend Goes… 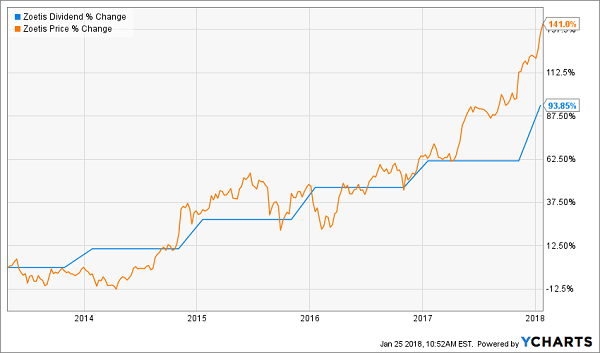 Notice how the share price rose in time with the dividend, then took an extra leap higher with that big December hike?

We’ll likely see more of that, thanks to two things: Zoetis’s surging EPS (up an incredible 25% in Q3) and ultra-safe payout ratios of 22% of earnings and 25% of free cash flow. This one is a great “buy and hold forever” candidate.

Revealed: 7 Buys to DOUBLE Your Money Every 3 to 5 Years

I just released my 7 best buys for 2018. Each one is set to hand you a safe 100% GAIN every 3 to 5 years—like clockwork! And they’ll hand you an income stream 3 TIMES larger than you’ll need in retirement!

The lucky owners of these 7 cash machines are profiting from the same formula that’s delivered massive gains to Synchrony and Zoetis buyers: an accelerating dividend that’s powering the share price higher.

I hate to see folks make investing complicated when there’s a simple, proven strategy like this to grab on to, starting with the 7 incredible dividend-growth plays I’m going to show you now.

All 7 are cheap, but that won’t last; first-level investors will take notice as the surging US economy powers their profits (and dividends) higher. By that time, the biggest gains will already have been made.

Don’t miss out. CLICK HERE and I’ll give you the names, tickers, buy-under prices and all my research on these 7 income (and growth) plays.