Let’s dive into the General Electric (GE) dividend massacre that sent the market reeling last week. When the dust settled, the payout took a 50% haircut, and the stock had plunged about 11%.

Before I go on, I should tell you that GE isn’t the only household name I’m worried about. Further on, I’ll show you another investor “sacred cow” that’s showing some eerily similar signs. Then we’ll look at an unloved pharma play that’s more than worth your attention now.

First, let’s pick through the GE wreckage and see what we can learn, and where the stock could go from here.

Why did GE’s cut catch so many folks off guard? Simple: a well-known name and a 125-year history fooled the masses into thinking this dividend was safe … when it was anything but.

I’ve written before about the payout ratio, which is the percentage of earnings or cash flow paid out as dividends.

Most folks zero in on the net income payout ratio, or how much profit is going out the door as dividends. That’s a problem, because net income is an accounting number that can easily be manipulated.

I prefer to look at free cash flow (FCF), or the amount of operating cash flow left over after capital expenses. Think of it as a snapshot of how much money a company has on hand to repay debt, buy back shares or pay dividends at a given time.

Even from a net-income standpoint, GE’s dividend looked shaky: the payout had been eating up 77% of trailing-twelve-month earnings as of June 2016 and rose past 100% by the end of the second quarter of 2017. 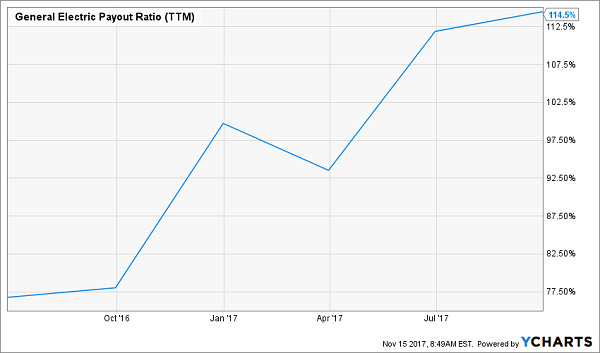 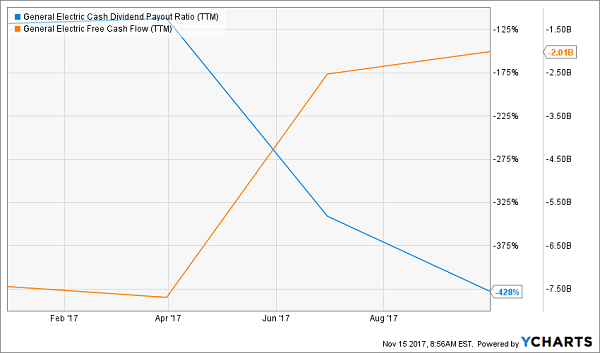 That’s right: GE had been paying its dividend despite generating negative cash flow! And it even raised the payout in September 2016! 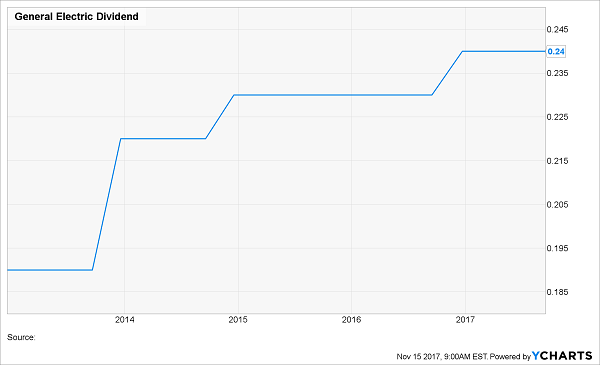 Something had to give.

As I’ve told you before, dividend growth is the most important driver of share prices, and even after the cut, GE will still be paying out 60% to 70% of forecast 2018 FCF as dividends, well above my 50% margin of dividend safety: 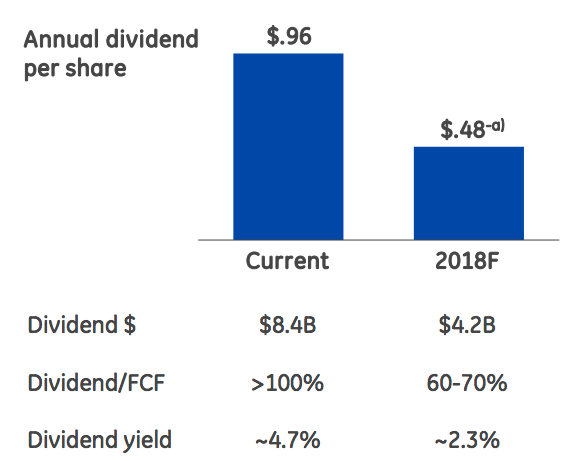 Worse, GE still trades at 17.8 times the midpoint of management’s forecast 2018 EPS of $1.00 to $1.07 a share, which is down from this year’s forecast estimate of $1.05 to $1.10. That’s pretty rich when you could just go with the bargain stock I’ll have for you at the end of this article—and this pharma giant boasts rising earnings, FCF and dividends!

More on that in a moment. First, let’s look at another investor favorite that’s showing some of the same worrying signals as GE.

Coca-Cola (KO) is a dividend stock I put on my “caution” list on August 19. Three months later, I’m still concerned.

Before I go further, let me be clear: Coke—and its payout—aren’t going away. It’s a behemoth and a Buffett favorite that threw off $37.3 billion in revenue in the last 12 months, along with $4.6 billion in profits and $6.1 billion in FCF.

The problem? It paid out $6.18 billion in dividends in that same period (shown in the orange line in the chart below)—more than FCF and net income: 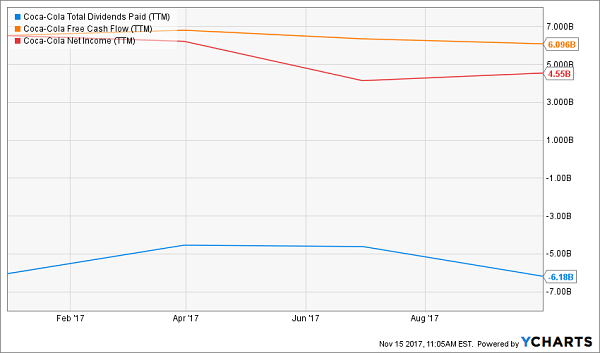 The bottom line is that Coke’s move into “healthier” products (like Coke Zero, Coke Life and vitamin water) hasn’t delivered sales growth. Quite the opposite: Coke hasn’t reported higher quarter-over-quarter revenue since Q1 of 2015. That was 10 quarters ago!

The company does have reasonable debt ($49 billion, or 24% of its market cap), so it can keep the payout going. But I know I don’t have to tell you that borrowing to pay dividends isn’t sustainable.

And even if Coke keeps up its paltry $0.02-per-year dividend increases, you’ll wait a long time for the yield on your initial buy rise much higher than today’s 3.1%.

So take a pass on Coke, especially at its nosebleed P/E ratio of 45, and bump the following company up your shopping list instead:

A Pharma Star With a Scorching Payout

Right off the hop, we see Amgen (AMGN) has something GE and Coke lack: a surging dividend. The biotech giant’s payout has soared 145% in the past five years.

That’s helped the stock nearly double—but as you can see in the chart below, the dividend stopped pulling the share price higher two years ago, causing Amgen’s yield to widen from 1.9% to 2.7% today—a nice premium on the S&P 500’s 1.9%: 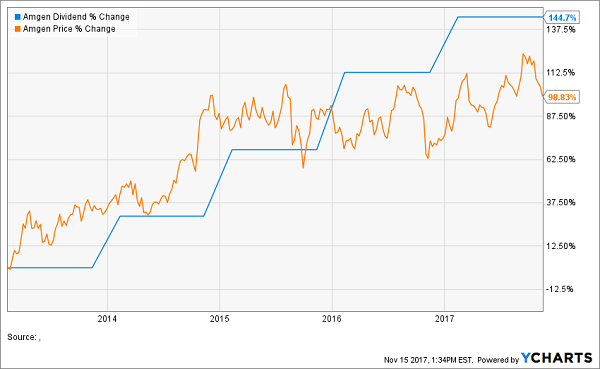 This is because of headline-driven worries about competition from biosimilars (or nearly identical competitors) for Amgen’s older drugs, like Neupogen (chemotherapy), Neulasta (a white-blood-cell booster) and Epogen (anemia). Its top-selling Enbrel arthritis treatment is also getting long in the tooth.

Management can also use Amgen’s huge cash hoard to unleash the next growth spurt, either through acquisitions or R&D. And when I say “huge” I’m not kidding: at $41.4 billion, it’s a third of Amgen’s market cap and more than its $35.6-billion long-term debt!

As for the dividend, another hike looks certain this February, when I expect a double-digit increase in the wake of Amgen’s 15% hike last February. Those hikes should keep coming: the payout occupies just 40% of net income and 31% of FCF.

And even with a higher payout, Amgen’s rising revenue, EPS and FCF will keep its payout ratios in check:

3 Signs of a Sturdy Dividend 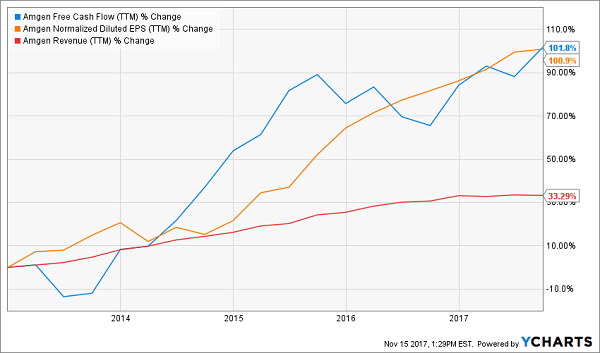 The kicker? Amgen trades at just 15.3 times earnings, below its five-year average of 18.3—cheap for a cash machine like this.

Here’s How to Earn 12% Every Year Forever

Let’s be honest, a 2.6% dividend yield like Amgen’s gets little respect from most folks. After all, even a little good news could send the stock price more than 2.6% higher in a single day!

But when you look long term, you can quickly see how even a low yield can make a huge difference to your overall return—but only when you add dividend growth.

Look at the 5-year return Amgen investors pocketed including dividends (in the orange line below) vs. without: 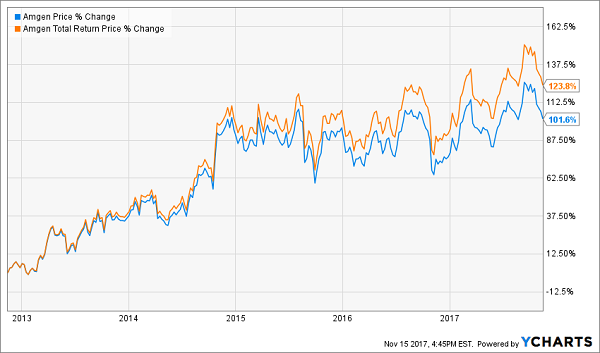 Dividend growth like that—and even faster—is precisely what’s behind the portfolio I want to show you now: it’s a set of 7 ultra-conservative stocks I handpicked to hand you 12% in safe, annual returns for life.

Because that’s more than enough to double your portfolio in 6 years and give you 3 times more income than experts say you need in retirement.

What stocks am I talking about here?

You’re not going to find companies backed only by big brand names (I’m looking at you, GE and Coke) in my “12% for Life” portfolio. And you won’t find so-called “safe” but slow-growth pundit favorites like ExxonMobil or Verizon, either.

This portfolio is retirement catnip because it provides the best aspects of numerous types of investment strategies—income, growth and even nest-egg protection!

Let me show you the way to double-digit returns that you can actually depend on. Click here and I’ll GIVE you 3 Special Reports that show you how to earn 12% for life. You’ll receive the names, tickers, buy prices and my complete analysis of these 7 stout dividend growers absolutely FREE!