The Fed Just Made These 7% Yields a Buy

The Federal Reserve’s rate hikes getting you down? You’re not alone.

A lot of readers have written in, worried that the Fed’s plans to increase interest rates in 2018 are going to hurt their portfolios. Investors starved for income have been piling into high-yielding assets that could get hit by a selloff if interest rates rise.

Those assets would go down because when the Fed increases interest rates, it causes rates all around to go up. So if you hold a bond that pays an interest rate from before that rate hike, its resale value will decline because there are now new bonds that pay higher interest rates, which makes the older, lower-yielding bond less desirable.

Fortunately, there is a small market that doesn’t suffer from this problem: senior secured loans.

Senior secured loans are low-risk and generally low-yielding debts that companies take out at a floating rate. Unlike bonds that have a fixed rate, the interest payments on these loans can change—which means these payouts will go up if interest rates go up, too. That also means these loans will increase in value as the Fed hikes rates.

It’s a much smaller market than corporate bonds, but it’s big enough for closed-end funds (CEFs), which are themselves a pretty small market. In fact, there are three funds that invest in senior secured debt that pay out over 7% in dividends. All three should go up in value next year.

(I also recently spotlighted 5 other low-key funds that are set to soar next year. You can read about those here.)

On top of that, the three funds I’m going to show you today are trading at massive discounts to their net asset value (NAV). In other words, thanks to the strange structure of CEFs, their market prices don’t always match the value of the assets they hold. And right now, the Ares Dynamic Credit Allocation Fund (ARDC), Blackstone/GSO LS Credit Income Fund (BGX) and Blackstone/GSO Strategic Credit Fund (BGB) are all trading at over 7% discounts to their NAV: 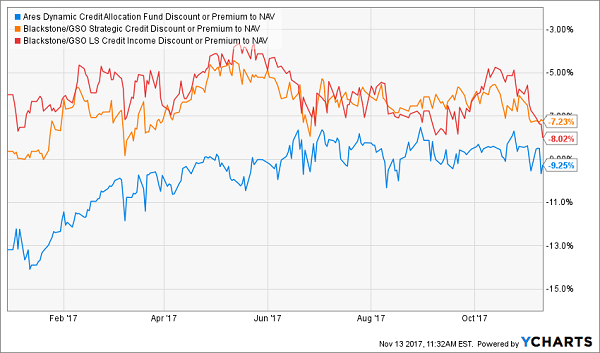 Fortunately, those discounts haven’t gotten much smaller in 2017—with the exception of ARDC, which has delivered a whopping 15.6% year-to-date total return—far more than my other two picks:

Nice Gains All Around 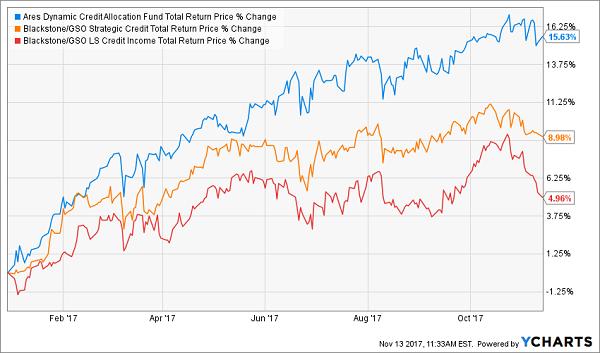 But all three funds are still attractive, for two reasons.

First, ARDC’s fundamental performance is all due to an essential factor in CEF performance: the management team. And Ares is a leader in the corporate-lending world. But Blackstone’s teams are really good too, and I expect the two Blackstone funds among my top three picks to keep up with ARDC in the future.

And if you buy all three, you’re getting about a 7.9% yield, on average, thanks to the massive payouts these funds give:

Is their recent run-up sustainable? Absolutely—because the Fed is destined to increase interest rates.

Let’s start by proving these funds’ returns are due to the Fed. Remember that Janet Yellen first started increasing rates in December 2015. Now look at this chart showing these funds’ performance both before and after that first rate hike: 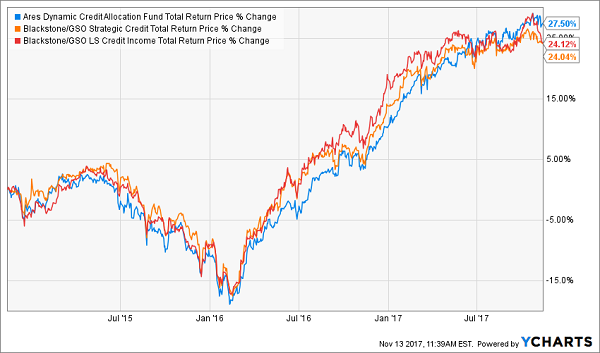 Yep, it all started with Yellen. 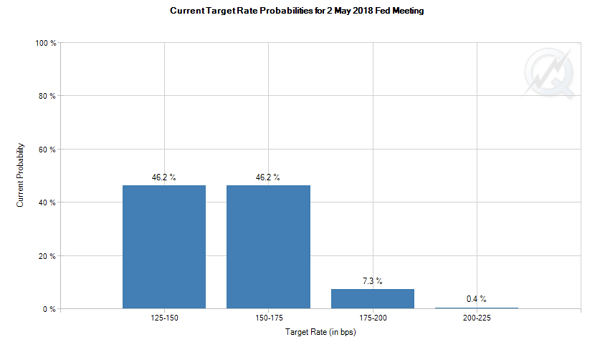 There are a lot of reasons why the market thinks this way. President Trump’s nominee for Fed chair is Jerome Powell, and he is on record supporting Yellen’s plans to raise rates in 2017 and beyond. Plus, wages are going up, unemployment is historically low, and inflation is getting higher. All of these mean the Fed has room to raise interest rates if it wants to.

And it wants to. Badly.

The Fed has hinted several times that it will raise rates even faster than the market believes. If it does, that will be good news for these senior loan funds, which means their destined gains in 2018 will be even bigger than the market is currently expecting.

Earlier this year, investors bought these funds hand over fist in anticipation of those rate hikes, but end-of-year seasonal weakness means those gains have paused a bit. That makes now a great time to buy them to profit from the Fed.

Don’t fear the Fed—and don’t fight them either. Profit from them with these funds.

I just released a fully updated FREE Special Report on my top 4 CEFs for 2018. Like the 3 senior secured loan funds above, the 4 buys in this urgent investment bulletin are off the market’s radar, so they’re trading at ridiculous discounts to NAV now.

And like the 3 picks above, they’ll become “safe havens” for income-starved investors as rates head higher.

Because even though the herd thinks higher rates will hurt CEFs by pushing up their borrowing costs, they’ve completely missed the other side of the equation: that higher rates signal a stronger economy—and that gives smartly run CEFs lots of terrific investment opportunities!

Of the 10 largest CEFs by assets under management (AUM) today, 6 were around then—and all posted double-digit total returns during that two-year span. What’s more, their average return of 17.4% bested the S&P 500’s 17.0%.

The kicker? They did it while paying much higher dividends than the typical miser of the S&P 500 dribbles out—so a big chunk of that 17.4% gain was in CASH.

History is already starting to repeat with my top 4 CEF picks, but the market is still asleep at the switch, which is why all 4 still trade at ridiculous discounts to NAV.

But our buy window won’t stay open long. I’ve got these 4 funds pegged for 20%+ price upside in the next 12 months as investors come to their senses. And that’s on top of their 7.4% dividends!

The full story—including these 4 funds’ names, tickers, buy-under prices and more—is in your FREE Special Report, which is waiting for you now. Don’t miss out. Click here to get your complimentary copy and start profiting today!