5 “Hidden” Dividend Stocks With Safe Yields Up to 9.3%

Whenever a pundit says they’re going to show you some high-yield dividend picks, we all know what’s coming. Telecoms like Verizon (VZ) and AT&T (T). Maybe a utility or two, like Southern Company (SO). Sure, they’re big, they’re safe … but even when they’re down, they’re still wildly crowded trades.

So let’s explore five dividend stocks with bulletproof yields up to 9.3%. Their payouts are high because their stock prices are low – thanks to these firms’ undercover status.

I love “hidden” dividends so much that I’ve dedicated one of my premium services – Hidden Yields – to them. That’s because there’s far more value to be wrung out of lesser-known gems thanks to their lack of analyst cheerlea … ahem, coverage, and relatively small media interest.

However, it’s important to note that many so-called “hidden” dividend stocks can be on the smaller end of the market capitalization spectrum. So even if they’re reliable, stable businesses that just happen to be more niche than, say, providing telecommunications services across the entire U.S., you and I both know there’s a little more risk. Which is why, across all five of today’s picks, I’ve drawn a hard line on their payout ratios.

Remember, a payout ratio is simply the percentage of something – whether it’s earnings, cash flow or even AFFO – that a company pays out as dividends. It speaks to the company’s ability to afford and continue paying a dividend.

Many high-yield dividend stocks stretch too far to make their generous payouts, dishing out 100% or more of earnings as dividends, to the point where they draw from their cash piles or even raise debt to continue making payments. Not good.

Here are five hidden dividend gems that pay dividends up to 9.3% and boast safe payout ratios.

I want to start out with an update of a “Hidden” dividend pick from a few months ago – KAR Auction Services (KAR), the enormous car auction operation that employs more than 17,000 employees across North America and the U.K.

Since my April mention, KAR has climbed 13%, spurred largely by a second-quarter earnings report in August that included profits of 65 cents per share, well ahead of analysts’ expectations for 58 cents. CEO James P. Hallett said its Insurance Auto Auctions division was a “grand slam,” with the division growing adjusted EBITDA 27% year-over-year.

Better still, Wall Street expects high-single-digit top-line growth for the next couple of years, as demand for the company’s services remains robust.

Again, KAR Auction Services doesn’t have the highest of yields, at just 3%, but it has been grown the payout by nearly 70% over the past five years. A manageable payout ratio of 77% indicates that distribution is secure, too.

When you think of high-yield or “junk” bond funds, you tend to think of the “big two” – the iShares iBoxx $ High Yield Corporate Bond ETF (HYG), and the SPDR Bloomberg Barclays High Yield Bond ETF (JNK).

But the VanEck Vectors Fallen Angel High Yield Bond ETF (ANGL) has a couple of advantages that make it worth consideration.

For one, credit quality. The term “fallen angel” refers to the fact that these bonds were initially issued as investment-grade, but have since “fallen” to junk status. While that sounds highly risky, in reality, ANGL’s portfolio is safer on the whole. More than three-quarters of this ETF’s holdings are rated BB – the highest classification of junk – versus less than half for HYG and JNK.

Still, since ANGL’s inception, this has been a winning formula that has seen it trounce its better-known competitors.

ANGL’s Returns Have Been Downright Heavenly 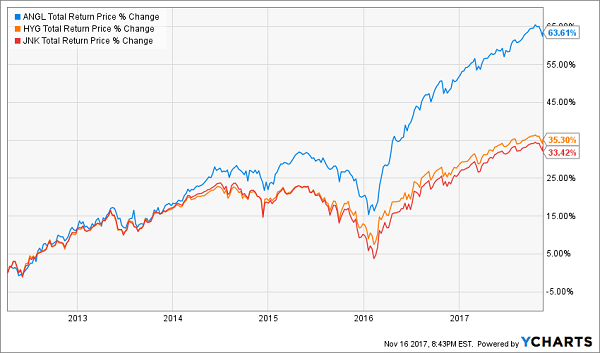 Many investors likely haven’t heard of Park Hotels & Resorts (PK) because it hasn’t been around for very long. Hilton Worldwide (HLT) spun off the real estate investment trust (REIT) – as well as Grand Vacations (HGV) – at the beginning of this year.

Park immediately started out life as one of the largest lodging-centric REITs on the market, boasting 67 hotels and resorts spanning 35,000 rooms. Better still is its target audience: the rich. Per Park Hotels:

This is a play on one of my favorite trends: The “experience economy,” which is seeing an increasing number of Americans eschewing “stuff” for getting out into the world and actually doing things. But naturally, there’s much more money to be gained when combining this trend with the country’s upper crust. And that’s what Park does.

Park Hotels & Resorts also doles out a solid 6% in yield that’s well-covered by its operations. So far through three quarters, PK’s $1.29 in dividend payments represent just 60% of the company’s adjusted funds from operations – an important measure of a REIT’s ability to generate cash.

I know I poked fun at the tired old cliché of utility companies in articles about high-yield dividend stocks, but this isn’t exactly your dad’s utility.

Pattern Energy Group (PEGI) is a so-called “yieldco” that boasts 20 renewable-energy power facilities across the U.S. Canada and Chile. All told, PEGI’s facilities boast owned interest of 2,736 megawatts, which to put it into perspective, mainstay “ute” Southern Company (SO) is capable of generating 46,000 megawatts.

Yieldcos are essentially companies created to hold established projects that generate reliable cash flow, and often are tethered to renewable-energy projects. And that’s exactly what Pattern does. The company currently has agreements in place to sell 89% of their generated energy, with those agreements sporting remaining life of about 14 years on average.

While wind energy sounds speculative in nature, PEGI has been fairly dependable, growing revenues every year since its 2013 initial public offering, and lifting its payout slightly every quarter since 2014. The company does have an up-and-down history of performance, but so far this year it’s at least matching the red-hot market – and that doesn’t include its fat dividends. 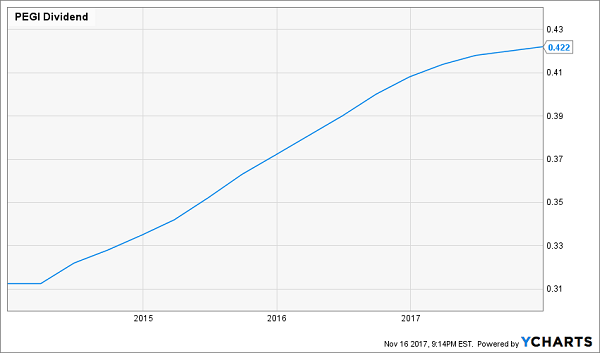 You’ve probably not heard of the Pimco Corporate & Income Opportunity Fund (PTY) because it’s a closed-end fund, and CEFs – despite their many virtues – are the black sheep of Wall Street’s fund world.

In short, a closed-end fund is like an exchange-traded fund in that it too trades on an exchange, but it has a limited number of units, and thus tends to trade very tightly around its net asset value, meaning at times funds can trade at discounts or premiums to their collective holdings. They’re typically actively managed, which means high fees, which is an immediate turnoff in today’s index-ETF-crazed market – but because they can use leverage to juice dividends and returns, good CEF management can more than make up for their higher costs.

Pimco’s PTY is a bond fund that invests in a wide variety of debt, from mortgage-linked bonds to high-yield credit to even emerging-market and municipal bonds. It features a nice maturity spread that’s mostly concentrated on the short-term –bonds of 1-3 years in maturity are the biggest piece of the pie, at 31% — and you even get international diversification, with about 20% of the fund split among the UK, Brazil, Russia and Luxembourg.

Additional leverage of more than 40% helps power a yield well north of 9%. That’s the fuel behind a five-year return that is roughly triple that of standard high-yield funds and more than seven times the broad bond benchmark!

The High-Yield Retirement Portfolio You NEVER Have to Touch!

I know blue-chip stocks sound safe, and sure, you’ll never lose your money in them. But when you depend on well-known blue chips to fund your retirement, you’re playing with fire.

Do the math. Most “recommended” blue chips yield 3%, maybe 4% if you’re lucky. That means even if you’ve built a nest egg of half a million dollars, you’re only generating $20,000 in annual income from dividends – at the high end!

Does that sound like the kind of retirement you’ve been working your tail off to reach?

Of course not! You need double that kind of yield, which is exactly what I’ve targeted with my 8% “No Withdrawal” retirement portfolio.

This all-star portfolio features the very best of several high-income assets, from preferred stocks to REITs to closed-end funds and more, that yield 6% on the low end, and double digits on the high end, for a total portfolio yield of about 8%.

And that’s not even the best part.

In addition to the high, stable yields, these picks are also positioned to grow their yields while boasting the potential for significant capital gains. That means you can not only live off the income these stocks produce, but you can grow your nest egg while you collect dividend checks!

These “ultimate dividend stocks” weren’t easy to find. It took months of research, and a lot of dead ends while weeding out numerous yield traps that looked great on the surface, I’ve compiled a “No Withdrawal” portfolio of stocks that offer …

You deserve more than a retirement spent scraping by on meager blue-chip returns and your Social Security checks. You deserve big, regular dividend checks that will let you see the world and live in comfort for the rest of your post-career life.

Let me show you the path to a no-worry retirement. Click here and I’ll provide you with THREE special reports that show you the path to building a “No Withdrawal” portfolio. You’ll get the names, tickers, buy prices and full analysis of their wealth-building potential – and it’s absolutely FREE!