How to Trade 5%+ Dividends for 75% Yearly Gains

Earlier this year, we added Synovus (SNV) to our Contrarian Income Report portfolio. We’ve enjoyed 36% total returns—including a couple of fat dividends—in the six months since. On a yearly basis, these gains annualize to 75%.

“Can we do this every time?” subscribers have asked?

That’s asking a bit much, but it doesn’t hurt to ask. (My young daughters know this well, because they are not shy about asking to eat ice cream at every meal!)

After all, if we reach for 75% yearly gains and have to “settle” for 17.5% profits, we’ll take that. It’s really about the process and stacking the probabilities in our favor on each given dividend purchase.

So, let’s walk through the six factors that we had in our favor with the well-run regional bank.

Synovus’s CEO Kessel Stelling was no stranger to a financial crisis when Covid hit banks this year. He was a regional manager when the firm needed a $968 million TARP (Troubled Asset Relief Program) loan from Uncle Sam to stay in business after the credit and housing debacle in 2008.

Back then, the bank laid off employees, closed branches and shook up its executive team. Stelling was promoted several ranks to the top spot to save the day.

He had the bank profitable again by 2011, repaid its TARP loan by 2013, and kicked off an amazing five-year run of 230% cumulative dividend increases. A few years later, Synovus was named one of the best banks in America.

As scary as the March 2020 lockdowns seemed at the time, Synovus had “been there, done that” and was an excellent candidate to emerge into 2021 and beyond as a leading bank once again.

Going into the Covid mess, Synovus’s impressive business momentum drove dividend growth, and last year’s 2.2x book value multiple reflects the enthusiasm that investors had about the company. But in just a few manic months that’s been replaced with despair, with shares now trading hands at just 67% of book value: 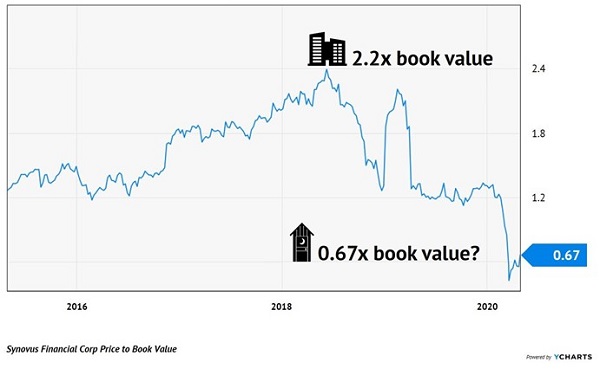 Buying a bank for less than book is as close to “free money” as it gets on Wall Street. Book value is the sum of the firm’s assets, less its liabilities, representing the price the company would fetch were it auctioned off this afternoon.

With Synovus, we not only received free money (one-third of book value, since we only paid 67%), but we also “banked” the business for free.

When we’re able to buy stocks for this cheap, we don’t even need “good news” to send the share price higher. The mere lack of disastrous news is enough to get shares rolling!

Step 3: Make Sure the Dividend is Secure

Chief Financial Officer Jamie Gregory recently explained that the company plans to continue paying its dividend, which still represents a 5.4% yield thanks to the firm’s depressed share price.

The bank was well-capitalized, with its CET1 (tier one capital ratio) clocking in at 9%, which is the internal target set by Synovus’s management and double what the regulators require (talk about secure!). Plus, SNV’s payout ratio is just 36% (the percentage of profits paid as dividends). Generally, I look for a bank to pay 60% or less, so Synovus has plenty of cushion here.

So, with Synovus, we established that we liked its:

But “cheap” isn’t always helpful. There are many bargain basement stocks that stay cheap for months and even years on end. If you know any value-focused investors, you have probably seen them shaking their heads and wringing their hands at dead-money positions.

They cry, sometimes for a long time: “This stock is so cheap—yet it doesn’t go higher!”

Rather than blame Mr. and Ms. Market, we contrarian traders do something much easier. We wait.

We didn’t catch Synovus exactly at its lows, but we did just fine by simply waiting for its uptrend to take hold. We sat back, watched shares get up off the mat, and made our purchase when the initial dust was clear yet shares were still plenty cheap.

We also considered the outlook for the broader market. It helps to know where the market is likely to go in the coming months, because a rising tide does lift all boats, but the possibility of a falling tide may be a cue to stay on the sidelines.

In this case, stocks-at-large looked poised to head higher (they did). Synovus itself looked poised to outperform the broader market thanks to some signs of “relative strength” that we picked up on early. This is a fancy way of saying that Synovus outperformed the market off of its March lows into April, and it has continued to beat the market since.

Revisiting steps one through three, the stock was like a “coiled spring.” Once it began to uncoil and confirm our bullish thesis, we bought.

Here’s the easy part—since we made our purchase, we’ve sat on our hands, collected a couple of dividend payments and let this winner run. There was no reason for us to sell SNV. Check out this pattern of higher highs and higher lows in a beautifully bullish chart! 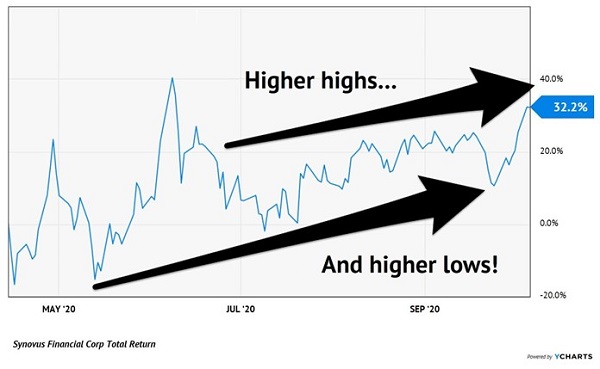 Since Synovus is a longer-term CIR holding, we are content to give the stock a lot of leash. As long as the bank’s loan portfolio appears stable, its dividend looks secure and its stock remains in a broader uptrend, we’ll hold—ideally for several years.

If we had made this purchase as a trade instead, which I define as a multi-month timeframe versus a multi-year timeframe, then we would be able to trade in and out of the position.

This is a strategy we have used with success in our Dividend Swing Trader service. For example, we played the dine-at-home trend by purchasing 6%+ payer B&G Foods (BGS), a firm that dominates the frozen food section of your local grocery store. With restaurant dining dicey, and many Americans sick of cooking meals from scratch, BGS has continued to benefit:

A Multi-Month Dividend Trade for +21% 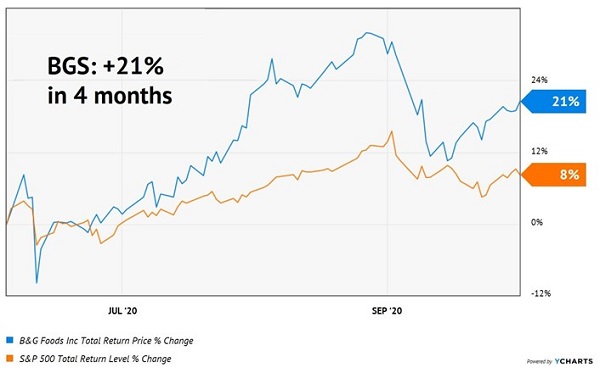 BGS has delivered similar annual gains to SNV, but we will likely book profits on the “freezer magnate” sooner. Synovus has a banking business that will benefit from any rise in rates, whereas frozen food sales probably won’t be as high this time next year. So, we ride the trend on BGS, collect its generous dividend, and keep eyes peeled for an opportune time to book profits.

Want to learn how to identify more double-digit dividend gains like Synovus?

Keep an eye out for an upcoming “dividend trading” webcast on this very topic. We’ll explore these five steps to buying dividend stocks for 20%+ yearly gains. My publisher will be sending an email invitation to you later this week—please keep an eye out for it.