How We’ll “Squeeze” the GameStop Drama for Safe 6.4%+ Dividends

Over the last few days, my inbox has been filling up with questions from readers about how this GameStop (GME) drama will affect their dividends, their pensions and even their retirement.

Let me say off the top that if you’re invested in top-quality stocks and funds for the long haul, you have nothing to worry about. In fact, this entertaining episode in financial history has created a nice opportunity for us to add to our positions in high-yielding closed-end funds (CEFs).

We’ll dive into that in today’s column, along with the most common questions I’m getting about this unique time in financial history. Let’s get started.

GameStop Question No. 1: Is the GME Short Squeeze a Bubble?

The broadest question I get is whether what’s happening now is a sign the stock market as a whole is ripe for a crash. Obviously, when a stock soars 7,000%+ in a year, it’s rational to think the market could be in bubble territory. 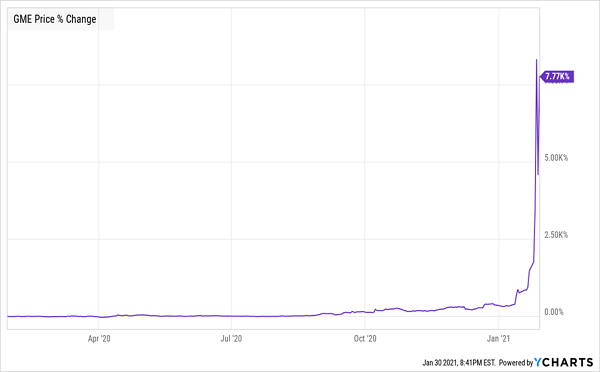 But even if GameStop and similar so-called “meme stocks” like BlackBerry (BB) and AMC Entertainment Holdings (AMC) are overheating, that doesn’t mean the broader market is. In fact, last week gave us a telling sign that the markets are not in a bubble: all the main indexes—the S&P 500, NASDAQ and Dow Jones Industrial Average—pulled back as the market pros panicked, overcome by bubble worries brought on by the GameStop frenzy. 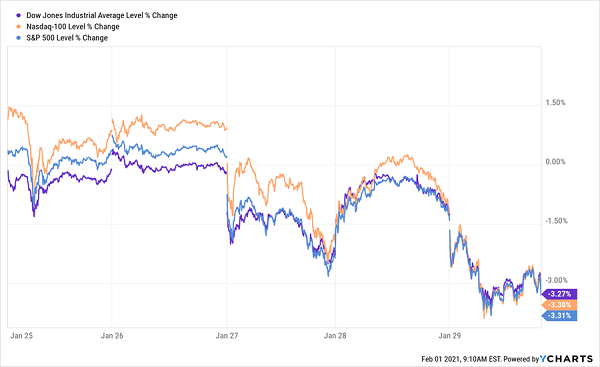 Funny thing is, this shows that there is not a bubble in the market, even if there is one in GameStop and its ilk. The market’s selloff last week, during GameStop’s surge, shows that a healthy amount of caution and skepticism remains—sentiments that don’t exist during a bubble. In fact, this dip has given us a decent buying opportunity.

As members of my CEF Insider service know, a high-yielding CEF is a better bet. Consider, for example, the Nuveen S&P 500 Dynamic Overwrite Fund (SPXX), which holds the same stocks as SPY—blue chips like Apple (AAPL), Microsoft (MSFT), Amazon.com (AMZN) and Visa (V)—but with a couple key twists that make it nicely suited for today’s uncertain market.

The first one is that it gives you much more of your return in the form of dividend cash: as I write, SPY yields 1.5%. SPXX pays more than four times that: a 6.4% yield.

The second “twist” is that SPXX sells call options (contracts that give the fund the option to sell its stocks in the future at a fixed price, in exchange for cash today). That might sound risky, but it’s just the opposite: it’s a smooth strategy that actually profits from volatility, because SPXX gets higher prices for its calls when markets get choppy. And right now, volatility is up due to the GameStop drama.

In addition, SPXX trades at a 6.7% discount to net asset value (NAV, or the value of its underlying portfolio). That’s a much better deal than we could get before the pandemic, when SPXX traded at par.

SPXX’s Sale Is Still On 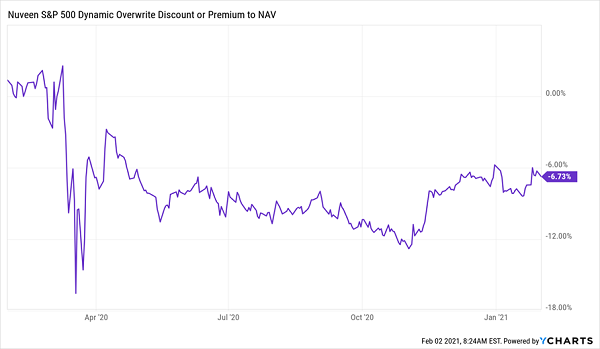 This is a common question I get from readers who don’t subscribe to my CEF Insider service.

If you haven’t invested in these “meme stocks” yourself, the answer is no. The mutual funds and ETFs most commonly held in these retirement accounts have little to no exposure to GameStop, BlackBerry, AMC or other targets of those posting on the WallStreetBets message board. And there’s little likelihood of contagion from those stocks hitting the biggest mutual funds and ETFs.

However, this is a great reminder that we should all take a close look at what the funds in our retirement accounts are holding from time to time. If you’re stuck in a limited number of mutual funds offered only through your employer, it’s time to look for alternative options, like SPXX and other CEFs paying even more (the typical CEF yields 7.3%, on average). We’ll swing back around to CEFs in just a second.

GameStop Question No 3: Will This Hurt My Pension?

The WallStreetBets crowd’s attack on hedge funds’ short positions has led to questions of whether pensions will be hurt, since some pension funds invest some of their assets in hedge funds.

In reality, there’s zero chance of pension funds getting significantly damaged from hedge funds going out of business (which is both WallStreetBets’s goal and an unlikely outcome of this chapter in financial history).

This is because pensions have around 9% of their assets in hedge funds, on average. In other words, if every hedge fund on earth went to zero, the pensions would be down 9% in aggregate, according to eVestment data. That’s the mathematically worst-case (and let’s be honest, impossible) scenario.

In reality, only some hedge funds have shorted GameStop. And bear in mind, too, that some hedge funds have likely started tracking WallStreetBets’s most hyped stocks and betting on those names. So not only is a 9% loss virtually impossible, but a smaller loss is unlikely, too. And the longer this feud goes on, the likelier it is that pension funds could actually go up because of the phenomenon.

GameStop Question No. 4: What Does This Mean for Closed-End Funds?

Since my focus is on CEFs, I get a lot of questions about whether CEFs will be hurt by this drama. The short answer is no, they will not.

CEFs do not invest in hedge funds. Rather, it’s the other way around, so any hedge-fund liquidations will have no direct effect on CEFs at all.

One thing to note, however, is that there are two CEFs that invest like hedge funds: the First Trust High Income Long/Short Fund (FSD) and the Calamos Long/Short Equity & Dynamic Income Trust (CPZ). Neither was short BlackBerry, GameStop or AMC as of their last filing (which, it must be admitted, was a few months ago).

Nonetheless, the GameStop saga does point to the possibility that short selling is a bad idea, so FSD and CPZ should be avoided right now—especially in light of the fact that the CEF space is filled with funds with higher, safer dividends, more diversification and much better strategies and track records.

Your Cure for Short-Squeeze Trauma: 7.5%+ Yielders That Profit 99% of the Time

My CEF Insider members and I stay well clear of risky strategies like short-selling. I just don’t see any reason to do such things when you can put your money in CEFs that pay you a safe 7.5%, year in and year out, in cash dividends.

That’s right around the market’s long-term return—and you’re getting it in dividends alone!

I don’t know of any other investment that can offer that and still boast the level of safety that CEFs do. In fact, my latest research confirms that when you zero in on the oldest, most established CEFs out there, you can slash your portfolio’s risk dramatically.

Here’s what the facts tell us: of the 330 CEFs out there that are a decade old or older, only 14 have lost money in the last 10 years.

That’s amazing enough on its own, but there’s more: of the 14 CEFs that did lose money, 11 were in the energy sector. Dump those 11 laggards and CEFs’ win rate jumps to an amazing 99%!

That’s a nice segue to the 5 secret CEF picks I’m making available to the public today. These ironclad dividend payers yield an outsized 7.5%, on average, and they come from across the economy, giving you critical diversification that slashes your risk even more.

The best part? These 5 funds are so cheap now, I’m calling for 20%+ price upside in the next 12 months. And that’s in addition to the 7.5% CASH dividend you’ll collect!

Don’t miss this unique opportunity for double-digit gains and life-changing dividends. Get full details on all 5 of these must-buy income plays—names, tickers and everything else you need to know—right here.