Wall Street Hates These 3 Dividend Payers (But Should You?)

The markets sure turned against “the little guy” in a hurry.

We chatted about the massive run-up in GameStop (GME) on Wednesday. I had a buddy of mine, who just happens to be a loyal Reddit reader, catch “short squeeze” fever.

If these guys and gals had tried to go anywhere, they’d have been stopped by the temperature check. That’s how hot they were running as Wall Street big shots were being forced to “buy back” their previously shorted GME shares at astronomical prices.

But short squeezes are often short lived, and GME has already plummeted two-thirds below its peak. Why the carnage? Well, the stock was heavily shorted for a reason. Its business model (selling CDs in malls!) was fundamentally flawed.

As contrarian-minded investors, we shouldn’t mind short positions in the stocks that we buy. Our challenge is that we must make sure that the short sellers are “missing something”—that they’re actually wrong about their wager.

Let’s consider the case of W.P. Carey (WPC), an industrial landlord I recommended in the January 2019 issue of my Contrarian Income Report research service, and sold a year later for a market-thrashing 27.7% total return.

Thank the short sellers, which ignored the company’s generous 6%-plus dividend, 21 straight years of payout hikes and long, locked-in leases.

Shorts Give Up, We Buy In 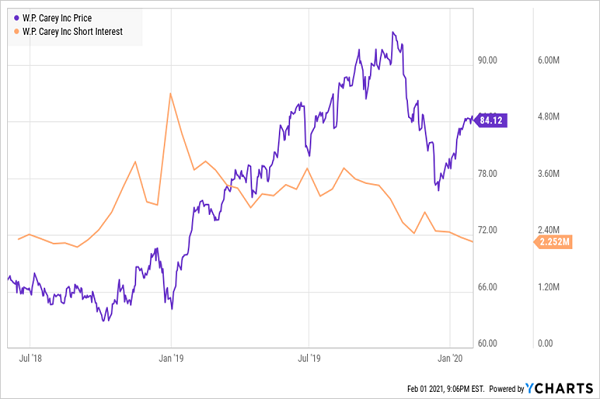 Rising short interest held WPC’s price back through late 2018, but they started to throw in the towel, and that’s when we pounced. Then we simply collected our gains after the short covering and rising dividend drove the stock price higher.

But short squeezes are two-faced, and you really don’t want to see their ugly side.

Timing is everything in short squeezes. Show up early enough, and it’s game on. But show up too late, and you’re left holding the bag.

No one likes to talk about it, but you see it in almost every short squeeze. Even if you find a diamond in the rough, a squeeze will send it not just sharply up, but also sharply back down—perhaps higher than where it started, but if you’re hellbent on holding, you still have to stomach some nasty volatility.

You see it throughout history. Consider the famous Volkswagen (VWAGY) squeeze of 2008, which sent shares more than 350% higher—in the midst of the financial crisis, no less. But it also went just four days before peaking and hitting a 50% retracement of the move, and it had lost all of its gains in less than three months. 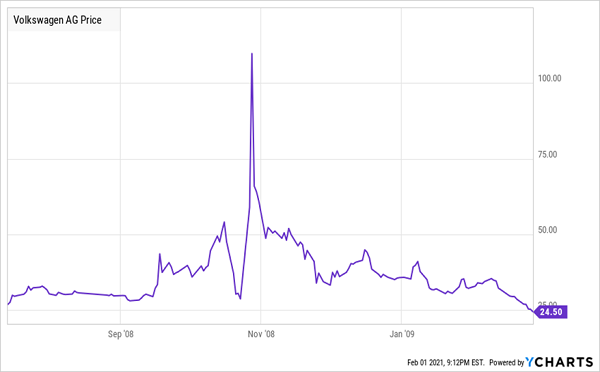 Or look more recently at Hertz (HTZGQ), which shot nearly 900% higher in early June 2020, less than a month after it had filed for bankruptcy protection.

50% Off Its Peak in Just Three Days 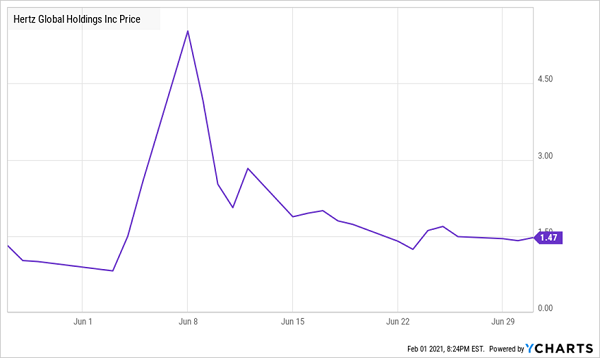 In both cases, investors who waited too long to jump in were scorched with devastating losses that they’ll very likely never recoup again, certainly not for many, many years. 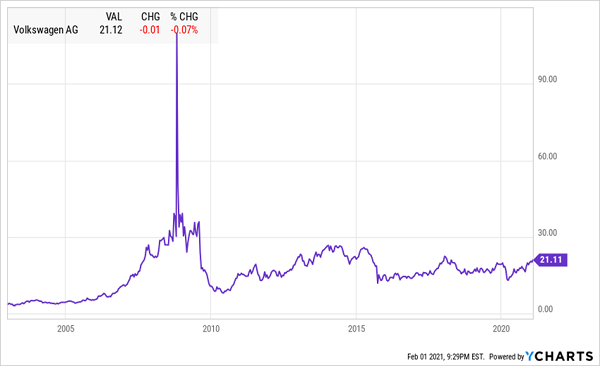 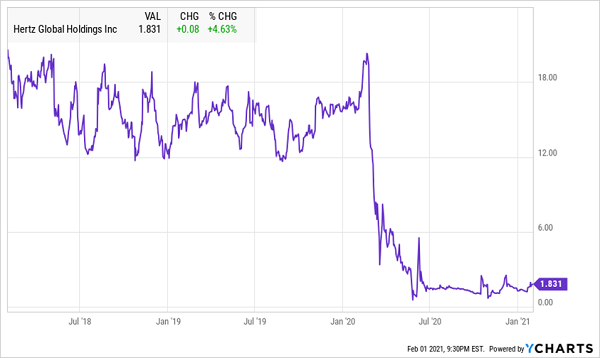 Another risk is that the cavalry just never arrives. You might throw your chips behind some highly shorted stock waiting for others to join you, but they never do, and the stock just slowly trickles down to zero. (Have enough sense to exit before then.)

GameStop might be the most dramatic example of a short squeeze turning ugly right now, but it’s not the only highly shorted stock that could make its investors feel some pain by the end.

Let’s look at a few high yielders you might want to leave alone, lest you get singed.

Lumen Technologies (LUMN, 8.5% yield), for instance, is already starting to see the bloom come off its short squeeze rose. The stock had run up by about 70% intraday Jan. 27 but dropped 30% from that peak in just four days.

Is This Trade Unwinding? 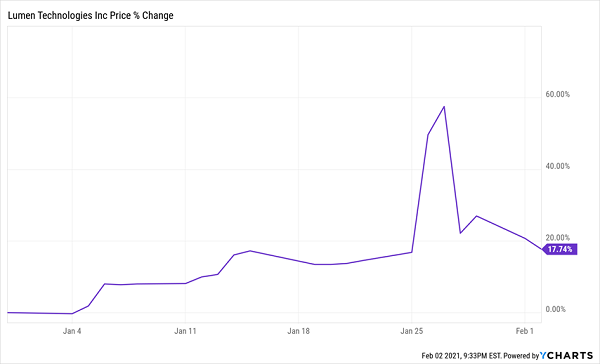 If Lumen isn’t a familiar name, you might remember it as CenturyLink. This cable and internet provider has cut its dividend twice in the past decade (2013 and 2019) amid constant declines in its legacy business. Like any short squeeze, it has a positive catalyst—a high yield and progress in its enterprise division certainly help. But even after its squeeze has started to cool, it’s already up 18% in a month during a year in which analysts expect profits to decline.

LUMN’s short interest wasn’t high to begin with either, at about 10% as of mid-January. It might not have much of that particular fuel left.

Tanger Factory Outlet Centers (SKT, 4.9%) is in a much different business but a similar situation. The shorts have piled into more than half of this real estate investment trust’s (REITs) float, about 53% at last check, but that trade looks to be unraveling, too.

A Little Too Much Enthusiasm for a Brick-and-Mortar Comeback 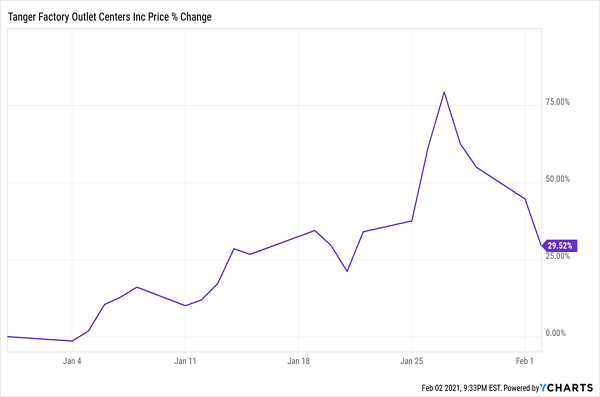 No one does outlet malls better than Tanger. But while its business fortunes will certainly improve once the U.S. gets COVID under control, no one knows when that will happen, and what will be left of Tanger’s tenants when it is. E-commerce was already in a long-term upswing when the pandemic began; COVID just cemented those gains and extended them some more.

You’re also not getting all that thick a dividend, either. SKT brought back the payout, but at roughly half the rate it was paying before it suspended dividends last spring.

SKT shares still are up 30% year-to-date, but they’re only 12% lower than where they were at the start of 2020. That’s little reward for taking a big risk that Tanger’s business recovers to where it was pre-pandemic—soon, or ever.

Invesco Mortgage Capital (IVR, 8.0% yield), which sports short interest that’s about 22% of its float, might be on the back half of a squeeze, too.

The Dip Isn’t as Deep, But It’s Still Early 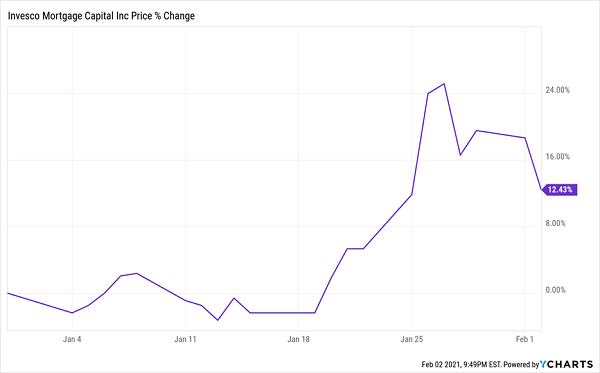 But credit where credit’s due: this mortgage REIT at least tried to take advantage of its situation by announcing on Feb. 1 a plan to offer 2 million shares to raise cash. Shareholders (especially newer ones) clearly didn’t enjoy knowing their holdings would be diluted.

This isn’t new. IVR (and plenty of other mREITs) rely on issuing shares to help pay their large dividends. But it doesn’t make this glorified interest-play, whose earnings have simply been crushed and was forced to cut its dividend as a result, look any more appealing.

A pattern you start to pick up with experience is that stock prices are attracted to their dividends, just like magnets. Sure, they may bounce higher, or lower, but as the years pass, the two always seem to find each other. That’s murder for dividend cutters, but rocket fuel for dividend growers.

Take Chemours (CC), which we added to our Contrarian Income Report portfolio in June. Yes, we loved the high short interest (above 10%), especially on a stock with such a fat yield (7.4%) at the time, and we loved the potentially explosive catalysts that could—and did!—make some of the short sellers question recent life decisions. 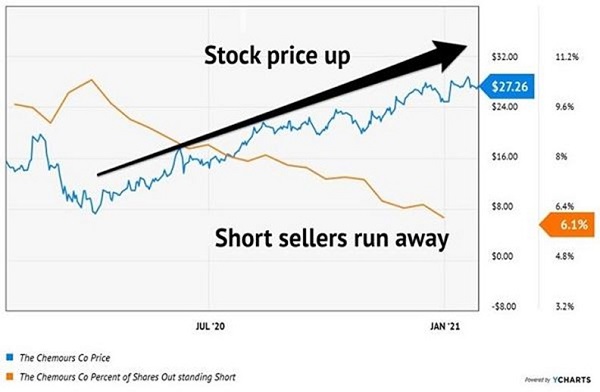 But we also loved the power of the “dividend magnet.”

What is this “magnet” I’m talking about? Just look at how closely stocks like Pfizer (PFE) track their dividends over time. It’s a virtuous cycle in which the factors spurring the stock’s growth also help drive dividend growth, and the dividend growth convinces investors to buy more stock! 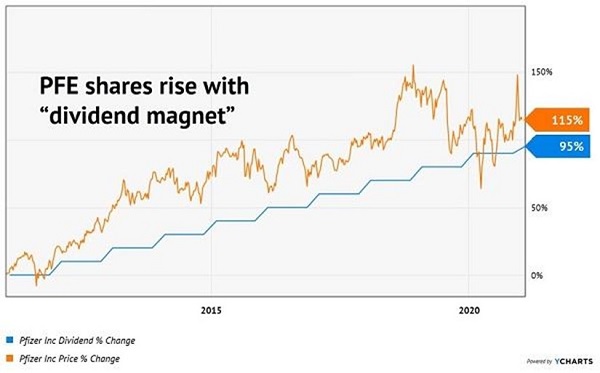 Sometimes, though, the price becomes really untethered from the dividend, and when it snaps back, you get a rapid, violent move in the other direction.

We saw an incredible “magnet” setup like this in CC, which seemed to be ignoring a mammoth dividend burst in recent years… 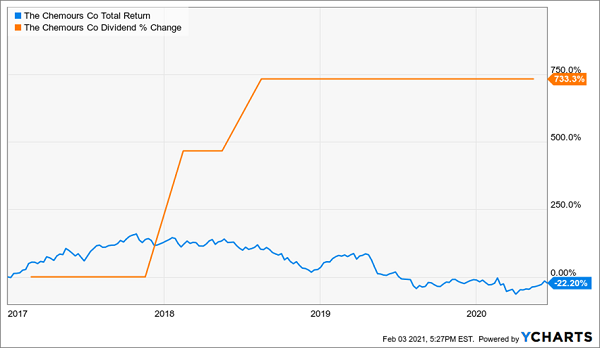 …and we’ve ridden that to a fat total return in the months since. 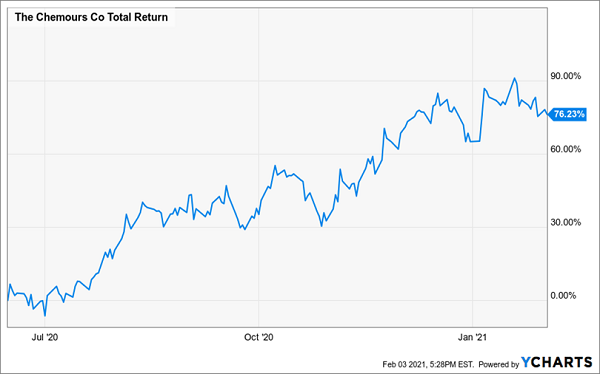 So what’s the next big “dividend magnet” to put on your radar?

I’ve recently wrapped up the research on my best dividend growth idea for 2021, and I’ve just delivered it to the subscribers of my Hidden Yields research service. It’s a brand-new stock that few income investors are watching, and like CC, it has some serious rally potential.

Hey. Actually, according to our records, we don’t have your subscription to Hidden Yields as current. Would you like to add it?