Invest Alongside These 2 Company Insiders for Yields up to 8.6%

The best way to learn about a company is directly from the executives that run the business on a day-to-day basis. However, there are thousands of actively traded stocks in the U.S. alone and CEOs rarely make the time to speak directly with anyone outside of their largest investors.

That’s why I keep an eye out for Form 4’s, which is the SEC filing insiders are required to submit within two business days of trading shares in their own company.

You don’t need to take my word for it, rather famed investor Peter Lynch is my inspiration to sift through a virtual stack of regulatory filings. Several years back, Lynch was quoted: “insiders might sell their shares for any number of reasons, but they buy them for only one: they think the price will rise.”

With that in mind, here are two dividend stocks that company executives have staked their own money behind in recent weeks.

Insider Pick No. 1: Keeping it Simple for Shareholders 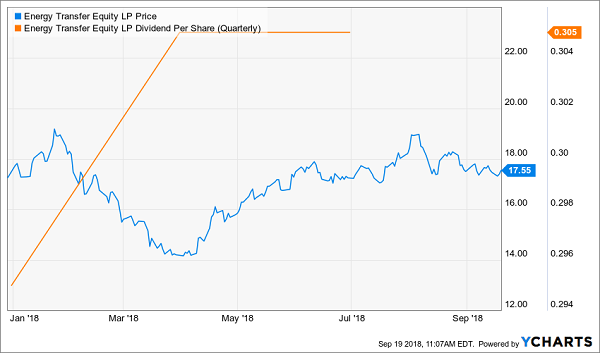 Energy Transfer Equity (ETE) is a pipeline partnership that is trying to simplify its structure, in order to increase shareholder value. The company currently controls the general partner covering a network of assets that transports 19 million BTUs of natural gas and 4 million barrels of oil daily.

Earlier this month, Richard Brannon, a member of the company’s board of directors, used his wallet to voice approval of Energy Transfer Equity’s strategy and spent more than $2 million to acquire 125,000 shares on the open market.

Management has increased the quarterly dividend twice in the past four quarters and currently pays out $1.22 a share annually (7% yield). The company can cover the current distribution 1.15x with internal cash flow, a metric it believes will increase to 1.6x to 1.9x after the consolidation.

Like most pipeline operators, Energy Transfer Equity’s business is primarily fee-based and is relatively insulated from volatility in underlying commodity prices. This suggests future dividend increases are possible, which can allow investors to grow their money faster through the power of compounding. 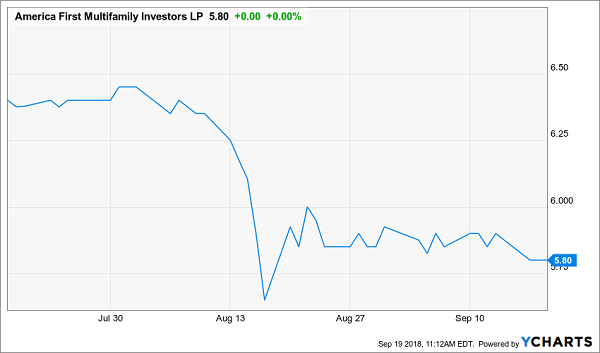 America First Multifamily (ATAX) is a limited partnership that invests in mortgage revenue bonds. The company has operated for 20 years ended the second quarter with $1 billion of investments, covering more than 80 properties and 11,000 units across 14 states.

Shares have struggled over the past two months, losing 9% and negating the benefit of America First’s 8.6% dividend yield. That said, America First’s chief executive, Chad Daffer recently stepped up and bought 20,000 shares at discounted levels.

It’s worth noting that the company generated just $0.09 a share of cash available for distribution last quarter, which is less than the dividend of $0.125. Management is in the process of selling a property with 144 units in Florida that did not close by the end of the second quarter, which would have helped America First cover the dividend.

In the meantime, management is focused on reducing borrowing costs by moving to lock in interest rates, before they move even higher. About 57% of the company’s debt is fixed-rate currently, up from just 32% three years ago.

While we like to see insider buying with a turnaround story, there’s a lot of risk involved with mergers and combating rising interest rates. It’s encouraging to see when management is directly invested in a company’s future success, but there’s no telling how long it could take to get back on the right track.

I’d Rather Invest Alongside These 3 Visionary REIT CEOs

That’s why we love when CEOs who always do the right thing are purchasing more shares for themselves. You see, it’s possible to generate steady income without taking on the turnaround risk and we can show you how!

Today, three of our favorite CEOs are increasing their personal stakes and buying as much stock as they can get their hands on!

All three businesses are recession-proof, and should continue to cruise no matter what’s in Trump’s next Tweet. These companies have captive, growing audiences – and they’ll be able to continue raising the rent without a problem.

And best of all, these stocks pay current yields up to 9%. They are cornerstones of our “no withdrawal” portfolio, which lets retirees and near-retirees generate enough income from dividends that they never have to sell a share of stock.

I’m sure you’ve considered this strategy. Maybe you’re dismayed that it’s impossible to execute with rates near historic lows. After all, with paltry dividends, there’s not enough income to live off.

That’s why a different approach – a contrarian one – is needed today. We must locate yields that are 7% or 8% or higher, and also make sure they’re secure. And what better way to do this than to follow CEOs buying their own out-of-favor, high yielding shares!

We’d love to share the names and tickers of these three insider-loved recession-proof REITs with you. In fact, Chief Investment Strategist Brett Owens has prepared a detailed report with our full analysis. Click here for instant access – and all the details on our “no withdrawal” strategy.