Energy prices have rallied furiously, but they likely have further to go. Oil and gas prices last peaked around 2014 and sunk slowly until the black goo hit negative prices in the spring of last year.

A six-year bear market takes more than 13 months to unwind. Which is why energy dividend stocks remain quite attractive.

Oil and gas stocks are 4% yielding on average, which is nearly a full percentage point more than we can get out of real estate investment trusts (REITs) at the moment. And as I’ll show you in a moment, we can squeeze yields of between 5.0% and 9.2% from “Texas tea” if we know just where to look.

Better yet, the sector represents some of the market’s best values.

Oil and energy stocks alike have been virtually flat over the past two months. The lion’s share of their gains came amid the first quarter’s unbridled optimism over stimulus, vaccines and Americans sprinting out of their homes (and into cars and planes).

Since then, investors have been lulled back to sleep thanks to COVID setbacks, inflation jitters and a stimulus hangover as Wall Street computes the odds of Washington’s next big spending plan making it through Congress.

We dividend fans don’t want to miss what comes next. We remain in the early stages of oil’s latest “crash ‘n’ rally” patterns. You can read more about that here (and learn about an inflation-protected 6.1% yielder to boot), but in short, the cycle looks like this: 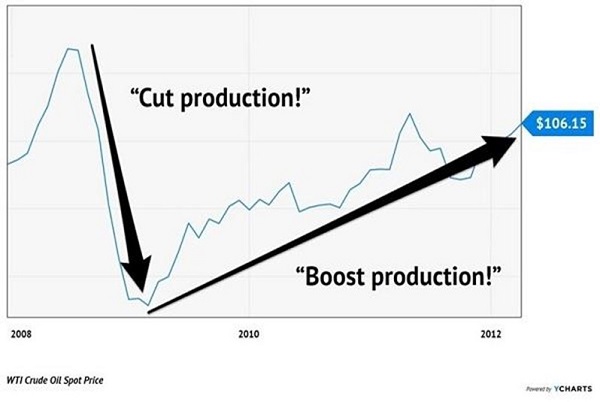 History is already rhyming. Which means we have at least three or four or five years to go in this energy rally.

This is a two-fold opportunity for income investors. We can collect the super-sized dividends from the still-recovering energy sector, all while locking in what’s setting up to be another two to three years of a supply-and-demand “catchup rally.”

Let’s take a look at five ways to play the space, yielding anywhere between 5.0% and 9.2% at current prices.

Chevron (CVX) is an integrated energy major that does it all: from extracting oil from the earth to providing refined gasoline at the pump, to everything in between.

Chevron’s sheer size and financial brawn have helped it weather a number of energy scares, including last year’s energy crash and oil’s brief flirtation with (deep!) negative prices. Yes, Chevron did have to cut back on spending—as did virtually every other energy name—but it survived with its dividend intact, and even pulled off a move every Contrarian Outlook reader can appreciate.

It took advantage of bargain-basement prices by snapping up independent energy exploration and production name Noble Energy in an all-stock deal that just recently closed. That move bolsters CVX’s shale operations, providing it with acreage in the DJ and Permian basins.

Chevron is easily one of the “safest” ways to play the energy space, for better and for worse. Its diversified operations (E&P, refining, retail and more) help insulate it from oil-price changes from purer-play firms, and its ample cash flow generation should keep it among the ranks of the Dividend Aristocrats.

The flip side? CVX does yield more than the already generous sector average, but it’s on the lower end of energy’s truly high-yield offerings. Moreover, if oil does have even more mountain to climb, that diversification—specifically in refining, where higher input costs weigh on profitability—means Chevron won’t get as much lift as, say, straightforward oil and gas producers.

CVX: The Fall Was Softer, But So Was the Bounce 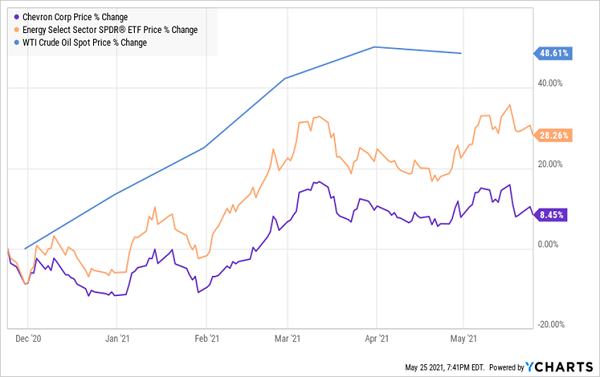 Valero Energy (VLO) is another play for more conservative hands. The San Antonio-based refiner is the world’s largest, boasting 15 refineries in the U.S., Canada and U.K.

It also has bulked up its green credentials in recent years; it’s the planet’s second-largest corn ethanol producer as well as its second-largest renewable diesel producer. And earlier this year, it announced plans to team up with BlackRock (BLK) and Navigator to develop a carbon-capture pipeline system spanning some 1,200 miles across five states in the Midwest.

Like Chevron, Valero didn’t lay a finger on its dividend during the COVID downturn because of an enviable balance sheet compared to the rest of the sector. But, like Chevron (in fact, moreso), the nature of Valero’s operations might not be perfectly suited to leverage future oil-price gains.

Remember: The metric to watch for refiners isn’t just Brent or West Texas Intermediate prices—it’s the “crack spread,” which is effectively a refiner’s margins, calculated as the difference between raw inputs like crude and what it can sell its refined products for.

The good news? VLO has nonetheless had a productive 2021, up 42% to edge out the broader sector. And at least in the short term, refiners like VLO could still heat up, because the sky’s the limit for demand. Last month, OPEC raised its 2021 oil demand forecast by 190,000 barrels per day, seeing full-year consumption around 96.5 million barrels per day this year. 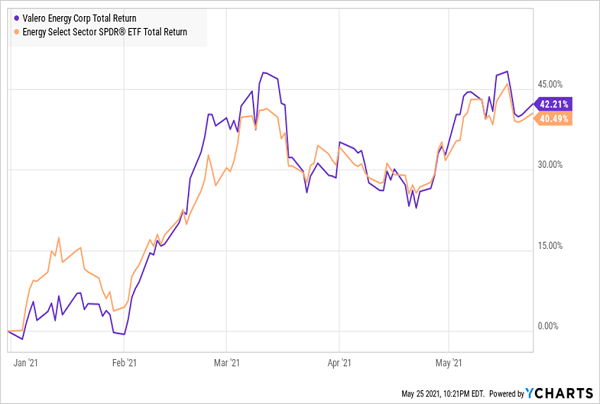 VLO’s valuation is scary at first blush; the stock’s trading at nearly 100 times this year’s projected earnings of 76 cents per share. That’s OK. Valero shares trade at a much more acceptable 14 times “more normal” earnings of $5.59 per share in 2022.

Midstream plays—historically thought of as master limited partnerships (MLPs), though an increasing number of pipeline companies have ditched that structure—have long been associated with high yields. The Alerian MLP ETF (AMLP), for instance, yields 7.4% at present.

Equitrans Midstream (ETRN), the nation’s third-largest natural gas producer that owns and/or operates some 2,850 miles of pipelines and gathering lines, isn’t too far off, at 7.1%.

And Antero Midstream (AM), which owns more than 370 miles of natural gas gathering pipelines, as well as compression stations, fractionation plants and even freshwater pipelines and storage, is well ahead of the curve at more than 9%.

Infrastructure plays such as these do move up and down with overall energy prices, but again, not as much as E&P companies. Instead, because they’re effectively “toll takers” that make money off of the commodities flowing through their systems, what matters most is high volumes, and thus, high demand.

However, Antero is just a month removed from announcing a 27% dividend cut and is fairly valued at best, while ETRN’s Mountain Valley Pipeline project, which it holds 47.8% ownership stake in, won’t enter service until 2022.

Nice yields, but upside will be a struggle from here, especially in the short term.

There’s no more high-risk, high-reward area of the energy sector than equipment and services stocks. These companies live and die by oil and natural gas prices—when prices spike, E&P firms need all the help they can get, but when they dip, these third-party providers quickly get the boot.

Over the past year through the start of May, WTI crude is up 114%. And over the past 52 weeks, services and equipment companies have nearly doubled, torching the other major energy subindustries. 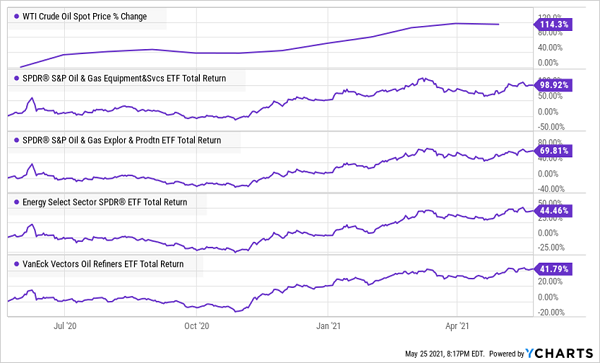 But the pain can be downright unbearable when oil hits the skids. Consider the past three years, in which oil still hasn’t fully recovered from its 2018-20 declines. Equipment and services have been downright lethargic.

That brings us to Archrock (AROC), which is an energy infrastructure play whose equipment compresses natural gas, which allows it to move throughout pipelines. It sells that equipment, and provides aftermarket compression services, to customers mostly in the Permian Basin, South Texas, Mid-Continent and Gulf Coast.

What’s attractive about Archrock is that its operations aren’t nearly as volatile as its industrymates, which makes sense given that its fortunes are tied to “toll taker” pipeline firms. Revenues were down in 2020—but by less than 10%. It suffered a net loss, but it’s expected to bounce well into the black this year. It had to stop growing its healthy dividend, but it didn’t cut it.

However, that steadiness cuts both ways. It dipped less than other services and equipment providers in the downturn. But its rebound has been mediocre in 2021 compared to many of its brethren, and it doesn’t stand to gain as much from natural-gas price gains as the companies that actually extract it.

Sky-High Dividends You Can Count on for DECADES

These “B” squad energy stocks aren’t lacking for income, but when it comes to securing your future, “B” isn’t going to cut it.

In fact, that’s ultimately the rub with a lot of super-high-yielders. There’s always a “but” after pointing out how great their payouts are.

This stock has a great dividend, but …

This fund yields in the double digits, but …

You had exciting plans for retirement, but …

Most uber-high yields come with a laundry list of asterisks, provisos and risks that can result in massive volatility, or stagnant prices, or even dividend cuts over time. So if you’re shooting for big income, you have to be perfect.

And I have just the right stocks for that job.

In fact, my “Perfect Income” portfolio could double and even triple the dividends most income investors are earning from their current portfolios. (And in some cases, readers could see a 4x jump in their regular checks!)

That alone is a massive upgrade to any set of retirement holdings. But more important is that my Perfect Income Portfolio delivers that level of cash while also …

Take control of your financial legacy today. Let me show you how to get 2x to 4x your current income with this simple, straightforward system. Click here to get a FREE copy of my Perfect Income Portfolio report, including tickers, dividend yields, full analyses of each pick … and a few other bonuses!