You may not know it, but you could have enough money saved to retire right now.

Today we’re going to look at how you can pull a nice $30,000-a-year income stream from your current hoard, even if you’ve saved just $250K. Best of all, you could generate this cash stream without selling a single stock from your portfolio. That could very well be enough for you to clock out, or at least scale back your day job.

Along the way, I’ll also show you how to dodge some of the worst yield traps in dividend-land.

Be Wary of High-Yield Blue Chips

To be honest, I don’t know why anyone would be surprised that this approach is possible. Because despite the big run the market’s been on (which has had the effect of driving dividend yields through the floor), there are still “plain vanilla” blue chips that can get you pretty close.

Of course, investing all of your nest egg in one stock is a recipe for disaster—especially a company like AT&T, whose 7% yield doesn’t come from dividend growth; it’s because its share price (the other half of our dividend yield equation) collapsed last March and has yet to get up. 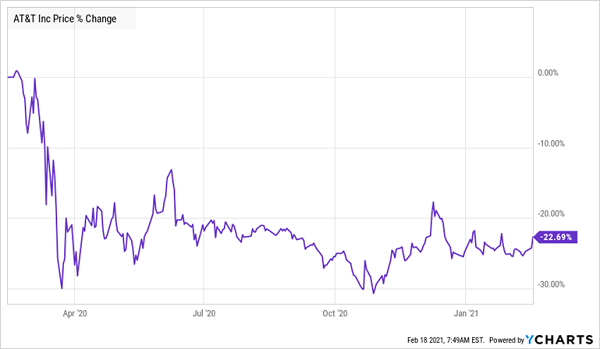 I don’t see its prospects getting any better, as its profits are held back by a movie business trying to survive in a world of shuttered cinemas, and a satellite-TV division that’s bleeding customers to streaming services like Netflix (NFLX).

So if we want to build a decent income stream on a reasonable nest egg, we have to go beyond the mainstream and look at my favorite high-income vehicle, closed-end funds (CEFs).

CEFs: Your Best Bet for a “No-Withdrawal” Retirement

CEFs are a unique type of fund known for one thing: high yields. As I write this, the yield on the typical CEF is around 7%—the same as you’d get with AT&T. And some CEFs yield way more, such as the Cornerstone Total Return Fund (CRF), the highest-paying CEF on the market, with a massive 14.4% yield.

But with CEFs, as with regular stocks, we have to be choosy and avoid the temptation to buy on yield alone. CRF is a classic example. At its current yield, it’d take just $208,333 invested to get our $30,000 income stream. 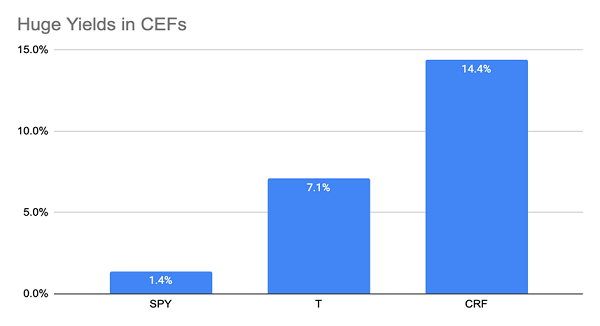 Trouble is, CRF’s yield is high for the opposite reason AT&T’s is: it cuts its dividend all the time! 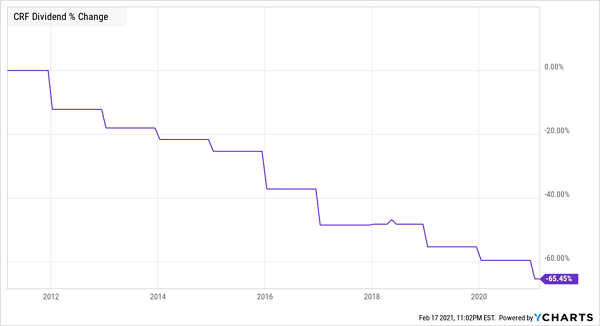 So if you wanted to use CRF to get $30,000 in passive income for, say, a year or so, it’d do the job, but you can’t rely on the fund’s payouts to hold steady for the long term, so this is definitely not a fund to count on in your golden years.

A Much More Stable Alternative for High, Steady Dividends

But don’t despair, because there are CEFs with big yields and payouts that hold steady over the long term, making it possible to get our $30,000 income stream on just $250,000 invested. To do that, you need to find a fund that yields 12% and doesn’t cut payouts. While that sounds impossible, such a fund does exist.

The Brookfield Real Assets Fund (RA) pays a 12.5% dividend yield today, and it has paid out its dividends consistently since its IPO five years ago.

The fund’s high yield and history of keeping its payout steady mean that if you put a quarter-million dollars in RA when it was launched, you’d still be getting the same $30,000 income stream you got back then.

Of course, this all sounds great, but there is one catch: while RA is a good pick for consistent high income, the tradeoff is that your investment won’t grow as quickly as the broader market.

Big Income—But You Will Sacrifice Some Gains 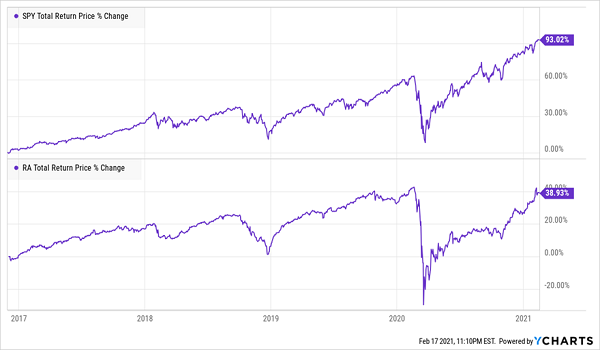 With just a 39% total return (including dividends) since its inception, RA has clearly underperformed the broader market’s 93% return. But we can still pick up CEFs whose yields crush anything you’d get from a blue-chip stock or an ETF, and these funds outperform the S&P 500, too. That’s the best of both worlds, offering a superior return and most of your gain in safe dividend cash!

My top 5 CEFs give you an 8% average dividend now (with one fund paying an amazing 9.1%!) and they differ from RA in one critical way: they’re poised for 20%+ price upside in the year ahead, according to my latest analysis.

In other words, you’re likely to crush the market’s total return on a price basis alone—not even including these funds’ 8% average dividends! In fact, when you add up the price gains and dividends I expect, you could easily be looking at a 28% total return by this time next year!

These 5 funds are perfect for your portfolio, giving you the high income you want now and setting you up for strong price appreciation in the months ahead. Everything you need to know is waiting for you right here, including the names, tickers, buy-under prices and complete dividend histories for each of these 5 powerhouse funds!