One Reason to Invest 100% in American Companies

These days, you might be tempted to buy shares of companies based in places like Europe, Japan or emerging markets.

On the surface there are good reasons to do so.

Europe, for example, is beaten down and still going full blast on quantitative easing, making it look like the continent’s economy has nowhere to go but up.

Japan’s QE program, meanwhile, involves direct purchases of stocks by the central bank: the Bank of Japan is expected to be the largest shareholder in the country’s biggest companies by the end of this year.

And, of course, emerging markets are where the biggest growth is, so why not buy into that, too?

On the surface, this is all sound logic. And a cursory look at asset returns in these regions makes a global bet even more attractive.

But the truth is, it’s all a mirage. Keeping your money in America is still the best way to get the most reliable, least volatile and strongest returns—and you can do it while protecting yourself from big market meltdowns, like we saw in 2008.

Let me show you what I mean, starting with a look at which indices produced the best and worst returns over the past decade:

America First—in More Ways Than One 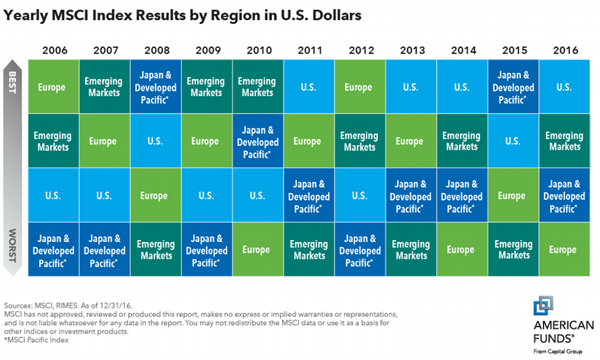 From the above, you can see that America is the top performer four times out of 11, beating even emerging markets (three times).

Emerging markets tied for the worst return four times out of 11, as did Japan and Asia, while America never came in last.

A closer look further demonstrates the relative safety of buying only US stocks. Here’s the historical return of the major global indices, as compiled by J.P. Morgan Chase & Co. (JPM):

US Avoids the Bottom 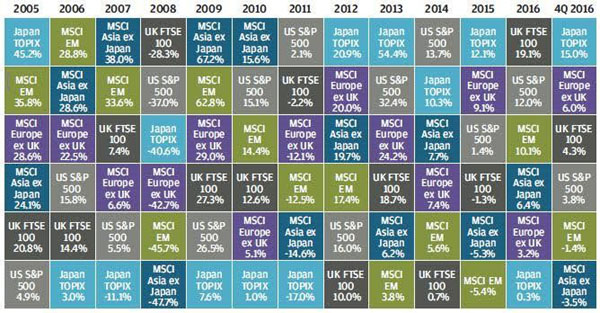 This all goes to show that keeping your money in US stocks likely means you will outperform almost all the time and have smaller losses in bad years.

Now let’s look at the performance of fixed income since 2010.

When it comes to high yield corporate bonds, sometimes referred to as “junk bonds,” we see the same story: the US was only the worst performer once (2014), when it returned 2.5%. In years of weak performance (2015), it wasn’t the biggest loser, and it only had a negative return once, while the presumably safer US Treasuries fell in value twice in the same time period. And that one year of slight losses is amply offset by the fact that US high yield was the top performer 29% of the time and second best just as frequently. And with an average return of 8.3%, high yield is a strong performer overall.

If we combine high yield with US stock holdings, we get a 10.8% average return and only one year of minuscule losses (2015): 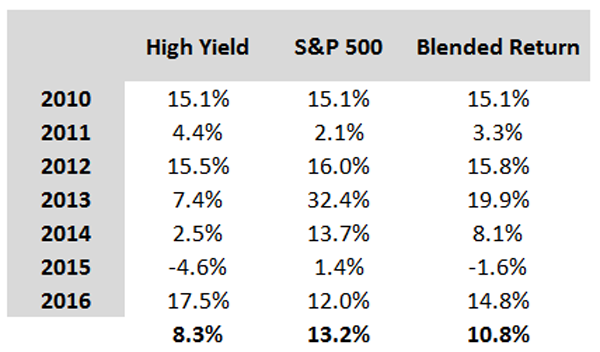 With this in mind, you might wonder why you should bother with high yield at all, since the S&P 500 outperformed it in almost every year and had a much higher return on average. 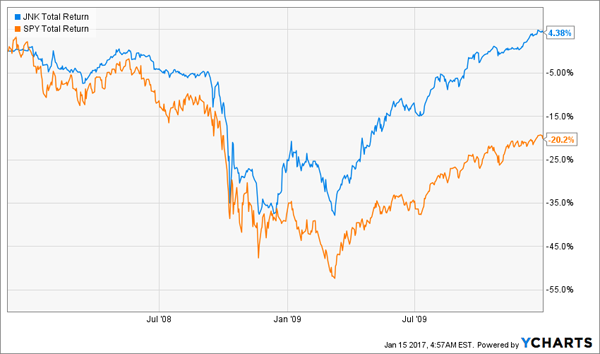 Despite the misnomer, junk bonds outperformed the S&P 500 during the dark days of the global financial crisis. Thus, holding the SPDR Barclays High Yield Bond ETF (JNK) with the SPDR S&P 500 ETF (SPY) would have provided a stronger total return and protected you from losses you would have suffered just by purchasing the index.

Let’s take a look at the return on the Vanguard Total World Stock ETF (VT) since the financial crisis, alongside SPY and JNK: 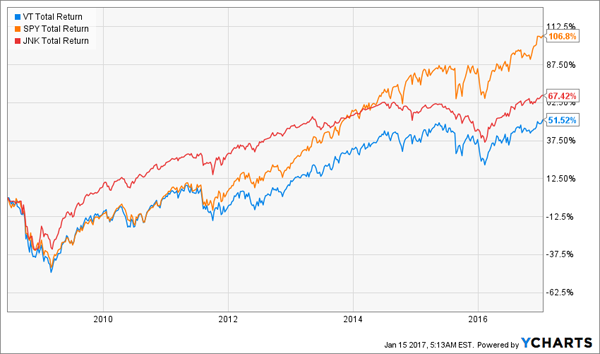 The bottom line? Stick with the USA. Your portfolio will thank you.

Buying American is all well and good, but if you’re relying on the misers of the S&P 500 for income, you’ll come up short: SPY yields just 2.0%, so you’d need a million-dollar nest egg just to generate a measly $20,000 in income.

Sure, you could juice that a little by, say, adding JNK, with its 6.0% yield, but its dividend is all over the map—and mostly headed lower.

And how the heck are you supposed to plan your retirement when you’re dealing with a payout like this? 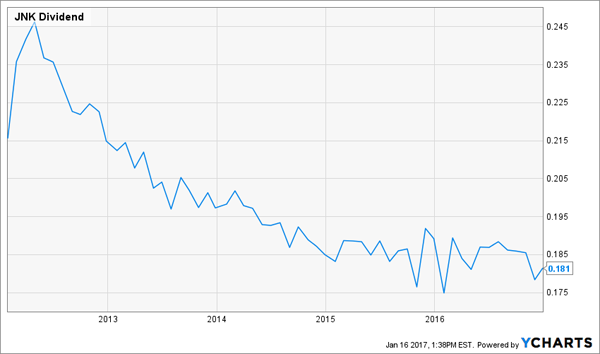 I’m talking about our 8.0% “No-Withdrawal” retirement portfolio, which gives you the high, safe yields and double-digit gain potential you need to clock out of the workforce stress-free.

And no, you won’t find a single international stock here—every one of the 6 undervalued investments in this portfolio is 100% American, so, as I’ve just demonstrated, you’re getting higher gain potential and downside protection right out of the gate.

But don’t take that to mean this portfolio isn’t diversified: these 6 dividend machines come from wildly different corners of the market—from high-yield real estate investment trusts (REITs) to closed-end funds (CEFs) and preferred shares—asset classes too many investors ignore in their quest for income.

Now I want to take you inside this portfolio and name each of the 6 dynamic investments it’s built on, with steady payouts like 8.1%, 9.4% … and even 10.1%. Simply click here to get the whole profitable story now.