Revealed: Buffett’s Secret Dividend (yours at a 16% discount)

Today I’m going to show you a bargain-priced closed-end fund (CEF) that’s a standout now—not only because it’s a steal, but because it holds some of the best stocks on the market.

In fact, it takes its inspiration from one of the best investors of all time—Warren Buffett. And the fact that it pays a near 4% dividend yield doesn’t exactly hurt, either.

Before I reveal this fund, let me explain something.

When someone says a CEF is “cheap,” they’re usually referring to the difference between how much that fund sells for on the market (its market price) and the intrinsic value of its portfolio if it were liquidated now—known as the net asset value, or NAV.

As you can probably imagine, this can be a huge opportunity.

How to Read CEF Discounts and Premiums

Premiums and discounts can vary widely. Currently, the CEF with the largest premium of all is the Stone Harbor Emerging Markets Income Fund (EDF), at a shocking 43.7%. That’s not normal—EDF actually traded at a discount less than three years ago, and has traded at a much smaller premium more recently:

A Shocking Surge in Market Demand 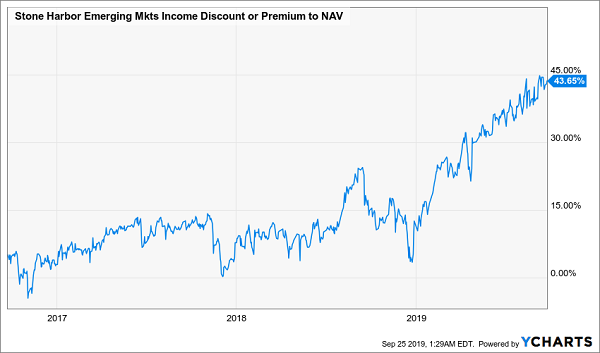 Here’s the truly wild part: this has nothing to do with outperformance.

You’d expect the best CEFs to trade at the highest premiums, but that isn’t usually the case. In fact, EDF’s NAV return, even factoring in dividends, has barely broken even and is far below what an index fund would have gotten you in the same period: 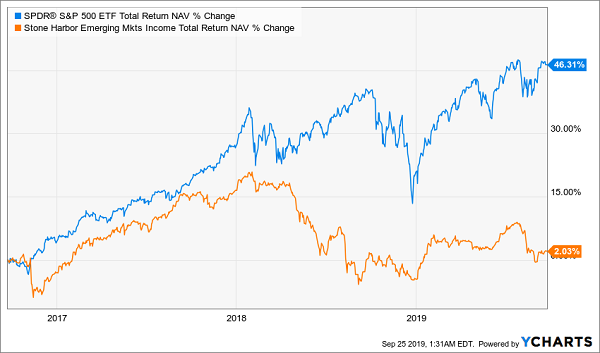 EDF is exactly the kind of CEF you want to avoid: one with a huge premium all of a sudden not backed up by fundamental performance. That scenario can only end in tears, because when investors realize their mistake and start selling, you’re looking at that 43.6% premium turning into a 43.6% loss.

On the other hand, the largest discount in CEFs belongs to the Boulder Growth & Income Fund (BIF), at a massive 16.2%, despite the fact that this CEF’s total return has kept up with the S&P 500:

Matching the Market, With Oversized Income 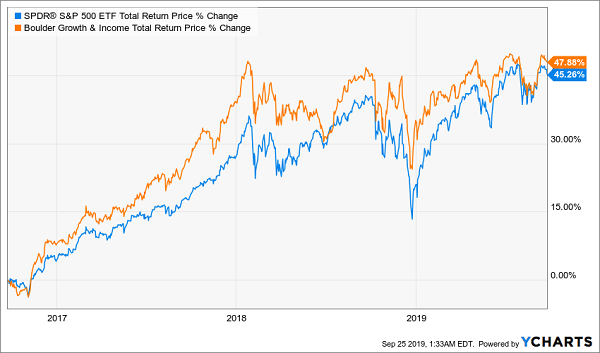 What makes this more impressive is BIF’s 3.8% yield, a bit over double what the average S&P 500 stock pays. That means more cash payouts you can use as passive income—or reinvest to compound the gains you see here.

BIF is a much better choice than EDF. If we zoom out, we see that BIF has trounced EDF for a long time: 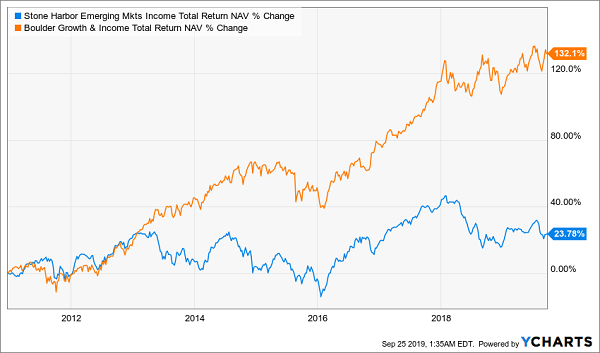 Obviously, BIF is the one that deserves the premium—especially when we dig into its portfolio.

As a value fund, BIF is designed to focus on companies with large moats, reliable, growing cash flow and solid management—in other words, the strengths that have given Warren Buffett his massive market outperformance for over half a century.

In fact, that’s where BIF got its inspiration: the fund invests a third of its assets in Berkshire Hathaway (BRK.A, BRK.B), its top holding. BIF diversifies further into names like Yum Brands (YUM), Cisco Systems (CSCO) and Walmart (WMT)—in other words, more companies with histories of focusing on cash flow and growing earnings.

This is why BIF has been a huge winner for years.

The story with EDF is the opposite. EDF holds a bunch of risky debts from countries with unstable governments and currencies. Its largest holding is debt issued by Argentina—the same country that has defaulted a bunch of times over the years. Its other top holdings are debts from Russia, Iraq, Lebanon, Egypt and Ghana—not exactly places that inspire the most investor confidence.

No wonder EDF has barely turned a profit over the last three years.

That may make you wonder: why is BIF the one with the discount and EDF is overpriced? The answer is simple: CEFs are crazy.

I mean that literally. A rational market is one where prices are established through a rational analysis of fundamental value. ETFs are a rational market, as their prices tend to stay within 1% of their NAVs.

Mutual funds are a rational market, too, where any investor’s stake is equal to their ownership of the mutual fund’s assets. But CEFs are a wild west of random inflows and outflows of capital that do not represent intrinsic value.

That creates opportunities to buy in while the market is going crazy—and sell when it’s gone crazy in the opposite direction. That’s the opportunity now with BIF (and the risk with EDF).

BIF is just the start when it comes to mispriced CEFs: I’ve tracked down 5 more of these misunderstood funds that are nearly as cheap—so much so that I fully expect huge 20% price upside in the next 12 months alone.

That’s not all: these bizarrely mispriced funds also pay twice as much in dividends: I’m talking outsized 8% payouts, on average! Put it all together and we’re looking at fast 28%+ total returns here.

And keep in mind that this 8% dividend is just the average. One of these picks pays an incredible 9.3% now and has exploded 743% since inception (absolutely dominating the market). This retirement “must have” has plenty more upside, too, thanks to its current massive discount.

I know it sounds crazy that a fund could still be cheap after a run like that, but this is yet another example of the complete disconnect between CEF performance and pricing. And now is a terrific time to jump in.

The whole “5-pack” of 8%+-yielding CEFs (with 20%+ price upside in the next 12 months!) is waiting for you now. All you need to do is click here and I’ll share the full story: names, tickers, buy-under prices, my unfiltered take on management—everything you need to know!