An “early alert system” for double-digit stock growth is hiding in plain sight. And right now, it is warming up for 50 stocks we’re about to talk about. I’ll share their names and tickers in a moment.

This signal preceded 384% to 1,000%+ total returns for a pair of seemingly plain-Jane companies. Better still: It’s a signal that all of us are privy to. In fact, thousands of companies write press releases at least once a year announcing these “alerts” to the world for all to see. Whole websites are dedicated to them.

This alert system isn’t limited to naturally high-growth areas such as tech, either. Consider Marriott (MAR), which is one of the world’s leading hoteliers, and Pool Corp. (POOL) builds swimming pools and distributes replacement pool parts. These unassuming businesses couldn’t be more different, but the path to market-crushing returns is the same:

How Marriott and Pool Corp. Made Investors Rich 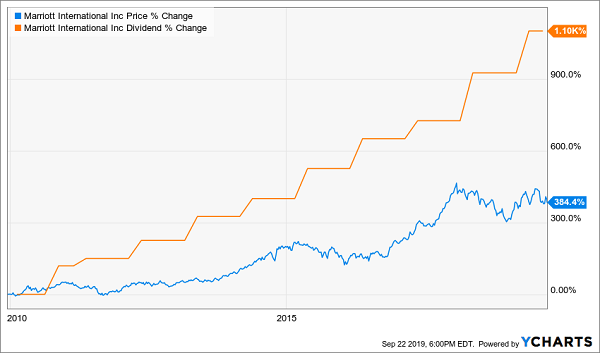 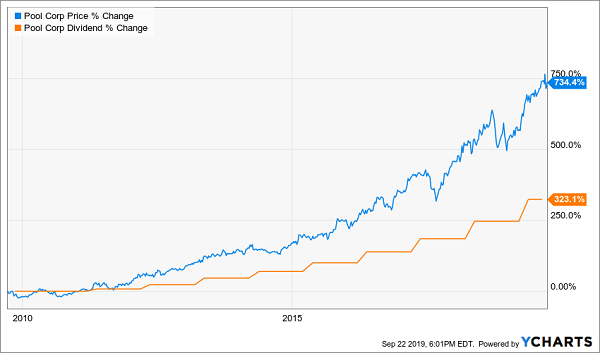 That’s right: The path to price performance is lined with dividend increases.

I’m about to show you 50 payout hikes that I expect to be announced over the next three months. Each of them have the potential to light a fire under shares over the next year or so, for gains of at least 10% regardless of what this indecisive market does.

Aggressive dividend payers often attract new money like moths to a porch light. Typically, when a company routinely unleashes double-digit dividend hikes, you can look behind it and see a trail of new money chasing the stock higher. That’s because not only do dividends mean more income for shareholders (naturally!)—but big, fat dividend hikes usually mean that the company is generating gobs of cash, and that management is confident that’ll remain the case going forward.

Those are signs of a healthy business with room to grow.

It’s easy to overlook these kinds of stocks because they often don’t yield very much, sometimes 2%, even 1%. But look at the charts above. The yield keeps shrinking because investors are buying shares hand over fist.

This is why it’s important to keep a close watch on companies that routinely raise their dividends. We want to collect more cash, of course, but we also want our stocks to rocket higher like Pool Corp. and Marriott.

So check out these 50 dividend growers (divided into Dividend Aristocrats, other blue chips, MLPs and REITs) that are widely expected to announce freshened-up payouts in the quarter to come. If you’re trying to double your money in stocks, these 50 are a good place to look.

Income investors should be plenty familiar with the Dividend Aristocrats. They’re a group of currently 57 dividend stocks that have grown their payouts on an annual basis for at least 25 consecutive years. Of course, some have been paying for far longer. Emerson Electric, which is due to announce a new pop to the payout in early November, hasn’t flinched for 62 years and counting.

Just remember: Some Dividend Aristocrats aren’t worth buying. While they might boast longevity, their pace has dropped off. So keep an eye on Aristocrats that still have the pedal down. 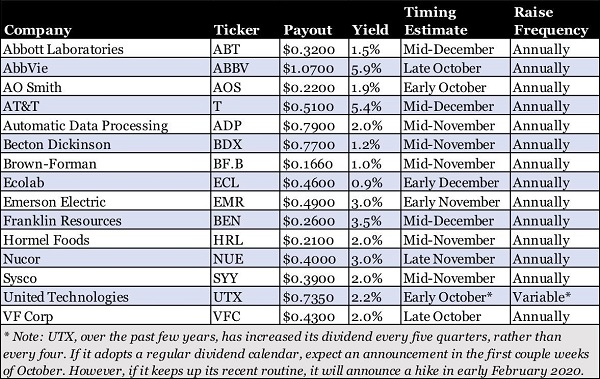 Dividend Spotlight: VF Corp. (VFC) is behind a wide list of apparel and accessory brands, including Vans, The North Face, Timberland and Jansport. It’s an unenviable business, given the chaos in the brick-and-mortar retail space forcing companies like VF Corp to adapt to a new “omnichannel” reality.

But VF Corp. isn’t standing still. Back in May, the company finished the spinoff of Kontour Brands (KTB), which it used to house its Wrangler and Lee denim brands, as well as its outlet operations.

I know: You don’t grow by shrinking. But in VF Corp.’s case, this could mean good things for the company. Canaccord analyst Camilo Lyon notes that VFC will emerge “as a much leaner and more agile business, with revenue and gross margin characteristics that should show accelerated growth from the faster growing brands and margin expansion from mix now that Kontoor Brands has effectively been spun out.”

The spinoff also means something interesting for VF Corp.’s dividend, which has been expanding for 46 consecutive years. After the spinoff, VFC actually announced a nearly 19% “cut” to the dividend—but it’s one that essentially reflects Kontour’s lost business (which shareholders at the time of the split actually received a small bit of ownership in).

This Is Just a Glitch in the Matrix 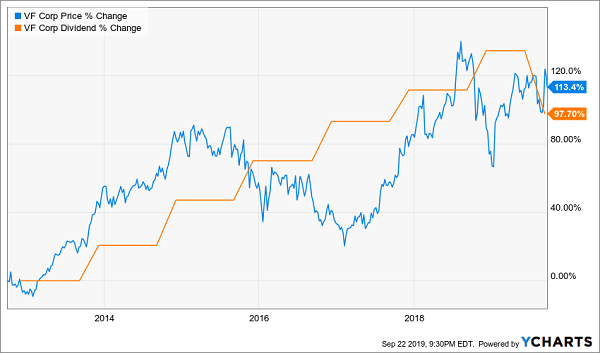 VF Corp., then, should have its Aristocrat membership card renewed later this year. But the size of the dividend increase will be an interesting indication of what’s next for the apparel giant.

Before we move on to yield-happier MLPs and REITs, I’ll point out that literally dozens more traditional companies are likely dividend raisers over the next few months. These nine stand out for various reasons, such as high nominal yield or rapid rate of recent dividend growth.

Dividend Spotlight: Broadcom (AVGO) shareholders might consider themselves lucky to be up 10% in 2019 given how things are going. Our tariff war with China is generally considered a threat to many of America’s chip companies, but Broadcom has the distinct displeasure of featuring Huawei as a customer.

That’s the same Huawei that was blacklisted by the U.S. government because of security reasons. Not good.

Broadcom has already come out and hacked $2 billion off its annual revenue outlook in part because of the disruption of Huawei’s business, as well as a broader slowdown in demand that CEO Hock Tan blames on “continued geopolitical uncertainties.”

In August, I pointed out that Broadcom is essentially sending off this dividend-growth signal: “Why are long-term wealth builders focused on Broadcom?” I wrote. “It has serious upside potential. Over the last five years, its payout has climbed 728%, and this ‘dividend magnet’ has pulled shares higher by 269%. That’s not bad, but they are actually ‘due’ to catch up to the higher payout.”

Broadcom’s dividend announcement should come alongside its quarterly earnings report. The two combined will tell us just how severe the interruption to this growth-and-dividend-growth story really is.

Master limited partnerships (MLPs) are indeed a tax headache, but for a few income investors, the high-yield potential makes that K-1 worth it.

Indeed, the nine MLPs that are likely to raise their dividend-esque “distributions” yield 8.3% on average, putting most other stocks to shame.

All nine share another feature that’s hard not to love: They raise those distributions not every year, but every quarter. By the time October rolls around, each of these energy companies likely will be announcing their fourth payout increase of 2019.

But some are more trustworthy than others.

Unfortunately, that’s not because of its rapid dividend-growth clip.

EQM Midstream Partners consists of a 950-mile natural gas pipeline and 18 nat-gas storage reservoirs, as well as an investment in the Mountain Valley Pipeline, 700 miles of high-pressure gathering lines and other assets. Like many similar companies, EQM suffered amid the 2014 crash in energy prices … but unlike its peers, EQM never really got off the mat. It has lost two-thirds of its value since peaking in 2014, including a 25% decline in 2019.

But unlike companies such as Broadcom, Marriott and Pool Corp., which are rising alongside their dividends, I don’t expect the same with EQM, whose price has long been disconnected from its payout.

The problem? The company’s current distribution is outstripping its net income and, more importantly, cash flow from operations. EQM has been financing that payout through another means—one that can’t go on in perpetuity: 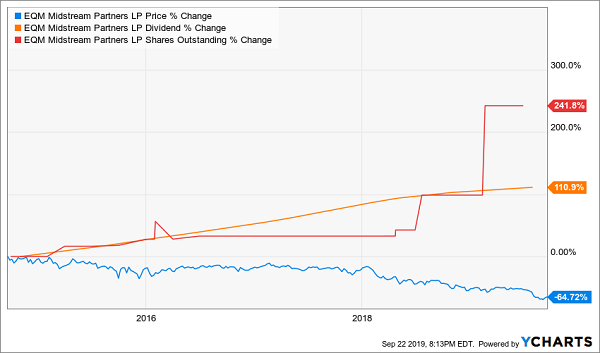 That, combined with a steady rise in long-term debt, from $3.45 billion in Q2 2018 to $4.9 billion last quarter, has me worried about the sustainability of hits outsize yield.

I mentioned earlier this year that real estate investment trusts (REITs) have a few boom times for dividend hikes, and the holiday season is one of them. By my estimation, at least 17 REITs are in line to up the payout ante for their shareholders.

And if there’s any area of the market where you want to keep an eye on dividend increases, it’s REITs. Their well-above-average dividend yields are a vital part of their superior total returns. Because they’re required to pay out at least 90% of their profits as dividends, regular hikes are a signal of a well-oiled growth machine. 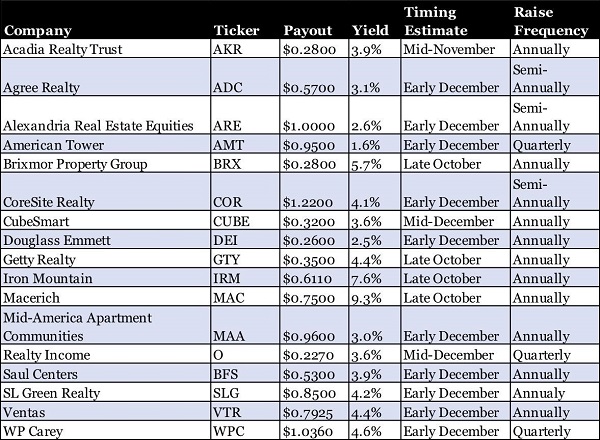 Dividend Spotlight: Alexandria Real Estate Equities (ARE) isn’t among the most familiar names in the real estate space, but it’s a natural growth play given its presence on the cutting edge.

Alexandria Real Estate does offices, but they do so in an innovative way that involves a focus on “cluster theory,” developed by Harvard Business School professor Michael E. Porter. “Clusters are geographic concentrations of interconnected companies and institutions in a particular field,” he says. This affects competition by increasing productivity of companies in the area, drive direction and pace of innovation, and stimulate the formation of new businesses, or so the theory goes.

You won’t be surprised by where these clusters tend to be: New York City, Boston, San Francisco, Seattle, North Carolina’s “Research Triangle,” among others.

Between 2013 and 2018, ARE has nearly doubled its net asset value, grown its funds from operations (FFO) by 50% and increased its dividend by about 43% – fairly rapidly by REIT standards. FFO for the first half of 2019 has climbed by another 5%.

Alexandria is also a rare real estate breed in that it pumps up its dividends not once but twice a year, and it’s due for its second hike of 2019 in the first week or two of December.

Several subscribers have written in recently asking which dividend strategy is the best one to increase their wealth over the long haul.

The answer? Dividend growth—just like I’ve been discussing with you. In fact, the dividend-growth strategy in my Hidden Yields product is is roughly doubling our money every four years.

We’re doing it simply by buying the stocks that are increasing their dividends the fastest. And we’re buying without worrying about the bear market boogeyman that unravels most investors.

Remember: For us, bear markets are buying opportunities. December 2018 sure was! Our secret was that we didn’t panic. We held onto our elite dividend growers and used the opportunity to buy more.

To quote the late, great Eddie Money, many investors “wanna go back” and buy those December bargains. Of course they can’t, but you can do the next best thing and buy my seven favorite dividend growers right now.

Don’t regret not buying these seven when we revisit these picks months from now! All are poised for fast 50% gains like the two examples we smartly bought in December.

I use computers, screens, tools and my own head to uncover dividend moonshots that will easily pay you 17% per year. That’s enough to double your money in just over 4 years.

Please click here to learn the names of my seven favorite dividend stocks with 100%+ upside. I’ll share their names, tickers and my full research with you including my recommended buy-up-to prices.