Growth or yield? Why choose when we can have both.

There are 32 dividend hikes on the way that are going to set up their investors for a big 12 months ahead. How? Simple–these payout raises are going to provide fuel to their attached share prices. The 10%+ raises (and there will be double-digit increases) in particular are going to position their shareholders for safe 10% to 12% returns in the year ahead regardless of what the broader stock market does.

Ever wonder why the yield on your favorite dividend aristocrat always looks low even though the firm is regularly raising that payout? Pull up its stock chart and you’ll see that its share price follows its dividend higher like a magnet. For example let’s consider this pair of “dividend doublers”: 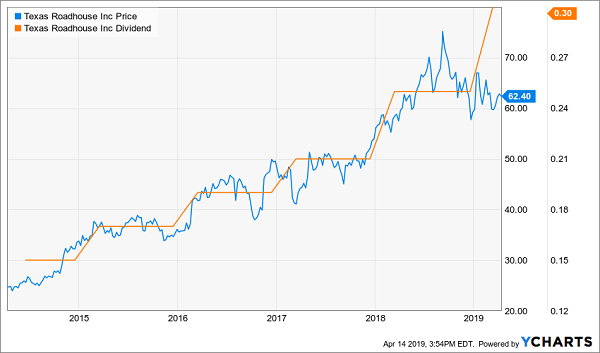 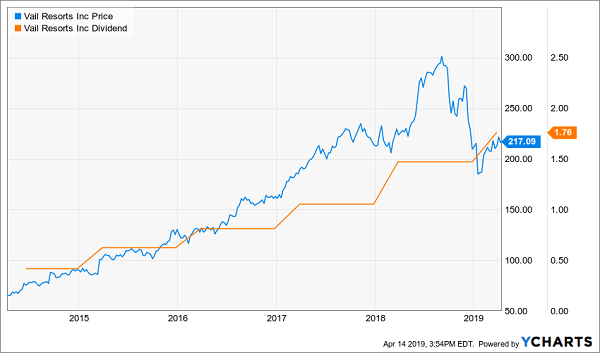 Their soaring payouts and profits are about all they have in common. Texas Roadhouse (TXRH) is a mid-level steak restaurant chain that caters to the average American. Vail Resorts (MTN) is a “one percenter” stock that owns and operates high-end ski resorts, condos and lodgings. But both have raised their payouts generously every year, and both their stocks have more than doubled in less than five years.

This is why we keep a close eye on serial dividend raisers. Yield is nice, but doubling our money is even better! In this spirit here are 32 dividend growers to watch in upcoming months.

Real estate investment trusts (REITs) have no equal in retirement-focused accounts. Their very structure requires them to deliver the lion’s share of their taxable income to investors as dividends. If you’re an income investor, you need to be watching this sector like a hawk (if you aren’t already).

REITs have a couple “busy seasons” for dividend-increase announcements, including February and December. But the next couple months should see a decent handful of real estate plays hike their regular dividends. 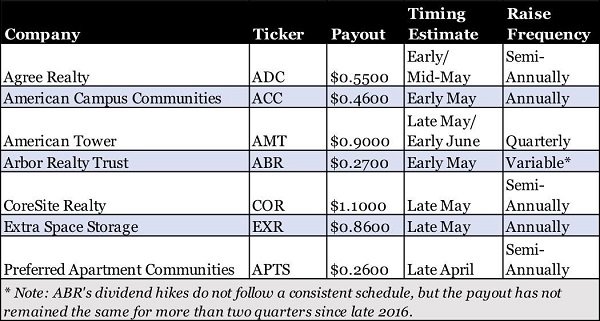 Dividend Spotlight: CoreSite Realty (COR): CoreSite is a datacenter REIT with 21 operation centers across eight major communications markets in the U.S. That doesn’t sound like CoreSite is casting a wide net, but each of those locations packs a serious punch, allowing the company to service more than 1,350 customers.

Credit CoreSite’s outstanding operations. The company reported a 20.7% improvement in net income that fueled a 14.2% boom in funds from operations (FFO, an important REIT profitability metric). CoreSite paid out 15.6% more in dividends, too, but FFO growth kept the payout ratio at a perfectly manageable 82%.

Up next is a likely dividend-increase declaration in the final week of May. And if history is any indication, look for another hike to be announced in early December. 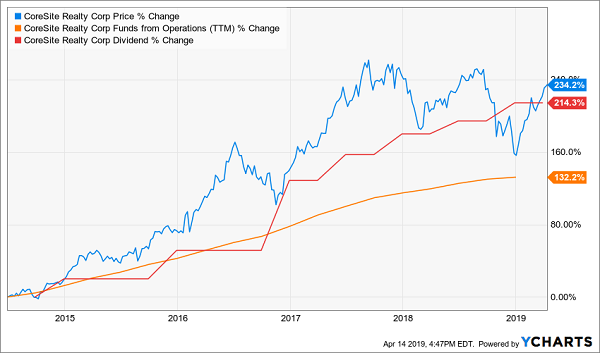 The last time I guided you through some likely dividend raisers, I pointed out many master limited partnerships (MLPs) that improve their distributions on a quarterly basis – not once a year, but four times a year. So the list of companies on tap for April and May are pretty similar, but a couple things have changed in the space since then.

For one, Western Gas Equity Partners LP and Western Gas Partners LP have combined to become Western Midstream Partners LP (WES). This follows a slew of mergers in the MLP industry following 2018’s changes to the tax law.

Also, Andeavor Logistics LP (ANDX) announced the same distribution it had for the prior two quarters, so its quarterly hikes appear to be a thing of the past.

For instance, its Pipelines/Transportation segment includes roughly 805 miles of crude and product transportation pipelines, a 600-mile crude oil gathering system in Arkansas, and storage facilities with 10 million barrels of active shell capacity. It also has light product terminals in Texas, Tennessee and Arkansas.

That payout didn’t grow in a straight line, of course. DKL has been growing its distributions every single quarter for years, which is fantastic for investors because it only adds to the power of compounding.

The Dividend Aristocrats are a group of 57 S&P 500 companies that have increased their dividends on an annual basis for at least 25 consecutive years, though many of them have done so for many years longer than that.

But they’re not all gems. I’ve recently pointed out a few Dividend Aristocrats that aren’t worth your time. Their business prospects are middling, and dividend growth has become downright begrudging, as if the only reason they’re raising them isn’t to reward shareholders, but instead to just keep their membership cards updated.

As I pointed out at the start of the year:

J&J spent 2018 in court battling off cases related to claims that their baby powder contained asbestos and caused mesothelioma to a few people who were exposed to it. “We will continue to defend the safety of our product because it does not contain asbestos or cause mesothelioma,” the company said in May after losing a ruling in California.

But Reuters dropped a bombshell report in December saying that internal documents “show that the company’s powder was sometimes tainted with carcinogenic asbestos and that J&J kept that information from regulators and the public” for decades. JNJ tanked 13% in five trading days following Reuters’ report, and that very likely won’t be the last of it. Johnson & Johnson not only risks suffering a massive reputational hit to its consumer brands, but its legal path forward suddenly looks fraught with potholes.

These issues threaten to put a cap on Johnson & Johnson in the near-term. In turn, that could put some pressure on the company to please shareholders in any way it can – including writing significantly fatter dividend checks. Payout growth has been respectable, at about 28% since early 2015, but J&J might need to deliver something truly generous in mid-April, when it typically announces its annual dividend increase.

The Best of the Rest

There are still dozens more likely dividend increases coming in the next two months. But these are a few of the most intriguing companies, whether it’s because they’re at a pivot point, running hot or just not your run-of-the-mill company.

But the most interesting of the bunch right now is America’s largest company.

Dividend Spotlight: Apple (AAPL): Apple has been through this before. Back in 2015 and 2016, Wall Street was concerned that Apple had lost its innovative edge, that its product was to expensive for China, and that its other offerings would never make up for any weakness in iPhone sales.

Apple (AAPL) Has a History of Punishing Doubters 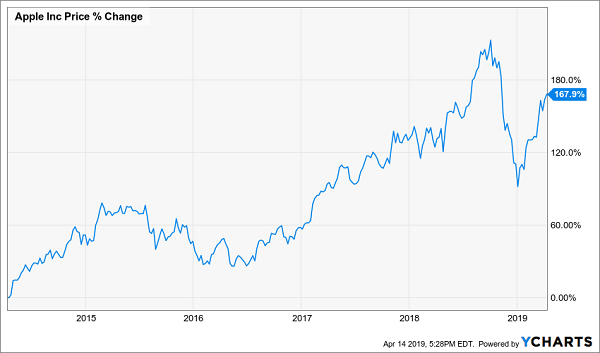 Within a few years, it had doubled its market cap from a trench around $500 billion to a high above $1 trillion, making it the first American company to reach that lofty level.

Apple has found itself in the same position again recently, however. The stock lost about a third of its value on iPhone sales declines (caused in part by Chinese weakness!) and skepticism about its lack of other game-changing devices.

And yet, AAPL shares have defied logic by rebounding 40% off a big share dip after the company made a rare cut to its sales guidance on Jan. 2. What gives? Well, Morgan Stanley analysts recently said year-over-year growth to the iPhone “installed base” in China was its best in 15 months, and the tech giant has announced a series of product upgrades and new services, including Apple News+, streaming TV content and even an Apple credit card.

Don’t sleep on the dividend, though. Apple’s payout has nearly doubled since it restarted regular distributions in mid-2012. And considering a skinflint 23% payout ratio and renowned ability to generate free cash, Apple can afford to continue making significant hikes – even as it finds ways to grow and silence the haters.

Retire on DIVIDENDS ALONE With This “Ultimate” Portfolio

I love “sneaky” stocks like Apple (AAPL) and Visa (V) because while growth investors know all about their prospects, many income investors shun them because of their uninspiring headline yields.

But they’re not perfect retirement holdings. Even as their dividends grow over time, it will take at least a decade (if not much more) to deliver the 8%-plus yields you need to make sure you’re retiring by cashing dividend checks, not by cutting into your portfolio.

No, if you want to be able to retire on dividends alone, you need the consistent, growing payouts from the stocks I hold in my 8%-yielding “No Withdrawal” retirement portfolio.

Decades ago, retirees never really worried about having to sell their nest egg for scrap in retirement because … well, people didn’t last very long past retirement. That’s not the case anymore. Science says you and I are likely living another 10 to 20 years once we clear out our desks, which means the bulk of our retirement income has to come from income, not siphoning off our accounts and praying they last.

That’s why my “No Withdrawal” portfolio boasts three key features – to address the three primary needs you’ll have in retirement:

My “No Withdrawal” portfolio is an all-star cast of stocks that deliver on all three points: an 8% average yield, dividend growth and significant price appreciation potential. So you can sit back and collect dividend checks but also be covered should disaster strike, forcing you to dip into your retirement account.

This diversified set of picks features the “Alphabet Soup” of dividends: REITs, BDCs and CEFs, which are all fantastic high-income assets that often go overlooked by Wall Street analysts and pundits alike.

This portfolio will let you live off dividend income alone without ever touching your nest egg.

But best of all, you’ll generate so much income that you’ll be able to cover far more than just the necessities.

And you’ll be able to afford all this without wondering how you’ll cope should disaster strike.

Let me show you the way to the comfortable, secure retirement you’ve worked your tail off to enjoy. Click here and I’ll provide you with THREE special reports that show you how to build this “No Withdrawal” portfolio. You’ll get the names, tickers, buy prices and full analysis of their wealth-building potential–and it’s absolutely risk-FREE!