U.S. stocks posted modest gains this week, which was shortened by the Good Friday holiday. The first full week of earnings season saw largely positive reports, especially from the banks, given the fact that aggregate profits are expected to decline 3% to 4% in the first quarter.

The earnings decline in the face of robust gains to begin 2019 was enough to send strategists at Jefferies to the sidelines this week. On Monday, the firm lowered its rating on U.S. Equities to Modestly Bearish, in the context of their global asset allocation.

However, overall investor sentiment remains high in this country. According to Investors Intelligence, bullish newsletter writers outnumbered bears by the widest margin since October in a weekly survey. By the way, active traders view this as a contrarian indicator.

On the economic front, U.S. retail sales were reported on Thursday and exceeded expectations, both on the headline level and excluding autos. Growth was seen across the board in March, rebounding from a sales decline in February. In addition, the weekly jobless claims continued to tick lower this week, running at levels that haven’t been seen since the 1960’s.

China posted 6.4 % first-quarter GDP growth on Tuesday, which exceeded expectations. Reports also circulated this week that the U.S. and China will hold another round of trade talks at the end of the month.

Healthcare was a notable laggard this week and is actually down year-to-date, even though the S&P 500 is up about 16%. This week, talk of a move toward universal healthcare spooked investors. 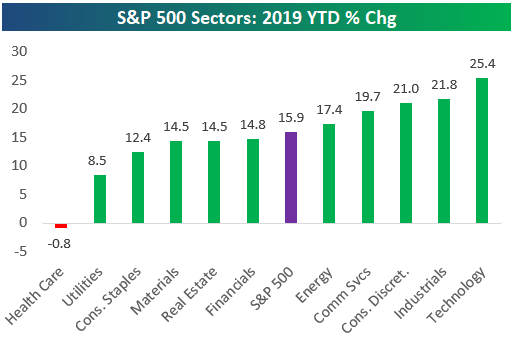 On the other hand, Qualcomm (QCOM) was the big winner this week. Shares gained 40% after the company settled a licensing dispute with Apple (AAPL) that had been a wet blanket holding the stock back.

Demand for IPOs also remains healthy, as evidenced by Zoom Video (ZM) and Pinterest (PINS), which gained 72% and 28% respectively, on their first days of trading.

Looking Ahead to Earnings Deluge and GDP

The earnings floodgate opens up next week, as evidenced by the select calendar below: 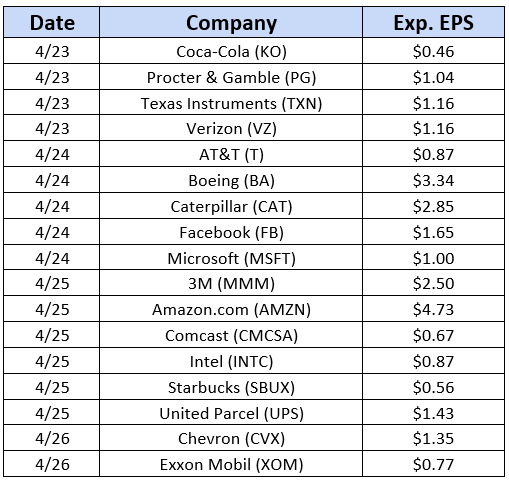 In economic activity, we’ll get multiple looks at the state of the U.S. housing market after weekly mortgage applications hit a nine-year high on Wednesday. Durable goods orders will be announced on Thursday, followed by the preliminary look at first-quarter GDP growth on Friday.

The latest sentiment readings suggest that investors are content with a market that’s up 16% in early 2019 and near record highs, even though quarterly earnings are on pace to decline for the first time in three years.

It’s times like this we’re often asked: “What can I buy now?” This can be especially troubling if you just received a tax refund from Uncle Sam or have been lagging in 2019 by owning “safe” stocks like healthcare and utilities.

The good news is, my colleague Brett Owens has the answer for these questions.

He’s devised a “pullback-proof” portfolio of 5 stocks with an average dividend yield north of 7%. They’re all still cheap even with the run we’ve seen in 2019; which affords downside protection, if we do see a pullback in the coming months.

These are exactly the kind of names you want to own now, especially if you’re retired or looking to supplement your income.

Not everyone can hope to catch lightning in a bottle like Qualcomm did this week and who needs the risk of trying to chase the next hot IPO of an unprofitable tech company?

Rather, these 5 stocks that Brett has found earn money today that’s used to reward investors with dividends that are 2x to 3x higher than what cash and bonds are currently paying. 7%-plus yields that will be paid, whether the S&P 500 goes up another 5%, falls 5% or remains flat for the remainder of the year.

Brett sees 7% to 15% annual price upside from these 5 “Steady Eddie” picks. The best part is that these payouts are growing! Consider his top pick of this quintet, a REIT paying an incredible 8.5% dividend that’s DOUBLED in just the last four years.

Want to see more? Our entire 5-stock “pullback proof” portfolio is waiting for you now. Click here to get full details on these “must-have” retirement plays: names, tickers, buy-under prices and the full story on how they generate their outsized dividends.