Shocker: These “Safe” 7% Dividends Will Lead the Market (Down)

But there’s a problem: recent scares like the inverted yield curve mean some utilities, and utility funds, have gotten ahead of themselves and are more prone to a pullback than most folks think. (The three 7%+-yielding closed-end funds (CEFs) I’ll show you shortly top this “overpriced” list.)

The worst part is, many people think utilities are underbought, because the benchmark Utilities Select Sector SPDR ETF (XLU) is up 8.3% year-to-date, half the 16% gain of the SPDR S&P 500 ETF (SPY). 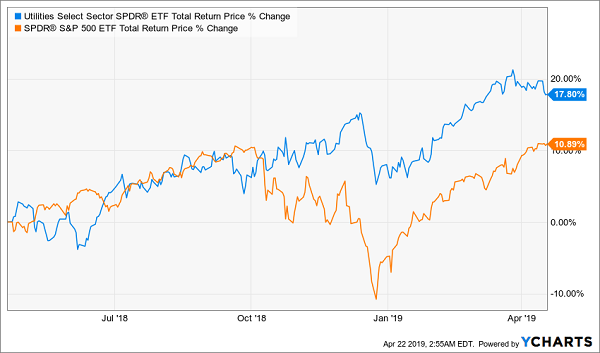 Interest-Rate Pause Should Boost Utilities. Here’s Why It Won’t.

But wait, you might be thinking, isn’t this a sleepy sector, the kind that doesn’t attract a frenzy? This is usually the case, but thanks to the Federal Reserve, things have changed.

As I’m sure you know, one of the big stories of 2019 is that the Fed will pause rate hikes while waiting to see if inflation gets overheated (so far, it hasn’t). In this new world, investments that theoretically go down when rates go up, like utilities, should get a push.

Note how I said theoretically. Because the market is slowly realizing that utilities aren’t as correlated to rate hikes as the theory suggests, which is why utilities have quietly outperformed the S&P 500 for years.

The Federal Reserve first started hiking rates in late 2015. According to our “rates-up-utilities-down” theory, this should have caused investors to pull out of safe, bond-like high-yielding assets like utilities.

But the exact opposite happened. 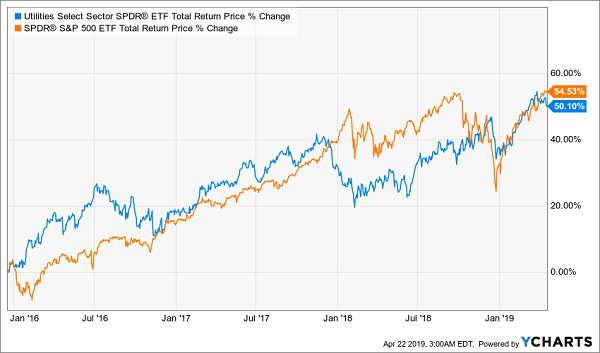 At the end of 2015 and the start of 2016, the market freaked out about higher rates, while utilities kept pounding higher. It took two full years before the market caught up with utilities.

This isn’t the first time this has happened.

When the Fed increased interest rates by over 200% in the mid-2000s and the economy seemed red hot, “boring” utilities crushed the market: 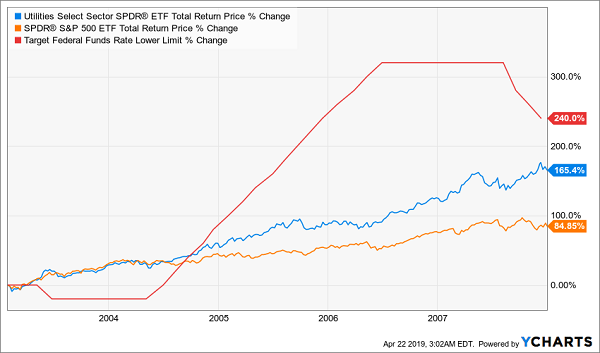 Clearly, the common wisdom that utilities fall when rates rise is wrong—they actually go up with rates.

The reason? When the Federal Reserve aggressively increases rates, it risks causing an inverted yield curve, a proven recession predictor. In response, cautious investors will put everything they can into low-risk assets like utilities, driving up their prices.

Now that the Fed is hitting the brakes on rate hikes, the risk of an inverted yield curve is disappearing, even though utilities have priced in this caution over the last few years.

That means utilities’ upside is vanishing fast—and the risk of a pullback is particularly high in the three funds we’ll look at now.

The Gabelli Utility Trust (GUT) might look tempting, with its whopping 8.7% dividend yield.

And the truth is, it’s a great fund in good times, giving investors an 11% annualized return over the last decade. But GUT trades at an absurd 40% premium to its net asset value (NAV), as investors drove its price far ahead of the performance of the fund’s portfolio in the last year. 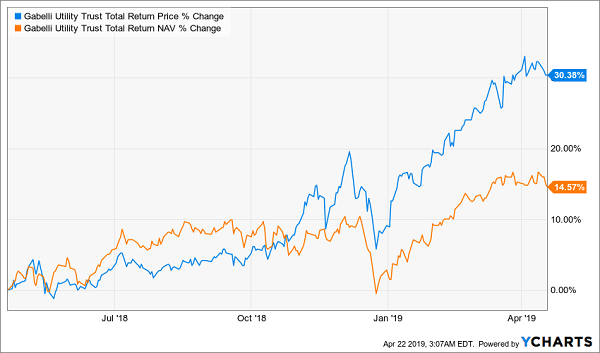 This is a good fund but a crowded trade right now, making this the time to sell.

The situation isn’t so dire with the DNP Select Income Fund (DNP), but that doesn’t mean DNP is a buy, either.

With a 17.2% premium to NAV, investors have priced in the 10.6% annualized return DNP delivered in its nine years on the market. And although DNP’s 6.8% yield is moderate enough to not be in danger of a cut anytime soon, its 2.3% expense ratio could limit total returns for investors in the short term, causing that premium to erode. In fact, the premium is already beginning to fade. 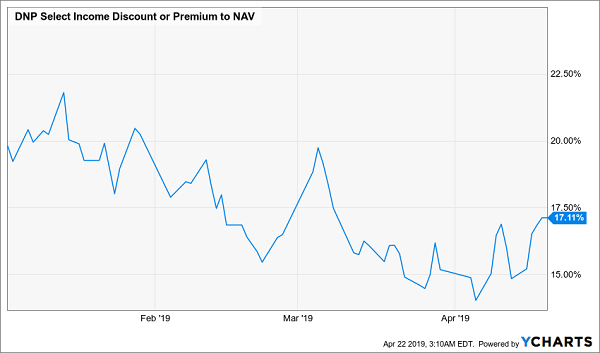 The third utilities fund to avoid is arguably the most baffling. The BlackRock Utilities & Infrastructure Trust (BUI) has been a good buy in the past, but it isn’t now. With a 3.1% premium to NAV, it may seem cheap compared to the others on this list. But BUI should trade at a discount, like it did at the start of 2018 and in November—especially since its one-year total NAV return is a pathetic 3.1%, far below the index’s double-digit return.

A Premium for No Good Reason 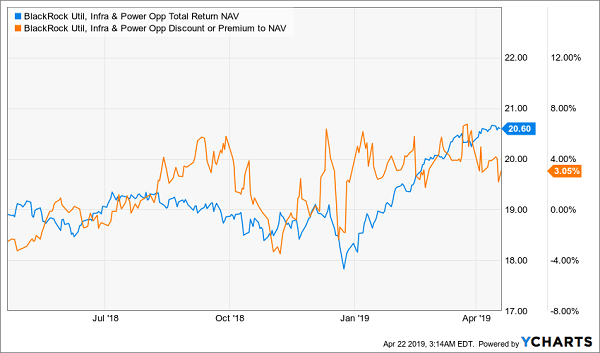 BUI’s 8.2% annualized return since inception seven years ago is weaker than all but one other utilities CEF, the Duff & Phelps Global Utility Fund (DPG), which trades at a 10.9% discount to NAV. But that’s justified considering DPG’s meek performance (it’s up a mere 4.5% annualized since its IPO a little over seven years ago). Until BUI trades at a discount, there’s no reason to consider buying it.

As investors, we’re constantly told we can have either big dividends or big gains … but not both.

And it’s a deception far too many people fall for—even though there are dozens of CEFs that bust this myth. Case in point: the 5 incredible income plays I’ve recently uncovered.

Each of these 5 amazing CEFs trades at a discount to NAV far below its usual range, practically locking them in for big upside as those discounts revert to the mean.

My forecast? We’re looking at easy 20%+ price gains in the next 12 months here.

As for dividends, how does an 8.3% average payout sound? And one of these 5 dynamic funds even throws off a staggering 9.8% in cash as I write. In other words, buying this high-yielding pick now gets you nearly 10% of your original investment back in cash every year.

But I do have to warn you of something: recent market gains haven’t completely bypassed these 5 funds, and their outsized discounts have narrowed slightly in the last few days. The time to act is now.

Click here and I’ll share my research on these 5 stout dividend funds: names, tickers, buy-under prices—everything you need to buy with confidence and tap that outsized 8.3% cash stream today.