If you’re an income hunter, you know it’s a difficult time. I’m here to tell you that it’s a dangerous time, too.

Tight income environments like this make dividend investors “reach for yield” at their own peril. They forget that a stock’s yield is only as good as its cash flow because, after all, a dividend is nothing more than a promise from a company.

CenturyLink (CTL) recently reminded us of this. Its promised $0.54 per share dividend exceeded its ability to pay. The firm’s payout ratio of 130% – the percentage of profits that it was paying as dividends–was an absurd overpromise that couldn’t last forever: 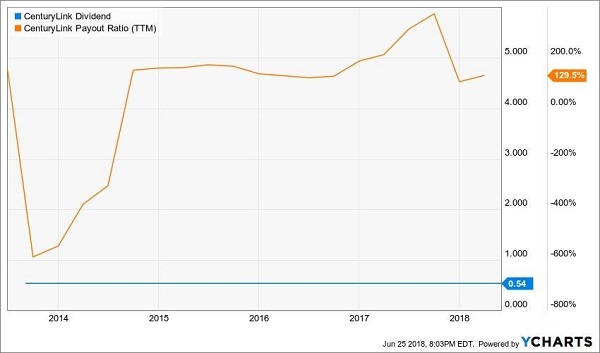 CEO Jeffrey Storey insisted his team remained “committed to and confident in our ability to maintain the dividend.” I understood the commitment, but questioned the confidence–taking on debt to pay dividends is a losing game. But then again, what else is the guy going to say?!

The “all-knowing” market sniffed out some of Jeff’s BS beforehand, but not the full extent of it. CTL topped in late August and has spiraled downwards since. Shares are down 45% in just six months: 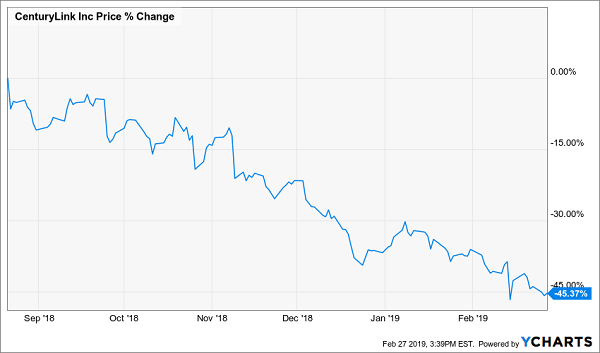 With CTL’s latest payout cut now in the rearview mirror, my publisher patted me on the back – and tasked me with finding four more dividends likely to drop! Luckily I keep a short list of problem payouts handy. So, let’s talk through another four-pack of dividend dumpster fires. If you own any of these stocks, you should probably sell them today to avoid heartache tomorrow.

At the start of 2019, I listed B&G Foods (BGS) as one of four dividend stocks investors would regret holding in 2019, and it looks like my concerns were warranted.

Despite that lineup, B&G has a number of financial issues, prompting me to warn investors, “B&G isn’t necessarily a ticking time bomb, but it could be a quagmire for new money in 2019. This is a stock to revisit and re-evaluate at a later time.” Since then, the quartet of stocks I warned against has underperformed significantly, with 6% average gains versus 17% for the S&P 500.

BGS has been the worst of the bunch, losing more than a quarter of its value.

So, let’s revisit. Since January, the company has laid an egg of a fourth-quarter earnings report that saw revenues decline 1.8% year-over-year thanks to the sale of Pirate Brands. Adjusted profits plunged 40%. Gross profits declined more than a percentage point. Full-year 2019 sales, adjusted EBITDA and EPS guidance all fell short of expectations. Debt remains problematic, at $1.6 billion versus just $11 million in cash.

The company will try to turn things around with a dramatic cost-savings initiative, but it will do so under Kenneth Romanzi, who will take over the CEO role for outgoing longtime chief Robert Cantwell.

It’s a cheap tire fire, at less than 10 times earnings, but it’s a tire fire all the same.

Here’s how bad things have gotten for Signet Jewelers (SIG)–the parent of Zales, Kay Jewelers and Jared, and the largest retailer of diamond jewelry:

On April 3, Signet reported that it swung to a Q4 net loss of $116 million from a year-ago profit of $343 million, that sales declined 6% and that same-store sales declined 2%. MarketWatch reported that the stock “surged” in premarket trade, however, because the top and bottom lines beat insanely low expectations.

But most of those gains fizzled by the end of the day, and shares are off 17% ever since. That has extended an 85% blood-letting since October 2015 spurred by multiple movements – consumers are abandoning malls, and millennials simply aren’t buying expensive jewelry the way previous generations did.

The only good news is that the bleeding has reduced SIG to a meager forward P/E of 7.4 while boosting its yield close to 7%. But you’re buying a company that analysts expect will shed about 4% in sales and 16% in profits by the end of 2021.

The cherry on top? You’re buying a company that’s currently under the microscope over allegations of a culture “in which men were consistently paid more than women and promoted more quickly,” and worse. “According to one of the claimants’ expert reports, in 2006 alone, there were 19,321 calls, of which 11,851 involved discrimination complaints; 1,519 were about sexual harassment.”

A stock already in freefall on the precipice of a PR nightmare? Hard pass.

Newell Brands (NWL) isn’t your typical consumer staples play. Instead of toilet paper and toothpaste or canned food and soda, Newell deals in glue and toasters.

The problem is, Newell Brands might have become too big for its britches. In 2018, activist investors Carl Icahn and Starboard Value fought for a breakup of the company via brand sales – and got their wish. The company has already sold off five brands, including Rawlings sports equipment and Jostens memorabilia. But even then, the company now expects to make less from the asset sales than originally planned for.

And the remaining operations continue to struggle. All three of its divisions suffered year-over-year declines during the fourth quarter. Worse, the company’s initial outlook for 2019 includes a forecast for 3%-5% sales declines and a meaningful decline in cash flow because of the assets it’s shipping off.

Yes, a forward P/E of less than 10 might seem attractive on its face, and its 6% yield is plump. But analysts expect those earnings to plunge 45% over the next two years, and the dividend has been frozen at 23 cents quarterly since 2017. I’m rooting for a turnaround in this cadre of beloved brands … but I’m not betting on it happening anytime soon.

Chico’s (CHS) – which operates Chico’s, White House Black Market and Soma – is one of several struggling retailers that has seen its operational performance decay and its footprint retreat. While the rise of e-commerce isn’t killing every brick-and-mortar retailer, it is thinning the herd of its weaker members – and Chico’s certainly qualifies.

Chico’s also is one of the most improbable dividend growers I’ve ever seen.

The company has suffered years of consecutive revenue declines. Most of its operational metrics (earnings, margins, free cash flow) are in clear downtrends. The retailer plans to shutter 250 locations over the next three years. And yet it not only has increased its dividend every year since 2010 – it has more than doubled it in that time, from 4 cents per share quarterly then to 8.75 cents per share today.

Chico’s certainly can’t afford its payout from an earnings perspective; analysts are expecting full-year profits of 8 cents per share for its current fiscal year and 12 cents next. It does have the cash to afford it, at $104 million in free cash flow versus $43 million in dividends paid … but the company also bought back $81 million of its own shares, drawing from its own cash pile to make up the difference. Those buybacks haven’t propped up shares, either; CHS has lost nearly two-thirds of its value over the past year alone.

Worst of all, even though the stock might be inexpensive on a trailing basis (13 P/E), look at its shrinking future earnings, and the forward P/E balloons to 30!

It’s not every day I warn investors to stay away from a dividend grower with a 10% yield, but here it is: Steer clear of Chico’s.

What should you buy instead of troubled stocks like these? Well, you know me – I’ve got five high paying plays I like much better right now with great growth potential on top of their generous current yields!

The “cash or bear market” no-win quandary inspired me to put together my 5-stock “Pullback-Proof” portfolio, which I’m going to GIVE you today.

These 5 income wonders deliver 2 things “blue-chip pretenders “like General Mills and Target never could, such as:

With the Dow regularly lurching a stomach-churning 1,000 points (or more) in a single day during pullbacks, I’m sure safe—and growing—7.5% every single year would have a lot of appeal.

These five stout stocks have sailed through meltdown after meltdown with their share prices intact, doling out huge cash dividends the entire time. Owners of these amazing “pullback-proof” plays might have wondered what all the fuss was about!

These five “pullback-proof” wonders give you the best of both worlds: a 7.5% CASH dividend that jumps year in and year out (forever), with your feet firmly planted on a share price that holds steady in a market inferno and floats higher when stocks go Zen.