Looking for high, safe income? If you’re like many investors, you probably look to electric utilities first.

But I think telecom stocks are a better bet right now. I’ll give you my top three in a minute. First, let me explain why.

The allure of utilities is obvious: you have to buy power whether the economy is soaring or tanking. Utilities also give you “China insurance,” because they’re almost entirely focused on the US.

But here’s the problem: after last year’s panic over rising interest rates sent utilities plunging, they’re back in vogue. Since January 1, the Utilities Select Sector SPDR Fund (XLU) has jumped 11.2%, while the S&P 500 is down 1.1%.

That rise has driven up utilities’ P/E ratios and chipped away at their dividend yields. Take Consolidated Edison (ED), for example. In the past few months, investors have bid up ConEd’s forward P/E ratio to 17.4, which is near an all-time high. 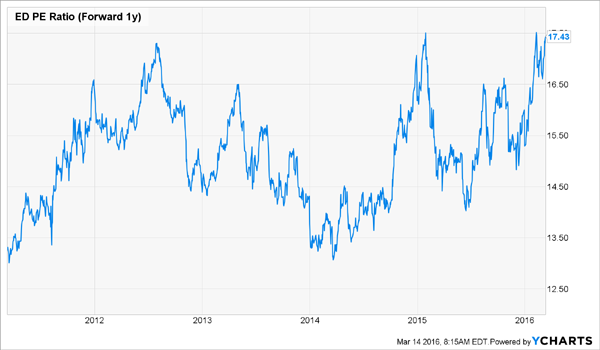 Meantime, ConEd’s soaring share price (up 14% year to date) has sent its dividend yield down to 3.6%, which is near an all-time low: 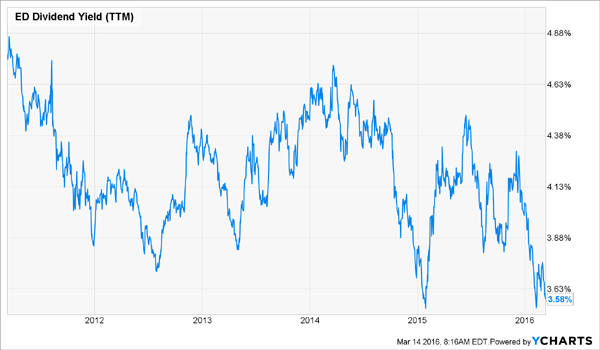 The bottom line? There are certainly still great buys in the electricity space (like the five I named a few weeks ago), but telecoms offer fatter yields and better value right now. Here are three of my favorites.

Like its cousins on the water, gas and electricity side, Verizon Communications (VZ) has seen its stock pop, to the tune of 13% so far this year. It looks like investors are finally waking up to the telco’s strengths, like its 30% share of the US wireless business and customer loyalty even a power company would envy.

Because here’s the truth about wireless customers: even though we love to grumble about our service, we’d rather suffer than switch. And Verizon’s customers are the most faithful of the bunch.

But despite Verizon’s big jump, it’s still a bargain, trading at just 12.7 times its forecast 2016 earnings. That’s not only below its five-year average of 13.6, but it’s cheaper than all the telcos mentioned above and the S&P 500, to boot! 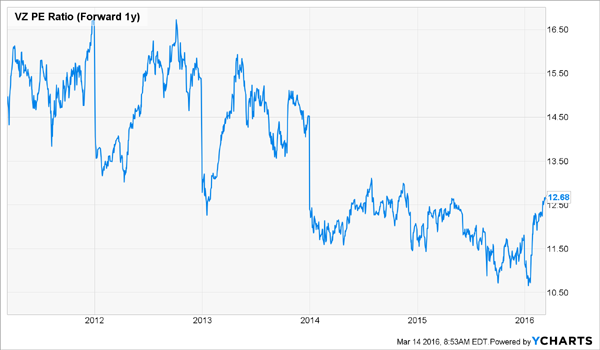 One downside of VZ’s surge is that it has cut the stock’s dividend yield. But that’s not a big problem, because it still pays out a tidy 4.3%— nearly double the average S&P 500 stock and 30% more than the Utilities Select Sector SPDR Fund.

And that dividend is well covered by Verizon’s earnings: its payout ratio (or the percentage of earnings paid out as dividends) stands at 48%, so it has plenty of room to keep its payout growing.

Comcast Corp. (CMCSA) isn’t technically a telecom stock, but the line between telcos and cable companies is so blurry, it’s safe to put it in the same class.

Lots of investors overlook Comcast because they worry about cord cutting, or the shift (particularly among millennials) away from cable and toward streaming services like Netflix (NFLX).

But Comcast is shrugging off the cord cutters: in Q4, the cable giant added 89,000 TV subscribers, marking the biggest gain since 2006.

And it also sells high-speed Internet access, so even if customers do defect, they’ll probably do it over a Comcast web connection: the company tacked on 460,000 broadband users in Q4.

The stock yields just 1.9%, but Comcast continues to send shareholders fatter dividend checks and buy back its shares. It’s slashed its share count by 11% in the past five years and plans to repurchase another $5 billion worth this year.

Those buybacks boost earnings per share—and share prices—and magnify Comcast’s dividend hikes, because it’s left with fewer shares on which to pay out.

And those dividend hikes are coming fast and furious: the company announced a 10% boost in February, the latest in a string that’s seen the dividend more than double in the last five years—so if you’d bought back then, you’d be yielding around 4.4% on your original investment today. 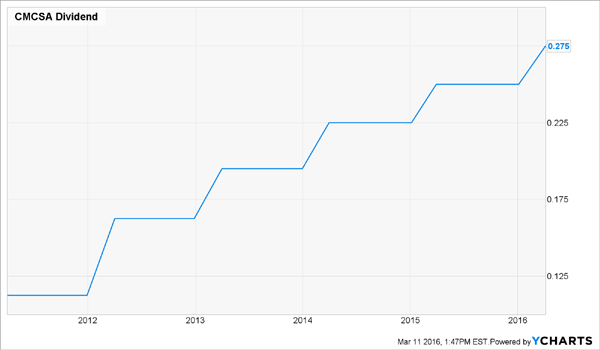 Add in strong revenue, earnings per share and operating cash flow (all of which were up in Q4) and a payout ratio of just 32.7%, and you can expect more big hikes and buybacks to come.

And you don’t have to pay a bundle to get in on the action: the stock trades at just 14.4 times its forecast 2016 earnings, below its five-year average and the S&P 500.

I first pounded the table on Telus Corp. (TU) on March 5. The stock is already up 5% since then, and I think it’s just getting started.

The Canadian telco’s wireless business chips in 52% of its sales; the rest comes from its wireline segment (landlines, high-speed Internet and TV).

Canadian companies are renowned for rewarding shareholders, and Telus, which yields 4.3%, is no exception.

For one, it continues to buy back shares, taking 8% of the total outstanding off the market in the past two years.

And if you like large, frequent dividend hikes (who doesn’t?), this is the telco for you. It’s been boosting its payout twice a year since 2010. In all, that adds up to an 85.3% hike in just six years (in Canadian dollars). Even better, Telus has already said it plans to raise its dividend twice in 2016, for a total increase of 10%.

Telus doubles down on dividends 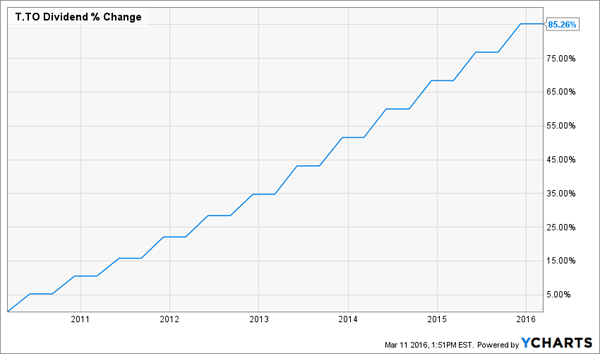 These three telecom stocks are great buys now, but I like three other little-known high-yielders even better.

They throw off payouts that are much fatter than anything you’ll find in the telecom sector. I’m talking about yields of 7.9%, 8.5% and 9.4%—and I fully expect their dividends to double in the years ahead.

What’s powering these incredible yields? Nothing less than the biggest demographic shift in US history. Consider that 10,000 Americans turn 65 every day—or one every 9 seconds—and they’ll continue to do so at that rate for the next 15 years.

All three of my top buys are smack in the middle of this massive shift: they provide direct healthcare to older Americans.

But they won’t stay hidden for long. So if you make your move now, you’ll immediately start collecting yields north of 7.9% and position yourself for 15–20% gains in the next 12 months as other investors rush in to tap these safe payouts.

That’s why I’m urging my subscribers to lock in these juicy dividends today, while they’re still cheap. Don’t miss out. Go right here to get the names of all 3 of these high-income wonders now.