You and I know why people buy real estate investment trusts (REITs). They’re income machines that are literally mandated to take the lion’s share of their profits and put them back into shareholders’ hands as cash dividends.

It’s no secret. Just about anyone who buys into REITs know that they produce far bigger dividends than your typical stock.

But put most people in front of a Yahoo! Finance or Google Finance stock chart, and they’re suddenly struck by selective amnesia. Because they forget that these charts only consider price gains and don’t include REITs’ outsized dividends.

Let’s look at some of the optical delusions investors find when they stumble across the charts–then look at what happens once you split out price and total returns (with dividends). Because when a yield gets up into the 7% to 8% range, its effect on your total profit is way bigger than most folks realize.

First up: healthcare REIT Omega Healthcare Investors (OHI). If you look at the 3-year price performance, it looks pretty lame. 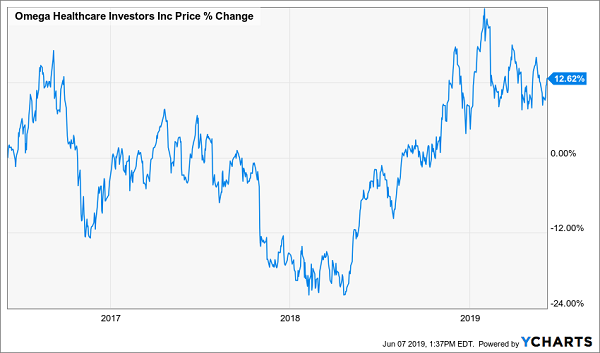 … But a 7% Dividend Makes It Sparkle 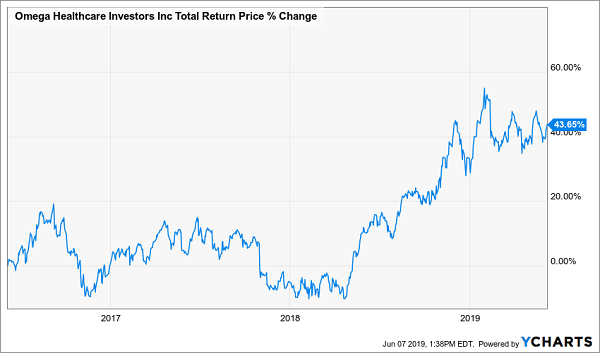 That’s right! OHI’s return is more than three TIMES bigger over the past three years with dividends than without.

I can’t stress this enough: Make sure you always double (and triple!) check what the chart you’re reading actually includes! If it doesn’t include dividends, you could be getting a completely misleading view of a REIT’s performance!

And if you think Omega is an outlier, consider this:

The Vanguard REIT ETF (VNQ)–a diversified real estate exchange-traded fund (ETF) that holds 190 different REITs–has put up admirable returns over the past 10 years. But ultimately, stocks have been the better investment, right?

It’s Tough to Beat the Market … 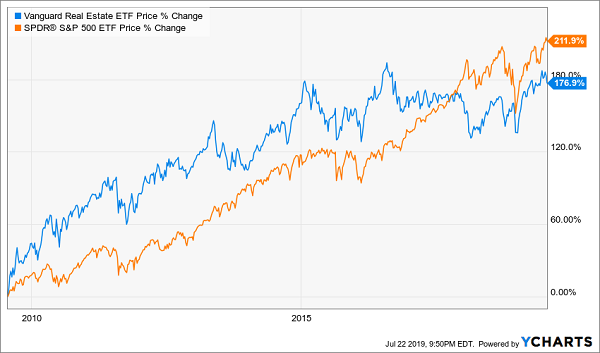 … But REITs Have the Winning Formula 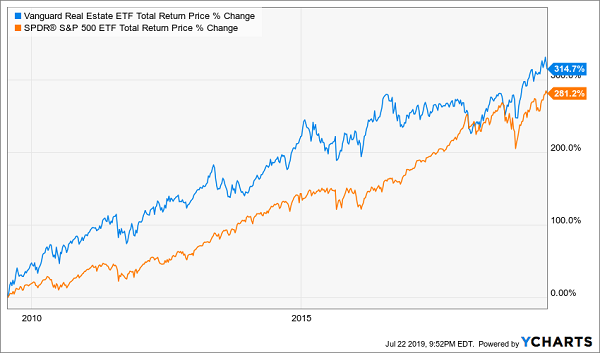 Now that you get the picture, let’s look at a trio of REITs that might fail the initial chart-sniff test, but are actually worth a look when you consider their massive dividends.

If you’ve ever seen a Red Lobster, Family Dollar or LA Fitness sitting there in its own building, it’s entirely possible you’re looking at a property owned by VEREIT (VER).

VEREIT is a massive real estate investment trust (REIT) that boasts nearly 4,000 properties. Its focus is single-tenant properties on a net-lease basis, which means it simply collects rent – taxes, insurance and maintenance fall to the tenants. It’s a fantastic system used by the likes of Realty Income (O) and National Retail Properties (NNN) that produces extremely reliable revenues and profits.

VEREIT is a reform story, too. It previously operated as American Realty Capital, until a massive accounting scandal decimated its leadership (and the stock) and forced the company to rebrand. It’s been living clean, and delivering a sizable dividend that has taken a truly pedestrian price return and turned it into a total return competitive with the market. 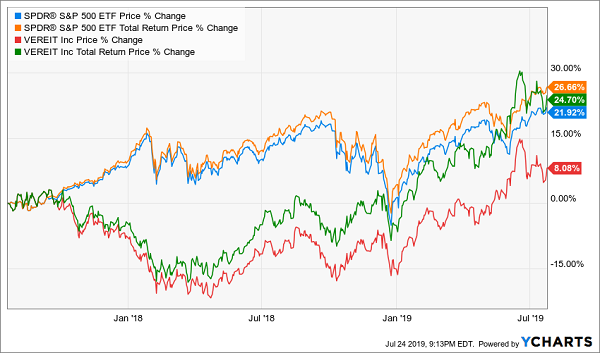 But operationally, VEREIT is mired in a holding pattern. Its most recent earnings report showed a slight overall decrease in the all-important adjusted funds from operations (FFO)–a REIT profitability metric that also determines the health of the dividend–and flat AFFO per share. That means VEREIT has shown zero growth over the past year.

VER shares are now priced about 13 times AFFO, which is fairly priced at best – certainly not attractive given the absence of any growth whatsoever. The dividend is great, but you’d like to see a little more potential here.

MGM Growth Properties (MGP) is a Las Vegas-focused REIT that was spun off of casino operator MGM Resorts International (MGM) back in 2016.

In total, MGM actually has 13 properties that include casinos in New York City, Atlantic City, Cleveland and the District of Columbia, among other locales. But its best-known properties–which include Luxor, Mandalay Bay and The Mirage–are Vegas mainstays. But don’t discount the non-traditional gaming locations, because those help provide a hedge against the ebbs and flows of Sin City’s popularity.

MGM Growth Properties has struggled of late, though the track record since its 2016 IPO has been pretty solid, including a market-beating performance once you include the company’s substantial dividend (green line in the chart below).

MGM Growth Properties (MGP) Lives Up to Its Name 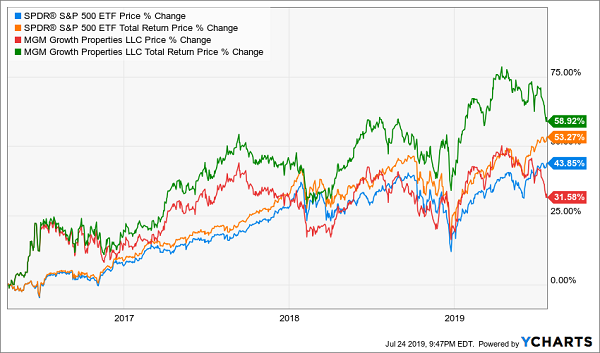 That dividend, by the way, is growing like a weed. The REIT had expanded its payout by a little more than 30% between its April 2016 IPO and its April 2019 investor presentation, then announced another uptick in the payout in June. MGM Growth Properties is now paying out 46.75 cents per share quarterly that it can easily cover; based on the past few quarters, its AFFO payout ratio sits around 83%-85%. Better still, its profitability is booming, with 2018 AFFO up 11% year-over-year.

You don’t need to roll the dice on an individual stock to get massive yields out of the real estate space. With Cohen & Steers REIT and Preferred Income Fund (RNP), you’ll enjoy the benefits of diversification in a fund managed by some of the investing world’s best REIT minds

Cohen & Steers’ RNP is a closed-end fund (CEF), and admittedly, it’s not a pure play on real estate–but that’s OK. About half the fund is invested in REITs such as American Tower (AMT), Equinix (EQIX) and Prologis (PLD). The other half of the fund’s assets are dedicated to preferred stocks – another high-yield asset that’s typically used to provide portfolio stability.

The downside of preferreds, of course, is that they don’t provide a lot of growth potential, either. And as a result, RNP has grossly lagged the S&P 500 … 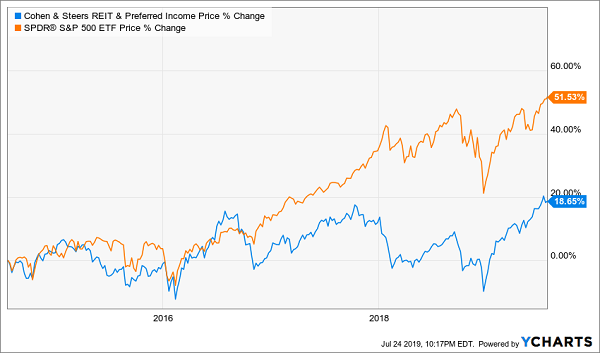 … until you factor in the CEF’s hefty payout, which closes the gap and then some! 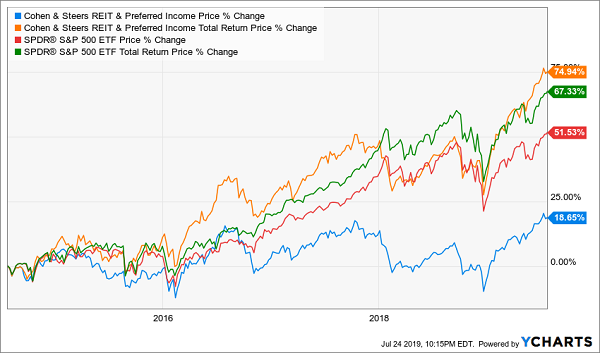 All you have to do is keep your eyes off the price chart and let the cash pile up.

Retirees that don’t? They clip coupons.

The last time all five of my indicators flashed green (like they are this very minute), the group of stocks I want to show you in my 2019 REIT Playbook – where cash dividends of 6%, 7% and even 8% are commonplace – started red-hot rallies that resulted in triple-digit profits.

One member of this snubbed group of stocks – a rock-steady “landlord” spinning off a 7%-plus cash dividend – did something that income plays just aren’t supposed to do: 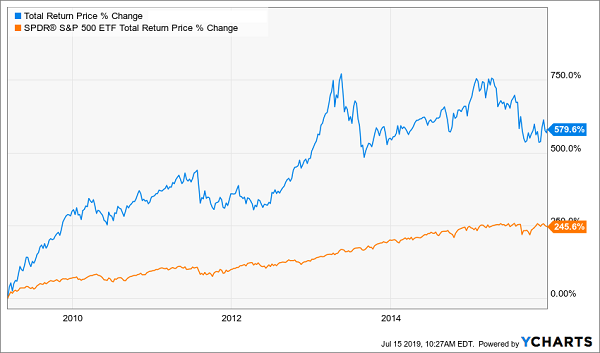 That was four years ago. Fast-forward to today, and the Federal Reserve has put its hand on the easy-money spigot, triggering the last of my five buy signals. And now, I have another pair of urgent REIT buys–boasting triple-digit price potential and yields of nearly 9%–that I want to email to you now.

The payouts are simply “going parabolic,” but it’s important that you add these stocks to your retirement portfolio now. Because when their prices go out, you won’t just miss out on their triple-digit gains–but those dividends will shrink on new buyers by the day.

Check out my brand new 2019 REIT Playbook here to receive my full analysis on these urgent REIT buys with 114% upside ahead. I’ll not only unmask the tickers and buy prices, but I’ll give you a five-step “game plan” to grab the biggest gains from this sudden opportunity.