Barron’s swapped out Bill Gross for Doubleline Capital founder Jeffrey Gundlach in its 2016 Roundtable. The publication says that Gross decided to resign his post. Whatever the case, it’s a good trade as Gundlach has had better calls and performance for years. Long live the new bond king!

His magistrate is currently warning investors about unexpected “collateral damage” from $30 oil. His warnings will sound familiar to regular readers, as we’ve already called out big oil as a big dividend trap, and picked on MLPs with unsustainable payouts.

Now, let’s dive into Gundlach’s second-level analysis that identifies a subtle but serious problem with a popular payout vehicle. He told Barron’s:

A huge percentage of North American energy companies are losing money. Probably the worst investment is a junk-bond index fund, because it will get overexposed to (energy) defaults. Simplistically, the junk-bond market is a bet on oil. If you are betting on oil, then bet on oil. If your thesis for owning junk bonds is that oil is going back to $70, buy oil!

Gundlach’s point is that high yield funds like the SPDR Barclays High Yield Bond ETF (JNK) and iShares iBoxx USD High Yield Bond Corporate ETF (HYG) carry all of the downside of lower oil prices, without any of the upside.

I’ll even take it a step further – high yield funds probably need a bounce in oil back to $50 or higher to merely support their current payouts. JNK and HYG pay 6.6% and 6% respectively today – good yields until you consider each issue lost twice as much over the last 6 months! 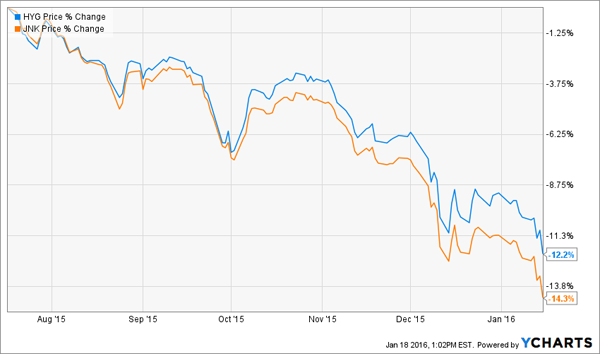 JNK itself entered 2015 with 17% exposure to energy – a death sentence. And looking forward, investors in these funds are at the mercy of dumb computer algorithms. With no active managers to step in and use common sense, these funds continue to pick up energy debt that’s plentiful and looks safe – if you’re using old oil projections.

HYG still holds nearly 10% energy debt. And it has another 6% in the financial sector – firms that also funded the recent drilling binge!

16% of HYG in Jeopardy Between Energy and Finance 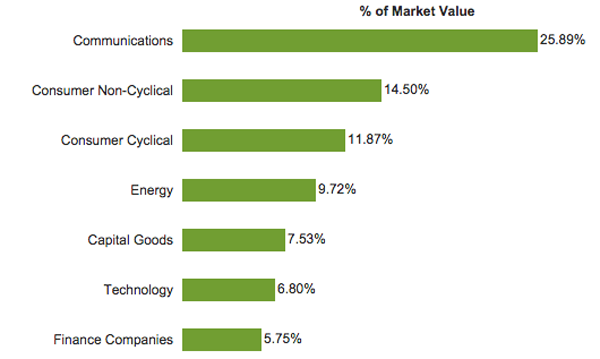 And Finance is Seriously Exposed

JPMorgan Chase (JPM) CEO Jamie Dimon admitted last week that an extended period of $30 oil might cost the bank up to $750 million in defaults. That’s not particularly devastating for a bank that made $24.4 billion in profits last year. But JPM was more responsible than many of its rivals in the energy sector, making 60% of its loans to investment grade borrowers.

Business development companies (BDCs) in particular could be in serious trouble. These are publicly traded companies that build and manage portfolios of investments. They use leverage and chase high yields to generate profits and dividends for their investors – a good strategy when times are good, a dangerous one at times like these.

Last month I warned you about Prospect Capital (PSEC) and its big stated yield. The company is still paying the big 1.4% monthly dividend, but the stock is more than 11% lower since my piece. Nine days ago, Wells Fargo saw things from my perspective and downgraded PSEC to underperform on concerns that the company was overvaluing some of its assets.

The stock is indeed dirt cheap on paper, trading at just 59% of its net asset value (NAV). In theory, this means you’re buying $1 worth of assets for just $0.59. And historically, you’d have done very well buying PSEC and other BDCs at big discounts to NAV.

NAVs are updated quarterly by third-party auditors, so there is some legitimate basis to these numbers. Of course, oil has tanked since the last NAV report – so the NAVs are likely generous across the board, especially so for BDCs most exposed to energy.

To Prospect’s credit, oil and gas investments only make up 3.6% of the company’s portfolio – roughly half the industry average. Gladstone Capital (GLAD) and Pennant Park Investment (PNNT), on the other hand, have 15% and 12% exposure respectively. And investors can’t get away fast enough…

These BDCs Got Crushed Since Our December Warning 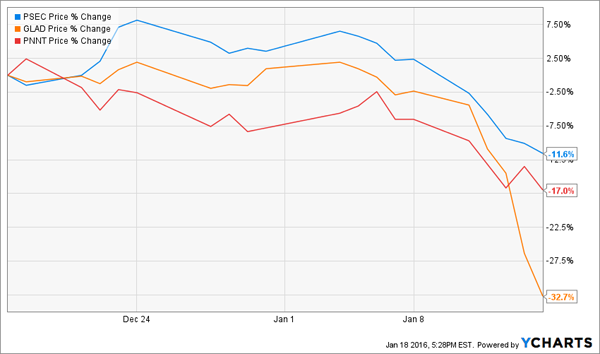 GLAD and PNNT are also trading at massive 40% discounts to their net asset values (NAV). In theory, their oil and gas investments could go to zero and you could still buy them at a 20%+ discount.

Except that GLAD, for one, has leveraged itself into a corner. The BDC is dangerously close to the 1:1 debt-to-equity limit imposed on these firms. To solve this, it’s asking shareholders to let the firm issue more equity. This means it’s going to dilute them when it should instead be scrambling to repurchase its own shares at a 40% discount!

PSEC is a better play than GLAD and PNNT – but the broader problem is these firms all make money using financial wizardry. So they’ve all got exposure elsewhere, and they tend not to perform well when high yield gets trashed. I’d wait until the NAVs are updated in February before you consider a potential contrarian BDC buy

As Gundlach said, if you want to bet on oil, bet on oil. Exxon Mobil (XOM) is the best positioned of the bunch, with a 3.7% dividend that’s well supported by earnings (Exxon sports the lowest payout ratio in big oil at 61%).

But until energy prices stabilize, I’m avoiding the energy sector altogether – including high yield funds and BDCs. Instead, I’m raking in much bigger – and safer – yields in another sector that’s capitalizing on the biggest demographic shift in U.S. history.

You see, no matter how long oil stays at $30, there’s one sure economic bet in America: The country will be older in the future than it is now and demand for healthcare services is set to skyrocket.

In fact, by 2024, national healthcare expenditures are expected to climb to $5.43 trillion, that’s about 20% of our GDP.

They pay yields of 6.5%, 7.5%, and 8.2%, and all three are increasing earnings and their dividends annually. Click here for the names of all three and discover exactly how we’re playing the biggest demographic shift in U.S. history.