The fat yields on business development companies (BDCs) just got even fatter.  Many annualized yields are now north of 10%, but that’s not thanks to a surge in payouts. Rather, it’s a byproduct of plummeting prices.

BDCs loan money to private companies. Many of the loans are floating rates, so the recent rate hike wasn’t the issue. Investors’ broader concern – and reason why many BDC stocks crashed by more than their annual dividend in a week’s time – is borrower risk.

Regular readers know we’ve been keeping an eye on the free-fall in high yield bonds. Of late, that’s accelerated.

High Yield Gets Smacked Down 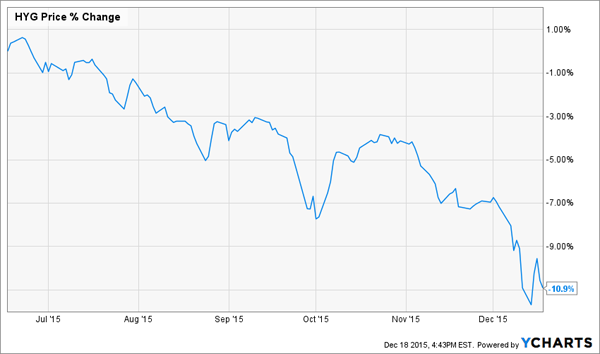 High yield panics have a way of cascading (see: 2007) – so investors have again sent BDC share prices cascading down accordingly.

But not all BDCs are created equal, of course. Each firm relies on its own financial wizardry to generate returns. And each strategy has its own risk, which of course can vary depending on the current economic environment.

But The Riskiest Pay The Highest Yields

First-level investors tend to flock to the riskiest BDCs, because they have the highest stated yields. Unfortunately, they usually have achieved this the “wrong way” – with a tumbling stock price.

A high stated yield is not necessarily a death sentence. It means the fundamentals should be considered with a second-level mindset. Why is the yield so high, and is there something everyone else is missing? Let’s take a look five big BDC payers – and I’ll show you when, historically, you’d have done well buying these issues.

Prospect Capital (PSEC) pays a gaudy 15.9% yield today and sells for a steep 34% discount to its Net Asset Value (NAV). This means you can buy the stock for one-third less than you’d be able to purchase all of its underlying assets.

Historically a simple contrarian strategy of buying PSEC on extreme dips on its price versus book value (the proxy for NAV) has been a profitable one. And PSEC hasn’t traded this cheap since the stock market lows in March 2009.

Extreme Lows in Price-To-Book Have Been Good Entries 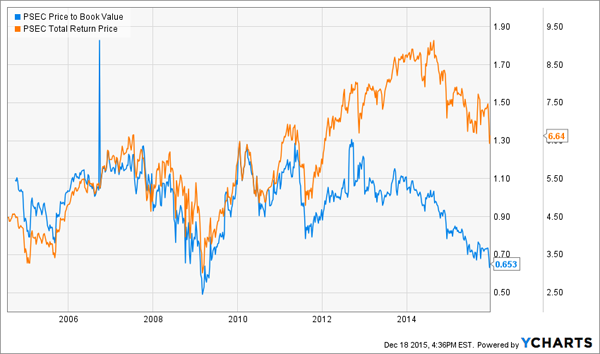 To senior management’s credit, they’ve purchased 360,000 PSEC shares for their own personal accounts over the last two weeks, investing over $3.3 million of their own money in the process.

If you believe the high yield market is going to hold together, then Prospect is an interesting speculation. Now you’ll never make sense of the 131 portfolio investments the company holds, which range from food to software to aerospace. When you go long, you’re betting on management. But it’s a wager you’re getting at a sizeable discount today.

Medley Capital (MCC) isn’t far behind with a 15.1% yield. But despite the high payout, the company hasn’t really made its shareholders any money over the last five years (though neither has PSEC, for that matter…) 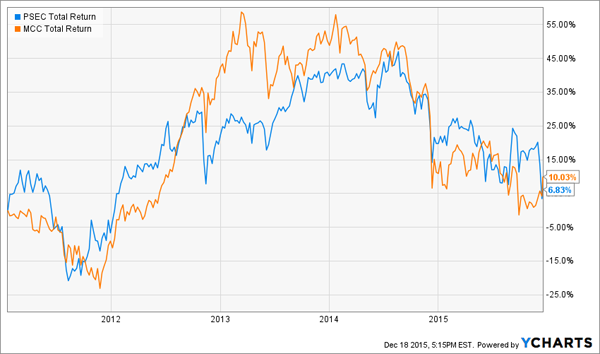 A “bigger loser” is Fifth Street Finance (FSC), which posted a total return of negative 15.7% over this five-year period. The only time you’d have done well buying FSC was back in 2008, when shares were trading hands for less than half book value.

Today, it’s at 67% of book value. A good speculation here? Perhaps – provided FSC is not heading towards 50% of book first. Unfortunately it doesn’t really control that – the credit market does.

It’s been the same story for BDCs Ares Capital (ARCC) and Main Street Capital (MAIN). You want to buy them when they’re really cheap with respect to book value, and hold them through the rest of the credit cycle (reinvesting the big dividends ideally).

These firms haven’t been on sale like this since 2009. We’re not at those discount levels, at least not yet, which means that shares could go from cheap to even cheaper.

If you don’t actually need the dividends as income for the next three to five years, these BDCs are interesting speculations today. The key, however, is your time horizon. To make a calculated contrarian play work, you’ll want to buy these issues, continue to buy, and reinvest your dividends until the credit cycle (hopefully) plays itself out.

Of course, there’s the risk that these firms wouldn’t survive another 2008-level crisis or worse. So if you need income today, then why not instead purchase payers that don’t live and die on high yield debt and financial heroics?

For current dividend hunters, I prefer investing in a sector that’s guaranteed to grow in the years and decades ahead – healthcare. There are 10,000 baby boomers retiring every day, and they’re spending a large portion of their average $640,000 net worth on their own health.

The three companies I like best are direct plays on the boomers’ new spending pattern. They pay yields of 6.7%, 7.4%, and 7.8% today. And all three companies are increasing earnings and their dividends annually. Anyone who buys today will see a 10%+ yield on their initial capital in just a few years.

This is the best time to buy them, at the height of interest rate panic. Click here and I’ll share the name and ticker from each, along with the unique system that I used to uncover them.