This Popular Dividend Stock Could Fall Hard in 2016

Many investors see dividend aristocrat McDonald’s Corp. (MCD) as a slam-dunk for big gains and another hike in 2016. Too bad – like many dividend growth disciples, betting on what they see in the rearview mirror.

Year-to-date, MCD has been piping hot: it’s surged 26% in 2015, good for the second-strongest rise among Dow components, behind only Nike Inc. (NKE). But I’m concerned McDonald’s could give back much of that gain in 2016.

A Big Bet on Breakfast

It’s worth noting that MCD didn’t make much headway until late October, when it reported third-quarter earnings per share (EPS) of $1.40, up from $1.09 a year earlier and ahead of the Street’s forecast of $1.27. Revenue also topped expectations (though it was down from a year ago), helped by US same-store sales that rose for the first time in two years—a modest 0.9%.

What got less play is the fact that the company was up against a weak year-ago quarter, in which earnings slumped 28% on tough domestic competition and worries about expired meat from a supplier in China.

Investors Pay Up for MCD 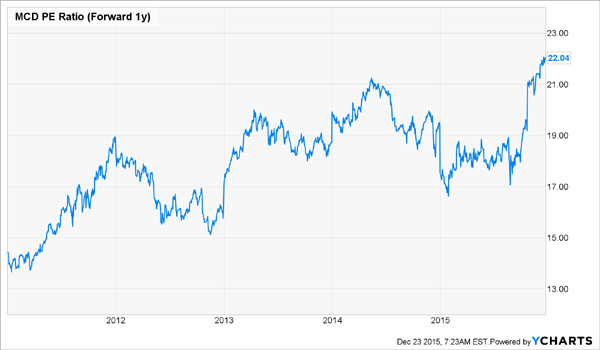 Can the stock justify such a valuation? From where I sit, it’s hard to see how.

For one, a lot of the latest hype surrounds the chain’s October launch of its all-day breakfast menu in the US. Undoubtedly, the move has potential, and early signs show it’s bringing in new and lapsed customers: according to a study by NPD Group, nearly a third of all-day breakfast buyers hadn’t darkened their local McD’s door in the preceding month.

But the competition isn’t sitting on its hands: Taco Bell, owned by Yum! Brands, Inc. (YUM), jumped into the breakfast game in the spring of 2014 and now gets 6% of its sales from these items. And Starbucks Corp. (SBUX) has seen its breakfast sandwich business double in the past three years, according to management.

That’s to say nothing of the healthy-eating trend that’s been nibbling at McDonald’s sales for years. In March, the chain said it would start using antibiotic-free chicken and milk from cows that haven’t been treated with artificial growth hormones. And in September, McDonald’s announced it would switch to eggs from chickens not kept in cages over the next decade.

But the Golden Arches is still well behind the curve. After all, so-called “fast-casual” competitors like Panera Bread Co. (PNRA), Shake Shack (SHAK) and Chipotle Mexican Grill (CMG) have been serving up antibiotic- and hormone-free fare, as well as customizable “build-your-own” menu options, for years.

That’s translated into strong growth for the category: according to figures from research firm Technomic, fast-casual restaurants collectively saw a 12.8% sales increase in 2014, nearly doubling the next-largest segment’s growth rate. And despite the E. coli crisis at Chipotle, that trend is unlikely to be derailed as the aging population grows more health-conscious.

McDonald’s is also vulnerable to the strong greenback, which will only shoot higher if the Fed keeps raising rates in 2016, as I expect it to. In the latest quarter, 67% of its sales came from outside the US, and exchange rates shaved $0.17 from EPS.

Dividend Hikes on the Downslope

My take: investors are making a big gamble on the fast food giant’s latest turnaround plan, but one good quarter does not a trend make. And if its dividend hikes slow further, the stock price could get fried.

That’s why you’re far better off investing in another stock I’ve discovered that hands you a rock-solid 7.3% yield—or more than double the 3.0% you’ll get from McDonald’s.

And unlike McDonald’s, whose profits can be easily blindsided by fickle consumers, tainted meat scares and cutthroat competition, this company is locked into a market that will only grow in the years ahead: skilled nursing care for the nation’s 77 million aging baby boomers.

This is also THE best time to buy it, at the height of the hysterical “interest rate panic.” As this subsides, its stock price will be bid up—which means its fat yield will be bid down. Click here and I’ll share the name and ticker, along with the unique system I used to uncover it.