You can take it to the bank: the zero-interest rate era will soon be dead.

That’s bad news if you have a hefty credit card balance, but it’s terrific if you invest in bank stocks. And now is a great time to do so.

That’s not just my opinion. Some of the country’s smartest investors—including Warren Buffett himself (see below)—share it. They’ve bulked up their bank holdings lately, and it doesn’t take a stock-market genius to connect that to a rate hike the market sees as 78% certain at the Federal Reserve’s December 16 meeting.

Let’s be honest, a one-off, quarter-point increase won’t mean much for bank profits. Luckily (for bank investors), that’s not likely to be the case. Goldman Sachs (GS), for example, feels the economy is strong enough to handle more; it’s forecasting a quarter-point rise in each quarter of 2016.

That’s enough to put a nice lift under bank profits, and where earnings go, share prices follow. (Even better if banks can juice their per-share profits by repurchasing their own stock, as we’ll see in a moment.)

Plus, after six years of zero interest rates and $150 billion in fines tied to the financial crisis, the sector is a veritable bargain bin. Bank of America (BAC), for example, trades at just 79% of book value—or less than the value of its assets if it were broken up and sold today. Citigroup (C) also trades for less than 80% of book.

But the big banks are dizzyingly complex and notoriously tough to value, so how do you find the best ones?

Below are three big banks America’s savviest investors have loaded up on in the run-up to the Fed’s move. All three are doing a lot of things right, including raising their dividends, buying back shares (particularly now, when they’re cheap) and maintaining healthy payout ratios (the key to keeping those rewards coming).

If you ask investors what the biggest holding in Berkshire Hathaway’s stock portfolio is, many would likely say Coca-Cola (KO). It certainly gets the most ink, thanks to Uncle Warren’s infamous four-Coke-a-day diet and the fact that he’s held the stock so long he’s yielding nearly 50% on his initial investment.

But the truth is, Buffett’s $17.1-billion Coke stake is Berkshire’s second-biggest position—and a distant second at that. In first, at $24.0 billion, or 22.2% of the portfolio, is Wells Fargo & Co. (WFC). In the first quarter of 2015, Buffett added roughly $380 million to that mammoth stake.

When Buffett throws that much cash at a company, it’s worth taking notice. And it’s easy to see what he likes about the biggest US bank by market cap.

Wells has aced the Federal Reserve’s annual stress tests (designed to see how effectively banks would cope with another financial crisis), which has given it the green light to hike its dividend and boost buybacks.

Since the financial crisis, Wells has increased its quarterly payout by 650%, to $0.375. It boasts a decent 2.7% current yield and a payout ratio (or percentage of earnings paid out as dividends) of just 38%, making that dividend as safe as a bank vault.

Meantime, Wells is one of the biggest buyback spenders in the S&P 500, devoting $9.7 billion to repurchases in the last 12 months. Here’s how that’s reduced the number of shares outstanding: 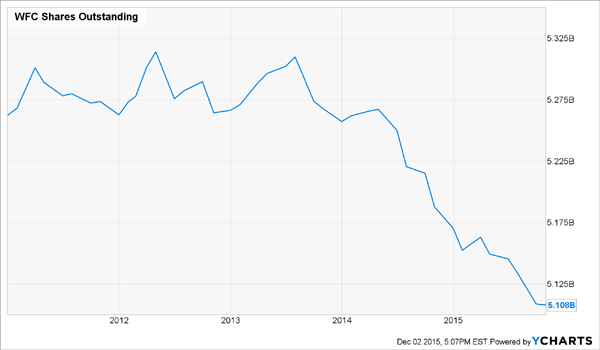 The bank’s price-to-book ratio is higher than many of its competitors’, at 165%, but that reflects its strong potential as interest rates rise: Wells has more loans on the books than any other bank—and generates more interest income as a result.

Bank of New York Mellon (BK) is also getting a lot of attention from big-name investors. That includes Buffett but also David Einhorn, head of Greenlight Capital, who upped his stake by 1,108% in Q2. Nelson Peltz is also a fan: his Trian Fund Management hedge fund held a $1.2-billion interest at the end of Q3.

I’m a dividend investor, so I’m unimpressed with BNY Mellon’s 1.6% yield and the fact that it hasn’t raised its payout since early 2014. But it scores points for buybacks, having cut its shares outstanding by nearly 14% since the end of 2010.

In March, the bank got the Fed’s blessing to return $3.8 billion to investors in the following 12 months, up sharply from $2.5 billion in the previous period. BNY Mellon aims to buy back more shares in 2016, but we’ll have to wait till March, and the results of the next stress test, to see what its plans are.

Meantime, activist involvement bodes well for the stock: according to Bloomberg data, companies targeted by activists posted average gains of 48% from 2009 through 2013, topping the S&P 500 by 17 percentage points.

US Bancorp: The Efficiency Leader

Back to Buffett: his second-biggest bank investment is US Bancorp (USB), the portfolio’s ninth-largest holding. There’s also a clear bullish trend here: Berkshire upped its USB stake by 4% in Q1 and another 1% in Q2.

So what does Buffett see in USB? The same thing I do: a hyper-efficient bank with a long history of lining shareholders’ pockets.

Consider USB’s efficiency ratio, a key metric in the banking business that measures the percentage of revenue devoted to operating costs. US Bancorp ended Q3 with a 53.9% ratio, edging out Wells Fargo at 56.7%. Others, such as JPMorgan Chase (JPM), Bank of America (BAC) and BNY Mellon, fell in the 66% to 70% range.

That high efficiency has kept USB’s profits climbing steadily since the financial crisis, fueling some hefty payouts to shareholders. 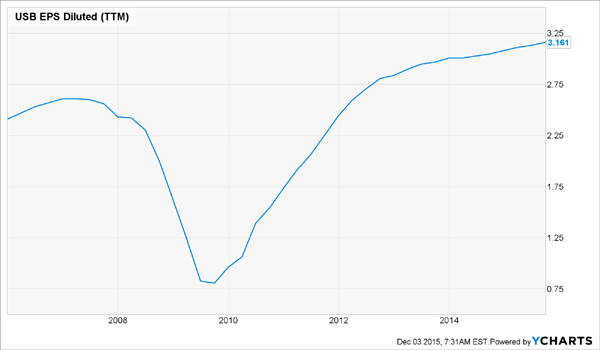 Consider this: since late 2010, USB has boosted its quarterly dividend by 410%, while simultaneously taking 9.8% of its outstanding shares off the market.

Let’s put that another way, so you can see how growth like that plays out. Say you bought USB on March 6, 2009, when it bottomed out at $8.82. Today, you’d be yielding a tidy 11.6% on that investment, compared to the stock’s current yield of 2.3%. And there’s a lot more where that came from: USB pays out just 34.2% of its earnings as dividends, leaving plenty of room for more hikes.

What’s more, CEO Richard Davis has indicated he’ll watch that efficiency ratio like a hawk. If rates don’t rise soon, he said in September, he won’t hesitate to cut jobs to keep costs in line.

But odds are, Davis will get his wish, and higher rates will goose the bank’s profits—and the size of investors’ dividend checks.

As much as I like these three big banks as solid plays on rising interest rates, I actually like three smaller banks even better for 2016. If Buffett could buy them, I’m sure he would—but they’re too small for him to deploy a meaningful amount of capital. That’s unfortunate for him, but great for us.

These small banks literally have an extra $794 million they’ll be shoveling back to shareholders starting in January. All three will buy back so many shares they’ll easily achieve double-digit earnings per share (EPS) growth—which will lead to stock gains of 15 to 20% or more in the next twelve months.

Why do these banks have so much extra money—and how do I know it’s going to be paid back to shareholders starting next month? Click here for the backstory on these “heavily overcapitalized” small banks and my three favorite plays.