3 Stocks Buffett Wishes He Could Buy

On Monday, we reviewed Warren Buffett’s favorite bank stocks. No surprise, they’re all large caps – Uncle Warren has to invest a lot of money for any returns to matter, after all.

His “problem” of having too much cash to deploy is not one that keeps me up at night. But Buffett did once famously say that he’d earn 50% per year investing in smaller companies if he were only managing a few million bucks. So let’s talk about the banks he’d love to buy if he could.

Most sub-behemoth banks have relatively straightforward business models – focused on banking, of all things. They borrow short and lend long. Higher interest rates are going to help their profits, because the banks will be able to loan out their cash to customers at higher rates.

The stock prices of these companies – and any firms, really – can do anything in the short term, but over the long run, they tend to follow earnings growth. Most investors know this – but there’s a small yet critical nuance they miss when chasing rising profits.

As a shareholder, what really matters to you is that earnings per share (EPS) go up year-after-year. 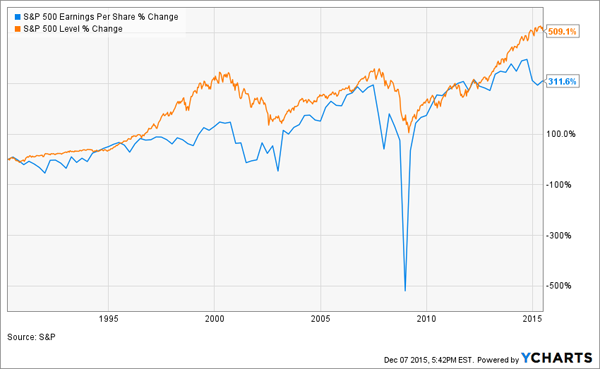 Higher interest rates will help banks generate higher earnings. And some banks will be able to further “juice” their EPS numbers by using their excess profits to buy back own stock. Fewer shares outstanding relative to the same earnings means EPS will increase even faster – as will the stock price.

This technique tends to work the best when shares are cheap. Book value is a popular valuation measure for banks because most of their assets and liabilities are market to market.

It’s often thought of as the bank’s approximate liquidation value. And the measure is applicable to insurance companies, too – Uncle Warren always repeats that he’s a buyer of his own Berkshire Hathaway (BRK-A, BRK-B) stock at 1.2-times book value.

Here are three banks trading for even less than Buffett’s bargain marker. All three will be repurchasing their own stock aggressively in 2016.

KeyCorp (KEY) trades for less than 1.1-times book value, its cheapest since 2013. From April 2012 to today, the company has reduced its share count by 12.4%. That’s helped power the stock to a 70% total return over the same time period. 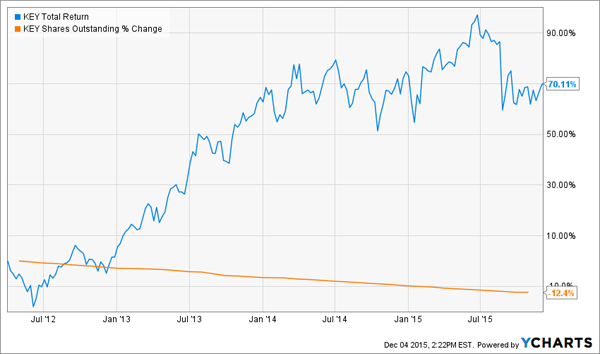 Management is in the midst of a $725 million buyback program, though it’s hitting the pause button temporarily while it closes its recent acquisition of First Niagara Financial Group (FNFG). This deal should pay for itself in a few years, as management anticipates $2.8 billion (or 67% of the deal price) will be realized in cost savings alone.

I don’t expect the buyback program to stay on the shelf for long. And the company also plans to boost its current 2.3% dividend by 13% in 2016.

SunTrust Banks (STI) has repurchased 5% of its outstanding shares since the start of 2014. That’s helped power a 25% increase in the stock price over that two-year period. 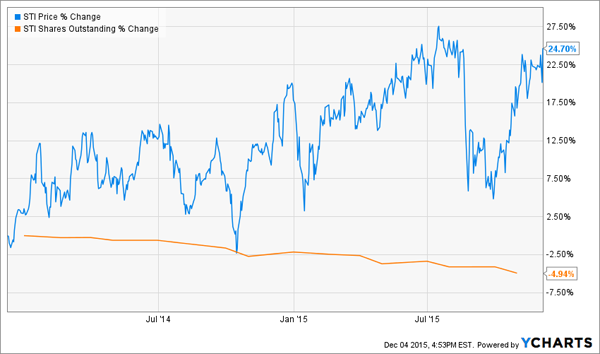 SunTrust is working through an $875 million share repurchase program (3.9% of its current market cap), which it’ll wrap up by mid-2016. Management is getting a lot of bang for its repurchase buck, with shares trading at just book value.

Last year, the company announced the current repurchase program in March, along with a 20% dividend increase. I expect we’ll see a similar announcement this March – which means now is the time to buy. And you’ll get paid to wait – shares yield 2.2% today.

Fifth Third Bancorp (FITB) is another serial-repurchaser of its own stock. It’s taken 13.6% of its shares off the market since 2012, helping propel a 68% increase in its stock price. 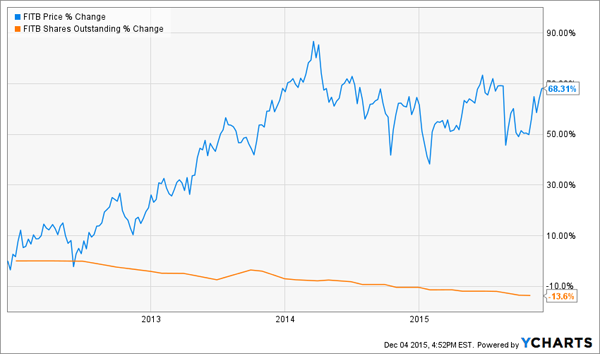 Like SunTrust, Fifth Third tends to release its capital plan in March. Last year it announced its current $765 million share repurchase plan (4.6% of shares outstanding), which runs through Q2 2016. It’s a good use of capital, with shares trading just above 1.1-times book.

This spring, I expect management will re-up its buyback program and increase its dividend, which is up 44% in four years. Shares yield 2.5% today.

As much as I like these mid-cap banks for 2016, I love three small-cap banks even more. Believe it or not, they literally need to “get rid” of an extra $794 million starting in January.

The reason is that all three recently converted their corporate structure. This left them as “overcapitalized” – which actually means they have too much money.

There’s an easy way for them to solve that problem – return the cash to shareholders in the form of buybacks and dividends. But an SEC rule prohibits banks from buying back their own stock within twelve months of the corporate change. So, they had to sit patiently on their $794 million pile of cash – until now.

In January, the SEC limit is up, and these three banks will start buying back their own shares like crazy. I expect their currently-cheap shares will soar by 20% or more in 2016. Click here for the full backstory – along with the names and tickers of my 3 favorite plays.