The move sent his stock up over 13% on the day. It also boosted Las Vegas Sands (LVS), MGM Resorts (MGM), and Melco Crown Entertainment (MPEL).

His purchase might be an indication that the industry isn’t as busted as many have thought.

The Casino industry has had a tough year. The industry’s golden goose –Asian gambling Mecca Macau – was seriously hurt by Chinese travel and currency restrictions from June 2014. From a peak of $45.1 billion in 2013, revenue has plunged to $22 billion year-to-date (YTD) in 2015. Casino operators have been forced to cut costs and increase their operating efficiency or else.

Making matters worse, many of these same companies had pinned their hopes and budgets to the success of Macau after Las Vegas hit tough times. What was supposed to be a cash cow in their portfolios turned into a resource drain.

One of my favorite investment strategies – and one of the most consistent long-term – involves buying deeply unpopular stocks paying healthy dividends. I love to hear an industry has been left for dead when there are clear signs that it hasn’t.

Steve Wynn just gave us a ray of hope. But there are other bright spots as well.

Macau gross revenue continues to slide in YTD comparisons, but it appears to have found a bottom already. Meanwhile operators have grown more efficient and have diversified into other forms entertainment.

Take a look at the chart below… 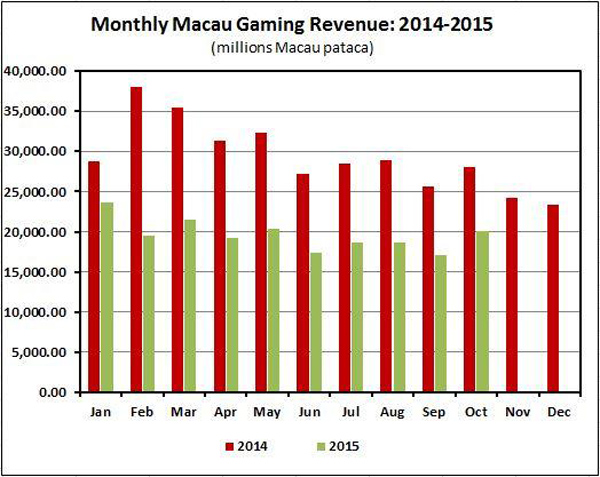 While revenue is clearly off from last year, it has leveled off since January. Unfortunately year-over-year comparisons, especially those in the peak month of February, will give the appearance than Macau is still in decline.

And this isn’t the first time Macau has had a revenue recession. From 2008 to 2010, as the global recession combined with swine flu fears and Chinese Visa restrictions, the gaming industry saw a similar contraction in Macau. 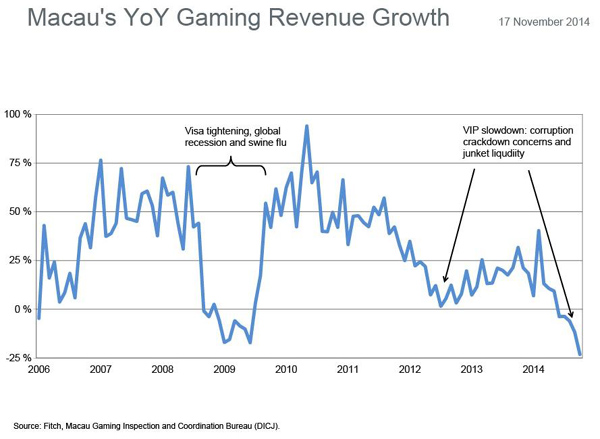 Its other silver lining can be found in the Asian economies that have rejected or postponed plans to create legalized gaming zones as well. Japan’s Congress recently announced it would be focusing on higher priority legislation.

Instead of Japan, South Korea, Thailand and the Philippines adding their own regional competitors, Macau remains the best gambling hotspot in Asia.

Unfortunately, there will always be fears that the fickle Chinese government might issue new guidelines that could either supercharge recovery or put the kibosh on the entire center. The reality is that communist party officials want Macau to grow and prosper as much as its corporate stakeholders do.

Macau is transitioning from a gold rush frontier to a more stable tourism and entertainment destination. It is still the world’s largest casino gambling jurisdiction on the planet. Macau’s recovery will be slow and take time, but it will happen.

So are there any casinos that might make sense for income investors looking for deep value?

From its highs in 2014, Wynn Resorts plunged over 75% until it hit a bottom in September. At first glance, Steve Wynn’s investment might be a sign to go all in. But upon closer investigation the stock still doesn’t look like a solid bet. It trades at over 36.6-times current earnings and 20.3-times forward earnings.

Even after losing more than 60% this year, the stock still only delivers a yield of 2.9%. Not exactly headline material considering some of the 6%+ dividend payers I have in our Contrarian Income Report portfolio.

I wrote about Wynn earlier this year when the company was paying out more in dividends than it earned per share. It’s still at it – WYNN’s $2.00 dividend per share is just over the current EPS of $1.91.

When Wynn cut the dividend 67% on April 28, he told investors that it’d be “foolish to issue dividends on borrowed money.” Unfortunately, he’s still doing exactly that.

I’m always cautious around firms that cut their dividends, and more so on those that pay out more than they take in.

It’s why I continue to count WYNN as a speculative investment. I like a greater degree of safety and a much more substantial yield than 2.9%. If you like speculation and gambling, WYNN’s guidance for next year’s EPS is for $3.45.

MGM bears discussing solely because it’s one of the big three Casino operators in the states… and not much more. The company has negative earnings per share and trades at 33.3-times forward earnings. The chart is an erratic mess and it pays no dividends for an income investor to get interested in.

Despite this, for speculative growth investors, MGM is still one of the best pure Las Vegas plays. With 27% of all hotel rooms and a host of entertainment venues – including a possible NHL team – the company is tied to the long-term success of Sin City.

MGM Resorts saw its leverage limited during the financial crisis and wasn’t able to benefit from the Macau expansion as its competitors did. In many ways it still hasn’t recovered.

Its fortunes are tied to domestic gambling and entertainment. Either way, I’m staying clear of this risky bet.

Of the big three, Las Vegas Sands has the best balance sheets, the best exposure to Asia and Macau’s success, and most importantly the best dividend. LVS trades at 15.7 times earnings, and distributes a $2.60 dividend yielding 6%.

Las Vegas Sands has one of the most diverse visitor bases in Macau; catering to the low, middle, and high ends. Not just in Macau though, LVS has a diverse client base and global operations.

Las Vegas Sands proverbial ace could rest within Asia’s most compelling economy: Singapore. The company has one of the two licenses in that country – the other belongs to Malaysian firm Genting Singapore (G13).

While Singapore saw declines this year, the outlook for the country is bright. Singapore combines location, demographics, and wealth.

Las Vegas Sands may be the best bet in a challenging Casino group. This industry group meets our needs for underappreciated stocks paying dividends, however there is simply too much risk for the average investor to take right now – especially with so many other income investments available.

Specifically, I like three healthcare stocks that are paying secure 6.7%, 7.3%, and 7.9% yields respectively today. They’re capitalizing on the biggest demographic shift in U.S. history – 77 million baby boomers that have just started retiring.

Why waste time speculating on casino stocks when the bull market in Americans getting older is guaranteed to run for two or three more decades? The 65+ populations will double over the next 3 decades, while the 85+ population will triple. These are the best “pure plays” on this unstoppable trend – and they’re paying an average of 7.3%. Click here and I’ll share the details on these companies with you along with the “second-level” analysis I used to uncover them.